I attended Intel’s analyst and press conference yesterday at Mobile World Congress in Barcelona where Intel made a wide range of announcements ranging from low-end smartphone SoCs to telco datacenter equipment strategic moves. Given Intel’s recent 10-15% tablet market share grab in 2014, open disclosures over their massive mobile investments at their financial analyst day, strategic deals with Chines SoC makers and moves in the telco datacenter, the audience was very interested in what Intel had to say.

As Intel’s diverse product lines continue to grow, get more competitive and intersect with each other, the company is looking for ways to make their mobile parts more recognizable to consumers and protect positioning for the higher-end, more profitable PC parts. In the past, Intel’s Atom chips have carried the Atom branding followed by N or Z and a three or four digit number to denote the model of Atom processor. Right ahead of MWC 2015, Intel announced their plan to rebrand The Atom Z series branding and break it down into Atom x3, x5 and x7 in a similar naming scheme that their Core brand of processors have with the Core i3, Core i5 and Core i7, with 7 being the fastest. Atom x5 and x7, formerly Cherry Trail was officially announced, too. Intel also announced their latest Category 10 LTE modem in the Intel 7360 modem series with 3x carrier aggregation and 450 Mbps speeds. Intel is also harnessing some of their experience in security and enterprise to strengthen their mobile plays in order to drive differentiation and more chip sales. 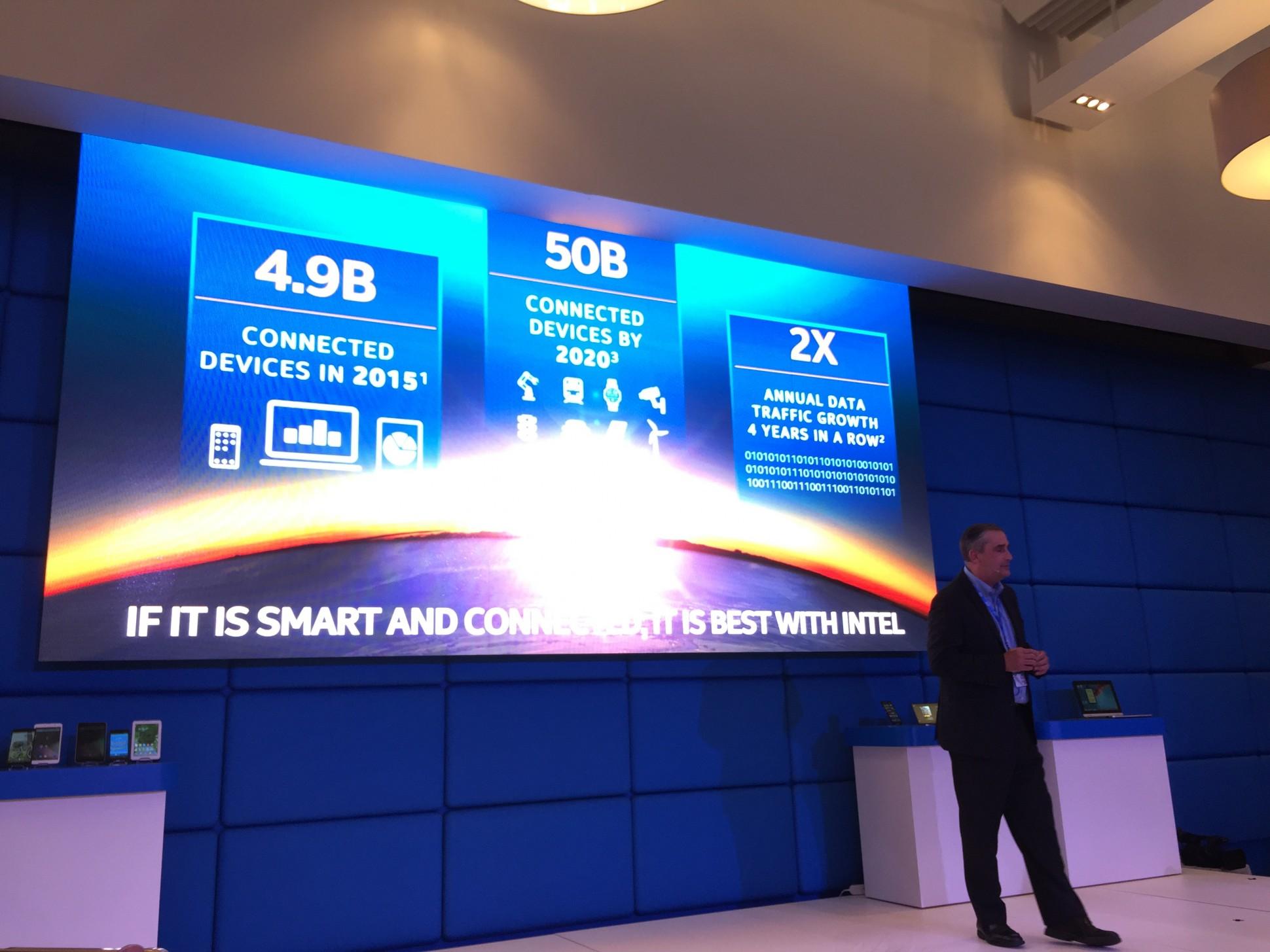 With the new Atom x3, x5 and x7, Intel is announcing a multitude of new features. First and foremost, the Intel Atom x3 (formerly SoFIA) will be Intel’s first chip with LTE integration, something that only Intel SoFIA had with a very low-end Atom part and 3G only. This was mostly deemed as a somewhat dated part as many devices nowadays support LTE out of the box. So, it comes as little surprise that with the Intel x3, they are once again introducing an integrated modem, except this time it will be LTE CAT 4 with potential future support for CAT 6 LTE. Interesting, Intel is not using their own GPU nor their common license for mobile GPUs, Imagination with PowerVR. Interesingly, the GPU they’re using is actually Intel’s biggest competitor in the mobile space, ARM Holdings. This is certainly a different world under the pragmatic CEO, Brian Krzanich, and I applaud Intel rejecting NIH (Not Invented Here) and embracing the optimal technology for the solution. The Atom x3 will come in three flavors, each with different CPU configurations, GPUs, memory support and connectivity.

Intel designed the Atom x3 to be put into phones that are pretty much under $200 in price, with the 3G SKUs being targeted towards the sub-$150 segment, which is pretty great. Intel already has competition from some of their competitors in this segment with phones like the Moto E, which are already $149 and have 4G LTE. The top-end Atom x3 with LTE will also have NFC support as well as an ARM Mali T720 MP2 GPU paired with a 1.4 GHz 64-bit quad core CPU.

Intel has a plethora of partners, mostly in China, that will be building devices with the Atom x3 in them and those should be available in 6-8 weeks from about 20 partners, some of whom are already showing devices on the MWC floor in the dozens. This is partially due to their recent relationships with Chinese SoC companies Spreadtrum and Rockchip.

Intel’s newest Atom x5 and x7 processors are part of Intel’s Cherry Trail 14nm FinFET platform, which is the successor to the 22nm Moorefield. These processors are expected to be even more power-saving than their predecessors and to bring even more performance and I’m looking forward to third party independent device benchmarks to validate this. The improvements are possible thanks to their new CPU cores based on the Airmont architecture as well as new GPUs based on Intel Gen 8 graphics.

In fact, Intel is touting that their newest generation of graphics in their new Atom x7 processors is 2x better in benchmarks like GFXBench and 50% better in 3DMark. Intel already has most of the top PC manufacturers like Dell, Hewlett-Packard, and Lenovo onboard with their Atom x5 and x7 series and expects to have products coming out in the first half of this year. These SoCs are targeted towards tablets and convertible form factors for both Windows and Android, not premium phones. Neither the Atom x5 nor the Atom x7 have any connectivity built-in like the x3 and customers will look to Intel’s XMM 7260/7360 series of modems for 4G LTE connectivity. Now that Intel has between 10-15% tablet market share, I’m really interested to see what they do with a much improved product.

Intel also introduced their latest LTE modem, the XMM 7360. This new modem is capable of the fastest speeds that are currently possible supporting LTE Category 10, which means downlink speeds of up to 450 Mbps with 3x CA (carrier aggregation) of 20 MHz bands. Category 10 also has double the upload of CAT 6 LTE, which could mean upload speeds of up to 100 Mbps. This is an improvement on the XMM 7260 series which were only capable of 2x CA, which limited their modems to a peak speed of 600 Mbps with two 20 MHz bands. Intel doesn’t talk about exactly what process node the XMM 7360 is being built with, but the expectation is that it should at the very least be 28nm, as that is the same as the XMM 7260 series. However, it would not be surprising if they got this down to a die shrink down to 20nm as they do not fab any of the products with modems in their own fabs, SoFIA parts included.

The XMM 7360 also brings support for 29 different LTE bands and 5-mode with LTE TDD/FDD and TD-SCDMA, vital in the massive China market. It will also have support for LTE Broadcast, VoLTE (voice over LTE) and dual-SIM support. It also supports envelope tracking which was already present in the previous versions of Intel’s LTE chipsets. What this really means is that Intel is keeping up with the competition while the rest of the industry lags behind Intel and Qualcomm. Competitively, Qualcomm’s Snapdragon 810 devices are shipping with support LTE CAT 9 while Intel’s timeframe for the XMM 7360 is the second half of this year and it still a discrete modem and not integrated into their Atom x5 or x7 SoCs.

Intel security inside the Samsung Galaxy S6 and LG Urbane

Intel also announced that their Intel (formerly McAfee) mobile security would be shipping in Samsung’s new Galaxy S6 and Galaxy S6 edge smartphones, creating an additional protection for users in this increasingly insecure world. I need to dig deeper into exactly what it protects and how it does it, but nonetheless, this is a big win for Intel. Intel technology is literally inside every Samsung Galaxy 6. Intel also announced that they would be on LG’s Urbane smartwatch which will be shipping McAfee on LG smartphones in the near future. Yes, unfortunately we live in a world where we need protection in our watches.

Getting data center wins with the telcos

Intel has been on a multi-year strategy to break into telcos by offering a more open, less expensive and more capable architecture. Their first major partnerships were with the telco equipment giants Alcatel Lucent, Ericsson and Huawei. They are going to be powering the server and virtualization benefits of Intel’s Xeon processors to Alcatel Lucent’s radio access networks. Meanwhile, Intel’s Xeon processors will also be helping Ericsson deploy their cloud infrastructure and optimize and scale its resources appropriately. Also, similar to Ericsson, Huawei will also be using Intel’s Xeon processors for their cloud server deployments to help them transform their datacenter for the new and more demanding network with ever increasing cloud-enabled devices. This may also be a way for Intel to strengthen their brand with the carriers who will be buying this equipment but may not be buying devices with their chips quite yet. Intel’s success with the telco equipment providers and telcos will easily get them CEO meetings with the telcos. And Intel-based handsets will surely be on the agenda. 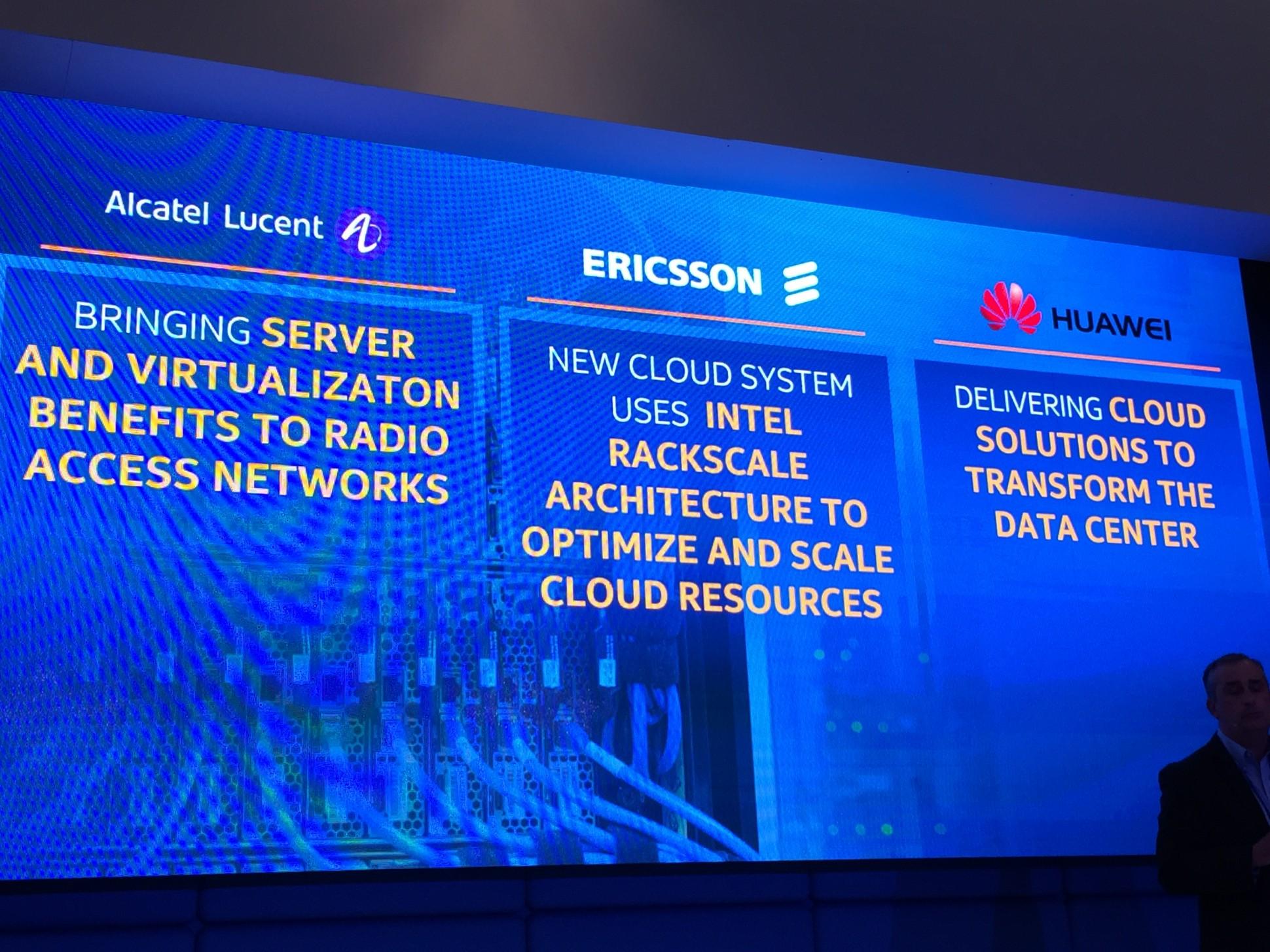 Intel’s newest line of Atom SoCs and modems show that the company is continuing to push forward in their mobile business and that they are taking it very seriously. They don’t want to just be present, they want to win. It will obviously take some time for us to find out how successful Intel has been with their newest 14nm SoCs and SoFIA chips, but that shouldn’t be too far away. Intel is keeping up on modem technology, but hasn’t been focused to integrate their own modems into their highest-end processors and even more importantly their highest-end SoCs into phones and phablets that ship in volume. Intel needs to be successful in tablets and smartphones if they want their mobile division to be profitable. The mobile game is a numbers game and you need to ship in volume to make money.

At the end of Intel’s analyst and press conference, I also asked Intel’s CEO, Brian Krzanich, about their future mobile strategy and whether they would apply their approach in their tablet strategy to smartphones. Brian’s answer was that they don’t think they will be spending money on their smartphone strategy like they did with investments on the tablet goal of 40 million tablets. Intel, and Brian believes that the market is mature enough and when they bring differentiated, cost-optimized products to market where they win designs on the quality and performance of their product, they will throw their axe into the sea and declare a unit target. This signal’s Intel’s own confidence in their own product and their processor and process technology to help them compete in the mobile space.

It’s hard to believe the progress Intel has made in mobility over the 12 months. My expectation is that we will see a lot of these things develop over the course of this year, which means we may be looking at Intel very differently around this time next year.