Microsoft is a company not traditionally known for its PC hardware systems prowess, but the company’s Windows Devices Group has been working feverishly for four years to change that. Microsoft already created a new device category with the Surface Pro line of tablets, which I recently observed after four months of use. The first few years of Surface were rough for Microsoft, but this new category is part of the new bright spot in the PC space which includes convertibles and detachables according to data from IDC’s latest Q4 2015 report. The Surface Book is a very unique approach to this category as it appears first and foremost as a notebook before being a tablet, unlike the Surface Pro 4. I attended the October 2015 event where both devices were launched, have been using the Surface Book since December and want to provide some observations on it. Surface Book is truly a design achievement and Microsoft deserves kudos for it. 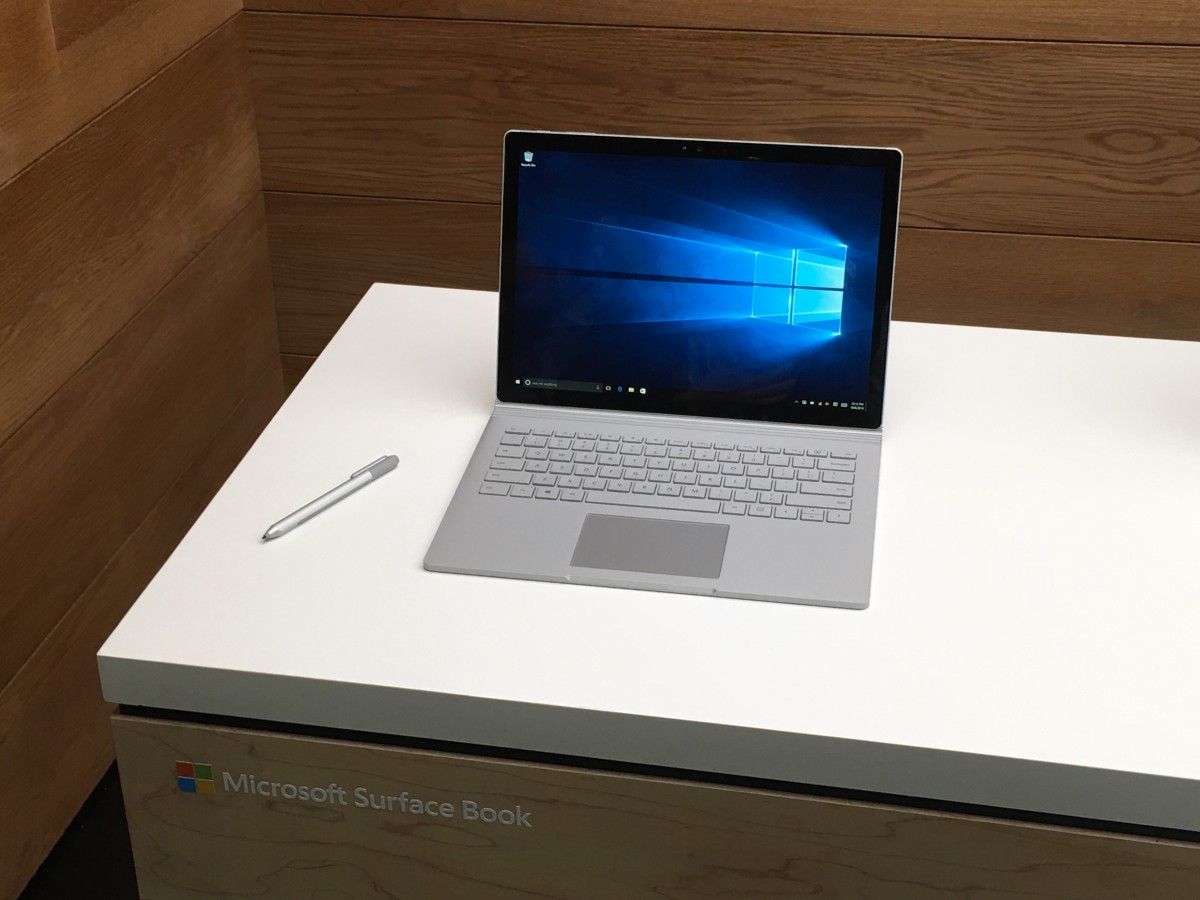 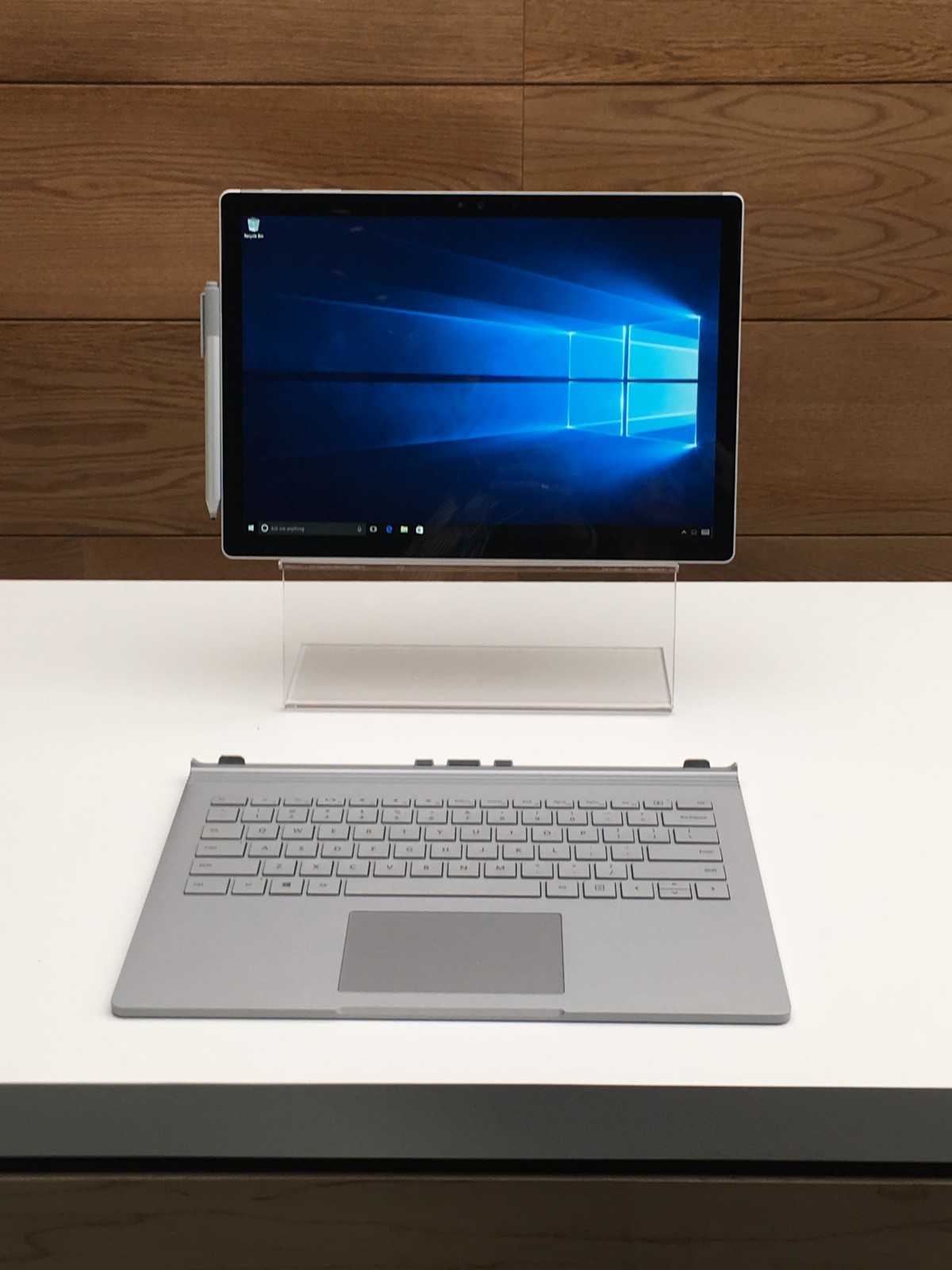 The Surface Book has solid specs across the board in addition to the extreme thinness and modularity. The 13.5” PixelSense display has a resolution of 3,000 x 2,000 (267 PPI) maintaining Microsoft’s almost obsessive 3:2 aspect ratio which they focus on to promote a more document-friendly desktop workspace. This display, like many of other Microsoft products has 10-point multi-touch which means this Surface Book can easily be used as a tablet without any limitations and can also be used as a touch notebook as well.

This display is powered by both Intel integrated 520 graphics and the optional discrete 1GB NVIDIA 940M GPU depending on the model. The model Microsoft let me use had discrete NVIDIA graphics. All versions of the Surface Book that come with the 6th Generation Intel Core i7 processor come with the NVIDIA GPU with one Intel Core i5 model coming with the discrete GPU. 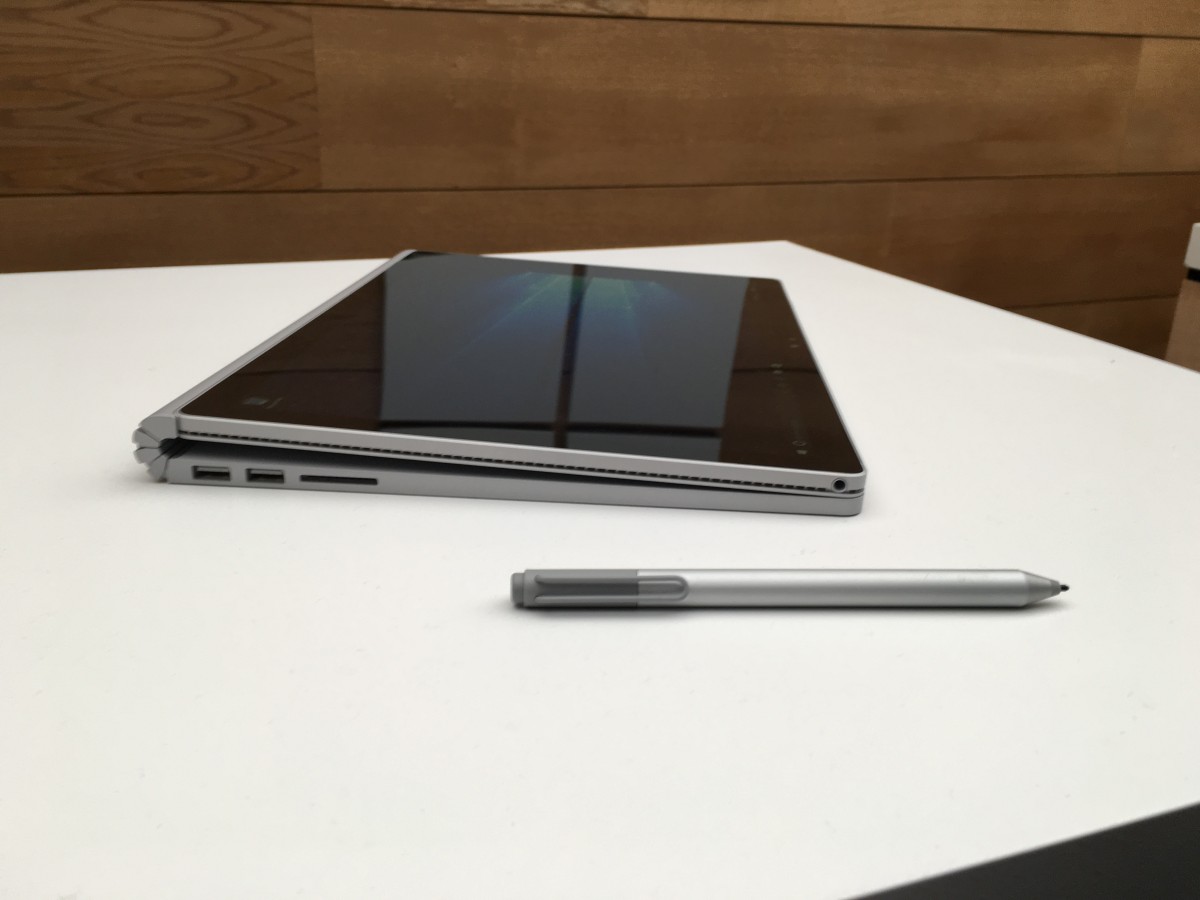 The Surface Book also packs up to 16GB of RAM and up to a 1TB SSD all of which are relatively quite high density to older PCs thanks to the new DDR4 RAM and NVMe SSD technologies. These technologies also allow the Surface Book to pack so much performance and capacity without adding much to thickness at all. Microsoft also fitted it with the latest in terms of connectivity with 802.11ac Wi-Fi as well as BT 4.0 connectivity.

Microsoft also added a 1080P front-facing camera. This is really important to anyone who does videoconferencing like me. In fact, I need a 1080P front-facing cameras to do my CNBC World interviews over Skype. Not everyone does interviews like that but it is very important when it comes to personal or business communications. Too many designs cheap out with a 720P camera.

There were a lot of things about the Surface Book that I liked that put it in the top tier of devices I have recently used. The case is made of magnesium which is unique, light and looks very premium.

The Surface Book is extremely versatile as it can serve as a notebook, functions as a large tablet, portable clipboard, what Microsoft calls a “creative canvas” and much more. The Windows Hello face login works extremely well and like I said about the Surface Pro 4, I quite frankly don’t know how I lived without it before.

With the keyboard attached the Surface Book is fully “lappable” without tipping over on a desk thanks to the ‘magic hinge’ that Microsoft spent so much time designing and perfecting. I never got the feeling the hinge was too large, but it’s the price you pay for modularity and ironically fit the palm of my hand better when carrying it. Surface Book also has a nice giant glass trackpad from Synaptics and is bigger than the one on the Surface Pro 4. The spaces between keys are much better and the keys themselves are backlit well, too. 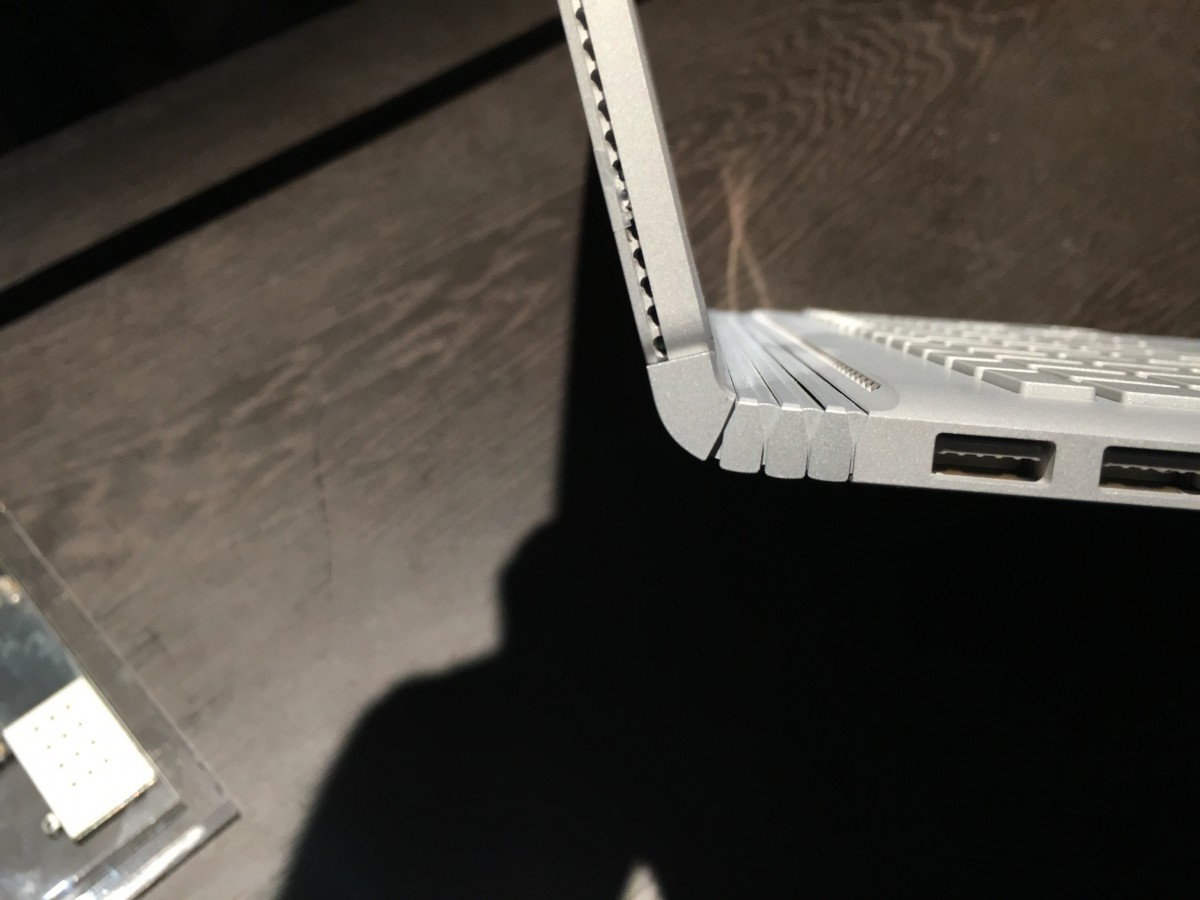 I’m not a huge user of the pen functionality, but when I did, it was good, but still had a bit of latency, which I’m sure Microsoft will work on and improve. The eraser on the back of the pen as I said before is brilliant. All pens need the eraser on the back. Just in the past few weeks, the Office team provided a tool to move my Evernote notes over to OneNote which I believe will translate into using the pen a whole lot more.

Dock into a desktop

The Surface Book also has a great dock which makes desktop modularity extremely easy. The dock has GigE, two 4K-capable miniDP connectors, audio and four USB 3.0 ports. This dock is also shared with the Surface Pro 4, so if you have either or both devices you can use the same dock. Microsoft continues the modularity focus even with their charger, which provides good charge time and has a built-in USB port for mobile device charging as well. 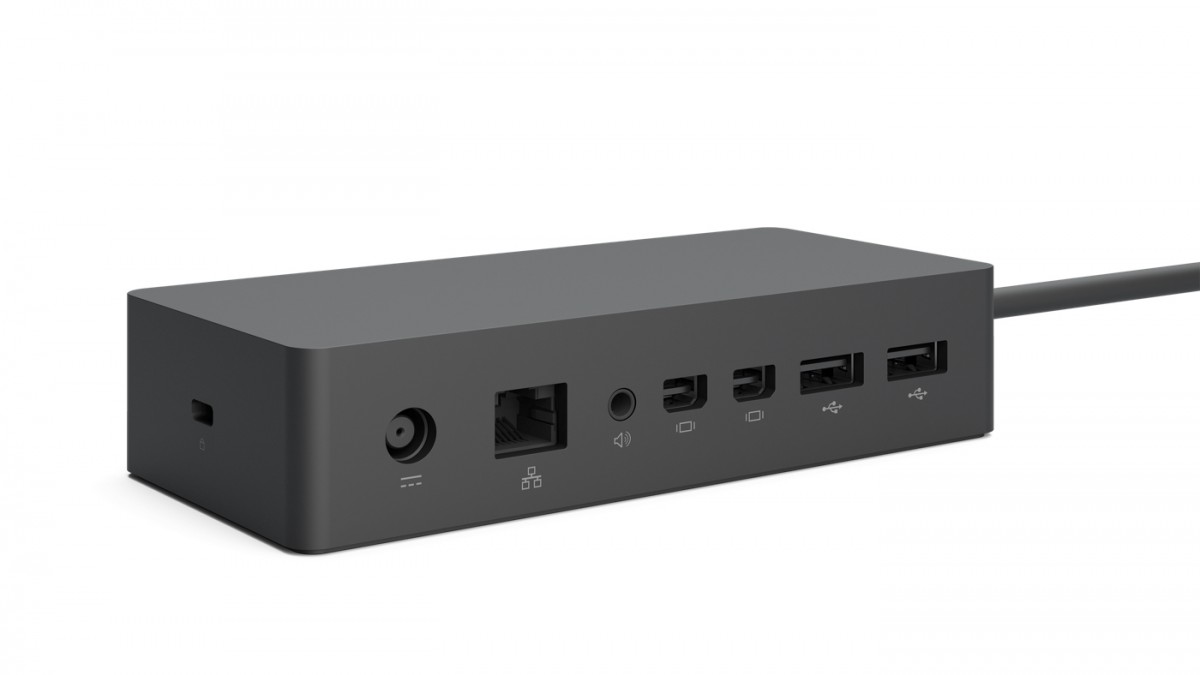 The fan rarely came on after the indexing of Microsoft Office 365, Cortana and OneDrive were complete, making it an extremely quiet device. This was really surprising given just how thin the device was and that it had an Intel Core i7, even thinner than the Surface Pro 4 which is absolutely astounding. A fanless version with the Core m3, m5 and m7 would have been nice as well, but not required. A fanless version could have made Surface Book even thinner, which blows my mind.

There are few perfect products and I experienced shortcomings early on with the Surface Book, albeit some of them being pretty minor and others more major. Like many, I experienced driver challenges with the sleep/wake state of the Surface Book as well as with its graphics and dock drivers. It had more driver issues than the Surface Pro 4 with most of the issues only being addressed recently.

The driver issues were so hit or miss that they were frankly hard to quantify or measure but they are well documented. I also was not too excited with the battery life and got just over 6 hours of office productivity use and the battery life was still shorter than my expectations after the new firmware update. Microsoft was first with Skylake and these are issues that came with it. It took longer for Microsoft to address them than others, but I’m glad they are nearly resolved.

I’d like for Microsoft to continue improving battery life and dock to multi-monitor interaction.

Some things about the Surface Book I would have changed were pretty minor but could be room for improvement with the next iteration. I would have preferred USB-C and Thunderbolt 3 over dock backward compatibility rather than the proprietary dock. However, the Surface Book was literally months ahead of other competing Skylake products and many still don’t even have Thunderbolt 3 docks. And none are actually shipping. 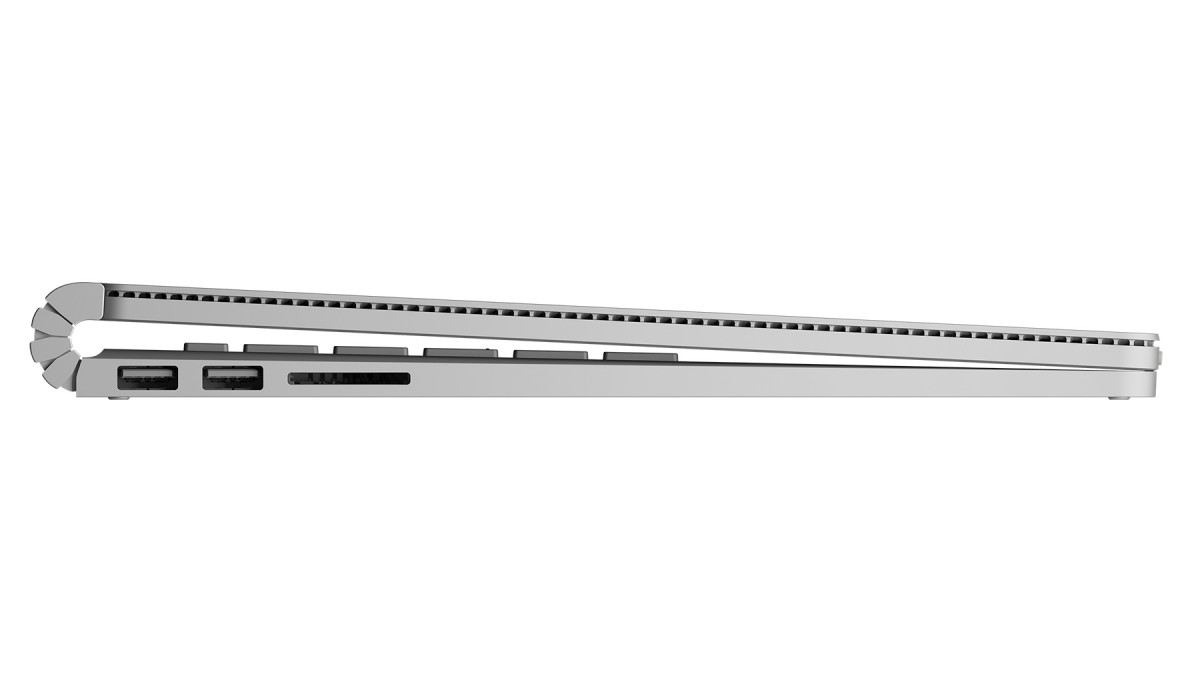 The connectivity also left me wanting for more, having something like 802.11 AD Wi-Fi or even LTE would have been a nice adder as it’s hard to have a credible tablet without WAN. AD isn’t natively supported in Windows yet, but it should be in the next major revision. Again, if you wanted to hit the launch date before holiday, these were good trade-offs.

The Microsoft Surface Book is an incredibly interesting and unique entry into the PC category and broke new ground in modularity. Microsoft is doing some really unique and innovative things with the Surface Book and does most of them pretty well, further adding more choice within the detachable category. Microsoft beat everyone else getting out with SkyLake and hit the late holiday seasons, however, Microsoft seems to have stumbled a bit on the software side of things and just recently resolved most the issues.

I can recommend to anyone looking for a premium consumer notebook to place Surface Book in their consideration set. For some it will be really hard to be able to discern the difference between the convertible Surface Book and a laptop, which may have been Microsoft’s objective all along. The tablet functionality is the best Windows effort I’ve seen, too, which is really surprising. Nice job Microsoft.