Microsoft has made strong progress with Windows 10 and more is needed to guarantee long-term success beyond commercial and consumer PCs, detachables and XBOX One. This isn’t some revelation or criticism, just an observation. Eventually, Windows 10 must make its way into volume smartphones, consumer tablets, wearables, cars and home automation. I attended the BUILD conference in San Francisco last week and as you would expect, it was focused on helping Microsoft’s most loyal developers and potentially new ones understand the state of Windows 10 and the future of the Windows Platform.

As it stands right now, Windows 10 already has over 270 million active users, 5 billion store visits, marking what Microsoft calls the fastest windows adoption rate ever. This impressive number is helped significantly by the free upgrade for users running legacy operating systems like Windows 7 and Windows 8/8.1. Over 270 million active users is impressive and Microsoft still has a long way to go with Windows 10 to reach iOS’s 1 billion active users and Android’s over 2 billion. Microsoft’s own goal is to have 1 billion Windows 10 users by 2018, which is a pretty ambitious goal, but attainable as long as Microsoft can start to convert key platforms to Windows 10 and see growth in others like smartphones. 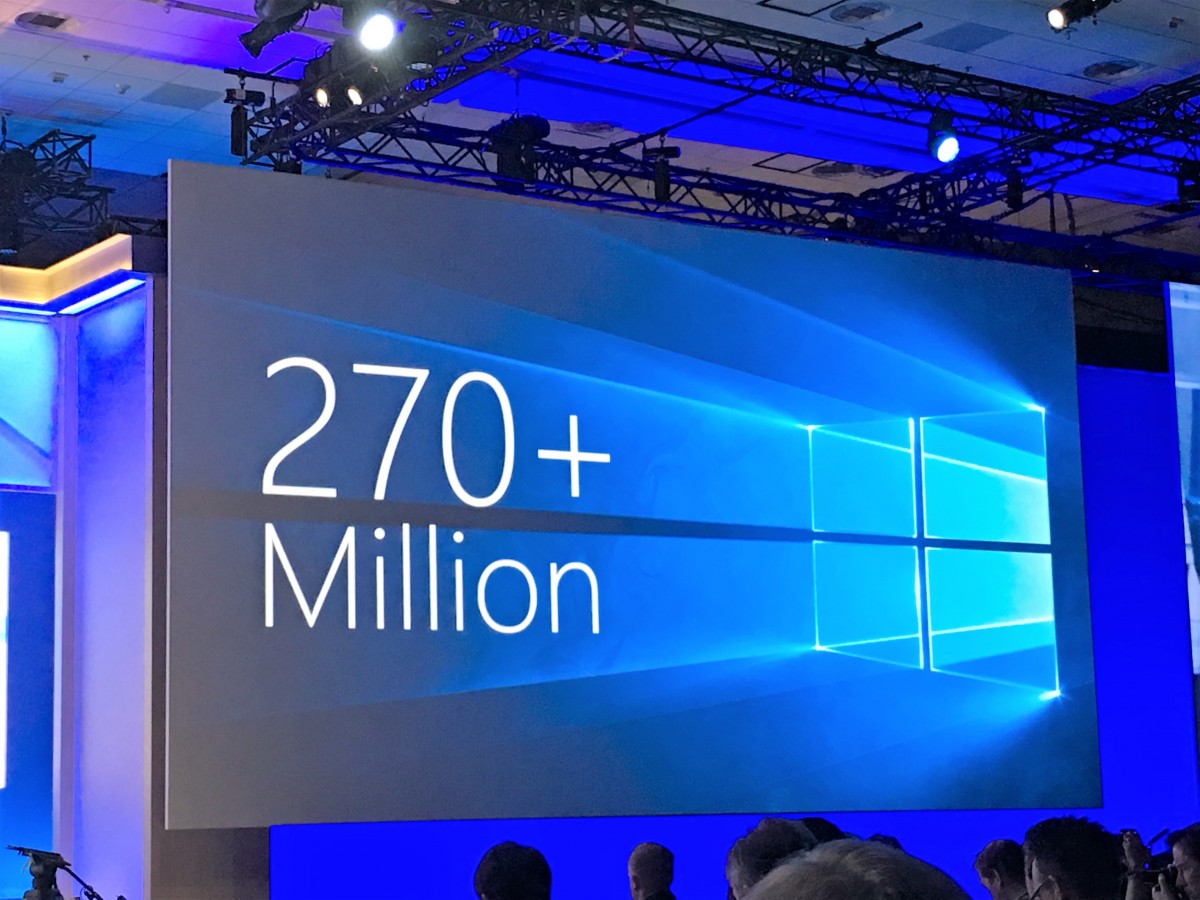 In addition to Windows 10 already being a well-received operating system, Microsoft is making some major updates to the OS as a part of the first anniversary of the OS’ launch in July. The “Anniversary Update” of Windows 10 will bring things that focus on the “pen, presence and voice”.

One of the biggest improvements to Windows 10 will be the presence of Windows Hello everywhere which amounts to the use of secure and easy biometric authentication within applications. Right now, Windows Hello only works for login capabilities, but with this new update applications like Microsoft Edge will be able to support easy biometric authentication to all the supporting sites. This means that anyone using Windows 10 across all their devices can expect enterprise-grade security on all of their devices, something that no other platform can say.

The Anniversary Update to Windows 10 also brings a new feature dubbed ‘Inking’ which allows users to write on their devices to write on their devices as they would on paper. This means the creation of sticky notes, drawing on a whiteboard and easily sharing “analog thoughts in the digital world”. This is part of Microsoft’s strategy to put the pen front and center so that users know how to use it and what benefits they have of using a pen. Microsoft is looking for ways to create solutions using the pen to help solve tasks that people are reaching for pen and paper most even with a computer in front of them.

Windows Ink is more than just the ability to write things on screen, it is designed as a deeper platform that enables more fluid ink flow throughout the entire Windows experience. Microsoft’s vision and what they showed at build with Windows Ink could convert someone like me that isn’t really a pen person. I was very impressed by the demos and if it’s as easy as that, I could stop making excuses why I don’t use pen.

Because the Anniversary Update is so massive, there are still more features being added to or improved on in Windows 10 in July. One of the features being improved is Cortana, which has seen mixed reviews. New Cortana features will enable users to receive proactive guidance from Cortana throughout the day and to speak with Cortana, even while your device is locked without logging in. This capability mirrors something like what Google has with Google Now, but likely shows Microsoft’s intent that they want to make Cortana accessible everywhere all the time, something that Google Now and Siri don’t have. But Cortana being on all the time also means that privacy activists will likely have another platform to object to with having an always on microphone.

Microsoft didn’t stop with upgrading Cortana, they also added new gaming improvements including UWP games and the ability to turn any retail Xbox One into a dev kit.

The many roads to more UWP apps

Microsoft also talked a bit about the Universal Windows Platform (UWP) as well as legacy applications. At BUILD, Microsoft made it quite clear that Windows 10 can still run XP, Windows 7, Windows 8 and Windows 8.1 apps as well as UWP apps.  This is something some press and analysts forget, but is an important reality. 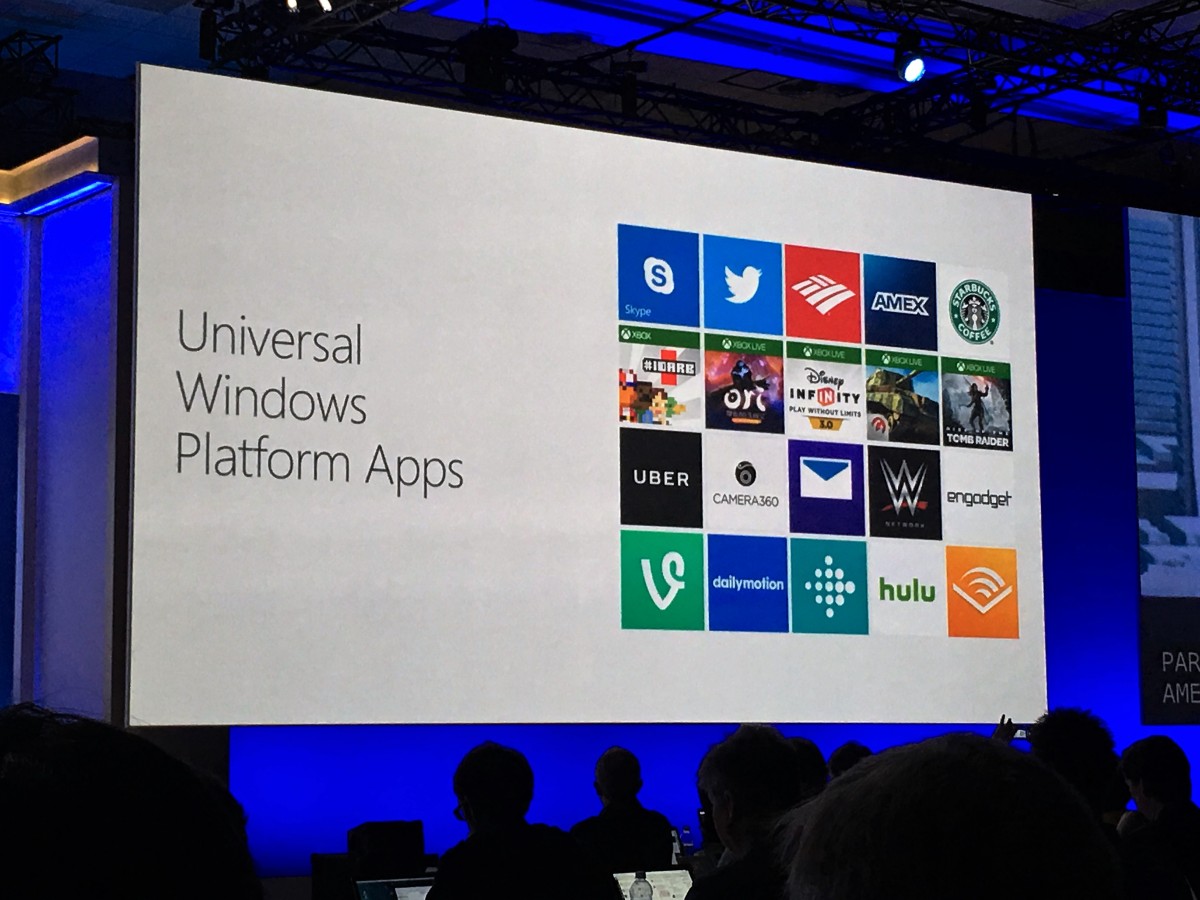 I think we all want more UWP apps right now, but we must all remember that this is really only a year old. Microsoft says the number of new UWP developers is growing month over month with a 60% growth rate, which is extremely encouraging for Microsoft’s UWP applications. There are already new UWP universal apps from Twitter, Uber, King, Disney, Wargaming, Square Enix, Yahoo and WWE. There are also more apps announced coming from the likes of Bank of America, Starbucks, Facebook, Facebook Messenger and Instagram.

The improvements to web app functionality helps web developers like American Express, BBC Sports and others with Windows 10 hosted web apps get direct Windows 10 store access and to launch like a first class Windows 10 application. Microsoft also introduced the bash shell for applications that use workflows that rely on open source command line tools, scripts and other frameworks generally in Linux. In addition to the bash shell, Windows 10 now has support for native Bash with access to the Windows file system and the vast repository of open source command line tools. 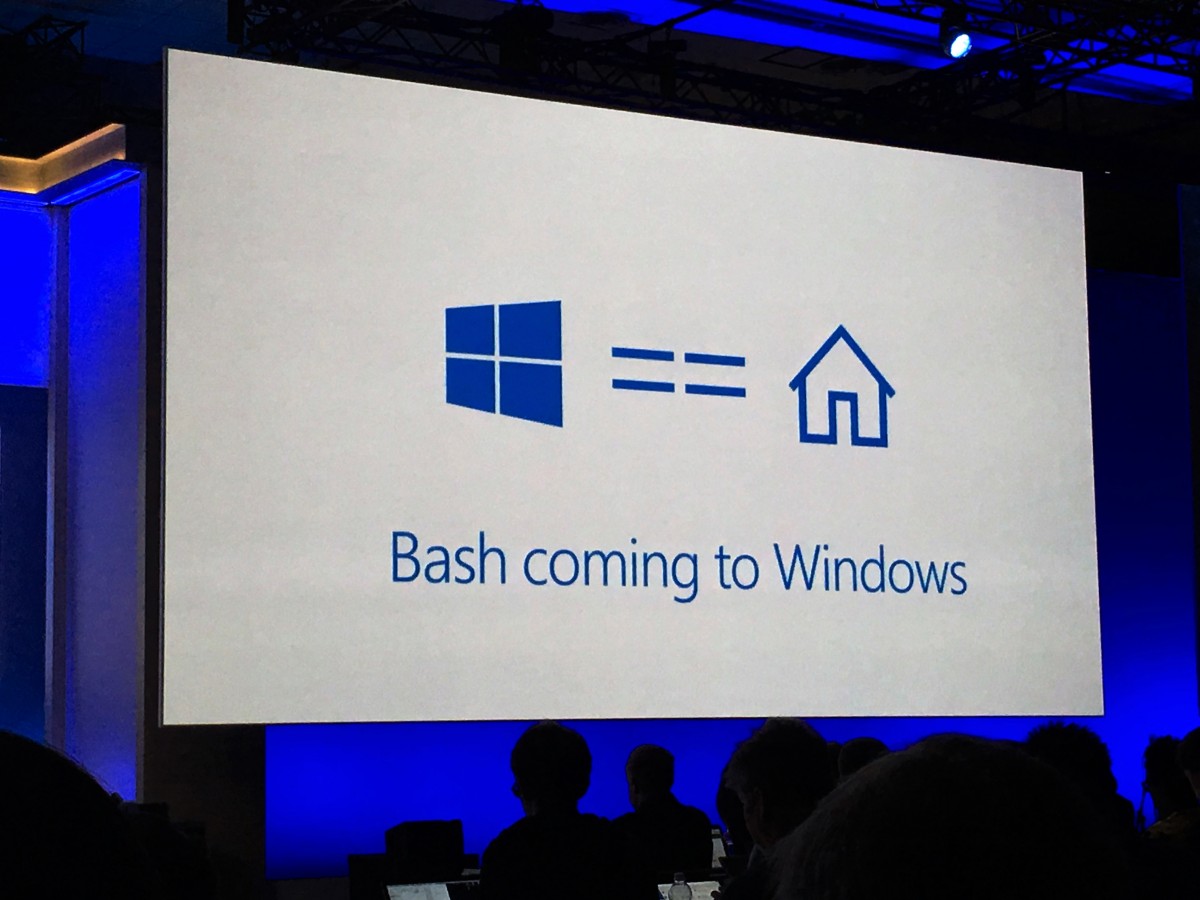 Microsoft also introduced the desktop app converter which takes Win32 and .NET apps and games and converts them to Windows 10 apps dubbed Project Centennial. You can already download this feature and use it on your apps in .MSI or .EXE format and to turn them into UWP applications for Windows 10.

Some more tools that Microsoft announced before BUILD included shipping the Windows Bridge for iOS and the acquisition and integration of Xamarin. The Windows Bridge for iOS is an open-source project created by Microsoft to help iOS developers develop in an Objective-C environment in Visual Studio and support iOS APIs. This tool will also allow developers to port their iOS applications from iOS to Windows 10, which makes objecting to building an application for Windows 10 all the more difficult.

The iOS bridge is already available to developers in a very early version 0.1 preview which just went live last week. This bridge, combined with Xamarin’s development environment that allows for simultaneous Windows, iOS and Android development as well as cloud testing makes developing with Microsoft’s tools much easier and more productive. Microsoft hopes that the more developers use their tools, the higher the chance that they will use them to build Windows 10 applications as well as their standard Android and iOS.

BUILD has shown us a lot of Microsoft’s initiatives to improve Windows and help buoy support for Windows 10 among developers, even if they aren’t developing for Windows right now. But the real question is whether all of these improvements are enough for Microsoft to maintain Windows 10’s growth. Do these improvements do enough long-term to protect commercial PCs and detachables while also growing consumer, smartphones, consumer tablets and wearables? Commercial PCs, detachables, face wearables and console appear to be getting enough attention and improvements.

Consumer PCs are getting an experience uplift from these improvements to Windows 10 but smaller consumer tablets improvements seem unclear. The most unclear categories from this BUILD are smartphones, wrist wearables and home automation, as there was very little that indicated how these would improve with the latest updates. I’m thinking Microsoft is holding back on disclosing any lofty goals in smartphones until something like a “Surface phone” is announced.

I believe that there is a big enough motivation for iOS-only or Android-only commercial developers to migrate to Windows 10. Consumer iOS-only and Android-only isn’t as clear-cut of a case, yet, that is, unless they are games. HoloLens or Xbox could be potential opportunities for Microsoft to pull developers into the Windows 10 ecosystem with those consumers being much more willing to pay for content and get it from the Microsoft curated store.

Another thing to consider……if Microsoft hits their goal of 1 billion active Windows 10 users, developers would be forced to pay attention to the platform and give it near equal attention, which could significantly help Microsoft’s mobile application situation and market position. To boot, each release of Windows is getting more capability, more consumer-friendly, easier to deploy and manage as well as more secure.

When you think about the Windows 8 challenges, Microsoft has come so far and still have far to go to prove the definitive case for Windows everywhere.