Microsoft’s Inspire conference announcements included two significant items related to its Azure cloud computing business. The biggest was the announcement that the Azure Stack offering for private deployment is now ready for order from OEM launch partners Dell EMC, Hewlett Packard Enterprise and Lenovo . The second was a $250M sales and marketing investment in broadening a Microsoft Azure co-sell program for its cloud partners that was piloted last year.

To understand why these announcements could be impactful, it’s worth reviewing Azure’s market position and the biggest strategic levers Microsoft  has to improve it. Azure has emerged strongly over the past few years from a crowded field of entrants chasing market leader Amazon AWS and has taken a clear #2 position in revenue share of the IaaS + PaaS space. Azure’s year-on-year growth rate was 93% in the quarter ended in March, though it is growth on a revenue base I estimate to be still just 25-35% the size of AWS’s greater than $14 billion annual run-rate (based on Gartner’s estimate and Synergy Research Group’s Q1 revenue share data). In a space where there are clear customer community and partner ecosystem network effects typical of a technology platform competition, Microsoft wants to close the market share gap on AWS quickly, as time plays heavily in favor of the market leader.

I see Microsoft as having four top strategic levers for growth in its Azure business via its leadership opportunity in:

While Azure also enjoys some feature advantages, for example, in offering the most globally expansive set of regions and in claiming it has enabled more compliance certifications than any other public cloud, I see these four levers as highest impact long-term.

Let’s walk through each of these starting with those first two that were furthered by the announcements at Inspire.

With the official release of Azure Stack enabling customers to deploy an Azure-based private cloud, Microsoft is now set to benefit from longstanding enterprise demand for better hybrid cloud capability. Survey data consistently shows robust demand for hybrid cloud solutions–with 73% of enterprise cloud adopters working a hybrid cloud strategy in one survey by IDC–because it is ideal to have full flexibility and control over when and how your enterprise deploys and operates each application on public versus private infrastructure from a cost optimization and security / compliance perspective.

Azure Stack is highly differentiated in providing a native hybrid capability across public and private cloud that offers a consistent experience for each of the core cross-cloud capabilities of identity management, resource management / security, compute / data services and development / DevOps tooling. This is not just a first to market advantage. Microsoft is the only leading public cloud provider currently positioned to deliver such an offer since AWS and others are partnering with providers of other software platforms instead of delivering enterprise private cloud capability themselves. 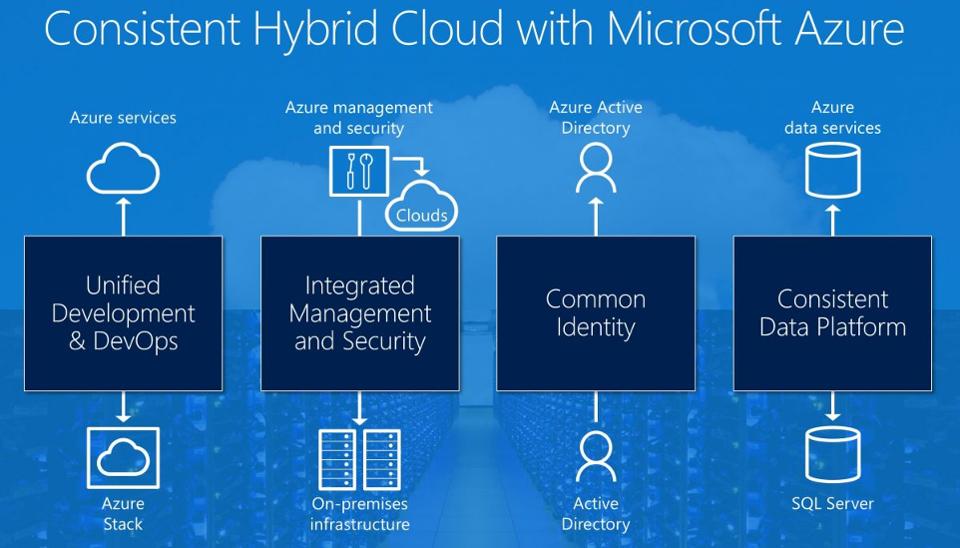 There are existing hybrid cloud services available, but adoption has been limited by a variety of capability limitations, particularly inability for enterprise to run the control services on their own private infrastructure. This is addressed for the first time by a leading provider with Azure Stack. There are expected to be new competing hybrid cloud solutions in market later this year to be used with AWS from delivering hybrid control within OpenShift and VMware delivering its Cloud on AWS. The tradeoff is that their user experience focuses on their individual platforms, so they are not designed to deliver all of the capabilities and same user experience as what AWS already offers itself.

Microsoft is carefully positioning Azure Stack as a private “extension” of public Azure instead of as a private cloud with optional hybrid use. Across the main Azure Stack product pages and the announcement blog post, you will not currently find a single mention of “private cloud”–only “on-premises”. However, its competition certainly includes customer use of a public cloud like Azure with a top existing private cloud option based on VMware or OpenStack. Azure Stack is capable of competing well as the clear leader in hybrid user experience if Microsoft and its partner OEMs and SIs can support it with a competitive cost, scaling, operations and support experience for IT. That is a significant ‘if’ on an offer that, while very strong on paper, is in at least its third rendition after prior false starts and is delivered in an appliance model with hardware configuration constraints that challenges traditional IT flexibility and control of private infrastructure in order to deliver on the hybrid cloud consistency benefits.

Microsoft’s strong OEM, SI and ISV partner ecosystem has not yet been the advantage that it could be for the Azure business as many of these partners have waited to see the business opportunity grow before investing and/or have struggled to staff and train enough expertise to execute. Azure Stack presents opportunity to change that in an OEM channel eager to better capitalize on cloud adoption via private infrastructure sales and sets them up as a powerful sales channel preferring Azure over AWS and the other top providers.

Microsoft’s new partner co-sell program creating roles dedicated to helping partners’ go-to-market and offering compensation to Microsoft sales reps for co-selling is a good step in helping develop and land the partner business opportunity. They must also drive better partner technical education and enablement to scale the cloud expertise necessary to execute. That has been a lingering struggle as is noted in Gartner’s recent IaaS Magic Quadrant comments on Microsoft. Azure Stack offers a boost in the opportunity SIs see for deploying and managing private / hybrid cloud use. Building support from the broad base of ISVs has been an expected challenge as many focused first on AWS’s platform as the biggest opportunity, but this has been improving since Azure emerged as the clear second largest provider.

Microsoft could cut into AWS’s lead in market share if successful in its hybrid cloud and partner ecosystem efforts, but it is tough to envision Azure approaching AWS’s public cloud market share without changing the all too common summary statement of nearly all Azure vs AWS comparisons that says Azure is best for Microsoft technology-based (i.e., Windows / .NET) applications but is not as interesting for Linux / open source technology-based applications. The advent of public cloud has furthered a shift in new application development to open source-based technologies in a way that has been dominant in startups and is taking a stronger hold of new application development in enterprise.

Microsoft has made huge strides in perception on this front based on an extensive company shift to treating Linux and open source technologies as equal citizens on Azure. A few moves from the first half of the year were particularly illustrative of this progress. First was the acquisition of Deis in April to bring in a development team deeply engaged and experienced in building open source components for Kubernetes, the leading container orchestration open source project, which is being very widely adopted and predominantly run on Linux.

Second, Microsoft has been building towards a portfolio of platform services that could be preferred even in a cloud view focused on open source technology-based applications. Amongst the roster of new services and features rolled out for Azure at Microsoft’s Build developer conference in May, the launch of Cosmos DB stood out as a new service with such a strong combination of differentiated features, SLAs and support for top open source project APIs like MongoDB and Gremlin that it could draw open source-focused application developers.

In June 2016, Microsoft said the portion of Azure VMs running Linux grew from 1/4 to 1/3 in the past year. While Linux OS use isn’t an ideal measure of progress in courting developers preferring open source-based tooling, because Microsoft is contributing in top open-source projects like Docker and Kubernetes to add Windows support, it is a reasonable proxy. If Microsoft is successful, Linux share on Azure should grow to top 40-50%.

The emergence of AI and IoT offer a great opportunity for Microsoft to court adoption in areas where past platform perceptions and preferences could take a backseat to which provider offers the best capabilities for new application development. The top cloud providers are all chasing this opportunity and Microsoft is advantaged in the group by having been deeply invested in AI and IoT irrespective of cloud computing in a way that is now offering them a lead in leveraging their broad capability portfolio to attract cloud customers.

Microsoft has made its positioning in these areas a top focus of its Build and Inspire events with its Azure + AI and Intelligent Cloud + Intelligent Edge portfolio positioning. It has delivered a very competitive portfolio furthered by new services announced at Build like Batch AI Training, Video Indexer, Vision and Decision services for AI as well as IoT Edge for deploying and managing edge device AI and analytics for IoT. 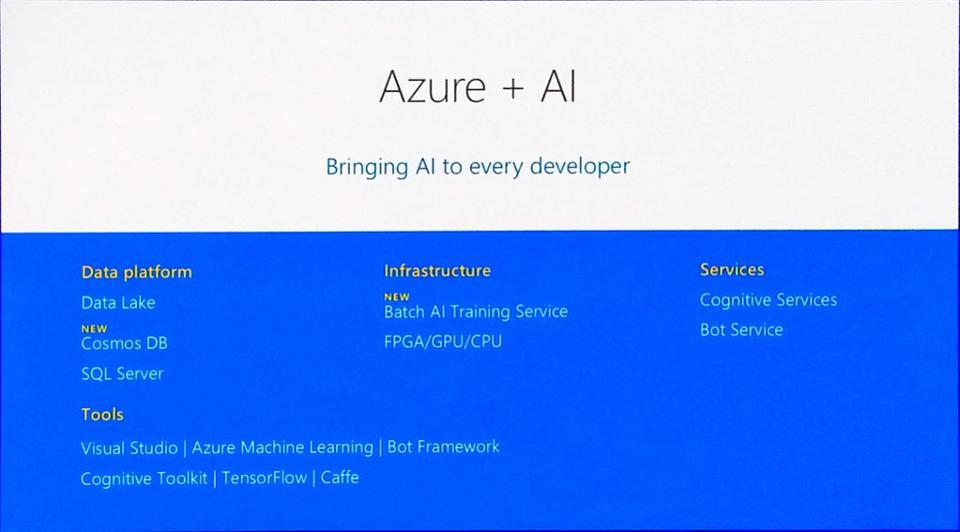 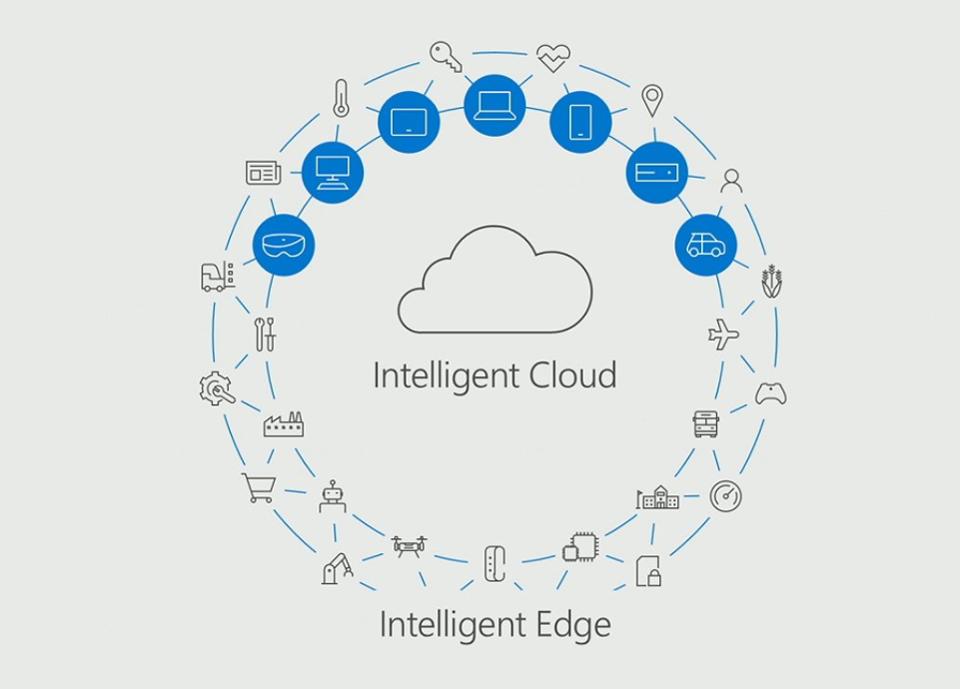 Microsoft is also messaging its normal ‘better together’ positioning of Azure beyond platform services like these into SaaS areas like Office 365 where it combines them all as Intelligent Cloud when reporting revenue results, partner ecosystem size, etc., but I am not seeing the same significance in market leverage there yet as it is unclear to what degree there are enough technical ties to influence Azure adoption beyond bundled pricing.

Big picture, Microsoft has an opportunity to shift its growth into higher gear with these four levers and the sooner it is able to better pull on them for results, the better its likelihood of gaining share and preventing AWS from dominating the public cloud market longer term.