I attended Microsoft’s launch last week for Windows 8, Windows RT, and Surface. While launch day is only one milestone 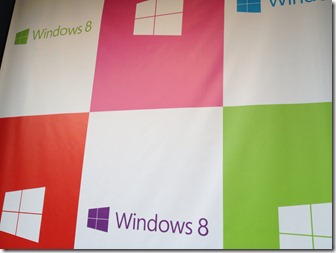 in a string of milestones, launch day is the one day that everything must come together, the day where some make their final judgment. So how did Microsoft do?

Launch days is one day in many important days that a product or service goes through in its lifecycle. I believe it is one of the most important days, though, as it pulls together all the hard work of the previous years into just a few hours. The value of launches differ between consumer and commercial products, too. In the commercial world, buyers like IT managers don’t expect and quite frankly don’t believe that everything would be together on day one. They’re a skeptical bunch, due in part to just how many times they have seen products and services not live up to their promises in the past. Maybe they even lost their job or got reprimanded for making what ended up being a tech mistake that cost their company time or money.

Consumer product launches are different, in that those product and services get measured by press and reviewers based upon what it can do on launch day, not at some point in the future. There are some exceptions that consumers make, where if they trust a brand and they make a future promises the company is believed, but for the most part, what is launched on that one day sticks for a very long time.

One final important piece about launch day is “permanence”. What gets written by press and analysts on launch day is rarely updated if something changes. With most consumers checking out the internet before they buy, this is vitally important. So how did Microsoft do?

Looking holistically at the day, I have to give credit where it is due. Microsoft did a very good job pulling everything together 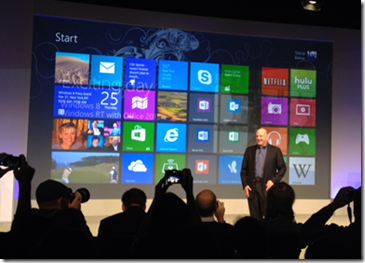 on game day. Microsoft made a good case that Windows 8 was the best Windows yet, good for older and the newest systems. On almost every metric, Microsoft showed that Windows 8 is better than Windows 7. They didn’t address the lack of a Start button or the potential confusion, but I don’t think this was the right place to do that. That is best demonstrated in the marketplace.

The demos were some of the best I’ve ever seen from Microsoft as Mike Angiulo and Julie Larson-Green did their magic. They made a pretty good case for why consumers would want Windows 8, particularly on touch-based devices. I particularly thought they did a good job showing and talking about how Windows 8 works with other Microsoft-based properties. Angiulo and Larsen-Green also did a very good job in showing the absolute breadth of designs supporting Windows 8 and Windows RT. The device onslaught was impressive, from notebooks, to hybrids, tablets, convertible flippers, convertible swivelers, to all in ones. They showed devices from all the big brands at prices ranging from $499 to $2,499.

Steve Ballmer was in rare form too, with a good balance of his famous passion and facts. He was there to put the final stamp on the event by showing just how committed Microsoft is to the Windows 8 ecosystem and experience by outlining just how many Microsoft apps and services have been developed to support a seamless Windows experience.

The launch wasn’t perfect, though.

What I Wanted to Hear More About

Microsoft demonstrated their best launch I have ever seen, but it could have been better, had they made a stronger case on a few items.

I have been a bit critical previously on how Microsoft has handled the rollout of Metro-based apps in the store. Without having enough high-quality apps, Windows 8 could have been compared to the webOS Touchpad or 10” Android tablet ecosystem, which would have been disastrous. Microsoft definitely came through on video streaming services by adding Netflix and Hulu within weeks of launch. They also showed up with many key new site apps, even though CNN is still MIA. What Microsoft missed at launch were key social media apps. While I understand that the People app has some good connections to services, it does not replace a native social media app for Facebook, Twitter, LinkedIn, Pinterest, or Google+. One example is Twitter. I, like many, have Twitter lists they want on their primary start screen. Not a single Metro Twitter app supports this. I would have at least liked for Microsoft to address this head-on and give a date when some of these apps are committed. In Surface reviews, the number of high quality apps was on key criticism in every single one of them. It didn’t have to be like that and was avoidable.

I would have also liked for Microsoft to address any hardware incompatibilities with Windows RT as opposed for users to find out on their own. Microsoft stated that Windows RT “works with 420,000,000 devices” but how do I know if that one Neat scanner or HP scanner that is so important to me works well? Microsoft has done a ton of work testing, but I would have at least liked to see accessible resources for consumers to check if their special peripheral works well. By not disclosing this, it made them appear to be hiding something.

Finally, there is the commercial PC and tablet market. Enterprises are currently shifting from Windows XP to Windows 7 on standard form factors like notebooks and desktops and therefore Windows 8 for the most part is irrelevant to them. Tablets are another matter altogether. Tim Cook routinely announces the extremely high per cent of enterprises rolling out or evaluating iPads, the latest figure pegged at 92%. Given Microsoft makes 75% of their profit from the commercial market, this seemed like an oversight. Given the competitiveness of the Windows 8 and Windows 8 Pro tablets, many enterprise IT people would be hard pressed to justify an iPad purchase, Microsoft should have at least given a tip of the hat to Windows 8’s applicability to the commercial market.

Where We Go From Here

Many consumer reviews have been written and there will be many, many more in the future for Windows 8 and Windows RT. For the most part, the die has been cast and the Microsoft marketing and ad machine are in full swing, all which will make a difference on perception. The Windows 8 launch was the best Microsoft launch I have ever seen or attended, and I have personally attended many. While Microsoft didn’t address everything they needed to in order to seal the deal, they absolutely got Windows 8 and RT off to a solid start. Now it’s time to see if that translates to sales.