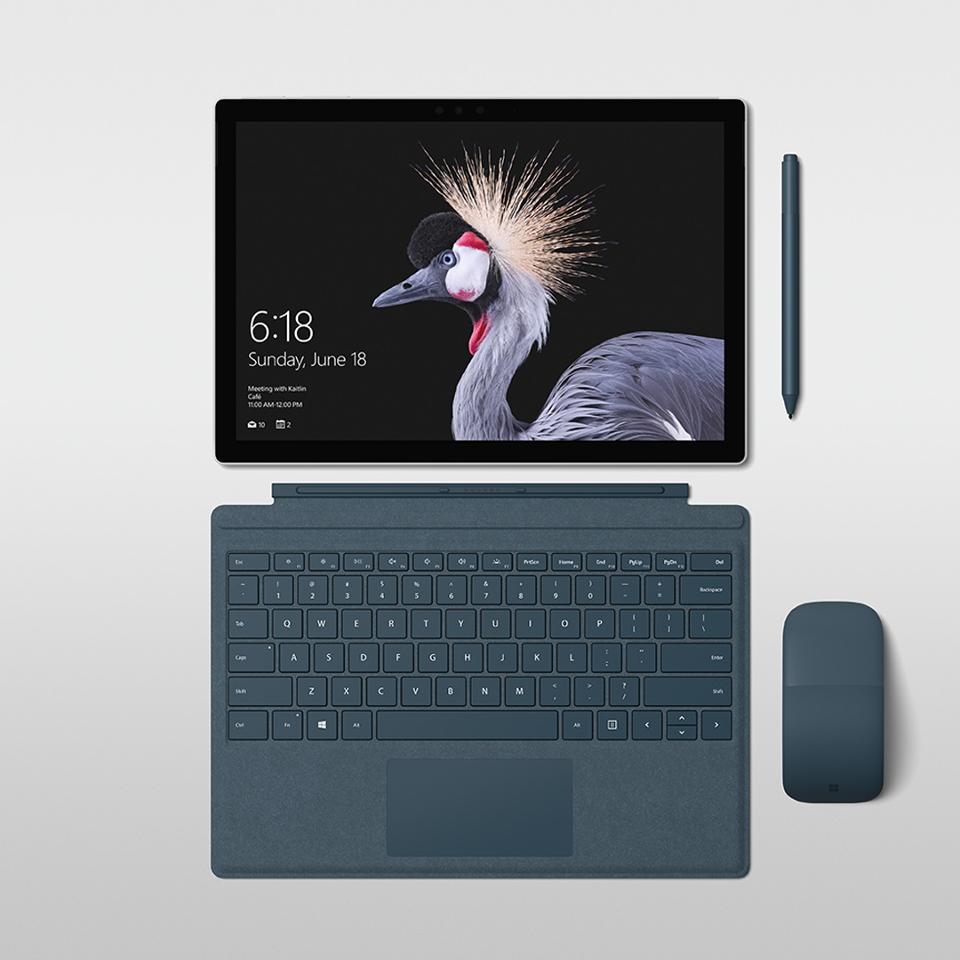 Microsoft builds the Surface devices as a showcase for its product and services meanwhile targeting Apple with their design. While Surface sales declined last quarter, overall, Microsoft has created the detachable PC market and has been very successful with it. It’s definitely beyond hobby status as its driving a multi-billion-dollar business. Furthermore, HP Inc., Dell and Lenovo have followed Microsoft’s detachable lead here and now provide competitive SKUs and in some ways, are differentiated from it, particularly in particular in commercial and rugged.

Today Microsoft launched its 5th Generation of their Surface Pro detachable PC, simply called ‘Surface Pro’. I wanted to share with you my initial thoughts on it. Note, I have touched and held the device, but I have not personally used it in my daily workflow. With the new Surface Pro, Microsoft is moving away from generationalizing with numbers (2,3,4, etc.) and sub-models within sub-brands, simply going with one name simplifies things, hopefully. I think Microsoft has the market’s ‘permission’ to do this and attempt to create more of a ‘timeless’ brand, but it does make things more difficult. For one, it’s more difficult for buyers to know what is new and what is old in the channel. Buying peripherals becomes more difficult, too since consumers might not know which version they own. We have seen these issues with the Apple iPad and we will see them with the Surface Pro.

Microsoft is no longer treating the Surface Pro as a tablet anymore, gone is anything related to ‘tablet’ in positioning and supporting tagline as the Surface Pro is now ‘the most versatile laptop’. Microsoft is taking advantage of the tailwinds of the continued deterioration of the tablet market position here. I also believe Microsoft realizes that consumers, if they see a keyboard attached, will see it as a laptop. The new positioning of the Surface Pro line will likely advantage Microsoft, but given that it doesn’t ship with a keyboard the company will deservedly take some shots from critics. I don’t think Microsoft is being cagey here, they would need to ship 4X (platinum, burgundy, cobalt blue, black) the SKUs to keep everyone happy and it’s impossible to guess people’s color preference. 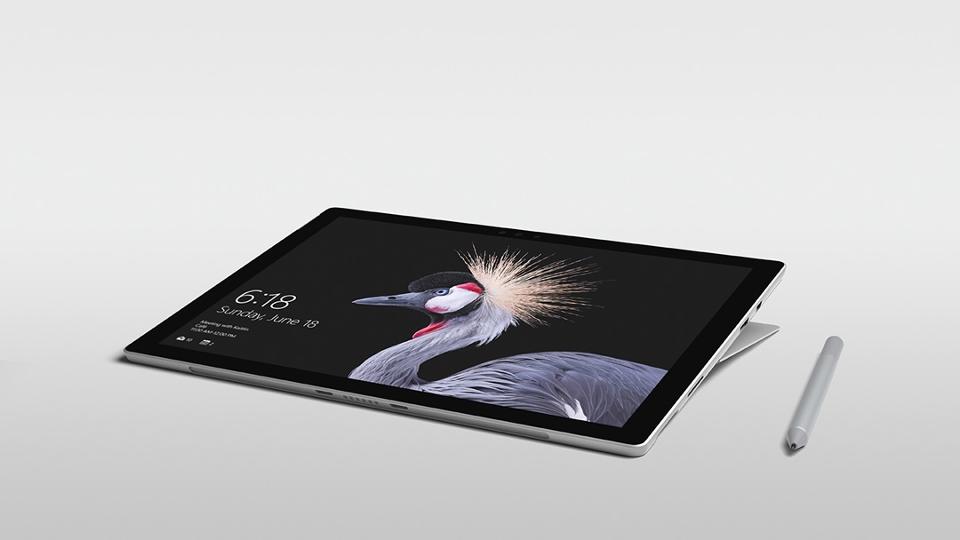 One of the biggest internal improvements to the Surface Pro is the addition of Intel’s 7th Generation Core processor, code-named Kaby Lake. This processor upgrade while incremental brings improved thermals, battery life, video and graphics performance. While we haven’t had a chance to really test the new Surface Pro, I am very impressed by the stated 50% battery life improvement. Microsoft claims a battery life of 13 ½ hours, but it’s important to know that this battery life test is only using local video playback. If you want to connect the Surface Pro to the internet you no longer need to hunt down a Wi-Fi hotspot or tether to your phone because there will now be a version of the Surface Pro with a built-in modem. We are very pleased that Microsoft is adding Qualcomm 4G LTE to the surface Pro, something we have been critical of lacking in past Surface Pros. It’s hard to claim mobility without an always available cellular connection.

Thanks to the improved thermals, the Surface Pro can cool the 7th Generation Core processor completely passively without any fans. Being able to run a Core i5 processor in a tablet completely fanlessly translates to some serious thermal design and testing from Microsoft to find space for the cooling solution. Thanks to the new cooling solution and processor the new Surface Pro no longer has visible fan vents on the outer edge of the device. Microsoft also added Intel Iris Plus graphics on all Intel Core i7 models, which is a nice boost compared to previous generations but isn’t anywhere near as powerful as the latest discrete solutions from NVIDIA and AMD. This graphics chip drives Microsoft’s signature Pixel display with the expected 2736 x 1824 resolution at the Surface-standard 3:2 aspect ratio. While it isn’t a 4K display, I do believe that this tradeoff was made in the name of battery life and lagging support for 4K resolution scaling in some applications.

I never quite understood any notebook or tablet sold in 2017 with a 720P front-facing camera. Vendors who shop those cameras are effectively saying, “don’t bother with video calls,” or,” Don’t take selfies,” with our system. With a 1080P display now being the low bar for most devices, everyone should be at 1080P at the very minimum. I’m very happy to see the Surface Pro has this.

When it comes to external peripherals, Microsoft has upped the ante with their new Surface Pen and Dial. Microsoft not only substantially improved the pen’s speed and accuracy by increasing the sensitivity to 4,096 levels but also by adding tilt functionality. Microsoft added a deeper system tilt of up to 165 degrees to make using Microsoft Ink easier. Little by little Microsoft is improving the Ink experience and adding functionality with the new dial to pull in creative types but also to improve the pen experience for novices. While these recent improvements are unlikely to make converts out of those who still hug their legal pads in meetings, Microsoft is providing yet another reason to use inking by making it easier to use.

It was perfectly understandable for Microsoft not to support USB Type-C or Thunderbolt 3 a year ago. A year ago, very few if any docks were interoperable and power standards created a user mess. Thunderbolt 3 docks over USB Type-C have improved dramatically since then, but aren’t perfect, especially when it comes to power. USB Type-C power still is a mess. Surface leader Panos Panay made a commitment to keep the Surface Connect and Dock around for a long term and he has certainly kept that promise. I still would have liked one part for Thunderbolt 3 data and video as well as charging for when or if I forget my charger. Nowadays all new smartphones except the iPhone use Type-C connectors and being able to charge all my devices with one connector is a no-brainer. Additionally, I would have liked to see Microsoft lead with an industry standard like USB Type-C or Thunderbolt 3 now that it has matured sufficiently. Perhaps they could develop the standard dock that all other manufacturers and consumers envy, not having USB Type-C is just hard to justify nowadays.

The new Surface Pro is a good evolution on an already great product. Microsoft made some really good improvements, especially with LTE, battery life, performance, and accessibility with pen and dial. Microsoft also left room for OEMs Dell, HP Inc., and Lenovo to innovate.