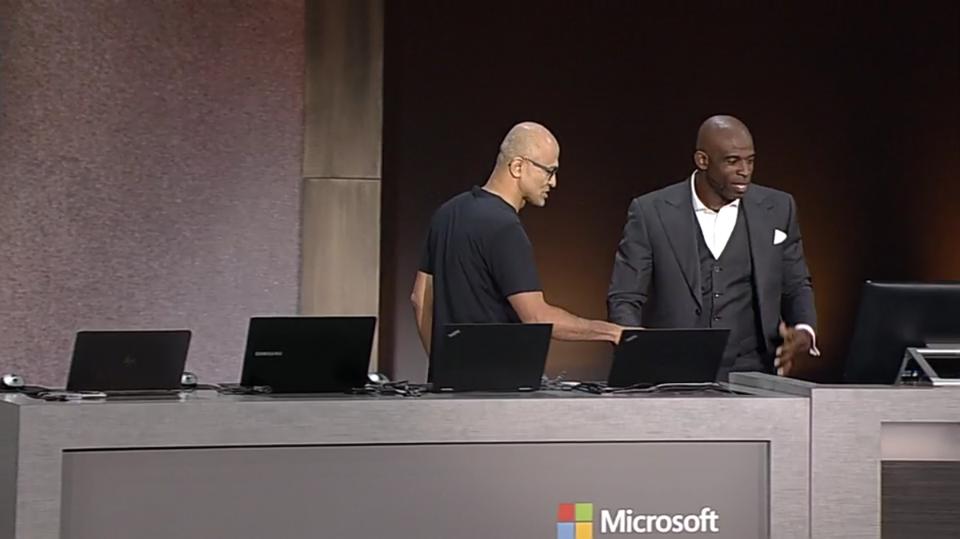 At the Microsoft Ignite Conference in Atlanta, Microsoft announced a series of major capabilities across Windows, Office, Azure, Dynamics and Cortana. Microsoft’s CEO Satya Nadella highlighted, like he has in so many other of his big-tent speeches, the importance of enabling IT to drive the digital transformation in businesses today. While I’ve heard the digital transformation storyline many times from many vendors, Nadella always finds a way to make it differentiated if not compelling and interesting. He just gets it.

At Ignite, Microsoft highlighted major improvements to security, intelligence, and their cloud offerings under the theme of “empowering” IT pros. Ignite isn’t about departments or end users going around IT, this is about IT. Those were the folks in the audience so this makes perfect sense. Microsoft already has a good reputation of enabling IT pros tied to Microsoft’s cornerstone products like Windows, Office, dev tools like Visual Studio, server-side products like Exchange and SharePoint, and Azure. Microsoft’s job at the show was to show they can accelerate that into the future while not ignoring their current investments.

The Ignite announcements are all part of Microsoft’s gradual transformation towards more intelligent and secure platforms that utilize machine learning and AI to transform the way we all get stuff done. I wanted to talk about a few security, cloud and AI announcements from the show and share my quick take on it. I’ll be following up in details on specific areas in the future.

While it’s always a challenge to make security exciting, the most important part of Microsoft’s announcements at Ignite were the company’s improvements to security, and it’s driven by the realities businesses attending Ignite face today and will into the future. When you consider the threat plane widening with mobility and IoT, and threats getting deeper with state-sponsored hacking, security has to be the first thing that gets talked about before any feature or capability enhancements.

I believe the most interesting security announcement was Window Defender Application Guard. It’s designed to make Microsoft’s Edge browser the most secure browser for the enterprise, powered by a virtualization-based security technology and containers. I can still see the classic enterprise using Internet Explorer for older web apps, but using Edge with Application Guard for everything else including newer enterprise apps. If users use Application Guard and hit a website that isn’t white-listed, the page visually gets flagged, users can use the website, but it has limited functionality. It can’t screen scrape, access the file system nor does it have access to network resources.

Application Guard is one of this “why didn’t this happen before” ideas and gets you wondering, “why didn’t see get this before”? Architecturally, Windows 10 improved the ability to secure everything, adding a system container to place all trusted executions inside. Microsoft made everything more secure by removing it from the classic Kernel-Platform Services-Apps stack and tied security directly to a separate “security stack” that is tied to hardware VBS or “virtualization-based security”. VBS is tied right to ARM Holdings, Advanced Micro Devices and Intel’s hardware-based virtualization. 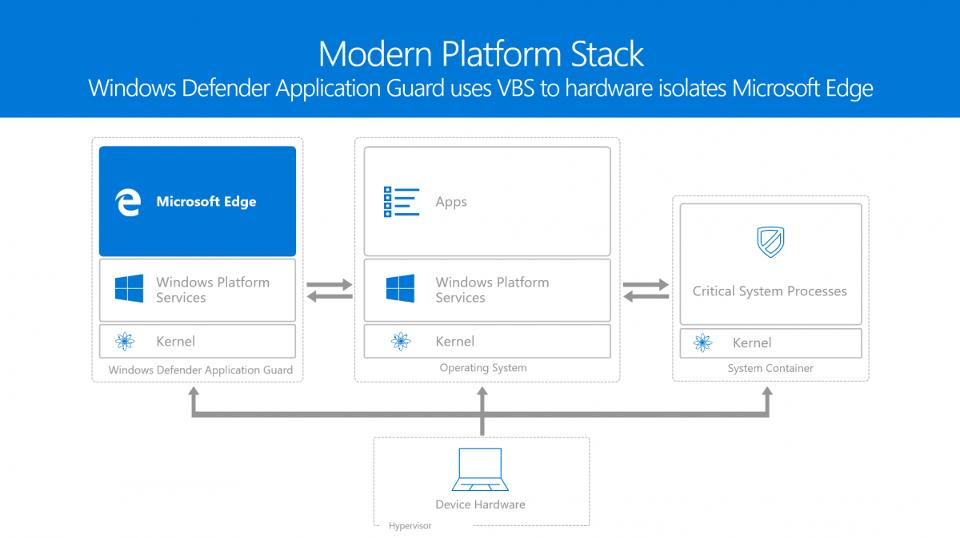 While I have talked about Application Guard only in the context Edge browser, expect to see it across other applications over time.

Additionally, Microsoft’s Windows Defender Advanced Threat Protection (WDATP) and Office 365 ATP now share security intelligence mutually across both services. Office 365 ATP threat protection will also be extended to Word, Excel, PowerPoint, SharePoint Online and OneDrive for Business. Microsoft also talked about their upcoming Secure Productive Enterprise E5, which is designed to offer the most advanced security and productivity across all of Microsoft’s core products. This is being paired with enterprise mobility to enable expanded security to help the move towards the cloud and mobility.

Microsoft surprised many with their ascension to a top-tier, public cloud player. In fact, they’re the #2 market share cloud player only to Amazon.com’s AWS. Microsoft said at Ignite they had 120K new customer sign-ups monthly. Yes, monthly. 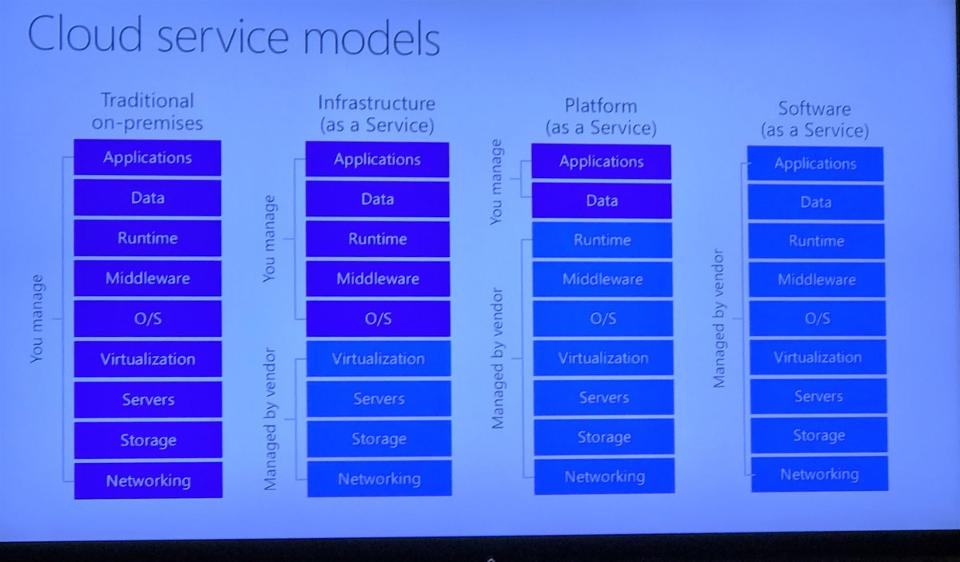 They have been successful by investing billions into global datacenters, creating a full (IaaS, PaaS, SaaS) cloud stack, by supporting what would have been considered taboo like Linux and Docker containers, and through a good understanding of what enterprises really want related to SLAs. Microsoft gets IT, many others don’t. Just because a company is great in consumer cloud services doesn’t make you good at business services. In fact, history shows that it’s difficult to nearly impossible to do well in commercial markets if your core is consumer, and vice versa. Some of the improved capabilities announced at Ignite include new Azure monitoring abilities combined with updates to their operations management suite.

Microsoft gets IT, many others don’t.

Microsoft’s cloud approach is “have it your way” by supporting a “hybrid” approach, from one spectrum with on-prem private cloud to a full SaaS model. Azure Stack is a huge play here and at Ignite Microsoft announced its three lead partners for the platform, Hewlett-Packard Enterprise, Dell EMC, and Lenovo. Microsoft also announced its second technical preview of Azure Stack. Interestingly, only Lenovo doesn’t sell their own cloud stack as Dell EMC has vCloud Air/Suite and Hewlett Packard Enterprise (HPE) has Helion. I’ll be keeping my eye on the Lenovo-Microsoft Azure cloud play very closely. If Microsoft can be the first company to seamlessly connect on-prem legacy to on-prem cloud to public cloud, they and their partners could find themselves in the cloud driver’s seat. Ironic, right?

At the end of day one, Microsoft CEO Satya Nadella, came back on stage to deliver the message that Microsoft “democratizes AI” by providing any level of AI, be it agent (Cortana), applications, services and infrastructure.  Microsoft does, in fact, provide AI and ML capabilities in many different forms and is taking different but related approaches versus Google, Amazon.com, or IBM. Nadella delivered the vision but also showed some cool NFL AI chat bot examples aligned with their CaaP (conversations as a platform) strategy. Somehow, Microsoft managed to find a fun way to get Neon Deion Sanders on stage to ham it up. I thought it worked and wasn’t cheesy.

At the end of Nadella’s AI stage presence, Microsoft intelligently focused on some of the “magic blue crystals” (my description) of some things that distinguish Microsoft, and that was FPGAs. Microsoft got wonderfully geeky, even to my chip-making past desires, going into AI workload benchmarks. It was great. They explained what they described as the world’s largest deployment of custom developed FPGAs that span 15 countries and 5 continents. This is potentially huge for the future of Microsoft’s cloud platform as it signifies Microsoft’s own investment into FPGAs as a way to accelerate machine learning and AI. Senior analyst Karl Freund wrote about Microsoft’s FPGA Ignite disclosures here. 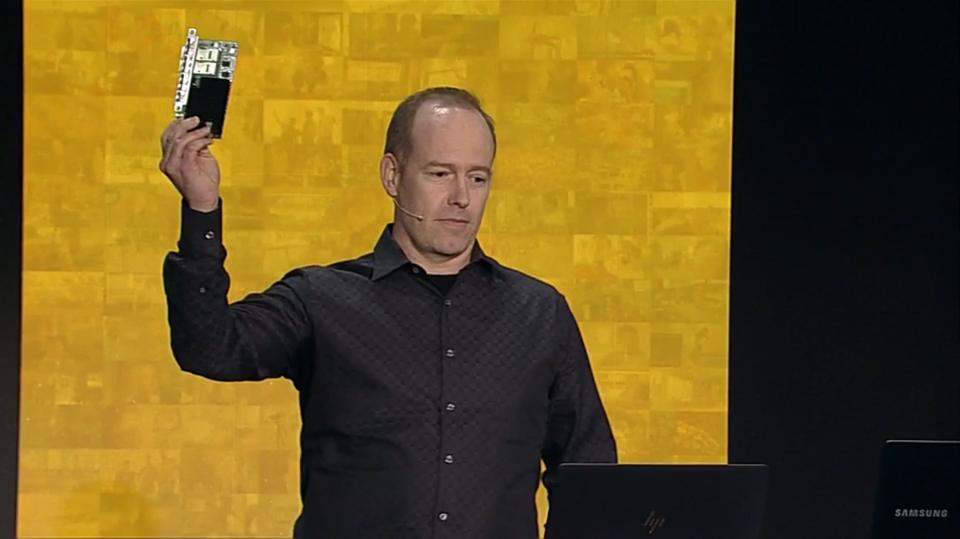 I find it immensely ironic that hardware is held up as a differentiator.

At Ignite, Microsoft needed to show IT that they not only understood them and could support them today, but also be a reliable and innovative supplier of next generation technology for tomorrow. I believe Microsoft did both as they sprinkled AI dust on Windows, Office, Dynamics, and security while wowing the crowd with details on their AI and intelligence future with a hat tip to their hardware differentiation with FPGAs. And in the center of it all is Azure and Azure Stack, the glue that holds everything together. It’s amazing to me how far Microsoft has come in the past two years and Ignite was a good showcase for Microsoft to show this off to their IT customers.