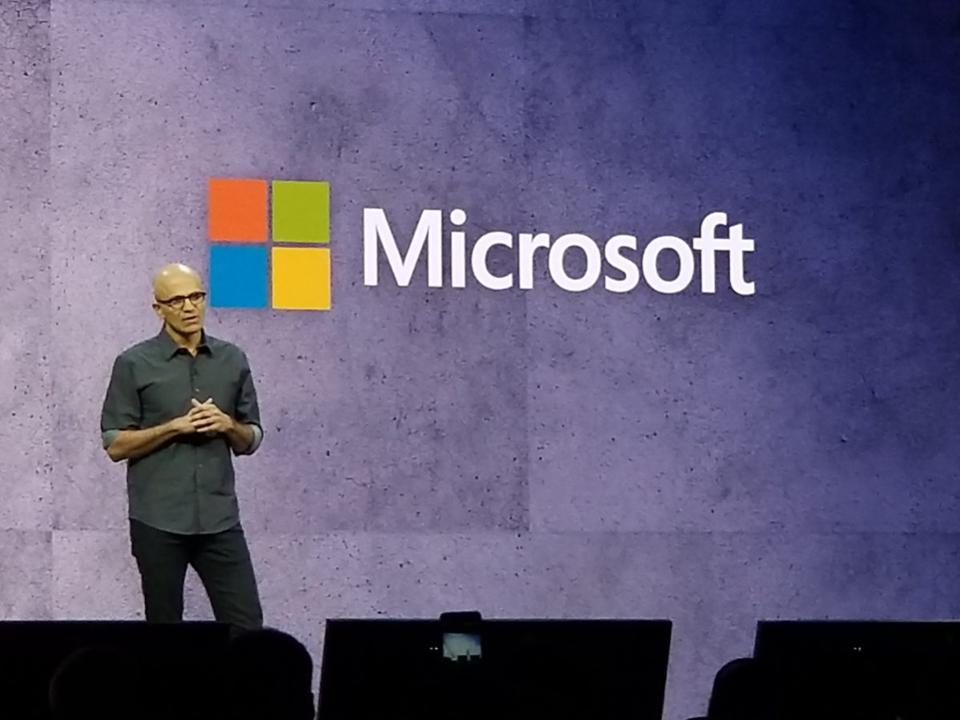 This week I’m in Orlando attending Microsoft Ignite and Envision 2017, the company’s annual conference dedicated to all things for enterprise IT and business executives. I’m no stranger to Ignite—I try to attend every year to hear the latest on what Microsoft has been cooking up for big business. Last year, the focus was all on accelerating the digital transformation of enterprises through IT (you can read my Ignite 2016 recap here). This year was a continuation of that, with the company demonstrating how it was integrating AI, mixed reality, and cloud technology across its portfolio to evolve the enterprise and prepare its customers for the workplace of the future. I wanted to go ahead and offer up my recap of the bigger stories coming out of Day 1 of the conference, with a focus on CEO Satya Nadella’s keynote address Monday morning.

Corporate VP of Cloud Platform Marketing, Julia White, took the stage first to introduce herself as the host of the event. She took a moment to thank the people of Orlando for hosting the event in the wake of the devastation left by Hurricane Irma, a nice touch. After a few words, she introduced Nadella to the stage. Nadella, as I’ve said before, is a rock star, and while many of the themes of these conference keynotes have become repetitive as I attend nearly all Microsoft’s events, I always look forward to hearing what he has to say. Nadella is one of the few technology leaders who have empathy and business and technical depth and he was firing on all cylinders every Ignite and Envision venue I saw him in.

Nadella led off with a few words on digital transformation, saying that the most critical aspect was bringing together everyone, with their various areas of expertise, together to support the process of continuous change and renewal. Nadella posed the question, “How are we going to empower people?” He went on to say that every piece of technology developed should “embellish the capability of human beings.” This brought him to what he says is Microsoft’s main mission: empower every person and every organization on the planet to achieve more. I like that Microsoft constantly reiterates their mission as it helps put listeners in the right frame of mind. It also helps to amp up Microsoft’s differentiation from their consumer competitors trying to get into commercial and separate itself from the slower database, ERP, and even SaaS companies.

Nadella said a few words on Microsoft 365, saying that its core purpose is to “unlock a new culture of work.” Think of Microsoft 365 the “all-in” product enabling every Microsoft piece of software and service. At this point, Nadella brought Raanah Amjadi, Product Marketing Manager of Microsoft Teams, to the stage to talk about modernizing the workplace. She talked about Ford Motor Company, and the company’s need to have a friction-free environment, while still maintaining security standards to protect its IP. Amjadi gave a demonstration of how Microsoft could empower Ford’s teams to design and engineer new vehicles using 365, Mixed Reality with HoloLens, and VR, saying that Microsoft’s vision is for Ford and other companies to have the ability to fully, interactively, collaborate from anywhere in the world. 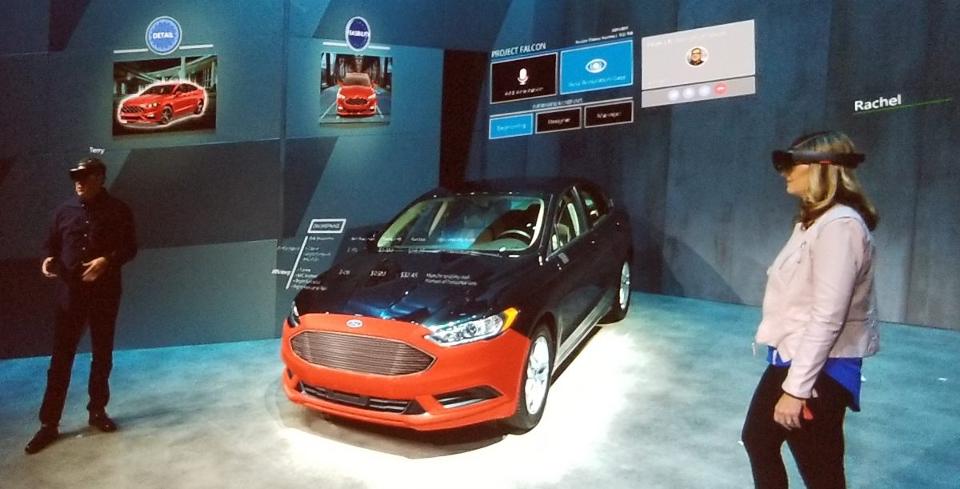 Ford shows off cutting-edge use of Microsoft 365

This demonstration was “out there” for many enterprises, but it highlights just how far into the future Microsoft can go with an enterprise. Adding mixed reality, AI and conversational platforms to get more work done more collaboratively and globally is the holy grail, right? Microsoft wants enterprise to know they can play with startups and large consumer tech companies and the reality is that they can.

Nadella returned to the stage to talk more about Microsoft 365. He mentioned the first integration of Microsoft 365 with LinkedIn: users can now see LinkedIn profile information from within a select group of Microsoft’s suite of apps and services. This capability is being rolled out first within Outlook Web Access, SharePoint, and OneDrive for Business. This is a cool feature that finally makes good use of Microsoft’s strategic acquisition of LinkedIn back in 2016. If data is the new oil, LinkedIn could be jet fuel for business applications providing depth and context for workers and bots for automated workflows.

Next, Nadella talked about the new Intelligent search features, powered by AI and machine learning, that are being added to Microsoft 365. The big announcement in this area from Day 1 was the private preview of Bing for business, which Microsoft claims will give enterprise customers a unified view of personalized, contextual search results. I liked the yellow box Google had for this and I like this, too. Google has cross-enterprise search too, but only if it’s uploaded to the Google public cloud within G Suite.

Nadella then brought Li-Chen Miller, Partner Group Program Manager of AI & Research on stage to give a demonstration of both the new LinkedIn integration and intelligent search with Bing. The demonstration was compelling and fun as it showed the difference between Bing for business and consumer in a search for Harry Shum. Harry Shum with Glee and Harry Shum with Microsoft AI are two very people. Of course, they are, point made.

I want to depart from the keynote briefly to give a rundown of the other flurry of announcements around Microsoft 365. Microsoft also announced on Day 1 that it would be bringing 365 to a couple of new audiences. Targeting students, faculty, and staff, the new Microsoft 365 Education combines Office 365 for Education, Windows 10, Mobility + Security and Minecraft: Education Edition, to facilitate secure classroom collaboration. Obviously, education is a huge market that Microsoft has a long history of tapping into—this announcement came as no surprise. Google is gaining a lot of ground in K-12 and Microsoft needs to act fast to stem the tide of defection.
Secondly, Microsoft is introducing a new enterprise plan called Microsoft 365 F1—designed for so-called Firstline Workers, to maximize their productivity. Microsoft says this plan will help develop employees’ skill sets, digitize business processes, and help foster workplace culture and community. Microsoft also announced a new line of Windows 10 S commercial devices from HP, Lenovo, and Acer, all designed for cloud-based identity and management—which the company says makes them well-suited for firstline environments. I like firstline workers as a target as that audience doesn’t get a lot of attention. I finally “get” Windows S, too, as this firstline environment is perfect for the new operating system that requires higher security and better management. Microsoft and their OEMs also rolled out new Windows 10 S notebooks, priced as low as $279. Combined, Microsoft 365 F1 with new Windows 10 S notebooks will be fighting it out with Google G Suite and Chromebooks. This should be interesting.
Expanding upon Dynamics 365

Back to the keynote—Nadella spoke a while about Dynamics 365, and the new AI solutions that Microsoft was introducing into the suite. He stressed the need to build AI-first business applications. Microsoft is unveiling an intelligent virtual agent for customer care, a smart assistant for customer service, and various conversation management tools—all of which Microsoft says will help its customers to handle more requests, more quickly. Also coming soon to Dynamics 365 are Microsoft’s first two modular apps, Attract and Onboard, which Microsoft says will help companies to recruit the best candidates for job openings. In addition, Microsoft announced deeper integration between Dynamics 365, Office 365, Microsoft Flow, and PowerApps. It was nice to see a real customer like HP Inc. espousing the benefits. 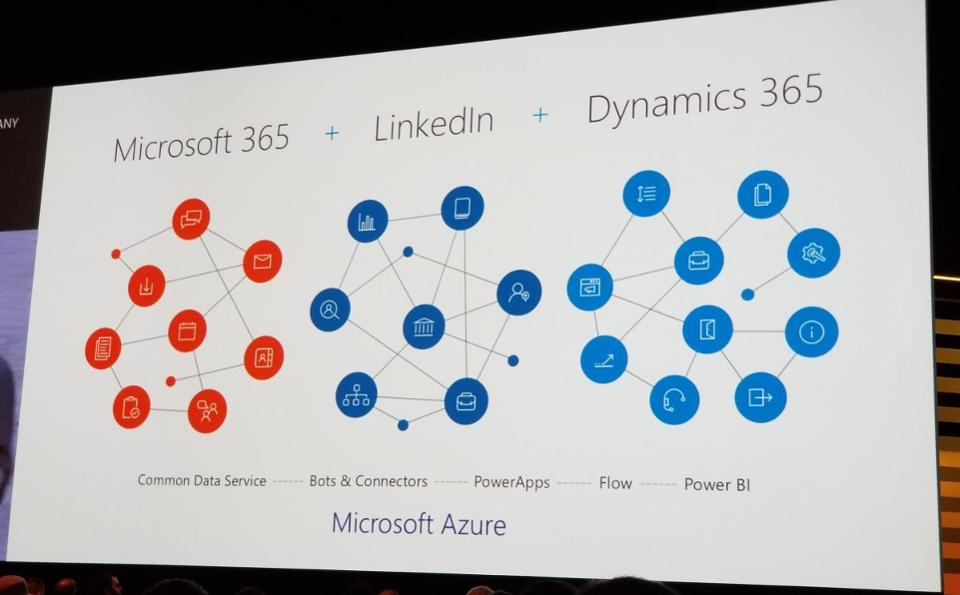 Microsoft 365 + LinkedIn + Dynamics 365 is a unique combination for enterprises

It hit me sitting in the keynote at the new alternatives Microsoft is providing to Salesforce.com, Oracle, and even SAP. While Attract and Onboard are the first two applets, I expect many more to show up that go head to head with services from Salesforce.com, Oracle ,and SAP. These companies have the advantage of being embedded into enterprises today but have a disadvantage in AI, cloud and IoT. I’m breaking out the popcorn for this one as it will be a wild ride.

News from the Azure cloud

After Dynamics 365, Nadella moved on to talked about Azure. There was a whole raft of Azure announcements from Day 1 (which you can read about in detail here, if interested), but the biggest piece of news was that Microsoft’s hybrid-cloud solution Azure Stack is now available through Microsoft’s OEM partners, Dell EMC, Lenovo, and Hewlett Packard Enterprise. It took a long time coming with many twists and turns, but it’s finally here. Azure Stack allows its customers to develop and deploy apps in a hybrid environment, using the exact same tools they would use within the Azure cloud. In a way, it’s the holy grail for enterprises who don’t want to learn multiple cloud environments for on-prem and public cloud and the ability to flex between them.

Another announcement Microsoft highlighted was the launch of Azure Cost Management Services, by Cloudyn. Microsoft says these services will allow customers to use one unified view to manage and reduce their cloud spend across multiple clouds. As a bonus, these services will be available free to all Azure customers and partners. Many enterprises will ultimately want tools to do real-time comparisons, capabilities, and configuration across Azure, GCP AWS and IBM Cloud, not just across Azure.

In addition, Microsoft announced the new release of SQL Server 2017, which the company touts as the first born-in-the-cloud database that is also available on-prem. For the first time, the SQL Server will be available to Windows, Docker, and Linux Containers, which Microsoft says will enable the construction of the next generation of AI models and intelligent apps. Hell froze over again and SQL Server on Linux is yet another example that sacred cows are still being shot at Microsoft.

Seeking to make the quantum leap

Nadella then pivoted to the area of quantum computing, describing a variety of yet unsolved problems that could potentially be solved by it—the energy crisis, global warming, food production, to name a few. He then brought a panel of experts onto the stage to talk in depth about the science behind quantum computing. I’ll be honest, the panel was a bit hard to follow and I’m even a compute guy. This was all context for Microsoft’s announcement that later this year, the company will be releasing a yet unnamed new computing programming language designed specifically for quantum computing, which will come with full Visual Studio integration and a quantum computing simulator. Microsoft clearly sees quantum computing as the next big thing, and with the release of this toolset, it’s trying to position itself at the forefront of the field. 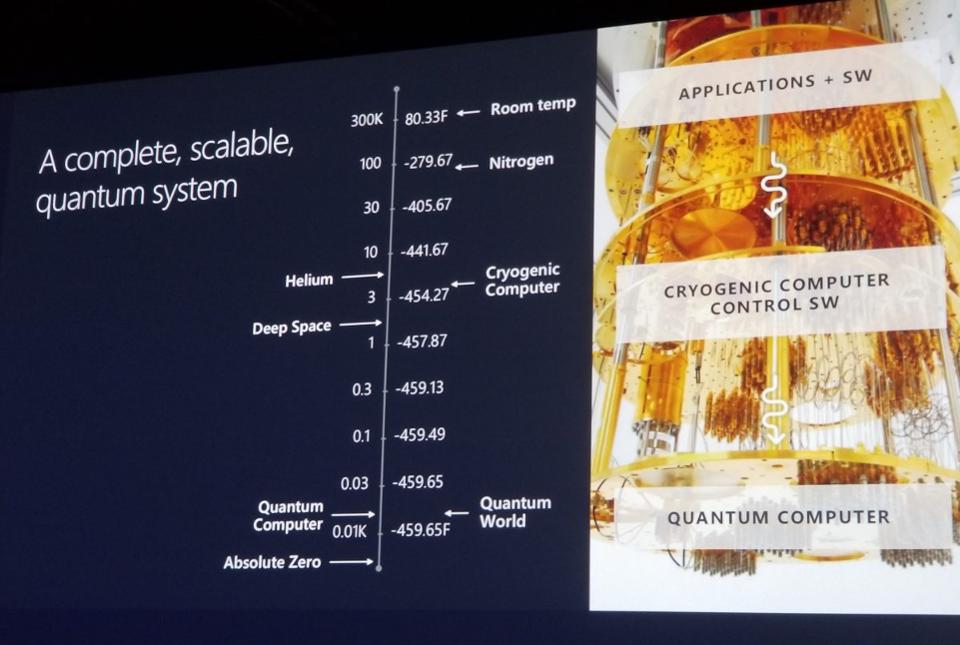 With IBM, Intel and Google all investing heavily in quantum computing, it was nice to see what Microsoft was investing in I am impressed with the depth of Visual Studio integration and the quantum cloud. Not lost on me either is yet another cloud giant investing in hardware. Silicon is eating the world now, yes?

Overall, it was another engaging, informative keynote from Nadella. There was certainly no lack of new announcements to pour over. Microsoft seems to be well on its way integrating AI, MR, and cloud technology into everything they do, and it was great to see some examples of this new technology at work. From Microsoft 365, to intelligent enterprise search engines, to Azure cloud, it seems like everything Microsoft does is getting smarter and more streamlined. I look forward to seeing what the company does next, and what the rest of the conference holds. While I am doing a lot of comparing and contrasting Microsoft’s announcements to Google, Amazon.com AWS and Cisco collaboration, I’m most interested in how Oracle, Salesforce.com and SAP react to these announcements.