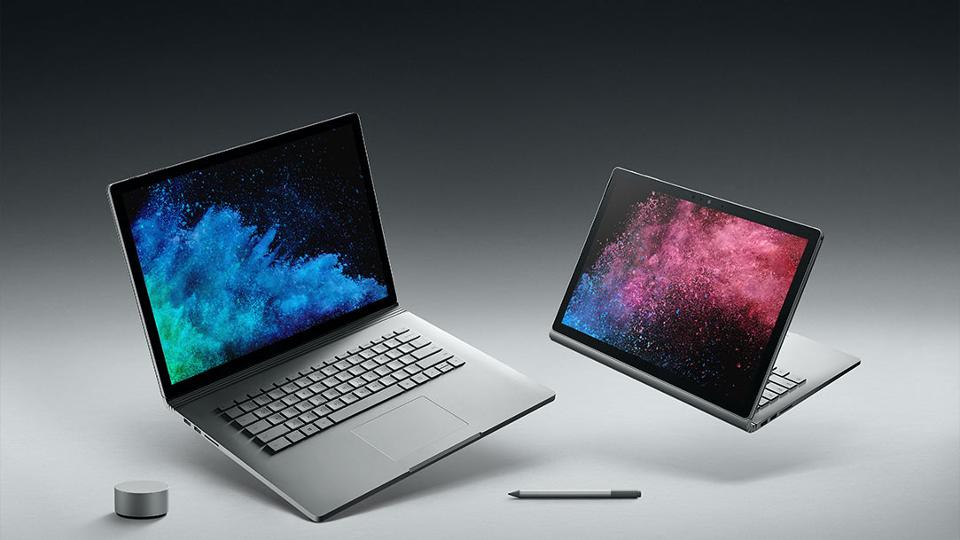 I wrote last week about Microsoft shipping the Windows 10 Fall Creators Update and I wanted to round out coverage talking about some unexpected Surface Book 2 announcements. The company announced new Surface Book systems simply called “Surface Book 2” and I wanted to give the rundown and my opinion. Net-net, while there had been speculation and rumors of Surface exiting the market, based on the Surface Book 2 value proposition and line expansion, I don’t see that happening anytime soon. Oh, and the addition of the 15″ Surface Book is a welcome addition.

Surface typically brings something new to the experience

I’ve used every single Surface ever produced and while its first few iterations were rough, I now really enjoy this product line. For the most part, Microsoft wants to bring something new to the party the other Windows OEMs didn’t, and at a healthy price premium:

Surface Book 2 sports the latest 8th Gen Intel Quad-Core (15” and 13.5”) and Dual-Core (13.5”) processors with lower power Intel 620 integrated graphics and NVIDIA GeForce GTX 1060-6GB GDDR5 (15”) and GTX 1050-2GB GDDR5 (13.5” i7 model) discrete graphics. As performance is a key Surface Book tenet, Microsoft is deservedly proud to call out their performance gains and advantages, when they have it, saying:

One caveat on the performance comparisons- I haven’t run them myself and one benchmark, 3DMark, rarely tells the entire story. With that said, the claims do pass my smell test.

So what would you do with all that performance? If you need a performance machine, you know. On the productivity side, it’s video, audio and still image content creation, it’s AR and VR content production, it’s software development, and it’s hard-core gaming. The release of this computer coinciding with the Fall Creators Update was no accident—the Surface Book 2 was designed to take full advantage of Windows Mixed Reality, Remix, gaming, and game streaming. The 15″ Surface Book 2 even has built-in Xbox wireless game controller capability.

With all that performance, Microsoft says Surface Book 2 will run videos for 17 hours with the Performance Base and 5 hours in Tablet Mode. Watching videos is a key usage models for PCs and I think this is great. Video battery life also gives an easy consumer comparison to Microsoft’s target, the Apple MacBook.

I wish there were more battery life guidance on other use cases, like operating Microsoft 365 and doing web research on Edge and Microsoft 365 over WiFi. Industry-wide, video playback is very highly optimized to one video playback silicon block on one part of the integrated GPU which is one block on the entire Intel SoC. Video does not really tax the CPU, memory, or storage which is why smartphones can playback 4K video. As my personal use case is Microsoft 365 and web browsing, I like the Apple MacBook “up to 10 hours wireless web, up to 10 hours iTunes movie playback and up to 30 days of standby time” with 140 words of disclaimer. I can’t wait to test a unit myself and see how the battery life is on my use case. Given all the telemetry data Microsoft has, I am confident they are tuning battery life for real-life productivity use cases as they sweat the details, care about the end users and of course, want a good review.  Given that and power advantages the Intel 8th generation Core brings, more batteries, and continued Windows 10 battery life optimizations, I am expecting very good battery life with Surface Book 2.

One of my lamentations of Surface Book “1” was the lack of USB-C and Thunderbolt 3. I wanted it to future-proof my investment and do external GPU gaming. To Microsoft’s credit, when they launched the last Surface Book, USB-C and Thunderbolt 3 was completely messed up. Marco Arment recently wrote this on the past vision and the present state of USB-C and it brutally sums up the challenges. With all that said, I am very, very glad Microsoft added USB-C for external displays and power because I believe the technically astute buyers expect it and will wade through the details to buy peripherals that work, return them if they don’t. I’, interested to see how well USB-C powers the 15″ unit going full bore with graphics.

Thunderbolt 3 is not perfect, either, as early external GPUs aren’t compatible across many systems. While I know Microsoft could have easily added Thunderbolt 3 over USB-C and eaten the added cost, they didn’t as they must not see it as ready, either. Adding Thunderbolt 3 would also call into question the entire Surface Dock reason for being. I believe Microsoft will add Thunderbolt 3 next cycle and will bring with it with new charger and dock. I think the lack of Thunderbolt 3 could be an issue for designers who want to have an external, highest-speed storage array or have multiple, beyond 4K displays. Dell is showing off incredibly wonderful 8K displays and 5K displays are finally coming down at price.

I can’t wait to try out the new Surface Book, a performance beast, particularly the 15” version. While I love 13” devices for travel, on 15” devices, I can just get so much more done and hard-core gaming actually makes sense. Microsoft took the best characteristics of the last Surface Book with Performance Base I reviewed here, made it a lot better, and extended the line to 15”. If you’re a designer, a developer, a gamer, all-in on Microsoft, or just want more, the Surface Book 2 should be in your consideration set.