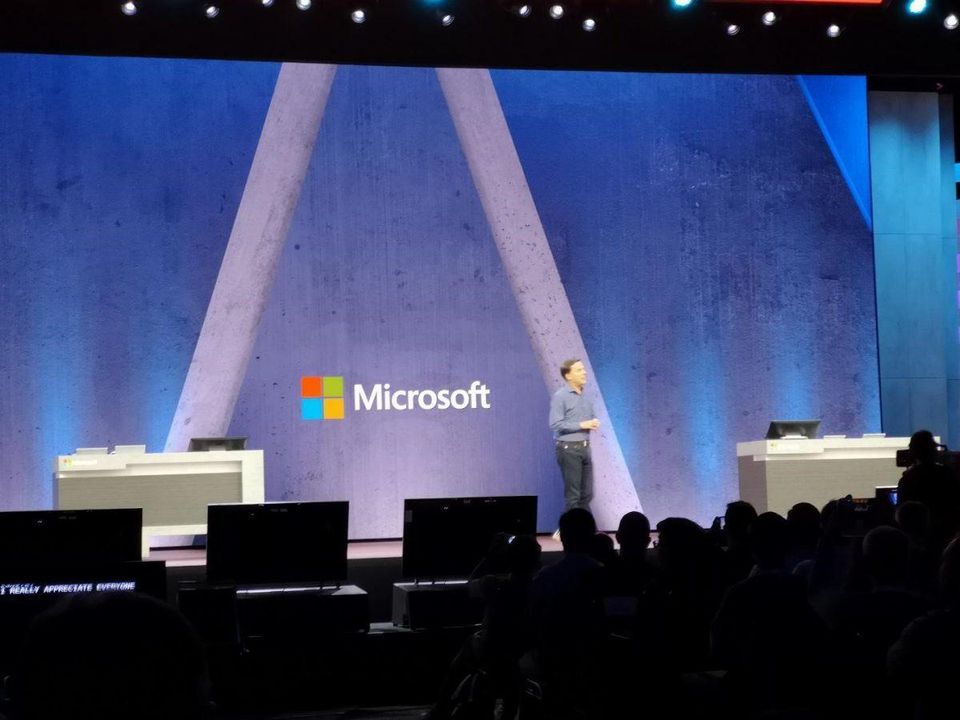 Today I continue my coverage of Microsoft Ignite 2018, which I attended last week in Orlando, FL. Ignite is Microsoft’s annual customer and CIO conference, which I make a strong effort to attend every year (see my coverage of 2016 and 2017’s conferences if interested). While Part 1 of my 2018 coverage focused on Microsoft, SAP, and Adobe’s newly announced Open Data Initiative and a myriad of cybersecurity announcements (read my take here), Part 2 is all about what Microsoft is doing to modernize the workplace. As I wrote previously, our analysts Chris Wilder and Karl Freund will be covering IoT and AI-related announcements, respectively. Additionally, I will be penning a separate column all about Microsoft’s new Surface Hub 2. Let’s dive into Part 2.

VDI or Virtual Desktop Infrastructure is the most secure way to desktop applications as all code is run on the server. Some of the challenges have been the user experience, complexity and cost.  Microsoft wants to change that.

Perhaps the biggest news at the show in modern desktop computing was Microsoft’s announcement of its new Windows Virtual Desktop service, which it bills as “the best-virtualized Windows and Office experience”, delivered on Azure. I see it squarely competing with Amazon AWS Workspaces and AppStream, many offerings from Citrix and Vmware, and even Nutanix’s newly-acquired Frame capabilities. Microsoft is optimizing the Windows Virtual Desktop experience for Office 365 ProPlus and is the only multi-user Windows 10 experience I am aware of in the industry. This is a big deal as multi-user can save a bunch of setup and administrative time.

From many of the demos I saw, Windows Virtual Desktop looked as if its capable of being deployed and scaled in a matter of minutes, utilizing Azure for compute, storage, diagnostics, networking, gateway, and more. I really liked the easy way to configure use cases and sizes. The offering also gives users an impressive amount of flexibility, allowing enterprises to virtualize entire desktops or specific apps, depending on their needs. Microsoft says it’s working very hard to integrate the experience seamlessly into users’ experiences when delivered to a Windows 10 endpoint. I saw two impressive demos, one, sing VDI with pen and markup and a copy and a paste from a PC to a virtual desktop. It looked fluid and fast like it was “local.”  I must point out I do not know the speed or latency of the networked used, but the company did state the server was 2,500 miles away

Obviously when we’re talking about enterprise IT, security is of the utmost importance, and in theory, VDI is the most secure. Windows Virtual Desktop features built-in security and compliance consistent with Azure services, as well as free Windows 7 Extended Security Updates for those in the process of transitioning to Windows 10. I think we could see a boon of enterprises using the service just to use legacy Windows 7 apps. The service is deeply integrated with Microsoft 365’s security management, featuring data loss prevention, conditional access, and integrated management capabilities. Microsoft told me that the service could be configured in a zero and thin client modes and that it is working with major VDI equipment makers to get certified.

One of the things I think Microsoft is doing right here is its focus on building out the ecosystem for Windows Virtual Desktop—it announced it is already collaborating with numerous partners to enhance the service through the Azure Marketplace. These include Citrix, CloudJumper, FSLogix, Lakeside Software, and more. One of the most interesting companies I met with at the show was Liquidware who I think can be very valuable to any enterprise who needs help with the heavy lifting involved in VDI. I was a bit surprised to see Citrix here and need to dig more into how they fit into the equation. Microsoft’s Cloud Solution Providers will all be able to offer the service to their customers, with the potential to add even more value.

This is a net-add for Microsoft and when combined with its new desktop as a service offering below, means customers can consume Microsoft products any way they wish. Unlike other VDI implementations there is no fee (with E3 license) for the client “connector”, but, of course, there are Azure fees.  I would hope that Microsoft could deliver the best Windows VDI user experience as it owns the OS, many apps and the infrastructure, but we will see. With Microsoft owning the end to end experience, I would like to see it consider creating some kind of experience guarantee for certain apps which I believe would get the industry focused on what it should be when it comes to VDI- the end user.

Before Ignite, Microsoft announced its foray into the desktop “as-a-service” market with Microsoft Managed Desktop (MMD). MMD provides businesses with a “modern desktop” experience, on a “modern device”, managed by Microsoft. 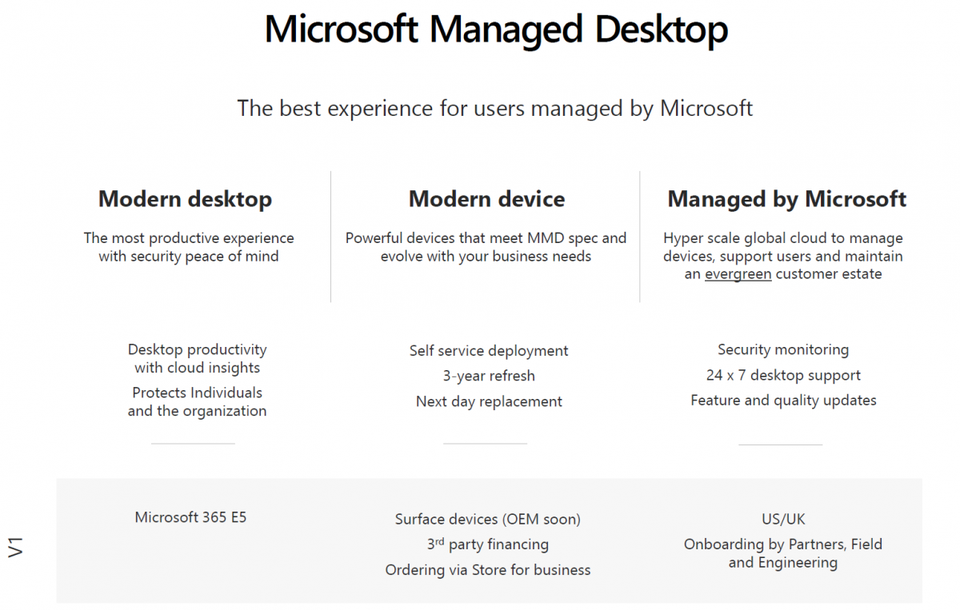 For now, MMD is available only on Microsoft Surface devices, but Microsoft says offerings from other OEMs (such as Dell and HP) are coming to the service soon. MMD features Microsoft 365 E5, which includes Windows 10 Enterprise, Office 365, and Enterprise Mobility + Security. The service boasts self-service deployment supporting zero provisioning, next day replacement, and a 3-year refresh to keep businesses outfitted with the latest technology. It is available for a monthly fee, in both 2-year and 3-year packages.

Keeping businesses outfitted with the latest Surfaces is just a small part of the MMD proposition. I agree with Microsoft when thy say that many companies have trouble finding and keeping trusted IT talent to manage their IT infrastructure or need to deploy them to new or higher-value projects. With MMD, Microsoft manage pretty much everything in the cloud, reducing on-premise resources and personnel. As part of MMD, Microsoft will provide security monitoring, 24/7 desktop support (hot transfers for enterprise apps), and feature and quality updates. With the new App Assure, Microsoft will actually make sure enterprise apps are compatible with the speedy updates to Microsoft 365. This is a big deal as it literally removes every objection to moving at the much-faster Microsoft release pace.  Where this all gets interesting is when the enterprise asks for some kind of security guarantee with MMD. Microsoft seems very confident that if the enterprise is using the full MMD stack with managed cloud services, it will be secure.

The other important piece of MMD is its ability to provide cloud-driven insights and analytics. Microsoft says that analytics is “at the heart of MMD,” enabling the company to derive security insights and learnings to better monitor and manage its global device population. For example, Microsoft says AI and analytics help to determine which devices need feature updates, or when, say, a particular application is getting in the way of a device update.  I need to dig into some of the additional insights Microsoft intends to bring to the table beyond what its current, on-prem tools can bring.

MMD is now officially in the process of rolling out, having already been deployed with several early customers in the U.S. and U.K. (with Australia, Canada, and New Zealand to follow in early 2019). Microsoft says it will utilize insights gleaned from these initial customers to improve and expand the service to other geographic regions in the latter half of 2019.

MMD is a bold new step for Microsoft which, in addition to another revenue stream, will be an incredible learning experience for the company. With enterprises pushing back on the company’s rapid pace of releasing new versions of Microsoft 365, it is now the one throat to choke if something goes south. I heard some very positive stories from Microsoft on how MMD customer feedback is already making its way into changes in the upstream development process.  This, at its heart, is one of the biggest values in any XaaS, relevant product improvement.

A few months ago, Microsoft launched a free version of Teams, which appears to have kicked adoption into even higher gear (read my take on the announcement here). Microsoft said at Ignite that it is the fastest growing business app in the company’s history. Teams senior management shared with me that it had over 60 customers with over 10,000 Monthly Active Users (MAU), which is pretty impressive given the age of Teams.

At Ignite, it announced that in October it would incorporating new experiences into Teams designed for Firstline workers, as part of a general push to support industry-specific, role-based workflows with a focus on regulated industries. The new features include schedule management tools that will allow managers to create and share schedules and post announcements. Employees will also be able to utilize Teams to request time off and swap shifts.  Microsoft showcased a new patient care coordination solution for the healthcare industry, which it says integrates Teams with practices’ electronic health records (EHR) systems. Healthcare professionals will be able to utilize two new secure messaging features—essential considering HIPAA and the sensitive nature of patient health data.

The workflow focus on firstline workers in regulated industries is low hanging fruit for Microsoft compared to solutions like Slack that aren’t tied into enterprise systems and could also be an easier app solution than Oracle and SAP.

Workplace and productivity is obviously a realm where Microsoft has long excelled. This is a new Microsoft who isn’t waiting for five years to react to competitors, it is getting ahead of the curve, and Teams is the best example. Microsoft Virtual Desktop and Microsoft Managed Desktop are two great examples of how Microsoft offering its customers new and quite frankly, any way to consume its product and services while solving some known needs and mining pools of data to improve its craft. Teams continues to expand and grow, and by targeting more specific niche markets such as healthcare and Frontline workers and adding workflows with Flow, it’s only going to pick up more customers and challenge both Salesforce, Oracle and SAP in apps. Stay tuned over the next couple of days for my take on Microsoft Surface Hub 2. Nice work, Microsoft.