picture was taken. The camera won a lot of awards but also came with some downsides, too. The Lytro’s opening price point was high at $399, was packaged an unorthodox tube form factor, and the output was a very low 1.2MP. Wouldn’t it be great if you could get this kind of experience on your smartphone and at a much higher pixel rate? Believe it or not, that technology is just around the corner.

One of the biggest improvements to the next generation of smartphones

you are hearing from smartphone technology providers like Qualcomm, Intel and Nvidia is called “computational photography”. Computational photography enables many improvements to taking pictures with your smartphone. HDR (High Dynamic Range) is improved by enabling an always on, ghost-free, motion-blur-free and even a panoramic experience. DVR-like functionality is also being added where you never miss the shot because the camera is taking the picture before you actually take the picture. Face, smile, and special people detection are also being pulled from higher end digital still cameras and pulled into standard smartphones. These improvements are driven by improvements in the ISP (image signal processor), sensors, and dramatic increases in CPU, GPU and DSP performance.

None of this, however enables a Lytro-like experience because of the kind of focusing mechanism used in today’s smartphones. The focusing mechanism just cannot focus the camera fast enough to pop off 3-5 pictures at different focal lengths in less than a second. All of today’s smartphone cameras use what is called a VCM, or voice coil motor to focus the picture. A VCM is a motor using magnets and electrical pulses to change the position of the lens and harkens all the way back to the days of Alexander Graham Bell. In fact, the original VCM patent goes back to the 1870’s. And you thought you were using the latest in technology. 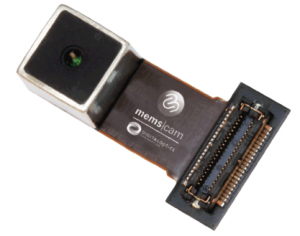 the chance to check out its features and functions. The most disruptive feature is its variable focus technology at high mega-pixel rates. Versus the VCM, DigitalOptics demonstrated that it could focus the lens up to 7X faster than the best smartphone cameras on the market today. This means it could take multiple pictures in rapid-fire succession at different focal lengths. Users can choose the picture they really want after the picture is taken.

“With this technology the industry could be on the precipice of never having an out of focus picture.”

What about the other attributes? Well, the quality is better, it uses 100X less power, and takes up 1/3rdless footprint than other camera assemblies. Sounds too good to be true, right? Not when you dig in and research how DigitalOptics does it.

The mems|cam uses technology recognizable in its name called “MEMS”, or “micro-electromechanical system.” Think of MEMS as tiny machines that have miniaturized almost every other important sensor including gyroscopes, barometers and microphones. These tiny machines are manufactured in a fab just like a microprocessor. They are very small and take a small fraction of power, create less heat, and are more precise versus their large predecessors.

My biggest question isn’t about the technology, but more about why we don’t see smartphones with MEMS-based cameras. First, the technology is being perfected for mass-volume manufacturing and we should see cameras this year with the technology. The market is billions large so you better know how to build them. Then there is the matter of the older-school VCM market. It has a lot to protect and aren’t exactly running to the new technology with open arms. Buggy whip makers were slow to embrace cars, too, until they saw their business crumbling in front of their eyes. This is the scenario I can see coming with this new breed of cameras.

One of the biggest areas of smartphone differentiation is photography. Apple, Samsung, Nokia, LG and HTC all have a great camera experiences in their top 3 marketing list and therefore being perceived as the leader is very important. Now that mems|cam is a possibility for the next generation of cameras, it provides a black and white differentiator for an OEM or ODM. As a strategist and marketer, I would have seen this kind of feature as a huge opportunity. Mems|cam can do something that no other camera can do and it has a black and white reason for doing it better, which is, MEMS technology. I like to call that the “reason to believe” which harkens to “why the clothes are whiter” with the answer being the “magic blue crystals”.

Variable focus technology for smartphones like DigitalOptics mems|cam are a distinct possibility in phones this year and it is something the entire industry should get excited about. Since when has there been such a black and white and demonstrable smart phone differentiator?