Every trade show has its themes inside and across categories, and at this year’s Mobile World Congress (MWC), smartphone modularity appeared to “win” as the biggest themes in the premium smartphone category. The dominant theme was close, as VR creation and advanced imaging were very popular as well across Huawei Technology, LG Electronics, Samsung Electronics, and Xiaomi.

Modularity makes sense, as markets mature, categories try to be more than they are and extend out. Smartphones already ate up phones, GPS, PDAs, point and click cameras, alarm clocks, portable FM radios and MP3 players, so why not a DSLR camera, home stereo, desktop PC, HDTV and a notebook PC? This is the theory, of course, and modularity was very prevalent with Samsung Electronics, LG Electronics, and enterprise smartphone newcomer HP (Hewlett­-Packard) Inc. I want to dive into the LG G5 smartphone, who I believe led the pack in consumer smartphone modularity.

As I said in my analysis of the HP (Hewlett-Packard) Elite x3, the MWC 2016 leader in enterprise smartphone modularity, modularity occurs when a device can “morph” into another device. I have found in my research that success is directly related to the experiential “signal loss” of the base and the extended experience. The base experience can’t sacrifice too many of its characteristics to morph into the another experience or it winds up being poor at everything. A successful example of modularity is a convertible PC, a tablet that becomes a notebook or a notebook that can be used as a tablet, which has gained recent sales popularity. The base use case is a tablet to be held and touched, but when a keyboard is added, it acts as a notebook. Others start as a notebook but can be a decent tablet. Now let’s talk smartphones.

There were a lot of rumors about the LG Electronics G5 and its modular architecture before launch, but the fill scope of it was a surprise. Most of the chatter was about a new way to insert a new battery, but that was about it.

Sure, LG’s battery removal system is interesting, but their modules are more interesting. With one click of a button on the G5, the consumer can pop out the battery and pop in an advanced camera module and a high fidelity B&O audio module. The consumer can then put on their 360 VR goggles to simulate a 130” HDTV experience for regular content or VR “snacking”. LG says they will launch more of these modules and external peripherals in the future. It’s nice to see an extended application that will stress Qualcomm’s latest and greatest Snapdragon 820 SoC with its custom Kryo CPU, custom Adreno graphics, custom Hexagon DSP, custom Spectra ISP, and X12 LTE modem capable of 600Mbps down, 150mbps up. That thing is a beast and it can do a whole lot more than smartphones. 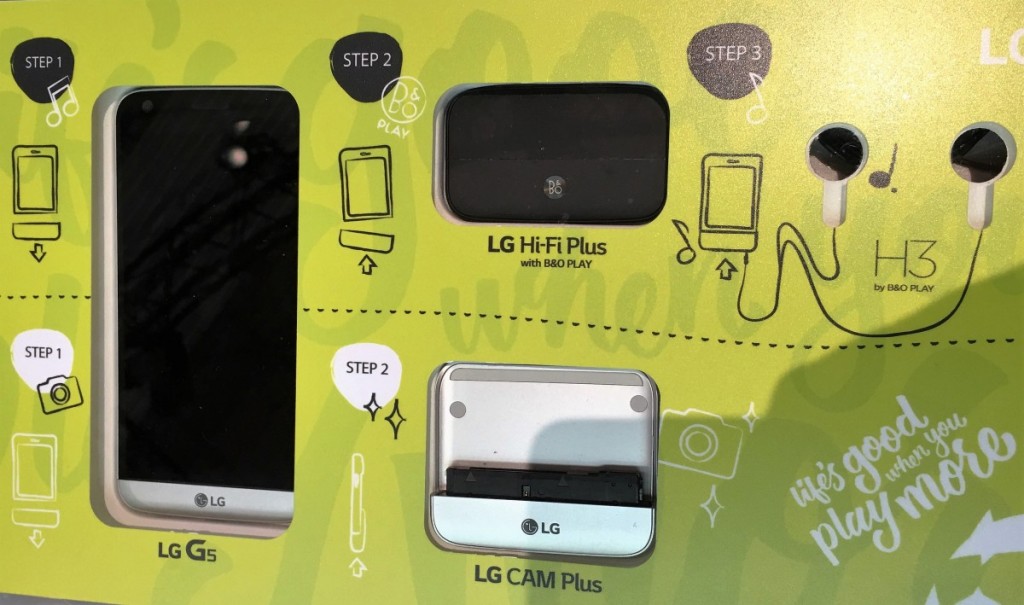 LG CAM Plus a nail in the coffin entry­-level DSLRs?

One of the advantages that DSLRs and point and shoot cameras still have over smartphones is that they fit better in the hand because they are larger and have special buttons to either take a video or photo and focus, they get longer battery life and have a physical zoom. LG Electronics camera module helps just this. 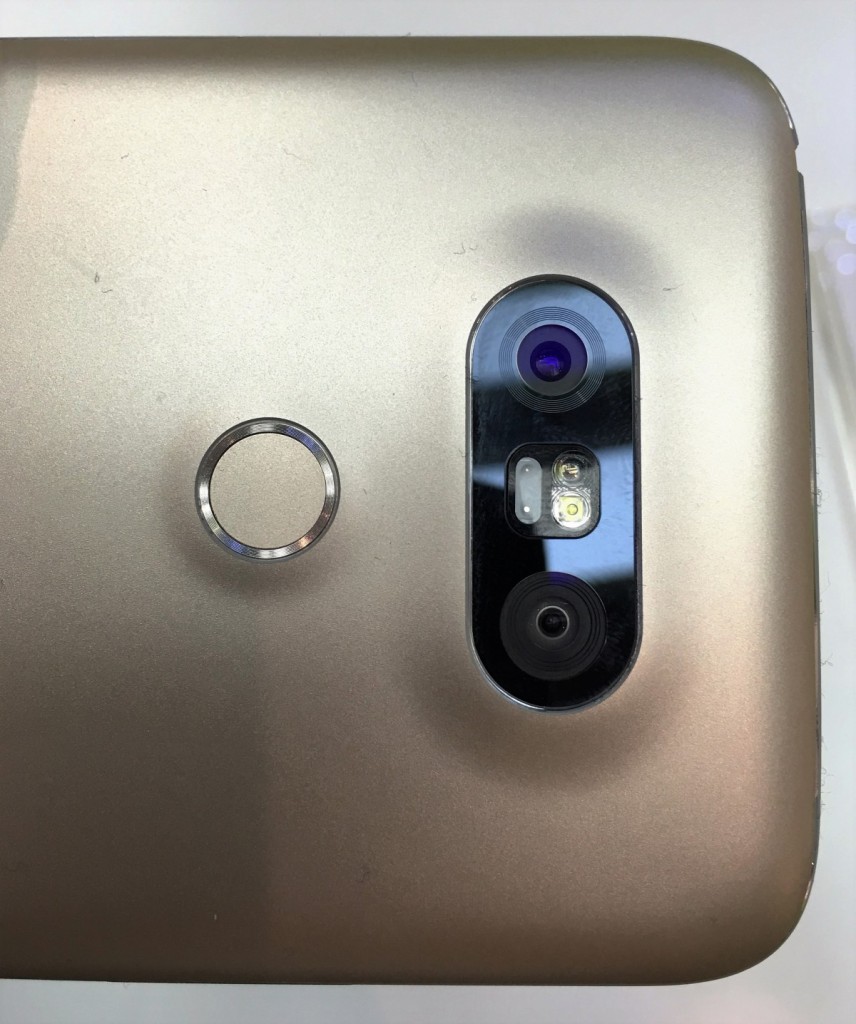 The LG CAM plus adds sturdiness to the frame for a more comfortable grip, adds physical buttons for power, shutter, record, zoom, and LED indicator. It also offers auto focus and exposure lock, features found one dedicated digital cameras. When attached to the LG G5, it provides an additional battery capacity of 1,200mAh to allow for longer shooting times. Why not a physical lens?

LG Electronics believes they have solved this its dual 8MP and 16MP camera capabilities. One is a standard, 78­-degree standard lens and the other a 135­-degree wide angle lens. LG says the 135­-degree lens provides a viewing angle that is 1.7 X wider than those of existing smartphone cameras and 15 degrees wider than the human eye’s field of view. This certainly is a final nail in the coffin of point and shoot cameras, but also moves up the food chain to knock off lower end, entry-­level DSLR cameras. 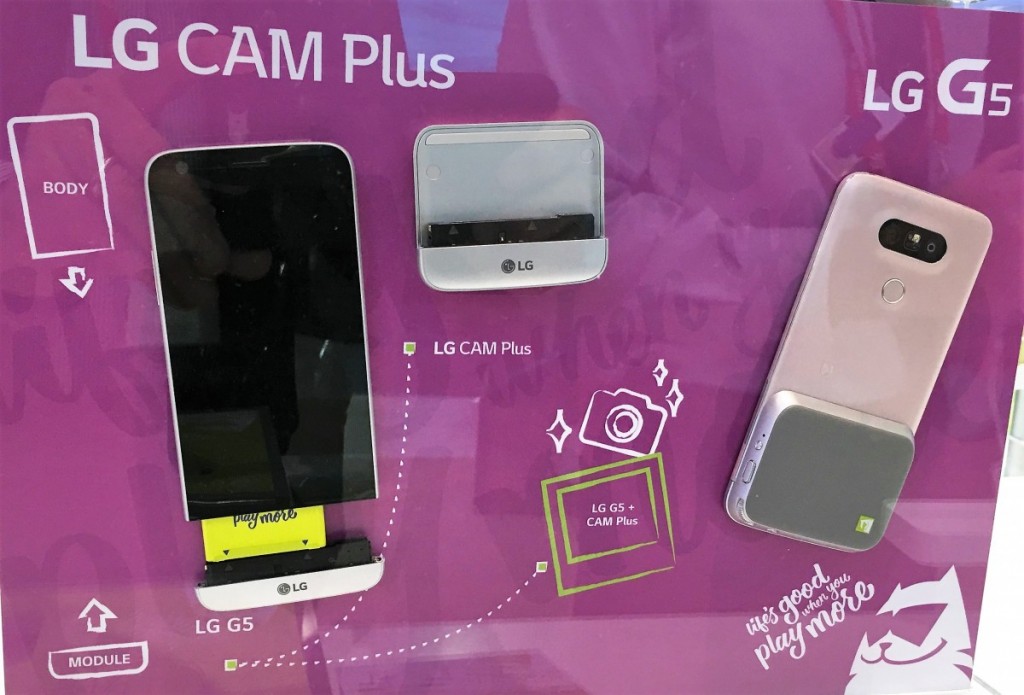 The next module extends the audio entertainment. The “LG Hi-­Fi Plus with B&O PLAY” turns the G5 into a portable Hi­-Fi DAC audio player to help meet the needs of audiophiles who want the best audio who typically have high-­end, in­-rack audio systems. LG’s Hi-­Fi Plus has a “woodsy”, Scandinavian look, 32­-bit Hi­-Fi DAC up-sampling technology, 32­-bit 384KHz high­-definition audio playback. Interestingly, Hi­-Fi Plus can be used either as a module with the LG G5 or as a separate Hi­-Fi DAC by connecting to any smartphone or PC. You literally don’t even need the phone to make this work. Pricing wasn’t provided, but I could see this prices at a premium at $299­-399. It has to really deliver, though, to get this level of a premium. 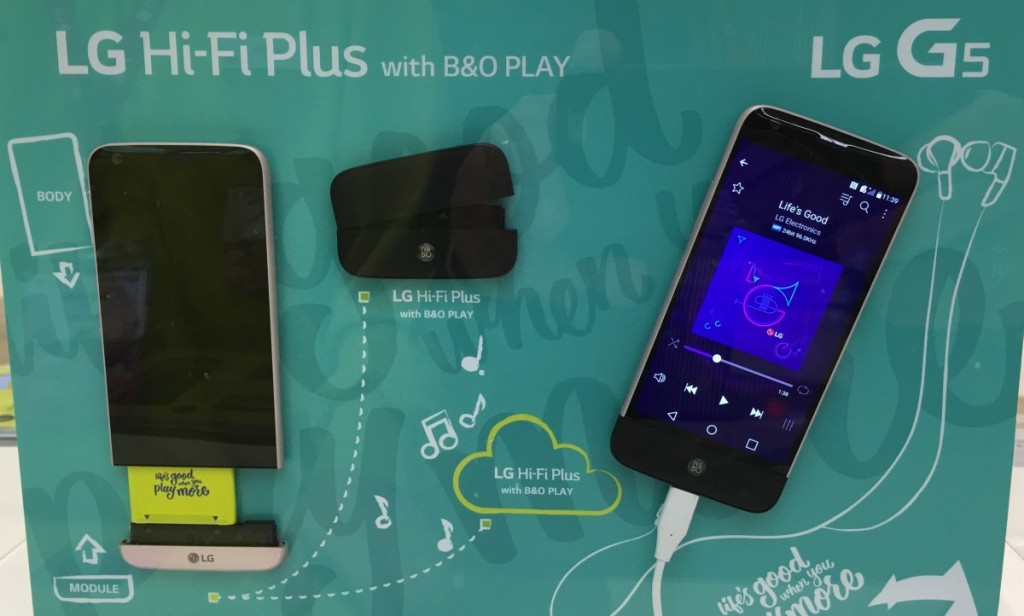 While you would expect an HMD with the word “VR” in it to be focused on VR, I believe LG is actually targeting TV viewing primarily and secondarily for VR “snacking”, or shorter clips. There were a lot of Twitter “complaints” that the LG 360 VR let in light on the side, but that feature actually helps you to not get sick when you are watching longer, non VR movies. LG says the 360 VR simulates a 130-­inch TV viewed from two meters away.

Unlike other VR devices that require the smartphone to be inserted in the HMD, the LG is connected to the G5 via a dedicated cable. The 360 VR only weighs 118g (4.16 ounces) and according to LG, this is one­-third as heavy as competing VR goggles and delivers a higher than smartphone resolution of 639 PPI (pixels per inch). The design is foldable, too, and users don’t have to lug around a ridiculous-­sized HMD.

As for VR “snacking”, the 360 VR HMD is compatible with 360­-degree images and videos captured with LG 360 CAM and Google Cardboard content. This “could” be limiting, but I’ll have to some more research on this. 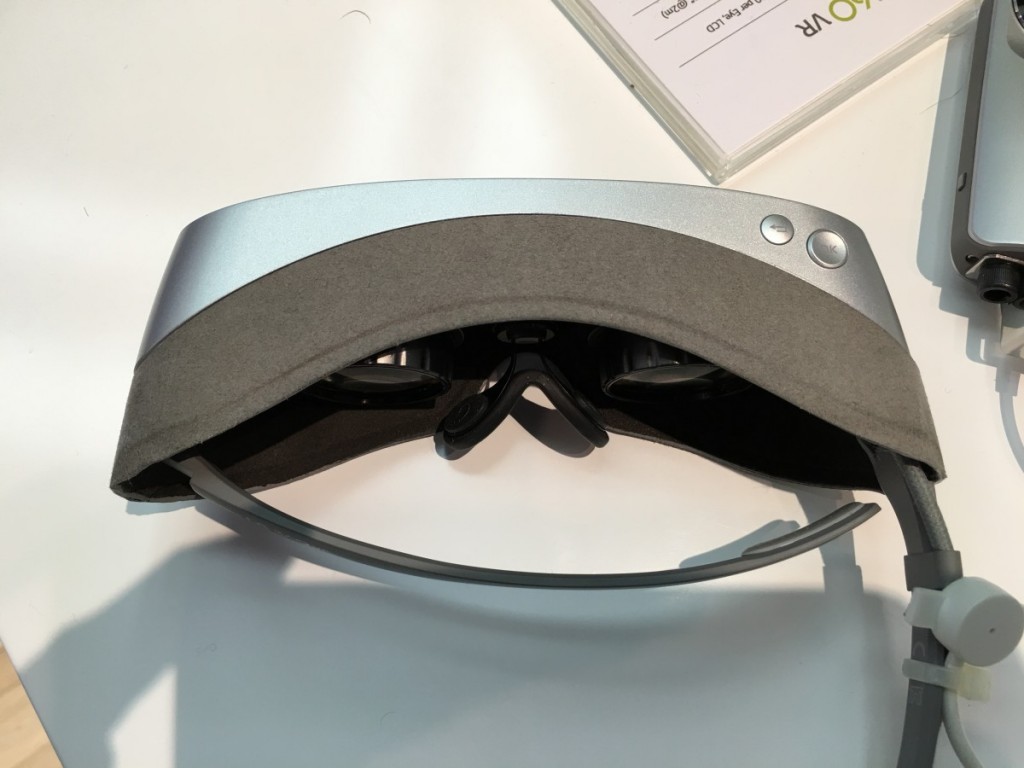 With smartphone growth waning, manufacturers are doing the natural thing you would expect, trying to extend the reach of the device. This happens in many industries, some with good and some with sad endings. There is great debate whether you can incent purchase through modularity. In this specific case, I believe LG can, in part because the base LG G5 smartphone use case is really, really, good to begin with. I like that the audio module can be used with other smartphones, I’m not certain on the 360 VR HMD, and I know the CAM cannot be used with other smartphones. If LG Electronics wants maximum success with their modules, they need to provide consumers some sort of assurance on just how many LG generations the modules are expected to last. LG has made a gutsy decision to extend the G5 use case, and for the sake of the smartphone future growth, it needs to be successful.