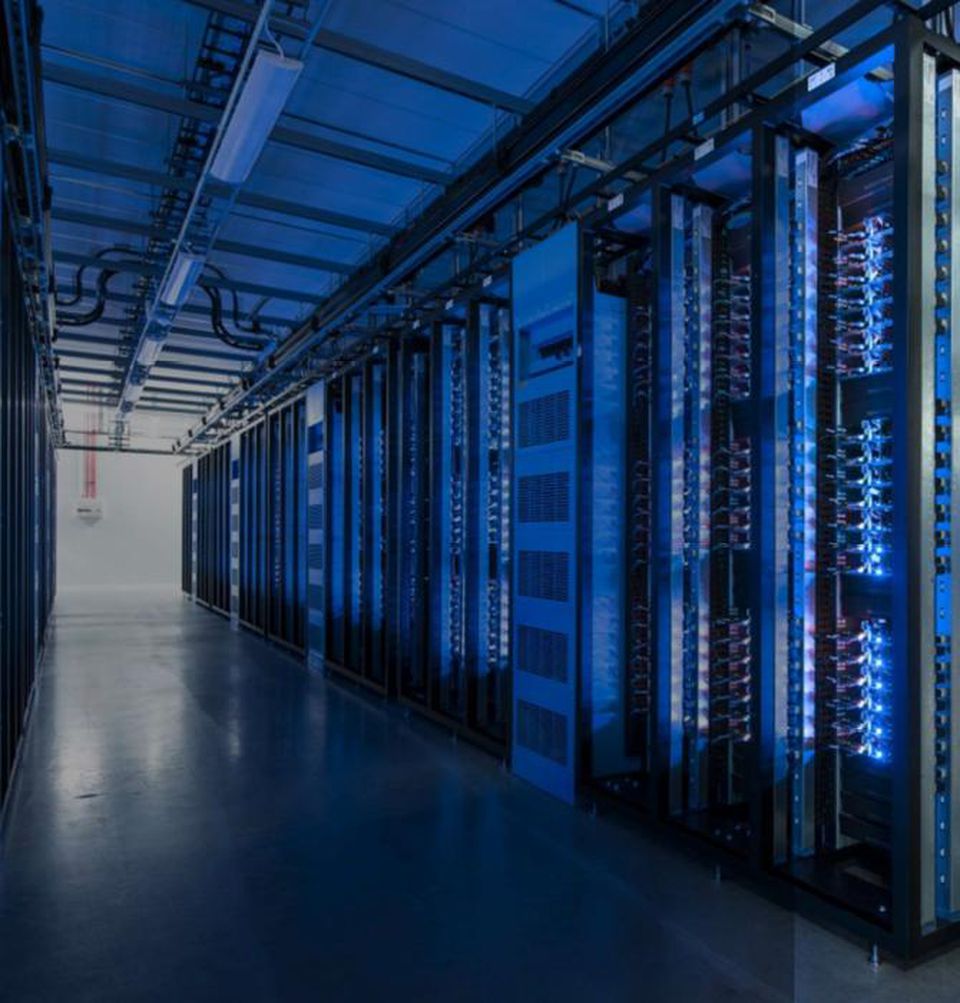 It’s no secret that Lenovo is on a roll in the datacenter after years of declines after the IBM x86 server business acquisition. Lenovo achieved its goal of becoming #1 in HPC Top 500 two years ahead of its self-imposed schedule), and recent numbers for its Data Center Group showed a 67.8% growth in revenue over the last quarter, and an 11% increase in profits year over year. A huge part of Lenovo’s success in driving revenue and unit share is due to its hyperscale business. Just what is it that has allowed Lenovo to shine as a provider to the 250 largest datacenters on the planet? To understand this, let’s take a closer look at the hyperscale segment and one of the company’s main differentiators in the area—its ODM+ strategy.

When we talk about “hyperscale,” we’re mostly talking about the largest cloud giants like Google, Baidu, Amazon, and Microsoft, and some tier 2 hyperscale players like Twitter or carriers like AT&T. Lenovo defines hyperscale as organizations with large-scale datacenters, with a minimum of 5,000 servers, and more than 10,000 square feet in size. There are currently around 250 customers in this space across the globe, 60 of which are based in the U.S. These are huge businesses, with staggering amounts of spend in the $100s of billions in capital expenditures. Google’s capex alone was $30B building out GCP. Overall, hyperscale server purchases, including carriers, should be around 25% of the market, the remainder enterprises.

Most hyperscalers procure their servers from what are called “ODMs,” or Original Device Manufacturers. These are companies you’ve likely never heard of like Quanta, Tyan, Inventec, Foxconn, and Wiwynn. ODMs typically can turn designs quickly, own their factories, and are chosen for cost at a “given” quality level.  Their supply chains are large but not nearly as large as OEMs like Lenovo or Dell EMC. Some hyperscalers buy from OEMs like Supermicro, Huawei, Dell EMC, ZT Systems, Inspur and Sugon to get the higher-quality systems and more global capabilities versus ODMs. Finally, some hyperscalers go to systems integrators like Synnex and Hyve when they don’t have a lot of in-house capabilities.

Lenovo is growing quickly in the hyperscale space. While it would not provide exact revenue numbers, Lenovo did reveal that it is planning for 230% revenue growth from 2016-2019. This was driven by an increase of nearly 5X is custom designs. 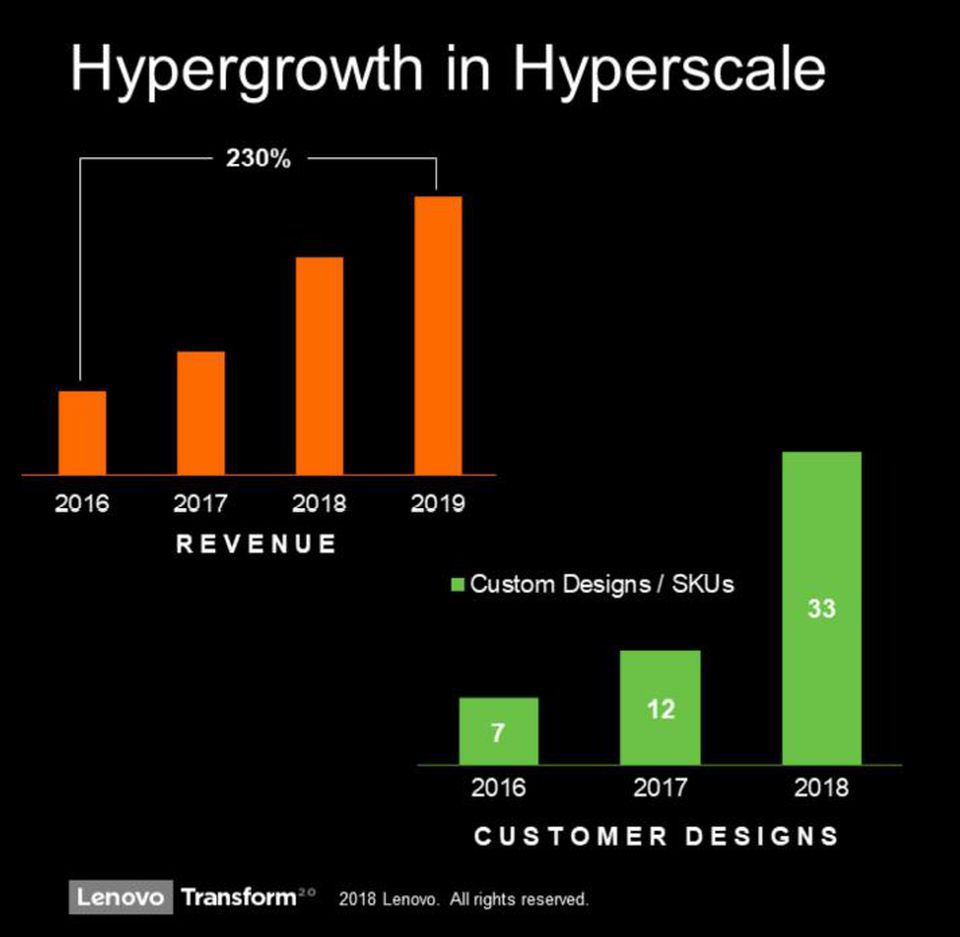 I got the chance to learn more about Lenovo’s hyperscale approach at last month’s Lenovo Transform 2.0 event (read my recap here, if interested). Over the past year, Lenovo has transformed the way it does business with these hyperscale clients. Previously, the company leveraged ODMs for the design of its motherboards, but this model wasn’t sustainable for the company to compete at scale. Lenovo decided to implement a new strategy that it calls “ODM+,” a three-pronged approach in which the company owns its own:

Development and manufacturing- This can shrink TTM on custom designs and lower costs by removing the ODM “middleman” and by leveraging Lenovo’s $20B supply chain. Lenovo has an award-winning supply chain and was recently ranked the #5 best tech supply chain and #26 best of any company in any industry by Gartner. Lenovo’s Heifei PCA manufacturing facility is huge and is 4X larger than the University of Michigan Stadium, aka the “Big House.” Lenovo has six assembly plants in Mexico, Whitsett (NC), China, Brazil, and Hungry. 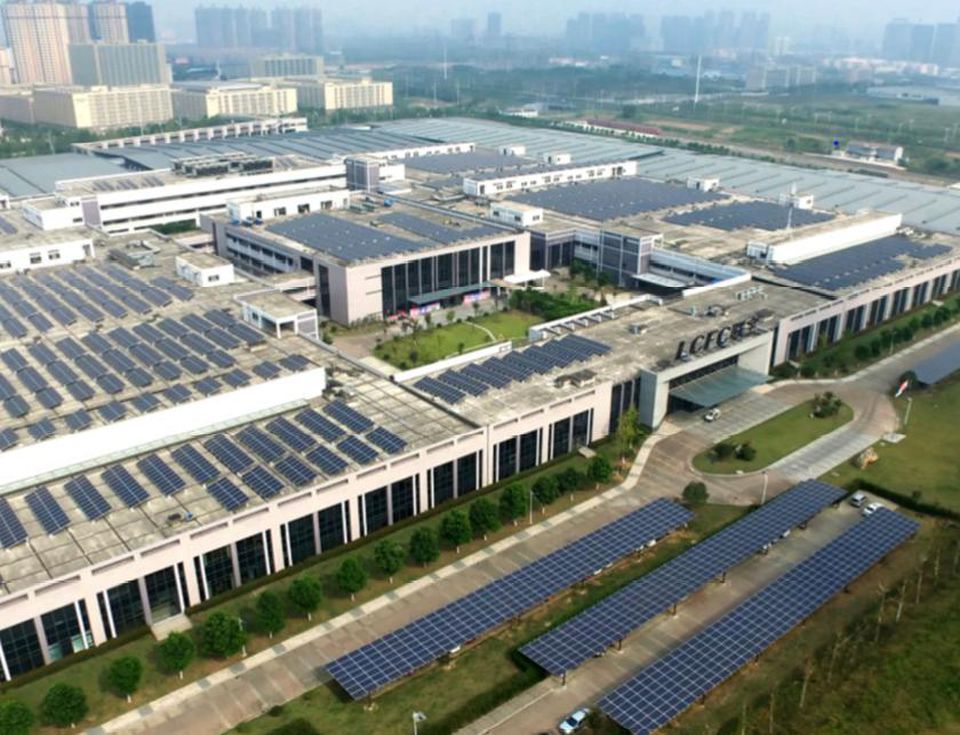 In Lenovo’s words, ODM+ refers to “a business that behaves and functions more than an ODM…with the power and reach of Lenovo.” This past year, in accordance with this business model, Lenovo says it designed all its motherboards in house—resulting in 100% vertical integration. Large datacenters have historically bought from multiple different vendors, which can get convoluted. Lenovo’s positioning as a “one-stop shop” is quite compelling.

It is an accurate statement when the company claims it is the only one in the industry that can claim true end-to-end ownership, a fact that it says has enabled it to attract and pick up even more hyperscale customers. Last year, Lenovo had 3 of the Top 10 Tier 1 hyperscale customers on its roster—now that number is up to 6, with pilots in place with the other 4. Do the math—with any luck, Lenovo will soon be doing business with all 10 of the top 10 Tier 1s. I don’t believe it’s stopping there though—Lenovo says it is also investing in and dedicating a new sales team to picking up Tier 2 and 3 hyperscale customers.

To show off the capabilities of Lenovo ODM+, Lenovo outlined an unnamed hyperscaler. It gives the idea just how massive and difficult it can be to get this business right. With a deployment of 96,000 servers in 3,000 racks.  Consider this hyperscaler is operating in 13 different countries in over 35 different data centers with different power, cooling and even rack dimensions driving the need for 19 custom-designed servers. Yes, I said 19 designs. 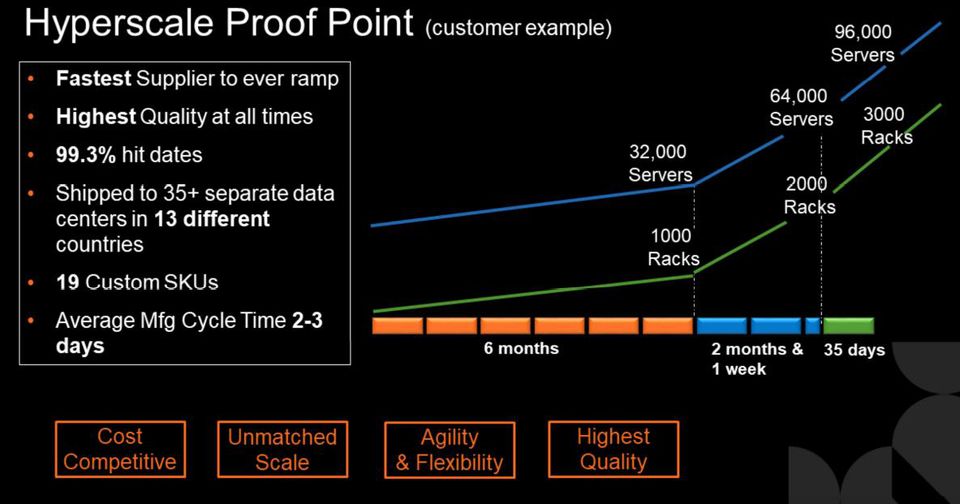 Lenovo may have been a late entrant to the hyperscale game, but I believe that its end-to-end ODM+ model has done much to catapult it toward the front of the pack. The ODM+ differentiation goal is apparent- be faster and more flexible than OEMs, safer and easier to work with then ODMs, and more global and technical than SIs. And unlike many OEMs, Lenovo does its own manufacturing and can crank out endless custom and semi-custom designs. Unlike many ODMs, it has supply chain scale and a global presence. Most importantly, Lenovo has figured out a business model that works right now in the hyperscale market and intends to put the pedal to the metal. I have the popcorn out and will be watching with excitement to see how it evolves.