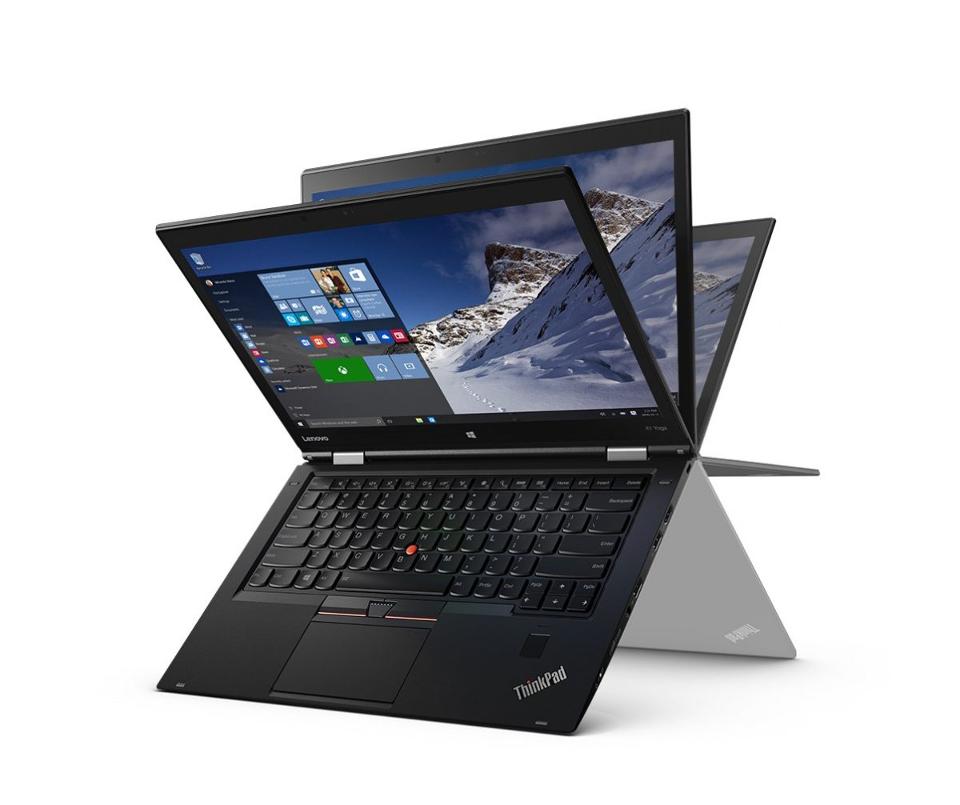 Lenovo recently loaned me two devices for review—the ThinkPad X1 Yoga and the ThinkPad X1 Carbon. While the X1 Carbon is more of a traditional corporate notebook and I reviewed here, the X1 Yoga is a 2-in-1 convertible—it comes with a touch screen that folds 360 degrees around into a tablet. After using the X1 Yoga as my primary device for one week, and secondary device for two weeks, I wanted to offer up my thoughts on the device. I actually wrote a review of the prior generation of the Yoga last year (which you can read here), so I was interested to see if and how Lenovo addressed analyst and customer feedback. I am pleased to say they did.

Starting with first impressions, I like that this device is offered not only in plain black, but also silver. The black is classic Lenovo and looks sleeker than the silver in my opinion—however, it can also be a fingerprint magnet. Choice is good—Lenovo is giving consumers the option to give their device the look they prefer. At 17mm, the 14” display X1 Yoga is also quite thin, and it weighs a mere 2.8 pounds (for comparison, that is lighter than a 13” MacBook Air). Buyers these days are looking for a device that is lightweight and easy to slip into their bags, while still maintaining the integrity of the product as well as the utility.

This is still the only business laptop that has an OLED display, and it makes a big difference in photos and videos. While the 2,560 x 1,440 display isn’t the highest display resolution on the market, it is very responsive and bright. I appreciate that it allows you to manually increase brightness through tiny 10% intervals. I will say that the display is a little shiny, but what else do you expect with OLED? The Intel HD graphics 620 are twice as good as 520, and can handle medium level 2D and 3D programs. I am still holding out for Lenovo to add a discrete graphics option (such as an AMD, NVIDIA, or Intel Iris option), but in the meantime, 620 will get the job done for most corporate productivity apps.

The device’s Core i7 6400U processor is great for heavy-duty business and school applications, and maybe even lighter workstation apps. For testing purposes, I installed and used Skype, Office 365, OneNote, Google Chrome, G Suite App Sync, Google Photos Backup, and OneDrive. From the Windows 10 Store, I also installed Twitter, Facebook, Messenger, Mail, Calendar, Movies and TV. The device runs well with multiple apps and browser tabs open, and absolutely destroys Office 365. I do appreciate Lenovo Companion and Settings as a one-stop shop, but I wish they initialized faster. Also, I want to point out that when Companion redirects me to the Windows Store for Lenovo ID, it is a bit jarring.

As for the keyboard, the keys have good depth to them (1.72mm of travel), are very punchy, and are easy to type with for long amounts of time. I also appreciated that the function keys are mapped with quick actions that will likely be used more than actual function keys. The trackpad is large, responsive, and doesn’t have a noticeable “click.” Another neat feature of the X1 Yoga is that the keys retract when the keyboard is folded into tablet mode—that way you don’t accidentally press the keys while holding it. All of these features considered, it is a mechanical marvel: when it is in notebook mode it feels like an actual laptop, and when it is in tablet mode, it feels like it is an actual tablet. Lenovo essentially invented the 2-in-1, and I think the X1 Yoga is the fullest realization of this family of devices that we have seen yet.

X1 Yoga also comes with a finger print scanner, which is a great security feature and makes it faster to log in. Face scan would be faster and more convenient, but on the other hand, it may not be as secure. I am sure it was a calculated trade-off on Lenovo’s part.
Like the X1 Carbon, the X1 Yoga boasts some of the best port expandability I have seen—a perfect blend of yesterday, today, and tomorrow. One of my thoughts on the last generation was that I would like to see Lenovo embrace the future with Thunderbolt-3 and USB-C connectivity, and the company did just that. It has two Thunderbolt 3 ports, three USB-C, Mini-RJ45, MicroSD, MicroSIM ports, and a headphone jack. All the ports are conveniently placed on the device—reducing dongles, simplifying charging, and enabling nearly limitless external capability.

I appreciate the Qualcomm LTE-A option on the X1 Yoga, because it allows the user to work where Wi-Fi may not be accessible or where more security is needed. This is perfect, if not necessary, for an on-the-go device, and is one of the main reasons people by 2-in-1s in the first place. While I also appreciate the 2×2 AC, I wonder if it is MIMO.

The stylus was a great surprise.  It is responsive, and predicts where you are pointing when you get close enough to the screen. I think this is the right kind of stylus for the occasional note taker. I also love that it recharges itself and is stored and charged inside the device—I always lose pens around the house because there is nowhere to safely secure them. Storing/charging the stylus inside the device is a no-brainer solution that frankly I’m surprised more tablets aren’t utilizing.

The battery life is another big plus—while I was only able to get 9 hours out of the stated 15, it still felt perfect for business applications or the college setting. I rarely had to charge it, which comes in handy for on-the-go activities. I travel all the time, and searching for a plug can be a really big hassle. Long battery life is something I have come to really appreciate and expect from Lenovo’s product lines, and it is good to see them deliver again on that front.

As I always say, there are no perfect products, and as in life, products have trade-offs.  Overall, I really enjoyed the X1 Yoga, and don’t have too many complaints or suggestions. I will say that when I opened the PC, the 360-degree hinge creaked in the beginning, and felt very resistant. At about a quarter of the way up, it started to take considerably more force to open, and I was worried I was going to break the device. It felt better the more I used it (probably needed to be worn in), but I think that is an issue Lenovo needs to address with the next generation. It should not be such a struggle. Maybe explain to users that it needs some break-in time, like a saddle.

Also, the top and bottom bezels (though hidden well) seem rather large. Seems to me like the device could have been made significantly smaller by eliminating most of the right and left bezel. It is possible that the Yoga needs that space for the battery, but this is where eliminating the top buttons on the trackpad could potentially come in handy.

The X1 Yoga’s 720P front-facing camera is decent quality, but 1080P would have been so much better for Skype calling. Also, while this is not necessarily a deal-breaker in my book, some customers who buy a convertible might expect a rear-facing camera (which the X1 Yoga does not have). This would be helpful for tasks such as taking pictures to incorporate into PowerPoint presentations or email.

I’ve been saying this for a while, but lastly, I think the TrackPoint and buttons on the trackpad could be holding it back. While I respect the ThinkPad legacy, perhaps Lenovo could find a way to still pay homage to the ThinkPad’s roots but with a more modern look? My two college interns called the TrackPoint the “red pimple,” and said that the trackpad was “very old looking.” Food for thought—they’ll be in the workforce in two years, and they’re going to have less respect for ThinkPad’s legacy than an industry veteran such as myself.

I liked the X1 Yoga, and I think Lenovo listened to customers on how the product could improve from the prior generation. My favorite things about the device were the vivid, OLED display, and its durable, thin, flexible, and lightweight form factor. Users can get through a full day’s work on this device without having to recharge, and it has the processing power to keep up with their high-performance productivity needs. The newly added USB-C and Thunderbolt 3 ports ensure that the system is ready for the future. Although the X1 Yoga is pricey, I don’t think that will really be a problem for the business market that Lenovo is targeting. The worldwide warranty is also a great added perk. There’s always going to be room for improvement, but overall the X1 Yoga is an easy-to-use device that adapts to your needs in almost every single way. Consider me a fan.