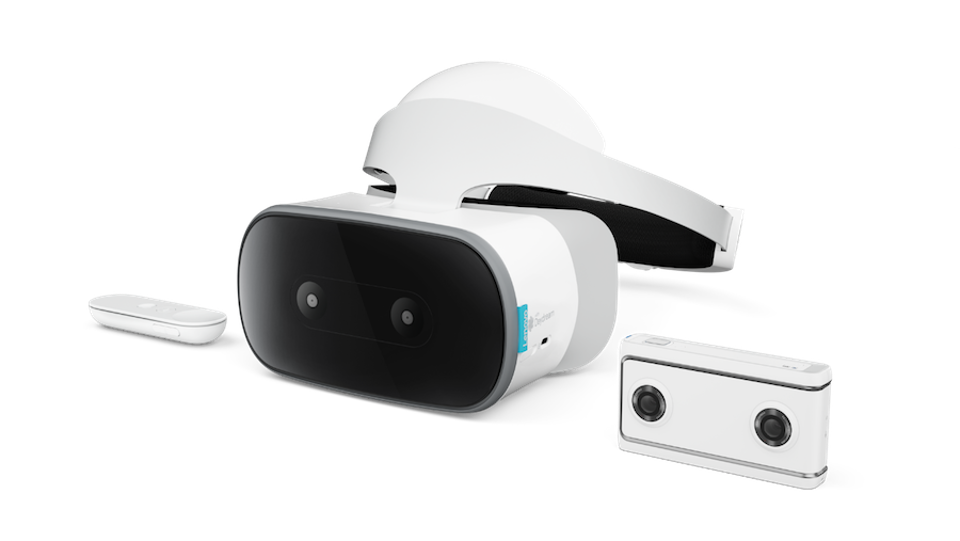 Lenovo is without a doubt one of the companies in the tech industry that are willing to take risks—especially when it comes to new platforms like VR and AR. This is extremely evident in the company’s relationship with Google — Lenovo was the first company to ship a Google Tango AR phone and was among the first to partner with Google on Daydream VR as well. Lenovo was also one of the first to commit to Google ’s new Daydream standalone VR headset program in 2017. So, naturally, it comes as no surprise that Lenovo is taking the lead partner position on two new GoogleDaydream products.

The two new products are the Lenovo Mirage Solo and Mirage Camera. Both feature Google ’s Daydream VR technology and fill areas of Google ’s VR platform that were blind spots in its strategy. While both products are likely to be the first in a series of others that will come from other manufacturers, Google has not had a good track record of getting new VR or AR hardware off the ground. In fact, I was incredibly bullish on Daydream in 2016 and was disappointed in 2017.

What makes a standalone headset more attractive than a slot-in smartphone VR headset (like the Google Daydream View) is that it can address many of the shortcomings of smartphone VR. First and foremost, with a standalone VR headset, you’re able to build everything into a single, larger device. That means the display, battery, and processor don’t have to all be on top of each other and you can build in better cooling to keep things from running too hot. Thermals and performance have been an eternal struggle for smartphone VR solutions, and a standalone headset can even employ active cooling with heatsinks and fans if necessary to keep thermals down. Once thermals reach a certain point, the processor needs to start throttling—causing slower framerates which ultimately can result in sickness.

The first device is the Lenovo Mirage Solo, which is Lenovo and Google ’s first standalone Daydream headset with Google GOOGL -0.09%’s WorldSense. WorldSense is an inside-out positional tracking system, which allows for six degrees of movement (the ability to move freely around virtually any space). What also makes the Mirage Solo a standalone headset is the fact that it has all the processing, connectivity, and display built into it. It is a fully self-contained VR headset capable of operating independently of a computer, allowing it to be fully untethered. Qualcomm ’s Snapdragon 835 VR platform with 4GB of RAM is at the core of the Mirage Solo, which enables many of the Google technologies running on this headset. Google is claiming a field of view (FOV) of 110 degrees, the standard today for most VR headsets (including the Oculus Rift and HTC Vive). Lenovo isn’t giving details on the actual resolution of the display, but it’s safe to assume it’s a 1440×1440 per eye—that’s what the expectations have been for most Standalone headsets.

The Mirage Solo’s self-contained raw performance and its ability to do inside-out tracking already make it an attractive candidate for VR solutions. Without needing external cameras (like the Oculus Rift and HTC Vive), a user can just throw the headset on, and it will start to work immediately without virtually any setup. Lenovo is planning to further prop up the Mirage Solo with VR experiences including a suite of apps that showcase the Solo’s standalone capabilities later this year. Fresh content will be important because right now virtually every experience for Daydream assumes you are seated in a chair or maybe standing up in one place. Such content would be a waste of the Mirage Solo’s movement capabilities.

These developments bring Google ’s Daydream platform much closer to the feature set that Facebook ’s Oculus and HTC  Vive already have on the PC side of things. All of this is going to be available sometime in Q2 of 2018 for $449.99, which I believe is a good price but needs to be lower if it’s going to break into the mainstream market. People will have a hard time spending smartphone-like money for a device that they can’t use as their primary computing or entertainment device until the content is as good or numerous as it is on their phones.
Introducing the Mirage Camera

In addition to the Mirage Solo, Lenovo is also launching a companion 180-degree 3D camera aptly-named the Mirage Camera. This camera is designed to offer easy, 180-degree 3D video capabilities specifically for content creators, including live streaming. While 360 cameras have been all the rage over the course of the last two years, they present some difficult creativity problems for lots of content creators. Hiding from 360 footage is challenging and getting just the right footage is difficult as well. A lot of content creators have asked for a 180-degree VR camera, which Google has developed and dubbed the Daydream camera.

While I don’t entirely agree that 180-degree camera is necessarily the solution to the VR content creation problem, I do agree that it is one of many solutions. It allows people who are familiar with regular cameras to shoot 3D content at a high resolution that ultimately fits how most people consume content. After all, many headsets only have a 110-degree field of view, and most people don’t look behind them when watching 360-degree videos. It also means that file sizes can be smaller, and that streaming content will use less bandwidth than full 360 videos.

The Mirage Camera, as Lenovo is dubbing it, is a VR180 video camera that doesn’t have a screen. Instead, it uses your smartphone as a viewfinder which helps reduce costs, size, and weight, making it very pocketable. Qualcomm ’s Snapdragon 626 SoC powers the Lenovo Mirage Camera, with 2GB of RAM. The camera itself will have 16GB of internal storage, with a microSD card slot for expandability of up to 128GB. The camera will come in two versions, with one featuring Qualcomm’s Snapdragon X9 LTE cellular modem for LTE connectivity, so that it can operate independently of Wi-Fi networks. Lenovo claims that the camera’s removable battery will last for about two hours of continuous usage, which isn’t bad in my opinion.

Lenovo and Google are once again working together to launch another Google -enabled platform. With Lenovo’s Mirage line we are seeing Lenovo leaning in harder into VR than most other vendors. I believe these two new products align with and illustrate  Lenovo ’s goal of being a leader in emerging and new markets. While I am not 100% sold on Google ’s vision for the Mirage camera, I understand where the company is coming from, and believe that it fills a niche in the VR market. I am impressed with the Mirage Solo, but Lenovo cannot be Google ’s only partner on Daydream standalone if it wants any kind of mass-market success. Lenovo ’s first project with Google , the Phab2 Pro AR phone was a very good product but was too dependent on Google  to make it a success with Project Tango. I’m hopeful this won’t be the case for Lenovo ’s Mirage products, but as of yet, Google is the only partner. We’ll have to wait and see what comes next.