Approximately six weeks ago, I made the decision to stop using my iPhone 4s and immerse myself in Android, which I 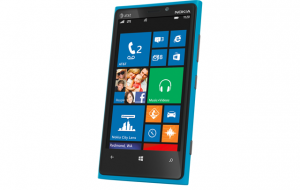 did for about a month.  I wrote about that here.  After Android, I wanted to try out Windows Phone 8 for an extended period of time and I want to share my experiences with you. My goal here is provide some insights into how an American, technically astute Apple iPhone user would feel about using Windows Phone 8.  I don’t represent the masses, but do represent the demographics of a an influential block of analysts, press, pundits, etc.  I will talk about the pros, cons, and things that just didn’t matter one way or the other when comparing my iPhone 4s to the Windows Phone 8 powered Nokia Lumia 920.  The 920 is considered by most as the flagship Windows Phone 8 phone and a good representation of the state of the art.

Let’s start out with the Windows Phone 8 (WP8) plusses.

Camera: While I know this has more to do with Nokia than WP8, it’s important to talk about it as it’s such a core feature.  To be fair, when I am bragging on iOS, I always talk about the iPhone camera.  Flat out, the 920 has the best camera I have ever used.  It has superior low light capability and nearly every picture was in focus.

Responsiveness:  Amongst Android and iOS, WP8 is by far the most responsive operating system.  Screen flows are elegant and very rarely, if ever, did I feel any stutter.  This says a lot given the immaturity of WP8.  It also says a lot about how helpful restricting true multitasking can be.  I’ll touch on that later.

Live Tiles: Instead of icons, WP8 uses Live Tiles, or large icons that display information without actually having to open the app.  The most useful tiles were mail, calendar, and weather.  It was nice to just look at my phone and get a glance at the latest email and appointment without having to open multiple apps or down-swipe a notifications bar.  Sure, it only saves a few seconds, but our minds amplify time savings, so it feels like a lot more.  It also helps in the car, too where I can glance at my phone at a stop light and see what’s going on.

Stability: Flat out, WP8 never crashed nor did any app I was using.  I find this absolutely amazing, given the immaturity of the OS.  I cannot say the same about iOS 6 or Jelly Bean.

Contact linking: I liked this about webOS and I like it about WP8.  I have close to 7 social media or email accounts. WP8 (like Windows 8/RT) allows you to link contacts together so instead of seeing up to 7 contacts for one person, you see only one.  Some of the Android shells do this, but WP8 is flat-out superior at it.  It’s nice, too, that the linking gets shared to Windows 8 and Windows RT devices.

Calendar and contacts: WP8’s calendar worked really well with Google services, but not as well as Android, of course.  It supported adding attendees, accepting meeting notices from Outlook, etc.  Contact sharing with Google was flawless.   This is an area of intense weakness for iOS and I hope to see improve quickly.

The “back” button: Having a back button may sound like a nit, but it is a genuine time saver versus iOS.  iOS requires the double tap on the home button and a selection of the app versus just tapping the back button.  I was surprised at just how much I liked this.  When you hold the back button down for a second, your a screenshot of your last used apps pops up and I really liked that.

Internet Explorer browser: Very simply, the browser worked on all sites and was very fast, and in fact it felt faster than both Safari and even Chrome.  That’s saying a lot.

Full email search: WP8 allows me to do a full search of my email, where iOS just enables people and email title search.

Spell check: Unlike iOS and Android, WP8 gets it right for me more times than not and automatically makes the change.  This was one of those “wow I didn’t know it could get better” features.

People App: This app is unique in that you can organize people into groups, like Favorites and Family and see real-time info on them, like their social media updates, uploaded pictures and comments.

Full photo and video uploads: Unlike iCloud and iOS, WP8 uploads full size photos and even videos to SkyDrive.  To keep battery and broadband fees to a minimum, WP8 gives you the option to only upload over WiFi.  This is awesome as I never need to connect my phone to my PC, which I could never say about my iPhone.

Now let’s move onto the areas that didn’t make a difference one way or another.

Copy-Paste: Unlike Android, WP8’s  copy and paste worked nearly as good as iOS.

MS Office: With WP8, MS Office files can be flawlessly read and Word and Excel can be editred.  As iOS has decent Office “read” capabilities, this brought nothing to the table, so I am indifferent.  When I was doing more “Powerpointing” in corporate America, iOS did make grievous mistakes with many Powerpoint files.  Seriously, who edits Excel on their phone?

Multitasking: As far as I can tell, there is no way for the user to control multitasking at any fine grain level.  Mail, calendar, and social media will sync in the background, but many apps won’t, and it’s aggravating.  Therefore, I must have the following apps open to sync data: Evernote, SlapDash Podcasts, and even Skydrive.  This is a “neutral” because iPhone isn’t much better with user controlled multitasking.

“Page 1” Apps: WP8 lacks in many cases the apps and the depth of apps I want on my phone.  First, there were many apps that were just as good and in some cases better than iOS.  Facebook, LinkedIn, E*Trade, Netflix and Evernote fall into that category.   Many of my preferred apps lacked full functionality, though.  These were apps like Epicurious, Flixster, Yelp and ESPN ScoreCenter which didn’t enable me to login and import saved data or settings.  YouTube wouldn’t let me even upload a video.  The most difficult thing to deal with was some of the lack of my page 1 apps.  These are apps like WatchESPN, Neat, Nike Run, HootSuite, Instagram, Google+, TripCase, Waze, MailOnline, TWC TV, and Pulse.  I use these daily on my iPhone and they were really hard to live without.

App organization: There are two distinct places consumers can organize tiles; the home screen and app screen.  The app screen is a vertical string of apps that is endless.  If you’re like me and use over 100 apps you are left with a string of endless apps to wade through.   This is ridiculous and needs to change. (UPDATE: In app window, holding down a letter will bring up the alphabet where users can pick apps that start with that letter.  Still harder than folders IMO.)

Phone search: I really like the phone Spotlight Search on iOS.  WP8 doesn’t have the capability and I missed it.  What compounds the problem is that there aren’t app folders and I want to search for installed apps.  Contacts were tough too, because it could take three clicks to search on a contact as I need to go into People, find “all” people, press magnifying glass, then type in person’s name.  The frustrating this is that one of three dedicated bezel buttons is search, but it’s just a Bing search.  I wish they would change that to a phone search.

Maps and nav: Apple Maps severely disappointed me because of the inaccurate or incomplete data, but it had a killer experience. Nokia Maps was the opposite; decent data with a challenging experience.  I must caveat that Nokia maps is still beta and it shows. First, most of the times, GPS got stuck for about 10 seconds before it could tell me where I was.  That was more of my impatience, but it felt forever when you’re trying to find out where you are or how to get some place.

About 25% of the time when I did go to turn-by-turn directions, the phone got confused and wouldn’t do turn-by-turn or any navigation.  It would just sit there, confused.  Finally, when voice directions did say where to go, Nokia maps doesn’t give street names, it uses generics. It will say, “turn right in 1 mile”, not something like “turn right in 1 mile at Main Street.”  This was very, very difficult when you’re driving 65 mph on the highway in a big city when exits are packed on top of each other.  I missed many turns because of it.  I hope during their beta period, Nokia saw others recognizes this and made appropriate changes.

I was really impressed with WP8 “feel”, stability and the camera.  Yes, that camera was a real differentiator.  The challenge is there are way too many shortcomings with lack of apps, maps & navigation, and browser bookmark sync for me to make a switch.  When some of the basics are there, I would reconsider, but then again, there will be a new set of “basics” in a year.  I won’t switch from iOS to Windows Phone 8 for now but will now likely switch to Android.  I want to see what Mobile World Congress before I lock into a phone and I will keep you posted on that.