For the last few years, casual home speakers have seen a resurgence, proceeded by the popularity of high-end headphones used on smartphones and tablets.  Sonos has run 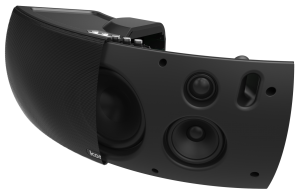 away with the wireless, multi-room consumer speaker system market, but the volume driver has been Bluetooth-based wireless speakers from brands like Bose and Jambox.  Like we’ve seen in many other segments of high-tech and consumer electronics, a new company called Korus and their V-Series speakers could be on their way to disrupting Sonos, Jambox and Bose.

Through the course of doing research with Korus, I have had the distinct pleasure of testing many versions of their new line of speakers.  I can say that I’m very impressed with Korus when compared to Sonos and of course, the litany of Bluetooth-based speakers I have used from brands like Bose.  Specifically, I got to test two different versions of near production-level speakers in their family, the V600 and V400 and I wanted to share my experiences with you.  The first thing I want to go into, though, is one core technology that really differentiates the speakers, called SKAA.

Wireless speakers on the market today typically use two standards for their wireless functionality- Bluetooth or  WiFi.  Each has their pros and cons as I have outlined in detail here.  Bluetooth is built into every phone, but can only support one speaker, is unreliable, difficult to pair, low bandwidth, low range, and high latency.  WiFi, used as the basis for AirPlay and Sonos, is very pervasive, long range, supports 5-10 speakers (1), high sound quality, but it requires a network, has very high latency, low battery life, mid-grade reliability, and takes a long time to pair.

SKAA, on the other hand, utilized in the Korus V600 and V400, takes the best features of WiFi and Bluetooth and combines into one standard.  SKAA is high bandwidth at 480kbps, long range at 65 feet, very reliable and not as susceptible to interference, has low 40ms latency, 20 hours battery life with an iPhone, and is easy to pair and re-pair. The only thing someone can question is that it requires a “Baton” or wireless audio transmitter, in the device that has the music.  I’ve thought a lot about that and as I survey different devices like Logitech mice and keyboards and even a FitBit used with a PC, they all require dongles to get the highest reliability. Both Logitech and FitBit use a dongle because Bluetooth is hard to pair, unreliable and is susceptible to interference. If you want a deep dive on SKAA, check out a research note I developed on it.

Let’s get onto the speakers themselves.

As I outlined above, the Korus speakers use “Batons” to connect to your phone, tablet or PC.  Here’s how I setup the V600 and V400 with my iPhone for the first time: 1/ play the music on the device and 2/ plug in the baton.  That’s it.  While there are just as many steps to setup as Bluetooth, you never have to setup that baton up ever again.  Also, you are never “contending” for control of the speaker like Bluetooth as whoever has the baton has control of the music.

Once I setup my Korus speakers, the connection just stuck.  I got between 30-75 feet of range in my house, and of course your mileage will vary given house build.  Also, when I got out of range, it wasn’t a gradual AM-radio style interference; the speakers just turned off.  That may sound like a nit, but it’s very annoying at a party when the host who uses Bluetooth speakers gets out of range and the room starts crackling.

When I walk into the homes of most of my geeky colleagues, I usually see a Sonos speaker system somewhere inside.  With a Sonos system, you get a wireless speaker system that can have up to 5 speakers playing the same song simultaneously, controlled by an iOS or Android app.  This is great, but comes with many limitations.     The first limitation with Sonos is that you must have their application to play the audio.  That’s great for supported services, but what if you wanted to play the new Google Play Music All Access, a game or a movie?  You’re out of luck.  Even if your favorite service is supported today, given the finnicky nature of content, you may find in the future Sonos doesn’t support it.

The Korus speakers can play any audio content on any player on iPhones, iPads, PCs and Macs. It plays all music, all game audio, and all movie and video audio.  You see, the batons are essentially just a wireless extension of your audio port.  Try doing all of that with your Sonos.  It won’t.

The final example of Korus flexibility I really enjoyed was what I like to call “party-mode”.  This is when you have a bunch of friends over, you’re having some drinks, and listening to some music.  Undoubtedly, someone will say, “have you heard that new song”?  Someone will reply, “yes, I have it on my phone”.  With Korus, I just needed to hand the baton to the one with the song and it just plays.  Try that with Bluetooth.

Korus can play the same song or audio on four speakers simultaneously.  This is really nice when you are having a party or just hanging around the house.  You can adjust the volume via the Korus volume control app, the program’s app, the phone’s device’s volume control, or you can do it manually on the speaker.  There isn’t any lag after pressing play either, when the music starts playing, unlike the WiFi lag you get with Sonos or Airplay.  Needless to say, the multi-speaker capabilities are something no Bluetooth speaker system has.

I will say this right now; I’m no audiophile.  What I do know from working on so many speaker development projects in my career is that everyone is different in what they consider great audio.  I personally like a very rich, bassy sound.  Audiophiles  don’t like any special effects and can notice highs that my ear doesn’t.  What I can do is vouch for my friends and family who thought the Korus speakers sounded great.

My Bose wireless speakers were never used again after the Korus came into the house.

The Korus speakers had some softer, fine points I wanted to share with you.  As Apple AAPL -1.16% has demonstrated so many times, some of the softer adders really make the difference and I think they did as well for Korus.  The first are the handles.  These speakers are designed to be moved around the house or taken with you to someone’s house or even to the beach.  The V600 can also be powered for 90 hours by 6 D batteries.  Even the power cords were thought through well.  They remind me of a much softer and flexible version of an Apple TV cord.  The power cord can be wrapped around the handle to move or to remove cable clutter on a counter-top.  Finally, we have the buttons for power, volume etc.  You touch them, there isn’t a lot of side to side travel, which says “quality” to me.  I think consumers notice these fine points and are more important than people think.  Just ask Apple.

It is always fun to see potential disruptors in markets where you think the innovation is gone.  Korus has demonstrated that there is still a lot of room left in consumer speakers to innovate and disrupt.  When the speakers become available in the fall, I highly recommend checking them out if you are considering Sonos or one of the many Bluetooth-based wireless speakers.

(1) The WiFi 5-10 speaker limit is based upon quality driven by bandwidth and latency.  Sonos speakers can support more than 10 speakers.