It has been interesting how many disruptive and innovative products are 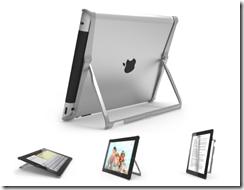 coming through Kickstarter, the crowd-funding site for cool, new ideas. Some of the more famous entries have been thePebble e-watch and the most recent,OUYA, a game console. A former colleagueof mine recently announced a new product on Kickstarter, called the HumanToolz Stand, one of the coolest and useful iPad stands I’ve used in a very long time. While I am a tech analyst by trade and not a formal reviewer, I evaluate 100’s of products annually, and I wanted to share with you my thoughts on this new iPad stand.

I have been a big fan on the future of modularity before it became cool to do so and I have extended the experience of many devices I have evaluated to see just how far the industry has come. Those include the RIM Playbook, Moto Atrix and the Lapdock, Asus Transformer, and of course, the iPad. For the last two years I have been using my iPad as an extended light PC device via the ZAGG keyboard case and the Logitech Ultra Keyboard. OK, so you get the idea; I like modularity. So I was pretty excited when a former colleague of mine, Brett Faulk, told me he was doing an iPad stand on Kickstarter. Of course I took him up on his offer to check it out. 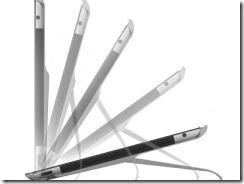 are that I can’t change the viewing angle. Imagine if your notebook were fixed in a single place and think how disappointed you would be. Also, think about how every chair and table has different variables that determine how comfortable you are with a display and keyboard.

What I liked about the HumanToolz Standis that I have nearly an infinite numbers of angles I can situate the stand to match the most comfortable spot for my head, hands, and glare. By going from 0 to 165 degrees, I found I could type easier, almost without the need for an external keyboard.

The HumanToolz Stand, unlike other covers, cases, and keyboards I’ve used, orients in landscape and portrait mode.

For typing and viewing web pages, I preferred landscape mode. For viewing recipes while cooking and viewing documents, I used portrait mode. Most other cases and stands do not do this.

I found the design full of attentive details, similar to the Apple iPad itself. 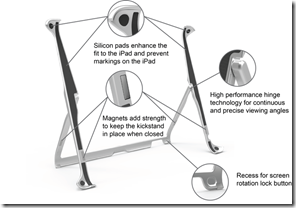 Unlike other stands, cases, or keyboards, the HumanToolz Standdoesn’t consume the entire volume of the iPad. It stylishly clips very snugly to the iPad body with the help of torsion control through the aluminum design, silicone pads, and even magnets.

Cast aluminum is used to give strength, flexibility and light weight the overall stand’s body.

Silicone pads protect the iPad from scratches and provide a snug fit. Magnets are added to provide the stickiness to more closely attach to the iPad body.