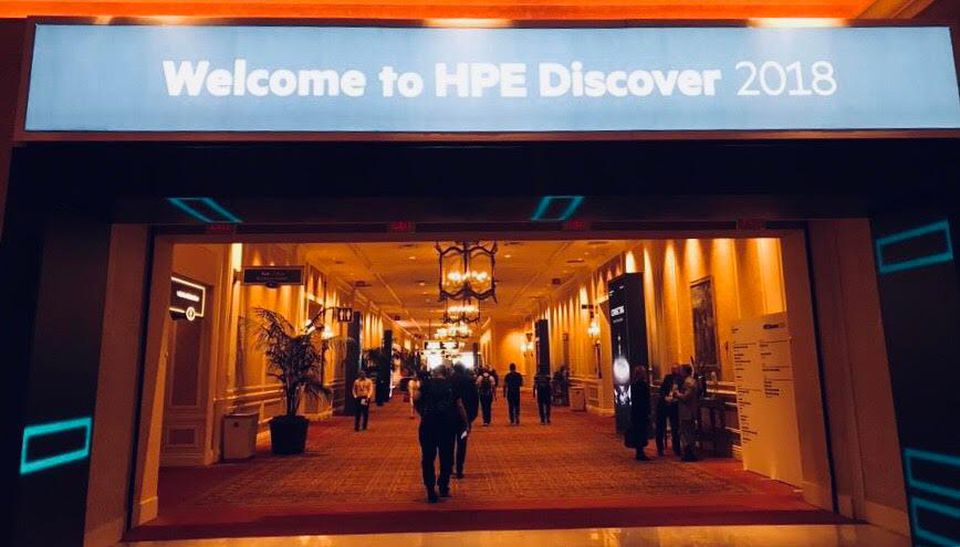 Walking through the doors of HPE Discover 2018. WILL TOWNSEND

No, I’m not talking about the Edge, lead guitarist for the rock band U2. Rather, I’m referring to edge network computing. Data is proliferating at an astounding rate and traditional networking can’t keep up. Software-defined topologies are taking center stage and the benefits are enormous—greater scale, improved agility, lower overall cost, and more. I had the opportunity to attend HPE Discover 2018 in Las Vegas this week with my firm’s principal analyst Patrick Moorhead. Here are my insights and impressions of the event from a networking perspective.

The phrase “intelligent edge” was originally coined by Aruba, a company that HPE acquired just over three years ago. And what an acquisition it was—Aruba has been growing well beyond the networking market for years, with a relentless focus on customer experience and a mobile-first architecture. As HPE embraces the edge broadly and extends Aruba’s vision, it defines it as a place where action occurs. This could be your home, a farm, or a manufacturing plant. Intelligence has subsequently become more portable, moving from traditional centralized data centers to these outlying areas in the form of analytical power, bubbling up from advances in networking, computational power, and device control.

HPE is betting big on this vision, and at Discover 2018 newly-minted CEO Antonio Neri pledged to spend $4B over the next four years to further the tech powerhouse’s depth and breadth around edge solutions. This investment will be concentrated on the development of edge products, services, and engineering activities, encompassing connectivity, security, automation and artificial intelligence. I believe HPE has the capability to pull off a complete end-to-end infrastructure delivery here, given its massive scale in the IT distribution channel and its depth of research and development expertise with HP Labs, Aruba, and other assets.

Aruba looks to disrupt the branch

Speaking of HPE Aruba, at Discover 2018 the networking division announced its entry into the branch with a cloud-managed software-defined solution. This is a strong move on Aruba’s part—I expect SD-Branch will develop into a multi-billion-dollar market over the next 3-5 years. What I like about Aruba’s offering is that it consolidates several devices into a single form-factor that is easy to deploy and manage at the branch, where typically IT staffs are thin. Couple that with a robust, 100+ partner security ecosystem that builds upon Aruba’s ClearPass policy manager, and the company has delivered a solution that will solve real-world customer scale challenges such as the ones cited by Aruba customer Vera Wang in the SD-Branch announcement press release. Aruba claims that its solution delivers increased agility, enhanced security, reduced TCO, and improved availability, and I would agree with that assessment. Availability is slated for July 2018. Hardware list prices start at just under $1500 per gateway with annual subscription pricing starting at $450. That’s truly disruptive pricing and the added operational expense savings should position Aruba well for not only new, “greenfield” deployments but also existing branch locations that are being underserved by less scalable solutions.

I thought HPE brought its “A” game to Discover 2018. The breakouts were a good mix of future initiatives (such as robotics and quantum computing) and shorter-term real monetization initiatives like edge network computing and software-defined networking. Of note to me was that CEO Antonio Neri took over CEO duties from Meg Whitman just over five months ago. Mr. Neri is an engineer by education and spent over 20 years with the company before being tapped to lead. I found him to be incredibly articulate, humble, and extremely deep in his knowledge and understanding of both core technology and the business. As I spoke to many HPE employees at the event, I learned that he has also imparted a positive impact on the corporate culture. I worked for Compaq many years ago and was present when Compaq was acquired by HP . At that time, management was primarily focused on technology and its sales motion. What I find different about Mr. Neri’s approach is his repeated desire to not only deliver business transformation but also improve lives through advances in technology. The latter is a bold statement, and I look forward to seeing what unfolds for HPE in the coming years.