I attended Intel’s Developer Forum (IDF) held this week in San Francisco. IDF, like other’s developer events, is intended to educate and excite hardware, software and service partners. At IDF, Intel also announced a bevy of products, technologies, and initiatives. I believe one of the most interesting announcements made were details on SkyLake, which has one goal of removing all the wires from the future personal computer. Removing all PC wires is an audacious goal, one that Intel very well could accomplish given their success in propagating WiFi years back. Let me go cable by cable and talk about how they may disappear, but I’ll start by talking about SkyLake.

SkyLake is Intel’s next generation chip, the successor to Broadwell which was the successor to Haswell. While Broadwell systems, known now as Core M, are just shipping now, there are parallel teams that have been working on SkyLake for years. SkyLake is a “tock”, meaning that substantial architectural and design improvements will be made. I believe Intel will ultimately reduce power a bit, but primarily deliver substantial performance gains at the same PC power levels. Broadwell was a “tick” which focused on the 14nm process. Intel announced that SkyLake would be shipping in 2H-15.  Now let me talk about removing cables. 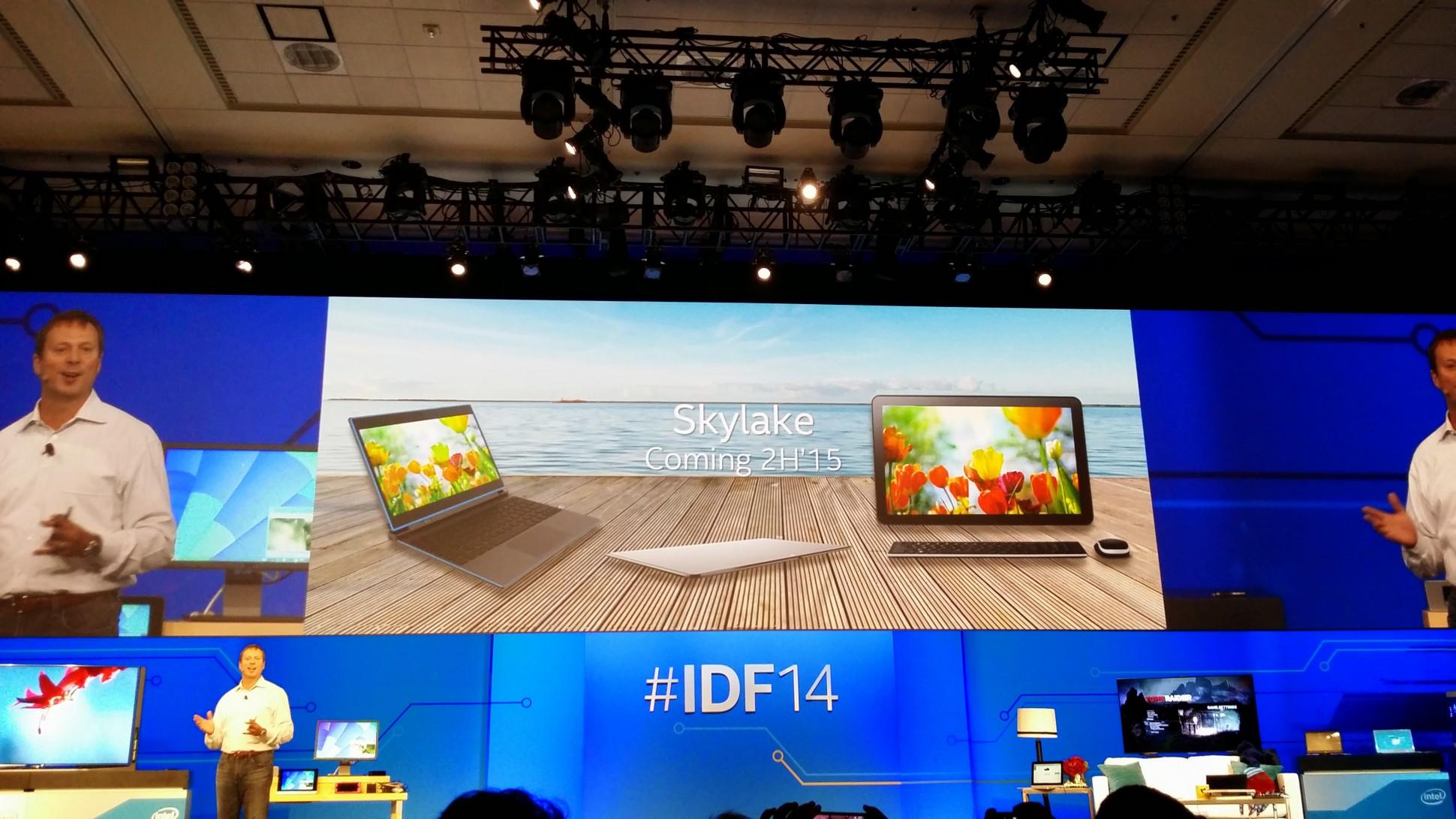 One of the first things I do when I get to my office, hotel room, long meeting room, airline club, or on an international flight is to look for a power cord I can plug my notebook into.

Imagine if you never had to do that and instead all you needed to do was lay your notebook down in a specific area on the surface and it would instantly start charging. Sure, it sounds too good to be true, but what you need to know is that there have been R&D done and had standards bodies working on this for years. Intel is part of the Alliance for Wireless Power (A4WP) which backs a standard called “Rezence”.

The biggest challenge will be to get the charging mat technology into all those offices, hotel rooms, meeting rooms, airline clubs, and airlines. Intel has demonstrated they can successfully do this, just like they did by propagating WiFi with their multi-billion dollar Centrino marketing effort. Emirates airlines, one of the largest international carriers, were on stage talking about their commitment to this technology and to Intel.

The second thickest and typically the most expensive cable is the display cable, the most popular being HDMI, DVI, DisplayPort and VGA. Believe it or not, VGA still lives, unfortunately for slower moving business users.

There are two ways Intel is attacking the display cable problem. The first is through WiDi (think “Wi”reless “Di”splay). Intel has had WiDi for a while, which is a good thing as Intel says there are over 300M WiDi-enabled systems in the wild. Intel has also been working on improving latency, which is important in that you really need low latency to play games effectively. Intel showed 4K content displayed on an LG 4K TV with integrated WiDi. They also showed off a $40 Actiontec adapter for use with TVs and displays..

The other way to remove the display cable is through WiGig (think “Wi”reless “Gig”abit). WiGig is approximately 10X faster than WiDi and therefore can take a lot more data, has less latency, but it has a shorter distance. So WiGig is optimal for a usage scenario when you place your notebook near the display, like in an office. 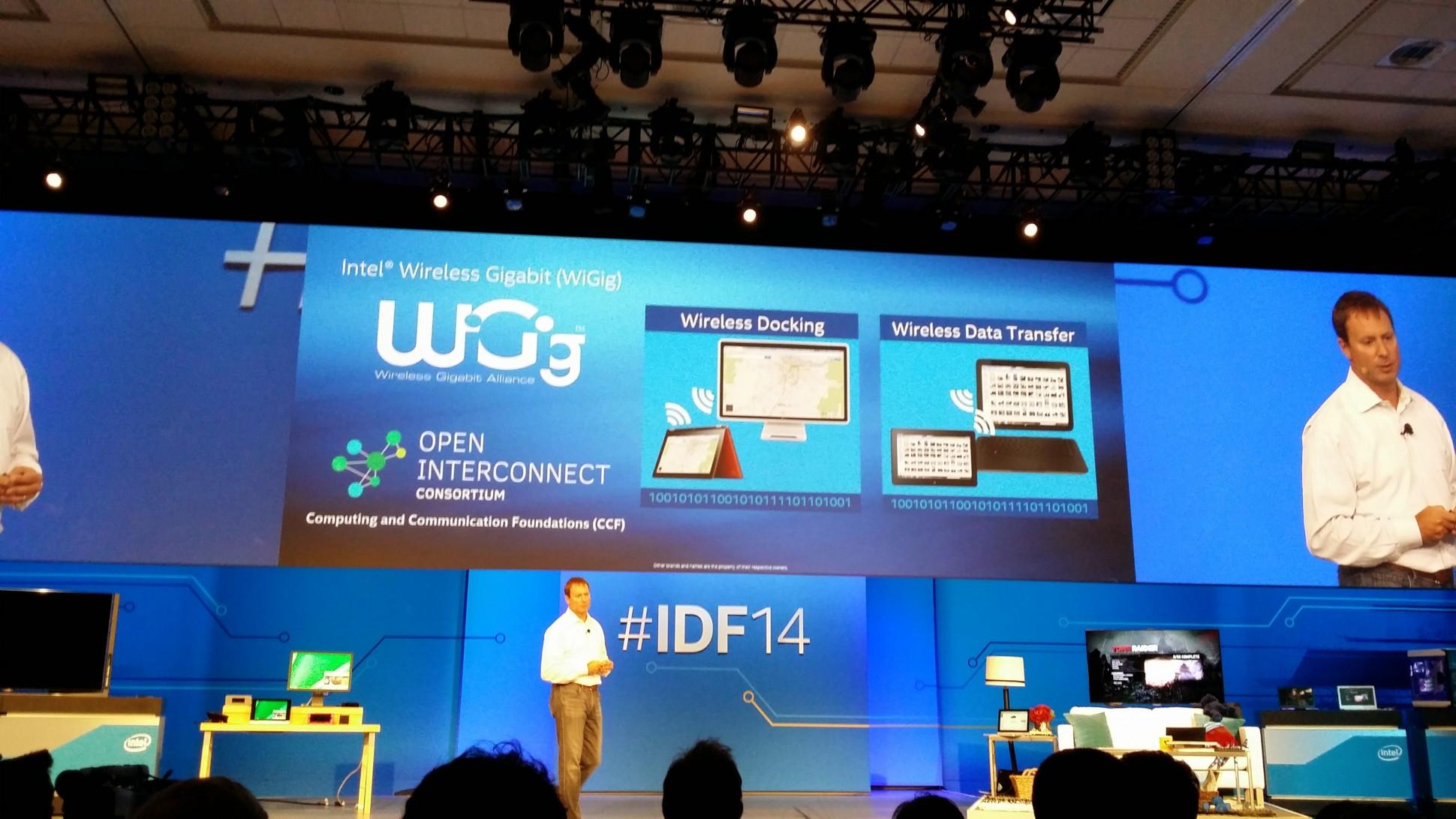 While many USB peripherals like mice, keyboards, printers, headphones, and digital cameras have already moved to wireless, many peripherals still benefit from a cable. These are peripherals like thumb drives, external hard drives, and legacy devices. If you need the USB connectivity, WiGig docks or adapters will provide this functionality. In fact, many of these WiGig docks will not only have support for USB devices, but for displays, wired Ethernet, microphone and audio.

Intel has set out on an ambitious goal of removing cables from the next generation of personal computers starting in 2015. The industry importance of this is to keep the PC platform differentiated and relevant, as the mobile platform players would like nothing more than the PC to wither away and experience a boring death. Intel has experience in getting new PC experiences adopted as evidenced by the billions spent on WiFi and I see the same level of motivation and intensity with removing cables.