Modularity is basically the concept that one device’s utility can be extended to another.  I’ve been researching device modularity since 1996 and have kicked it into high gear over the last few years with phones, tablets and 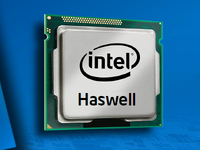 PCs.  Think of how the smartphone has sucked in the GPS, mp3 player, and camera and has the potential to do the same to the TV remote and even auto entertainment.  I’ve been doing a lot of research lately on the potential for a touch-based PC to pull utility away from 10” tablets, and based on what Intel INTC +1.28% has said publicly on Haswell, I think the “2 in 1” case gets very strong.  Let’s start with some grounding and context.

The first day I used the iPhone in 2007, I knew that if that same utility could be shifted to a larger display, it would provide a very good experience.  Many people thought I was nuts where I worked at the time, but based on how the iPad has been received, it was a solid prediction.

The distinction between the iPad and PCs in 2010 was immense:  Notebooks required keyboard and touchpad, lasted 3-4 hours, weighed 4 lbs, could be two inches thick, took 10 seconds to wake from sleep, and required expensive shrink-wrapped software.  You can find some of the gory details on PC of the past here. Of course the 10” iPad looked sexy and operated with finger touch, delivered 10 hours battery life, 1.5 lbs, was half an inch thick, immediately woke from sleep, and had fun apps for $.99.  Net-net, the iPad trumped the PC on many content consumption vectors and the downsides of not running Windows, MS Office, lack of USB weren’t an issue for an extended device. Users didn’t replace the notebook with an iPad, but it augmented and extended the overall compute experience.

If you fundamentally buy into the 10” iPad’s attractiveness on variables of design, touch, battery life, weight, responsiveness, thickness and cheap, responsive apps, we all need to anticipate what Intel’s Haswell offers and its impacts to tablets.  Compared to Intel’s Ivy Bridge, Haswell provides twice the GPU performance, 10% more CPU performance, but most importantly, brings the power down to 7 watts using what Intel calls, “scenario design power” (SDP).  SDP isn’t TDP (thermal design power), but it’s closer to how smartphone and tablet SOC makers measure power. In fact, try to find a spec sheet on how many watts a modern tablet SOC draws.  Good luck.  The typical 10” Android or iOS tablet draws around 4-5 watts at peak power, so hopefully you can see how the world could change with a 7 watt Haswell. Let’s assume that Intel stops at 7 watts SDP and goes no further and discuss potential implications.

At 7 watts SDP, this could enable a tablet, detachable, or convertible with 10 hours of battery life with PC-like performance.  As a tablet, it would require a small fan and if it were a tablet would be a bit thicker than the iPad at 11-12mm, a bit heavier, and more expensive.  The trade-off is you get PC performance and features. Consider a convertible or detachable in this scenario.  You are basically getting the most powerful notebook at the thinnest dimensions with up to 10 hours battery life, always-on, always connected that can serve as a decent tablet under many circumstances.  All three of these form-factor scenarios are powerful, and I believe that this would sway many people to buy a new Haswell-based tablet, detachable or convertible. At this point you need to question just how many consumers will lay down $699 for your typically configured 10” iPad.

Now let me speculate a bit on what could be in store for Haswell.  I have been deep in semiconductors for nearly 20 years, previously working as a PC and server OEM and ran product management, marketing and strategy at a top 5 semiconductor company.  I know processors, graphics, and SOC; their architectures, design, development and manufacturing. Based on what Intel has disclosed on Haswell publicly I believe they could hit a 4 watts SDP in six months.  Think about this.  I’m speculating, yes, but this could mean a fanless tablet as thin, light, with similar battery life to today’s iPad but with PC-level performance.  This could be the game changer as it would guarantee a “2 in 1” as it relates to 10” tablets. At that point, the only debate is price.  No, Intel’s competition isn’t standing still, but, nonetheless, Haswell will be a real disruptor to the entire 10” tablet ecosystem over the next year and I believe a boost in PC sales.

Disclosure: My firm, Moor Insights & Strategy, has provided research, analysis, advising, or consulting to many high-tech companies relevant to this article, including Intel, ARM, AMD, Nvidia NVDA +0.07%, Qualcomm QCOM -0.31%, HP, and Dell DELL +0.98%.  No employees at the firm hold any equity positions with any companies cited in this column.