There’s been a lot of discussion about “disaggregated” servers, racks and datacenters since Facebook and Intel promoted their vision for the phrase at the Open Compute Summit at the start of this year.  Haven’t we spent the last few decades disaggregating datacenter architecture? And if so, what does disaggregation mean now, is it something different? I’ll try to be succinct as possible, but if you want a very deep dive, you can find it here. 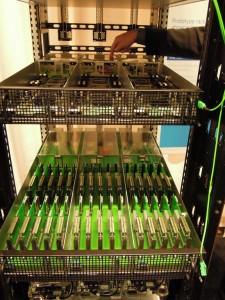 Strictly speaking, to “disaggregate” means to divide an integrated whole thing (an “aggregate”) into its component parts.

In many respects, Calxeda, AMD and HP are “re-aggregating” computer architecture.  They are packing compute, storage, and local network fabric into a more tightly-integrated rack-level architecture to optimize east-west data flow at a local level.  Instead of carving datacenter architecture into its component pieces, they are throwing components into a blender for a more fine-grained approach to optimizing hardware for specific workloads.

Intel’s overt disaggregation goal is to separate compute and storage within a rack, but those resources are already separate.  What makes this proposal different?  Physically separating main memory from processor cores is different.  It requires new memory architectures, and more than anything else it requires a huge leap in available network bandwidth to bridge that physical distance.  This will be expensive.  It will require bundles of fiber optic cabling and Intel will have to design an entirely new class of switch architectures to support it.

A future Intel disaggregated rack design might have a few trays of processors, a few trays of system memory, lots of trays containing a mix of SSDs and HDDs, a distributed east-west fabric to tie all of those trays together, and single, consolidated datacenter network interface for north-south data traffic.  That consolidated network interface would take the place of today’s top of rack (TOR) or end of rack (EOR) switches, effectively pushing those switch vendors out of the disaggregated datacenter.

A potential bill of materials profile for this looks interesting for the high value applications Intel will target.  With Intel’s Open Compute Project partnership, Facebook will be the first software-as-a-service (SaaS) vendor on their block to take advantage of new analytics economies of scale, including Intel’s investment in open source analytic frameworks like Hadoop.  It should be a very happy product development arrangement for both Facebook and Intel.

One of the high value markets such an architecture would open up for Intel would be large in-memory transactional systems – i.e. mainframe replacements.  IBM is reacting to this potential threat with OpenPOWER, a wildcard competitor for ARM’s server licensees.

The disaggregated server rack is not intended to take over the entire datacenter.  But it will be interesting for many classes of Big Data analytics and it just might (finally) displace mainframes.  If you want a deep dive on Intel’s Disaggregated Rack, you can find a very deep dive in a whitepaper here.