Intel has been on a constant march with their newest product announcements and this year’s CES is no different. Their latest 5th Generation Core Architecture part was announced yesterday was a follow up to late last year’s announcement of Intel Core M. Intel Core M was based upon Intel’s 14nm manufacturing process node and was the company’s first 14nm part, the first Broadwell part, and could get as low as 4.5 watts, enabling fanless designs. 2014 saw Intel’s PC business rebound, which further encouraged the company to accelerate their pace of innovation and product launches that continues to push Moore’s Law forward. Intel is now taking the entire Core line into 14nm improving graphics, video battery life and to me more importantly, adding some very intriguing platform additions that could very well inspire businesses and consumers to upgrade sooner.  Let’s dive into the nuts and bolts.

This latest 5th Generation of the Core family of processors brings a multitude of improvements in performance and efficiency in places where it is most needed, graphics and video. This is accomplished thanks to the process shrink from 22nm to 14nm which allows Intel to build a 1.3 billion transistor processor with the Core i7-5600U at 82mm which is 35% more transistors in a 37% smaller die size compared to the Core i7 4600U with the Haswell 22nm architecture. With IRIS graphics, Intel’s processors can get up to 1.9 billion transistors on a 133mm^2 die size, which is significantly lower than the 1.3 billion transistor 181mm^2 die size of the previous generation.

The newest generation of Intel’s HD graphics with the HD 5500, 6000 and Iris 6100 series graphics are designed to bring Intel’s processors into the future with support for a multitude of current and future technologies. Those include DirectX 12, OpenCL 2.0, 4K Ultra HD, HEVC and VP9. They have also added all of these features without sacrificing battery life or performance, and in fact they’ve increased battery life in some cases by over an hour. 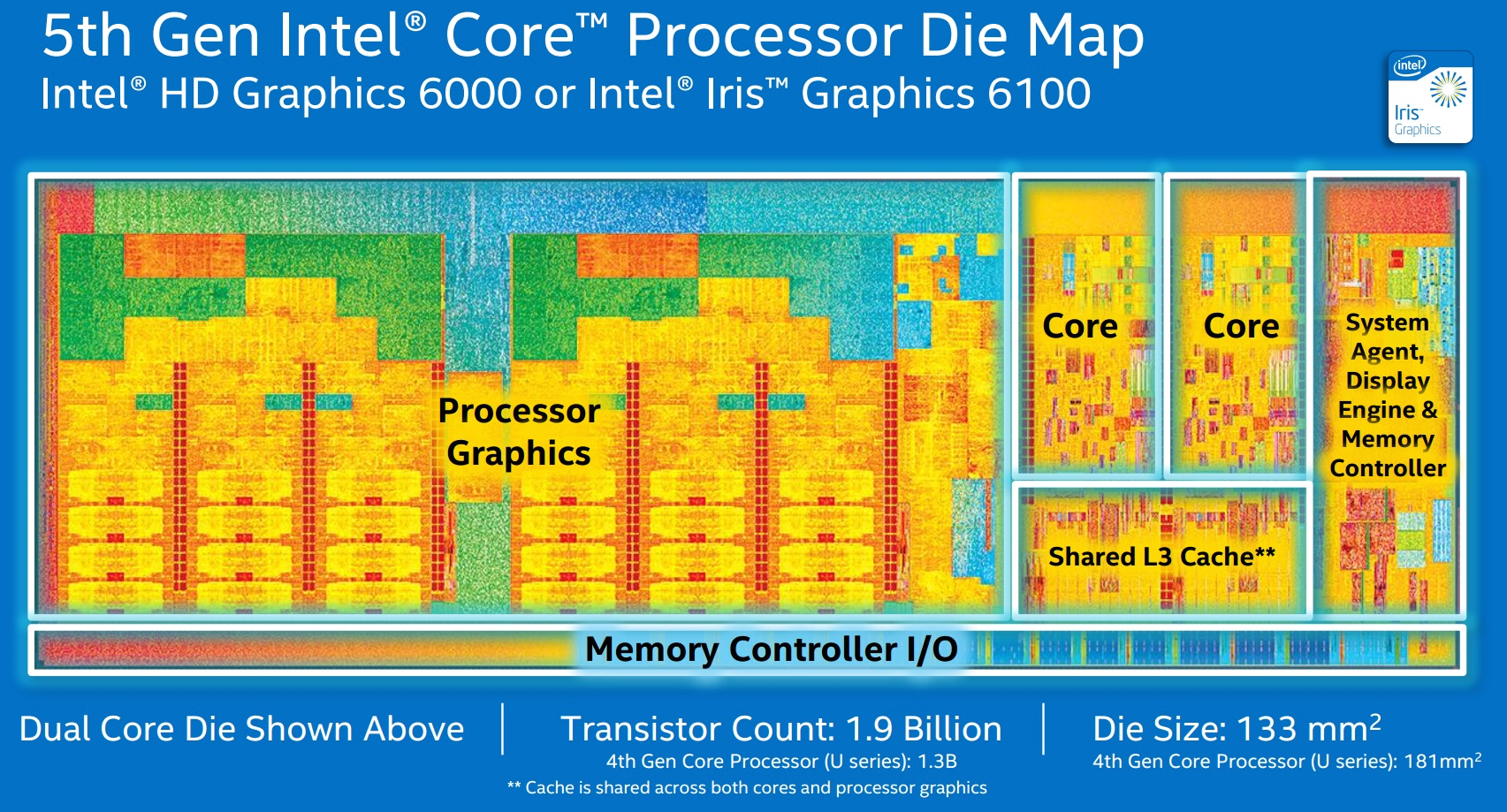 The GPU continues to be one of the biggest parts of Intel’s processors, and continues to find greater relevance as a result of higher resolutions,  more demand for PC gaming, and the enablement of GPU computing. Intel’s graphics drivers have only been improving and the support for the APIs like DirectX 12 and OpenCL 2.0 should both bring added performance and efficiency to Intel’s platforms. All of this can be accomplished with little to no additional cost to Intel or their OEMs and helps keep the company’s products competitive.

Of note, the Broadwell socket is the same as prior generation Haswell, meaning it will be relatively easy for OEMs to add Broadwell to Haswell designs. Sure OEMs still need to do thermals, regulatory, and integration testing, but they don’t have to “turn” a new motherboard.

But Intel’s 5th Generation processors don’t only have improvements inside of the chip, there are also some significant improvements to the overall Intel platform which make the newest generation even more attractive. While Intel did a fine job on the chip itself, I’m more excited about some of the special platform features. A lot of those improvements are designed to improve user interaction with their PCs as well as to simplify the connectivity.

One of those technologies is Intel’s RealSense technology which is Intel’s own camera system that is designed to sense depth and digit movement in order to create new ways to interact with the PC. Intel also improved their voice recognition capability with Voice Assistant and which is supported by a more robust hardware DSP in the processor. Intel has been one of the biggest proponents of new interfaces with the PC, including touch and they continue to push new interfaces which include gesture and voice. While I think it will take a while for these technologies to become mainstream, the early adopters and early majority will jump all over these in 2015.

Intel also upped their connectivity capabilities with improved WiDi and Wi-Fi connectivity. Their new WiDi supports new resolutions, including 4K Ultra HD and business ready applications. The 4K WiDi demo I saw looked great and appeared to connect faster than previous versions. The Intel Pro WiDi capabilities allow for security, manageability, user privacy and presenter controls that businesses will want. Intel is also bulding an Intel WiDi remote for easy dual screen management, making the new platforms more business friendly in a conference room. That’s cool. There is also a new WiDi adapter and price point that they are pushing a new HDMI stick form factor which sells for a meager $40, making WiDi far more attractive as a whole than it was before. WiDi has been a sort of sore spot for Intel as it has generally been difficult to use and loaded with bugs, but it appears that Intel has sorted a lot of them out with this latest generation, which they may need to market in order to make it better known as a feature.

What I’m most excited about is wireless gigabit docking. Today, when I come into my office I’m either forced to plug my notebook into a gangly docking station or I plug in a RJ-45 network cable, HDMI cable, a printer cable and a USB dongle for a full size wireless keyboard and mouse. With gigabit wireless docking, all I need to do is plug in power. When Intel enables wireless power, I won’t even need to plug in power. Not a single cable. Now that’s cool.

Intel originally introduced Broadwell with Intel Core M, however that market is fairly limited and the reception towards it was focused in the commercial market, although that appears to be changing here at CES. With the new 5th Generation Core products, Intel has a much better opportunity to show off the strengths of the Broadwell architecture and the overall benefits of the new 5th Generation platform around it as well.

We are already starting to see new laptops with Intel’s 5th generation of the Core architecture that is enabling some of the thinnest, lightest, and longest battery life that we have ever seen on a laptop before. Some great examples from CES that seem promising include the Lenovo LaVie Z series of 2-in-1 convertible notebooks as well as the new Thinkpad X1 Carbon. We will also very likely see 5th Generation Core updates on other products that are cyclical as well, which include Microsoft’s Surface tablets as well as Apple’s line of Macbooks which will both very likely come later in the year. There is almost no doubt that both Microsoft and Apple will happily adopt these new Core i5 and i7 processors into their future products especially when you take into consideration all of these improvements that they can tout.

While later than desired, Intel appears to have done it again, a nearly flawless transition.