This week, Intel announced the release of two new 8th Generation Intel Core Processors, the U-series and the Y-series of mobile processors for thin and light laptops. The six new chips that make up these two series are the latest additions to a long series of 8th generation chips (read my coverage of the initial launch here) and according to Intel, were designed to bring new levels of connectivity and long battery life to laptops and 2-in-1s. Net-net, the new chipsets use a Kaby Lake Refresh CPU fabbed on an improved 14nm++ fab process to deliver higher boost frequencies and have improved WiFi and audio. I’d like to talk about what was announced and why it matters.

The U-series for thin notebooks with fans

The U-series, previously code-named Whiskey Lake, is a 15-watt part and comes with up to four cores and eight threads and are positioned by Intel as offering “incredible performance in power-efficient platforms.” As these parts are 15-watt parts, notebooks will come with fans but can still be thin. This U-series are the first chips from Intel to deliver integrated Gigabit Wi-Fi to thin and light laptops and should bring over 10 times the performance of a five-year-old notebook with the right antennas. Notebook OEMs architect their antennas differently and sometimes cheap out by only having one antenna, not two in a MIMO format. 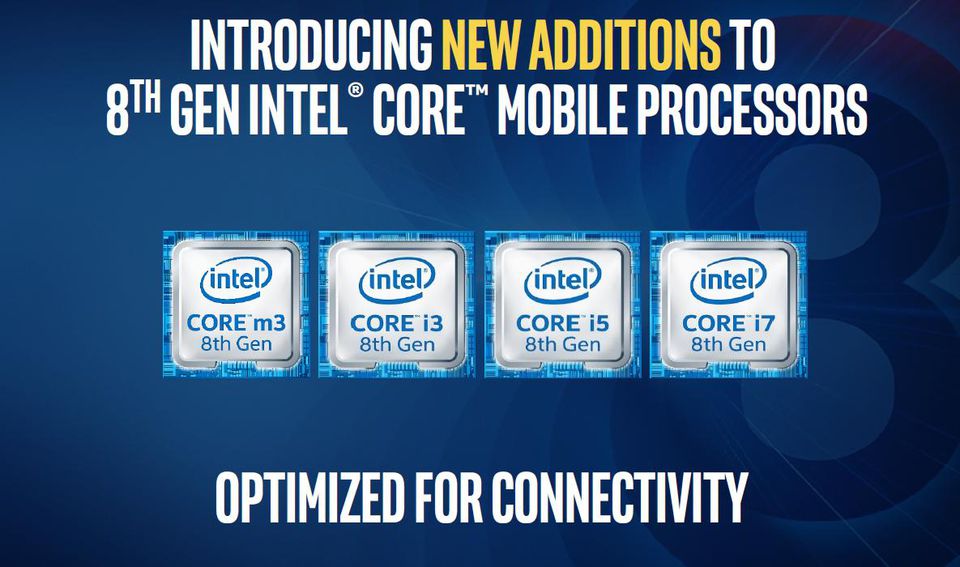 Intel will be positioning these new chips as “optimized for connectivity” INTEL
Intel is also leaning into battery life and says the U-series can extend the battery life of laptops and 2-in-1s up to 16 hours on a single charge (and around 19 when power-optimized). It almost goes without saying, but battery life is crucial for these devices—what’s the point of ultra-portable, lightweight PCs if they must be plugged into a charger all the time?  Users will likely never get 16-19 hours of actual usage out of these devices as this is measured by MobileMark, which accentuates idle modes, not actual use, but still even if its 75% of that, that’s pretty good for a full-sized notebook. One thing Intel is doing on the platform side is to invest in the ecosystem of 1-watt panels, which draw 50% less power. The OEMs I’ve talked to say it gives these classes of notebooks an extra 5 to 6 hours battery life, a very big deal.

Intel is leaning heavily into its WiFi AC capabilities this go-around and expect it to be marketed heavily.  With better WiFi technology comes faster sharing, streaming, and downloading of content (including UHD content from Netflix, Amazon Prime, and the like). It’s worth noting that Intel is the first PC graphics provider to run Netflix movies in 4K HDR. On a related note, U-series processors are also capable of supporting Dolby Vision HDR and Dolby Atmos immersive audio. All of these things considered, the U-series looks like it can support quite the home (or on the go, for that matter) theater experience. In the research we have conducted, or I have read, watching videos on a notebook PC is preferred over watching on a phone. This makes sense as you can just pop open a laptop with its large display on the couch or your bed and not have to hold it.

Intel is also leaning into editing and sharing 4K/360 video and talks about smoothly streaming and playing popular games like World of Warcraft: Battle for Azeroth. Users could do all of this with SkyLake-R with its doubling of CPU cores but compared to a five-year-old notebook, no way.  The U-series also features support for multiple voice services, including Amazon Alexa and Microsoft Cortana. With voice assistants becoming more and more popular, this optimization seems like a smart move. I am expecting to see notebook OEMs better utilize these voice assistants this generation.  I’ve been a bit disappointed more OEMs didn’t lean more heavily into voice assistants earlier.

The Y-series for fanless notebooks

The Y-series chips, previously code-named Amber Lake, are balanced for mobility, and are geared towards super thin and light devices (weighing less than 1 pound, and less than 7 millimeters thick). Y-Series chips operate at a 5W TDP, so designs can be fanless and have 2 cores and 4 threads.  Like the U-series, these chips also feature Intel Wireless-AC for Gigabit wireless speeds, as well as Modern Standby and eSIM support for connectivity within Intel’s Gigabit LTE Modems. Intel wasn’t clear on which Intel modems would be supported, but I must assume they are CAT9. We will have to wait to see what the OEMs do. OEMs have been way behind smartphone vendors in terms of LTE speeds and I hope we may see someone sneak in a CAT 16 modem with the proper 4×4 MIMO antenna support. Having proper Windows 10 modern standby means users should be able to close their notebooks and still get emails, calendar updates and Skype calls.   I am looking forward to getting my hands on one of these notebooks with LTE to see if this works.

There is a lot more competition in the fanless Windows notebook chip space these days with Qualcomm entering, so it’s important for Intel to lean into its fanless performance and app compatibility.  Intel isn’t saying much on its performance, so we’ll have to wait for reviews to see if the 14nm++ process and boost algorithms actually improved benchmarked performance.

Finally, to improve interactions with PCs, Intel is saying the Y-series features improved touch and stylus interaction. There aren’t any details on this, so we’ll have to wait to see how this gets turned into something with OEMs like Dell, HP, Lenovo, Microsoft and maybe Apple. Net-net, while this latest T-series isn’t hugely different from its predecessor, products OEMs will be bringing out will better take advantage of the silicon with thinner and lighter designs.

While Intel certainly would rather be in the market now with 10nm U-series and Y-series, it’s not, but that doesn’t mean it’s going to pack up and go home and not make as many improvements as it can to incent purchase and stave off the competition. Intel still commands 90% of the notebook processor market and fielded as competitive as 15W and 5W notebook processors as it can. The reality is that Intel’s biggest threat is that users with 5-year-old notebooks don’t upgrade. The new Y and U-series do deliver a black and white better experience over those old notebooks in almost every use case, including productivity, web, games, video editing and do it with 3X the battery life.  All of this can be delivered in a thinner, lighter form factor that may connect 10X faster over WiFi and may even come with LTE. PC manufacturers will start shipping the U-Series and Y-series within devices this fall and many have announced at IFA Berlin—I look forward to taking one for a spin.