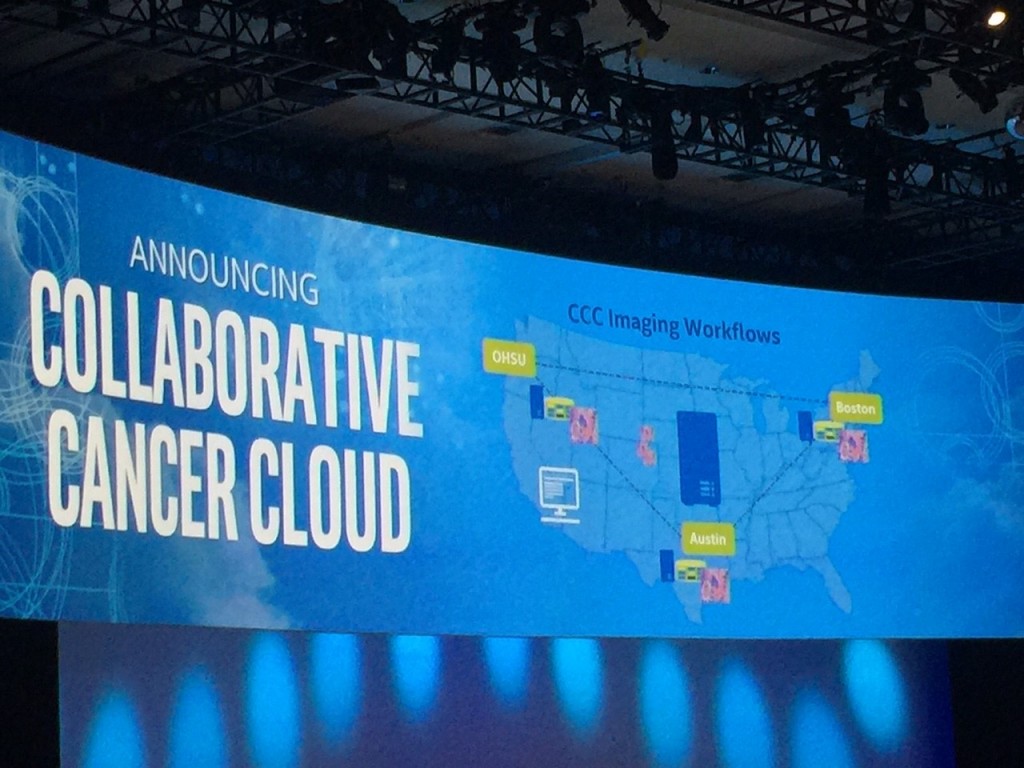 Two weeks ago my colleagues, Patrick Moorhead (@patrickmoorhead), Jimmy Pike (@SR_fellow), and I (@skydevr) attended the Intel Developer Forum (IDF). This show is the place where hardware and software developers go to gaze upon new technologies, platforms, and solutions coming out of Intel. Like most vendor conferences, there was considerable hype, fanfare, drones, and dancing spider bots. In the keynote presentation, Intel’s chief (and master of the spider bots) Brian Krazanich (BK) rolled-out Intel’s vision for the future of compute. Married to the reality that compute is becoming more and more personalized, BK rolled out 3 key assumptions for the future of compute: Sensification (sight, sound, and touch), Smart and Connected Everything, and an Extension of You (physical meets digital: wearables, etc.).

From a Sensification perspective, Intel has doubled down on their RealSense technology. Intel’s RealSense is a platform and set of tools that allows developers to build applications that extend visual applications and smart sensors. Examples include visual and navigation sensors for responsive robotics and drones, 3D scanners, and cameras.

Smart and Connected devices are where Intel’s Internet of Things (IoT) platform resides (basically, and end-to-end reference architecture/model). One of the key announcements Intel made was on security. They announced an enhanced security solution called EPID (Enhanced Privacy Identification) which is in effect a silicon level root-of-trust that allows secure and anonymous communications for IoT applications. Intel noted that over 250,000 developers are using their IoT Zone within their developer program. We at Moor Insights have identified over 150 platform technologies for IoT ranging from horizontal development platforms for gateways, data management, to vertical applications for healthcare, energy management, and even farming. We believe Intel is in a good position to bring a solid development platform from the edge to the cloud.

Finally, compute becomes an Extension of You. This ranges from wearables, analytics, and personalization in fashion and shopping. One of the next big things to come into the wearable market will be high-end wearable technologies for watches, jewelry, and sportswear. The intersection of devices and analytics will change the way athletes are coached and trained, industrial field service is conducted, and how doctors collaborate to develop individual treatments for their patients. To further this notion, Intel brought out the first IoT BMX bike. While the example was over-the-top, it did represent a sea-change in not just how data can be used, but the amount of data that is going to be pushed into the cloud, and how our professional and personal lives will be changed.

Our Take: Intel is doing the right thing with RealSense. They are spot-on with where the market is going. Even if the presentation is gimmicky, the message is solid. The connected world is a reality, and Intel is positioned to take advantage of the space from the datacenter to the edge. Unfortunately, BK will be remembered as the King of the Spider Bots.

Data is the Currency of the Digital Economy

Two of the biggest themes at IDF were reiterated: IoT and Big Data. One of the key challenges Intel  outlined is the challenge when collecting, aggregating, and turning the data into useful information. IoT and Big Data have become a part of our everyday lives. According to Jesse Vollmar, CEO of FarmLogs, 25% of row crop farms in the US are using Big Data (cloud) and IoT (edge) to make better decisions and make their farms more productive.

One of the most compelling solutions for developing IoT applications is the Wind River Helix App Cloud solution. Wind River’s solution dramatically accelerates the speed of development for creating and running applications at the edge or end-point. On the surface, this looks more like a remote debugging tool, but it is much more than that. Of note, developers do not have to change or configure network setting to access remote devices. Moreover, devices can be accessed via public or private internet. This solution is not restricted to just Intel; other boards and chip-sets can be accessed by Helix as well. Developers can now maintain, update, and customize connected devices from design to deployment and beyond.

The number one reason for companies not leveraging or integrating Big Data is the inability to make sense of the information. Intel has made significant investments in the development of an easy-to-use, customizable open standards Big Data platform. Another major barrier to adoption today is the lack of skills. Business Intelligence is mature, enterprise grade, and steep in knowledge of SQL. Big Data is orthogonal meaning practitioners need to have knowledge of a myriad of different environments, skills, disciplines, and languages. To bridge this gap, Intel announced StreamingSQL which resides on top of Apache Spark. This will help companies quickly process, analyze, and gain real-time intelligence from their data. Further, this solution will allow organizations to make it easier to deploy Big Data solutions without having to reinvest in a skills gap. We believe this was one of the most important announcements made at IDF, especially as more and more companies begin to rely on Big Data to improve their businesses.

Another key announcement by Intel was Discovery Peak. Discovery Peak has been under development for the past three years and is an open source, integrated stack, analytics platform, and cloud software platform to accelerate the development of cloud-native applications and data-centric workloads. One of the most interesting applications for Discovery Peak was an initiative with the Oregon Health & Science University to deploy the Collaborative Cancer Cloud (CCC) that allows doctors and hospitals to share patient genomic data for developing individualized treatment plans and lifesaving discoveries. Sharing this data will take what normally would be months to build a genomic profile for each patient and turn it around in days, thus improving the speed of customized treatments. Currently, Intel is standing-up CCC datacenter instances in Portland, OR; Austin TX; and Boston MA. Eventually, Intel will partner with other organizations to launch similar programs to tackle Alzheimer’s, diabetes, etc. This is one of the most significant and useful proof points for Big Data that I have seen in the industry, period.

Our Take: There were several announcements from Intel to show their Big Data/analytics prowess. The biggest challenge for Intel—and everyone else for that matter—is the inability to ingest and manage the forthcoming amount of sensor, meter, and business data. Of particular interest and differentiation is Intel’s recognition and willingness to bridge the skills gap between Business Intelligence and Big Data. Data Science as a discipline and profession is expanding. The specific demand for practitioners who understand Big Data, machine learning, Bayesian networks, Gaussian functions, clustering, artificial neural networks, support vector machines,etc. is getting bigger. These are the new intellectual athletes, and there is no shortage of demand. Intel should position itself to provide a platform and playground for this next level of scientist.

This might be a character flaw (or not), but I love to walk expo floors. Seeing innovation up close and personal is exciting. On the expo floor there were several themes that carried the day: Rackscale/Hyperscale, Gaming, NFV, Storage, and IoT. Some of the companies we visited with are worth noting.

Rackscale/Hyperscale: Inspuris one of the largest cloud and technology service providers in China. They are also one of the original contributors to Project Scorpio. Project Scorpio was designed to establish hyperscale datacenter standards for the BAT companies (Baidu, Alibaba, Tencent). Of particular note is Inspur’s aggressive move into the US marketplace. At IDF, Inspur announced its InCloudRack, designed to eliminate bottlenecks in I/O interconnections, and the construction of distributed networks through what they call the UNE (Unified Network Engine). UNE allows for centralized pooling and unified resource scheduling via Inspur’s homegrown software. While they are entering a crowded marketplace, Inspur has a solid track record, strong reputation, and battle-tested technology that will serve them well.

Our Take: Inspur is entering a crowded and complex marketplace. Customer and partner traction will be their defining factor as they enter the US market. Inspur and other rackscale/hyperscale vendors need to fundamentally understand the needs of the top >100 datacenters prior to executing their strategy. Failure to understand this need is at their own peril.

Network Function Virtualization (NFV): NFV is the more successful cousin of Software-Defined Networking (SDN). This concept leverages technologies to virtualize or link together network node functions to create communications services. While there was not much on the news front for NFV, it was good to see Hewlett-Packard’s OpenNFV platform continue to evolve and impress. There has been considerable progress with marquee customer Telefonica to bring in additional services from orchestration, servers, storage, and networking. Alcatel-Lucent (ALU) was also on display with a convincing user interface for their NFV platform they call CloudBand. ALU’s CloudBand platform was, in essence, a unified interface for their Motive OSS platform and Nuage’s virtualized services platform with some ALU IP integrated throughout. What was very compelling was their ability to showcase a unified and holistic view of the entire NFV infrastructure.

Storage: Another interesting technology was Mangstor’s non-volatile memory (NVMe) flash storage solution that accelerates application workloads within datacenter environments. Their NVMe over Fabric Flash Storage Arrays have received high accolades from the industry. Mangstor has done a good job of differentiating itself from other existing Flash appliances. While they are still a start-up they have the resources, team, and technology that should ensure their success in an industry that is certain to see massive change.

Our Take: The storage industry is hemorrhaging. Top executives are jumping ship, especially from the likes of EMC. There are rumors of consolidation in the marketplace especially with VMware rolling-up EMC or another top provider. Hewlett-Packard’s storage group has been losing money for several quarters, and Dell has become the outlier (simply because they are private now). At the same time, software-defined storage and object storage software seems to be the rage from companies like Mangstor, Nexenta, and hyper-converged solutions from the likes of Nutanix, Cloudia, and even VMware with EVO-rail are emerging. However, as my colleague Jimmy Pike noted, flash has been steadily growing in capacity and declining in price, most importantly 3D XPoint NVRAM from Intel and Micron Technology (which allows the DRAM array to include nonvolatile memory as normal system memory). Bottom-line, we are seeing significant and enormous growth in flash solutions. High capacity hard disks are becoming the final resting place for data. Companies building new datacenters, or adding capacity, need to focus on software plus servers with lots of nonvolatile memory or servers with a lot of disks.

This was just a sample of the interesting technologies we saw at IDF. There were plenty of solutions, servers, software, and stuff that made it worthwhile. One of the things that was most notable was the amount of start-ups that were pushing industry stalwarts to the brink from an IP perspective. The amount of innovation at the IoT, robotics, and device or edge level was massive. Paradoxically, the level of datacenter innovation at the cloud level seemed to be huge too—especially from players in the high performance computing (HPC) space like Dell, Inspur, Hewlett-Packard, and others. This space knows what its customers need, and it’s a race to deliver on that promise. It will be interesting to see where the chips fall.