As I’ve said many times, getting certified on an AT&T network on voice and data is recognized as one the most difficult networks if you are a chipmaker or a device maker. AT&T is “proud” of its networks, but if you can get your communications module and/or device (phone, tablet) certified there, there’s a good chance you can get it certified anywhere in the world. This is why Intel getting a win on AT&T is a pretty big deal for them. While the Intel 7160 LTE modem was AT&T- certified previously, devices weren’t, that is, until the Asus Padfone X mini showed up a few weeks ago. And at $199 without a contract, the Asus PadFone X mini pretty much blows all other AT&T GoPhone contenders out of the water for the value. I got the chance to use one for a few weeks and wanted to give you some of the highlights.

The Asus PadFone is unlike any device I’ve used before. I’ve always been a “future modularity” fan, as I believe that at some point in the future, I think we will have wireless compute and storage modules that beam UI and information to a multitude of displays in our homes, cars and work. The PadFone is here and now today and uses a physical connection, not a wireless connection, to connect its 4.5″ phone to its 7″ tablet. 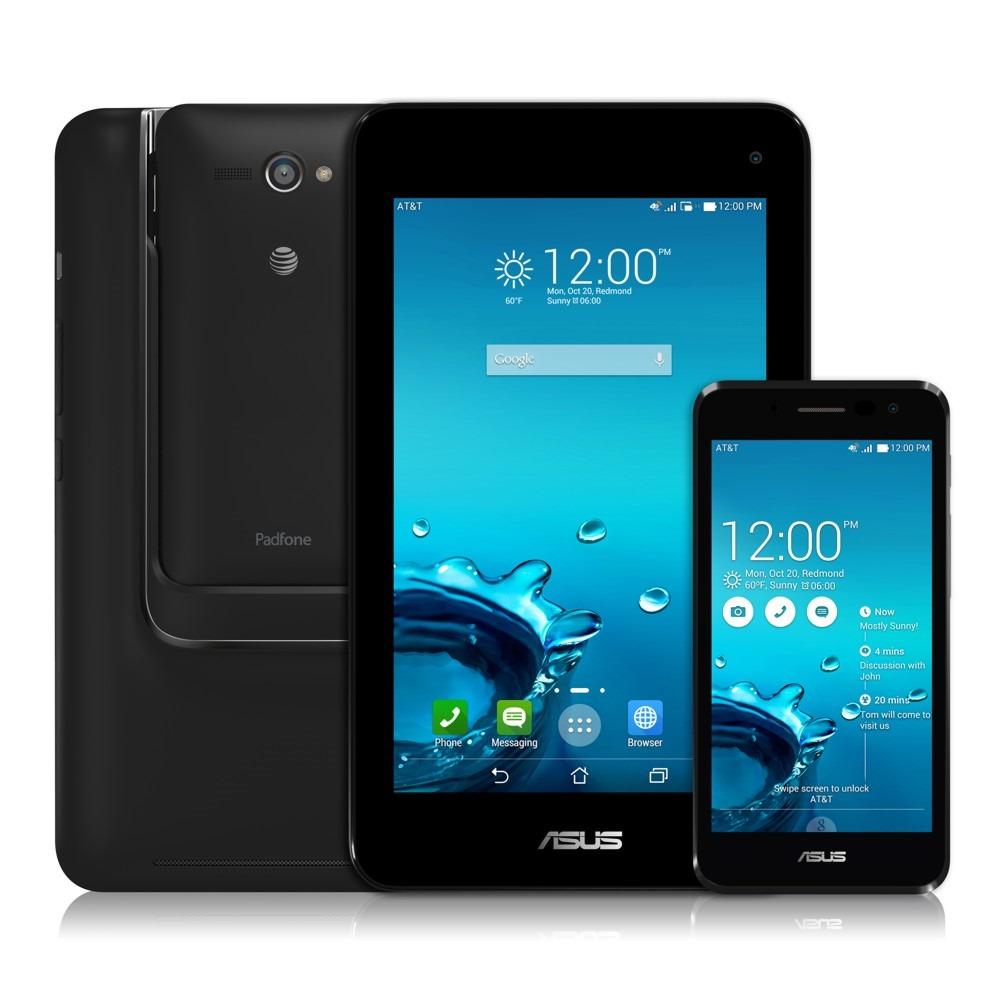 All of the processing, storage, wireless and memory is in the 4.5″ phone. The tablet is basically a display, battery and speakers. To put it in tablet mode, you slide the phone into the 7″ tablet, wait 1-3 seconds for the display to initialize and properly size, and you are in tablet mode. The phone has a very snug fit, well-designed. Some Android apps immediately show up exactly where you left off in the app on the phone, others are restarted on the tablet.

I used tablet mode where I needed a larger display and wasn’t on the go or when I was sitting on the couch or in bed, doing things like reading the news, reading emails, and watching videos. In tablet mode it is a heavier tablet experience than one would have with just a tablet, but the way the phone fits into the back of the tablet actually makes it easy to hold. My index finger touched the phone while my other three fingers fit on the bottom of the tablet. Some smart designer did think thoughtfully through this.

One interesting consequence of this kind of modularity is simplicity. You only have one set of apps and data, so your phone and tablet will always be in sync. One thing I hope Asus will improve on is to make the desktops sync. I want the same folders and icons on the phone and tablet, at least the home screen. If it doesn’t fit, it should just mode it to the next desktop. I’m pretty sure this would increase the phone-to-tablet time, but I can’t be certain. It is also simple in that you only have one data plan between your phone and tablet. Juggling between these two plans are a pain.

Lots of Intel Inside

The Asus PadFone X mini is basically an all-Intel phone with an SoC including a dual core Atom Z2560 1.6GHz processor with Hyper-Threading for a total of four threads. It also has a 400 Mhz. graphics subsystem. The modem is an Intel 7160 XMM Slim Modem, operating on the CAT3 AT&T LTE network. The PadFone X mini comes with two batteries, the phone has a 2,060 mAh battery and the tablet portion has an additional 2,200 mAh battery, for a total of 4,260 mAh. That’s a lot of battery. AT&T, Asus and Intel claim that, “Automatic charging with up to 28.3 hours of battery life when the phone is docked into the station, and up to 15.8 hours of battery life on a single charge when used in the smartphone mode.” This is for talking and standby time, so I’m not too sure how many measured hours one would get surfing the web as I didn’t do detailed battery life benchmarks.

So you might be thinking, “Pat, what in the heck are you thinking, I thought you were all about premium phones”. Well, I am, but there are other kinds of markets and people who don’t want to shell out what ends up being an $1,100 phone like mine. So here are some of your alternatives:

As hopefully you see, the mini phone alone would be a good deal on its own just on the merits of processor, memory, display, storage, and connectivity, so adding the tablet portion to the equation is gravy. A lot of gravy. So what’s the catch here? It’s simple. Intel wants this phone to fly off the shelf in huge volumes and is willing to subsidize it. While Intel hasn’t said this, I’m assuming that Intel had the SoC and modem already manufactured and they had the option to inventory, grind or go build something that would drive volume. I think they chose the latter.

While I personally prefer a premium phone like the iPhone 6 Plus, there are 10s of millions of Americans who either can’t afford one or just don’t want one, and for them, they should take a close look at the Asus PadFone X mini.