This week Computex is being held in Taipei, Taiwan. Intel took the opportunity of Asia’s biggest IT tradeshow to make several important announcements in advance of the company’s 50th birthday next month. The announcements largely reinforced the company’s commitment to legacy PCs, but also underscored many of the infrastructure elements of its new smart home strategy (which I wrote extensively about in a white paper back in April).

Perhaps the most important smart home related news to come out of Computex today was the announcement that Intel is now formally sampling 802.11ax chipsets based on the Draft 2.0 specification for mainstream 2×2 and 4×4 home routers and gateways. As I wrote back in April, the critical issue with today’s smart home is essentially a “plumbing” problem: IoT devices in the home demand 24×7 reliable access to the Internet, yet the infrastructure “pipes” that provide the Internet to consumers’ homes are inconsistent from a high-speed bandwidth standpoint, geographically uneven across the United States, and mostly offer asymmetrical speeds.

Intel has taken a holistic approach to maximizing W-Fi performance in the home, based on the idea that device manufacturers should exploit the full feature set available with Intel’s 802.11ax chipset solutions in order to provide the best connected experience. The below slide provides an excellent overview of the key performance metrics Intel is committed to. 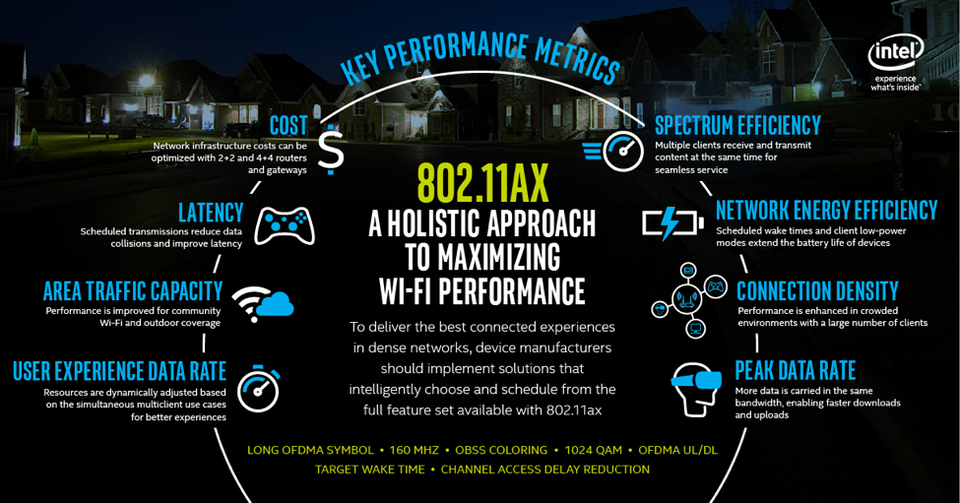 Also announced at Computex were Intel’s new Ethernet “boost” enhancements for home gateways. Intel is sampling low-power, cost-effective 2.5GbE PHYs that it says will allow home gateways and PCs excellent inoperability for the new IEEE 802.3bz standard. Since many consumers still have their external broadband “pipe” directly connected to a gateway that services the entire home, these enhancements are critical to optimizing broadband performance at the Ethernet level before it is distributed wirelessly throughout the home.

Doubling down on voice-enabled devices

Lastly, Intel debuted a set of hardware offerings at Computex that promise to make it faster and easier to build voice-enabled devices. As I’ve written extensively before, Intel is very much aware of the popularity of smart assistant products; accordingly, it is making big bets that machine learning (ML) and artificial intelligence (AI) will become essential elements in tomorrow’s smart home. These new hardware offerings seek to capitalize on this view, allowing OEMs to build all sorts of voice-enabled devices—from basic smart speakers, to very high-end multimodal home devices. To aid OEMs, Intel’s new Speech Enabling Developer Kit (based on Intel’s Dual DSP with Inference Engine) allows developers to work with the qualified Amazon Alexa Vice Service audio front-end. The kit includes a commercial-grade Intel Atom SoC, ideal for developers who want to generate additional design features such as displays and cameras, which require heightened performance. Frankly, Intel has always been very good at delivering great developer kits; I expect we’ll see a whole host of new and innovative voice-enabled devices from OEMs for the holiday season.

Intel continues to execute on its connected home strategy, focusing on the home network infrastructure. This is not to say that Intel is moving its eye off the products that built the company’s reputation. Intel’s recently announced Whiskey Lake U-series and Amber Lake-series—mobile line-up additions to the 8th Gen Intel Core processor family—are positive proof that Intel is not waving a white flag in the processor wars. Intel understands that it must win at the home network infrastructure level, not just inside of the PC, to remain relevant and compelling.