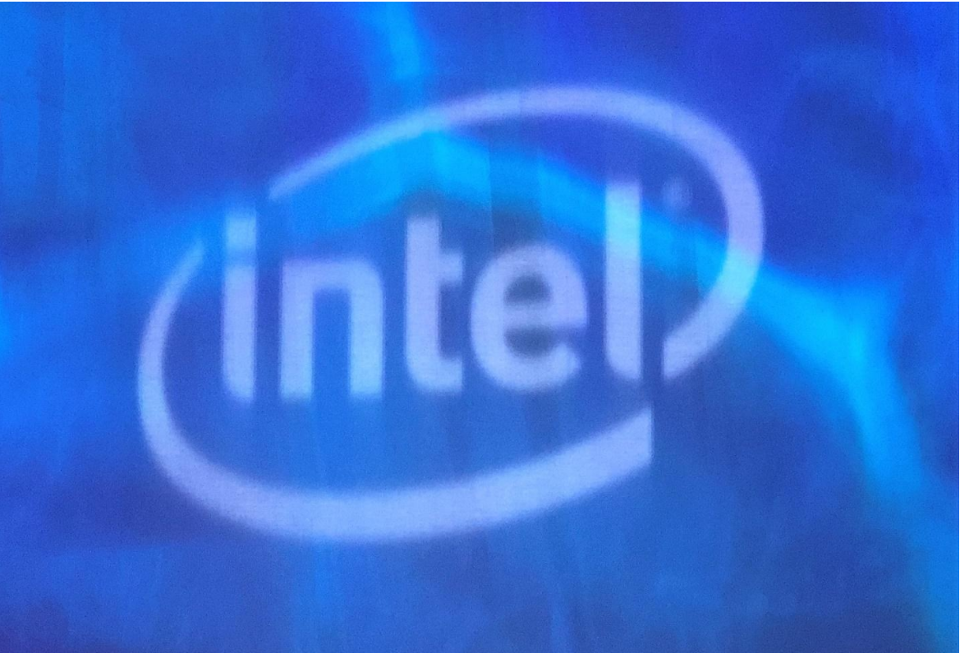 This past week, I and several other members of the Moor Insights & Strategy team camped out at CES 2018 in Las Vegas to learn as much as we can about the latest in consumer electronics technology, trends and company strategies. The conference is not only a great opportunity for startups to flaunt their stuff, but for industry stalwarts to show us where they are in the pecking order. There aren’t a lot of companies more stalwart than Intel, and I was excited to attend Intel CEO Bryan Krzanich’s keynote address on Monday evening to see what the company has in store for the new year. Here’s my rundown of the keynote and all the important stories coming out of it and wrap my opinions around it.

It’s important to understand that CES opening keynotes are typically 75% glitz and 25% content.  This is particularly true when it comes to the coveted, opening spot that Krzanich had. This keynote was the most visually rich performance I’ve ever seen at a tech show—colorful, complex and stunning. Intel has really raised the bar, in my opinion. This isn’t the spot where you would roll out an update to a 10nm roadmap as I am sure some would have wanted.

Krzanich kicked the evening off by taking a moment to address the industry’s Spectre and Meltdown troubles—assuring the audience that Intel’s number one priority is to make sure its customer’s data is secure and lauding the way the industry has come together to address the loopholes. I found this surprising, but appropriate. The fact is, the press has made many mistakes on the coverage, so in a way, BK “had” to open with it. The other fact is that the industry has come together in an unprecedented way to combat the holes. Usually, we are talking about the damage that was done due to a lapse in cybersecurity, very different from the conversation we are having on this issue. There is a hole but no vehicle, no breach, and no damage done yet, well ahead of the game. 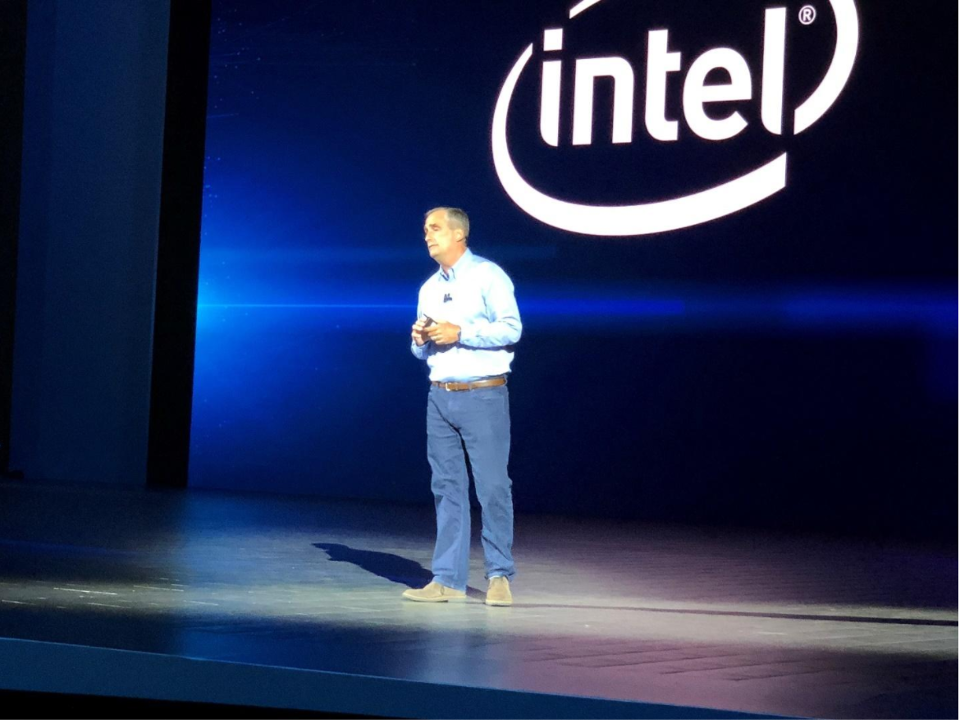 Krzanich quickly moved on from security to give some big picture soundbites about the big data revolution, noting that while data was once a static commodity meant to be stored, analyzed, and distributed very carefully, it has become something much more dynamic in the last several years.  As an industry insider, I found it repetitive, but most in the audience aren’t insiders so it was probably necessary. 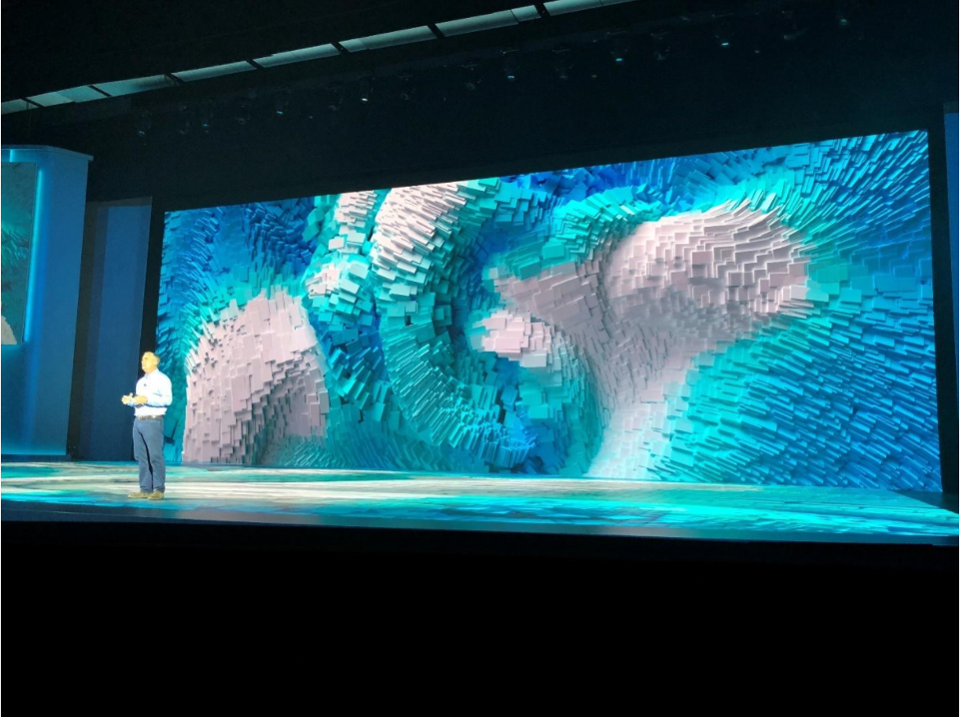 Next, Krzanich spent some time on the work Intel is doing with “immersive media”—calling it one of most exciting, non-traditional uses of data. As an example, Krzanich cited Intel True VR technology, and its implementation in sports arenas—allowing fans to get the “best seats in the house” from wherever in the stadium they are sitting. On that note, one big announcement from Intel at CES this year was that the company would be powering the largest-scale VR event ever, during the 2018 Olympic Winter Games in PyeongChang, South Korea. Intel says this effort will enable fans from across the world to get a closer view of the action. This is a really neat, high-profile use case for the technology, and I applaud Intel for making it happen. I’ll admit when Intel first introduced, I wasn’t thrilled, but I can now see the possibilities to transform sports entertainment.

Another announcement from the keynote was that Intel would be entering into a 3-year partnership with Ferrari to use AI to enhance spectator experience at the Ferrari Challenge, a championship race series. Intel says that its AI technology will work in conjunction with drone-captured aerial footage to enable broadcasters to provide in-depth analysis and race insights in real time.  I have a lot of experience with Ferrari, am a bit skeptical on the outcome, but given Ferrari is very technically astute, I’m open.

Next, Krzanich brought former Dallas Cowboys quarterback Tony Romo on stage to talk more about the usage of Intel True View within NFL broadcasts. Romo gushed about the technology and the new, firsthand perspective it gives viewers with its “be the player” feature—allowing viewers to see exactly what any given player is seeing at any moment in time. The “be the player” feature personally is one of the most compelling things I saw at the show. 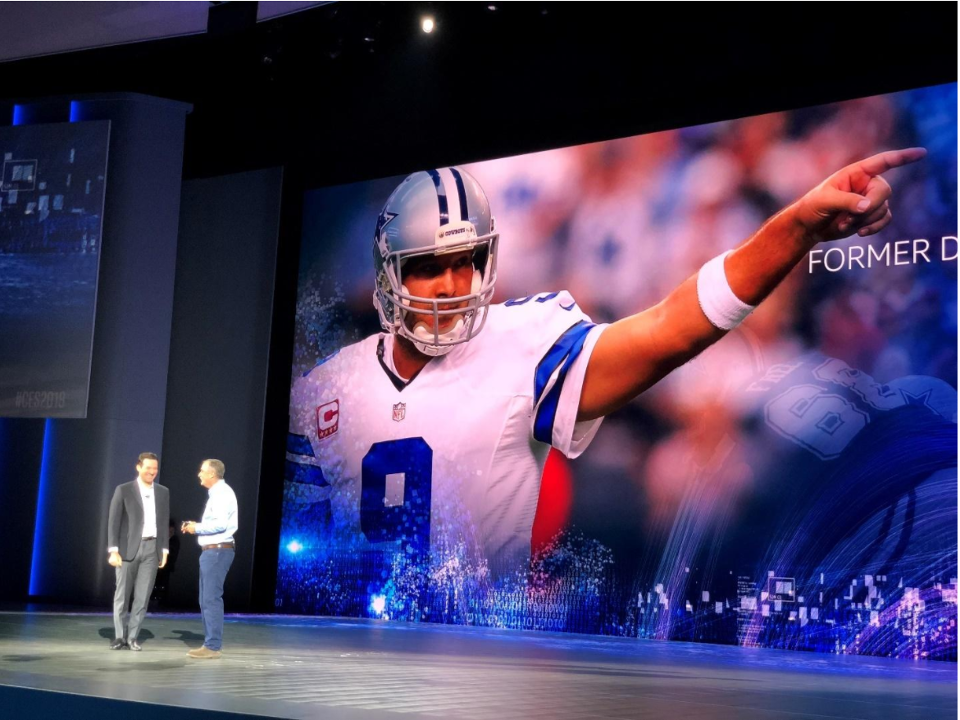 Krzanich – introducing Tony Roma and “be the player” capabilities

Moving on from sports, Krzanich then spent some time talking about the just-announced Intel Studios—a brand new, state-of-the-art studio in Los Angeles built for the express purpose of producing the next generation of immersive media. Intel says the studio is a one-stop-shop for volumetric content production, with in-house pre/post-production, visual effects, set design, and much more. Imagine experiencing a movie with the same True View technology used in Romo’s NFL example, in which you can watch from any angle, from any character’s perspective, on the fly. In my opinion, this is impressive and mind-bending—it’s like a Light Stage for movies. I think this could turn out to be a big industry disruptor.

On the future of neuromorphic and quantum compute

Krzanich then pivoted to the topic of neuromorphic computing—computers that can mimic the way the brain “observes, learns, and understands.” This is different from an ML training chip that is basically a math-matrix machine- neuromorphic thinks. Intel announced at CES that its neuromorphic research prototype chip (named “Loihi”) is now fully functional, and after only a few weeks is doing basic object recognition in the labs. Intel says that Loihi will be shared with Intel’s research partners this coming year. This is interesting, to the say the least—I look forward to hearing more about it. It is important for Intel to roll out futuristic designs as the company can’t afford to look behind as they do in GPU ML training that has taken the industry by storm. 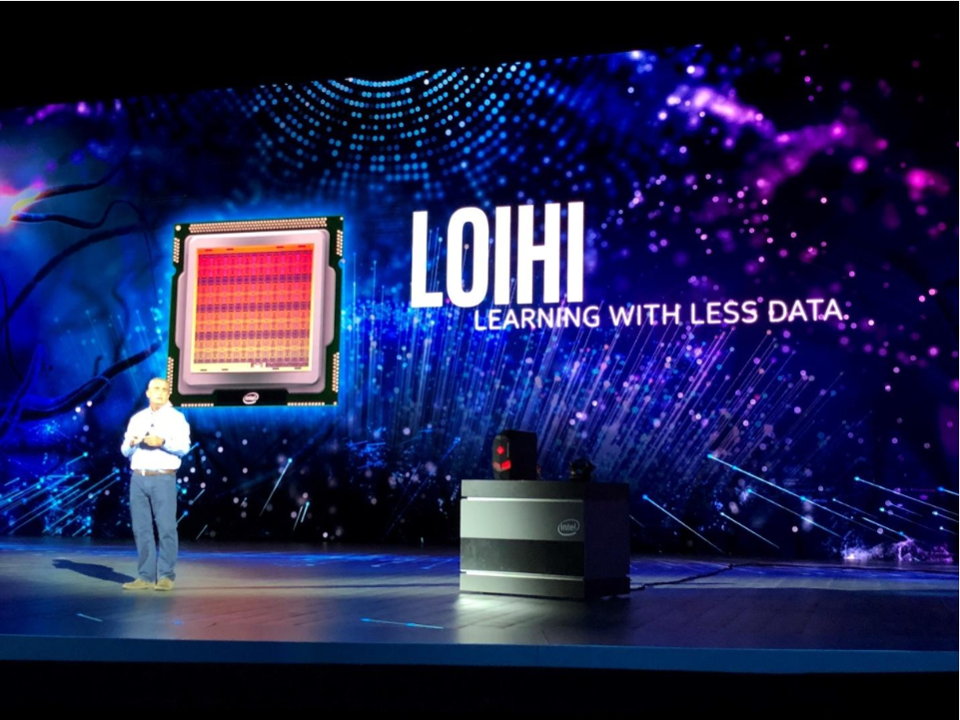 We also heard from Krzanich what Intel has been up to in the different realm of quantum computing, announcing Intel’s new 49-qubit quantum computing test chip, code-named “Tangle Lake.” Krzanich heralded the new chip as a major breakthrough while admitting that there was still long ways to go to unlock the full potential of quantum computing. Whether it’s IBM’s 50 qubit computer or Intel’s 49 qubits,  the industry is making more progress than I expected. 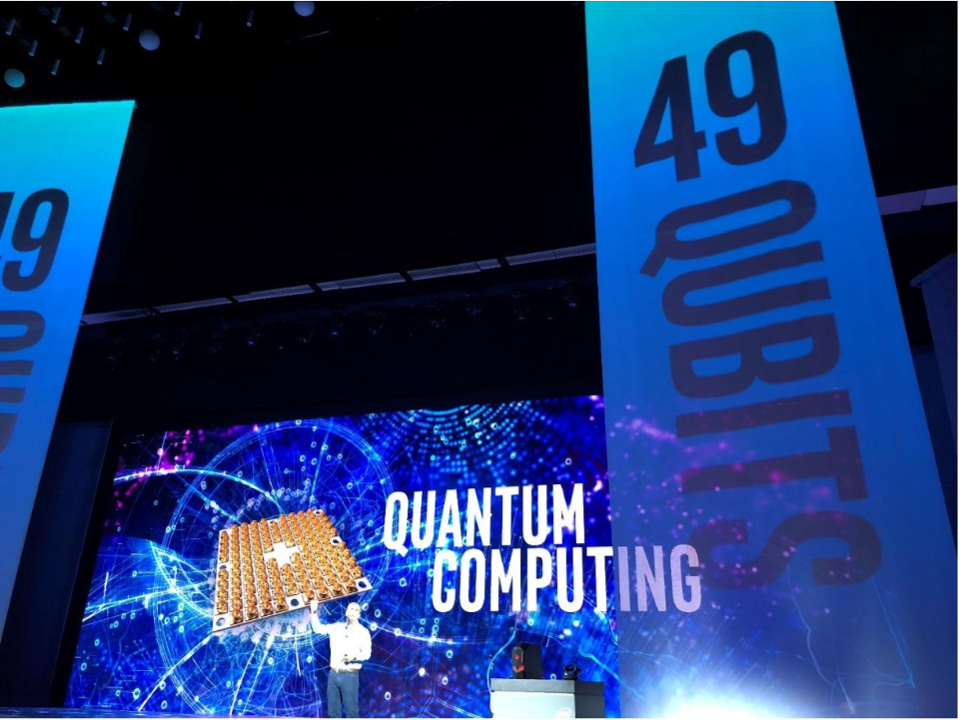 The next segment found Krzanich talking about Intel’s commitments to the betterment of society. He harkened back to the company’s previous commitment that all of the materials going into its microprocessors would be “conflict-free,” and proudly announced that all products made by Intel are now made (and labeled) conflict-free. He also provided an update on Intel’s 2015, 5-year commitment to invest $300 million towards increasing workplace diversity within the company, saying that Intel would actually be reaching “full-representation” of women and minorities by the end of 2018—two years ahead of schedule. Every company is doing these “business for good” announcements at a time where tech has multiple black eyes amongst many watchers.

Progress report on autonomous vehicles
In the last five years, CES has transformed from into one of the largest auto technology shows out there. Intel five years ago had a few infotainment auto wins here and there, but then went on an auto spending spree, snatching up Mobileye and Altera and signing a very strategic auto deal with BMW. 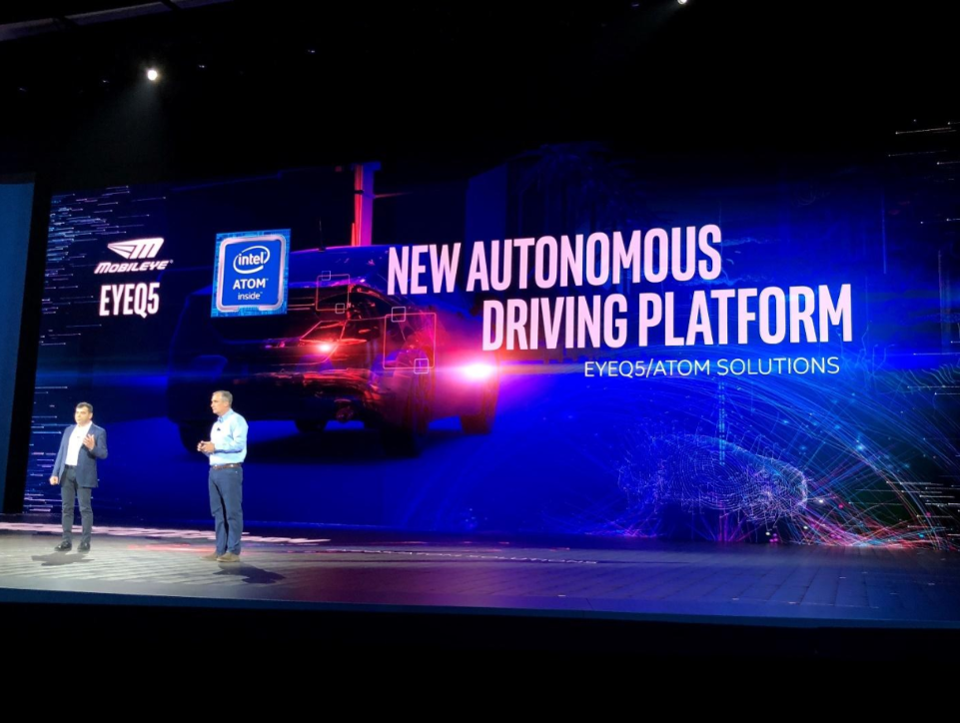 The last big segment of the keynote was dedicated to Intel’s vision of autonomous vehicles. Krzanich brought Intel Senior VP and CEO/STO of Mobileye, Professor Amnon Shashua, on stage to discuss how Mobileye’s technology is seeking to revolutionize the car industry and make driving exponentially safer, using cameras, sensors, and AI. Two new partnerships in the China market were announced, including automotive manufacturer SAIC Motor, and a digital mapping company named NavInfo. In addition, Krzanich shared details about Intel’s new automated driving platform, which pairs the newest generation of Mobile Eye’s chips, EyeQ5, with automotive grade Intel Atom processors. I wrote last year on how Intel had become a serious player to be reckoned with in the autonomous driving industry. It’s clear that the acquisition of Mobileye is bearing real fruit, and I think Intel has only further solidified its place in this sector.

All in all, I applaud Krzanich for delivering an informative and visually impressive keynote at CES 2018 and am not disappointed he didn’t give an update on 10nm as others have suggested. Big data, machine learning and automotive is the name of the game right now, and it was great to catch a glimpse of all the neat things Intel is doing with it in regards to immersive media, high-performance computing and autonomous driving. Despite the recent Spectre and Meltdown debacle, it’s clear that Intel has its eyes fixed on the future and is continuing to plow ahead. Intel, although not communicated on stage, is doing a lot in the Smarthome and you can check out our coverage the company doubling down on smart home here and strides in home networking here.

Disclosure: My firm, Moor Insights & Strategy, like all research and analyst firms, provides or has provided paid research, analysis, advising, and/or consulting to many high-tech companies in the industry, including Intel Corp.