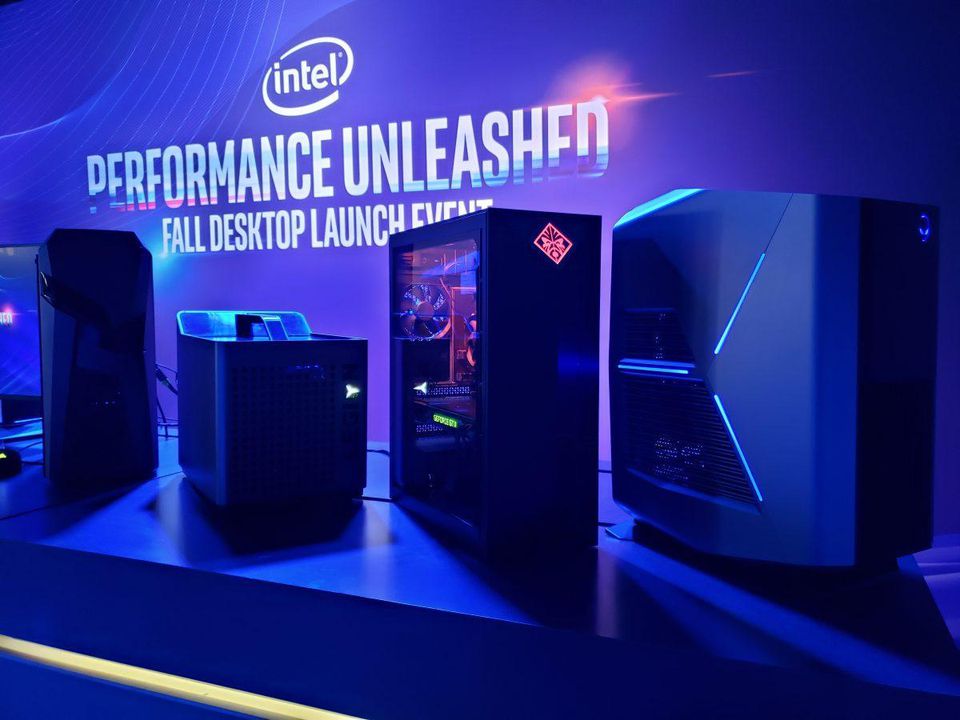 Last week at an event in New York City, Intel  announced its new desktop offerings for the fall—the 9 Series of CPUs and a new Xeon 28-core chip. Many of these chips, such as the 28-Core Xeon, have been anticipated for quite some time, and are seen as Intel’s answer to AMD ’s launches from earlier this year. Intel still maintains its performance leadership position in nearly every market and metric, though AMD is becoming more competitive in the CPU segment. To combat this challenge, Intel is starting to become more aggressive on its performance and pricing. Let’s dive in to the nuts and bolts of Intel’s new chips.

The New York event was mostly focused on the new 9 Series of desktop processors, which are primarily targeted towards enthusiast gamers and creators. These processors span the i5 to i9 gamut, with two different sockets—the mainstream desktop platform and the high-end desktop (HEDT) platform. The new 9th Gen Core series processors for mainstream desktop span from Core i5 to Core i9. The Core i9-9900K is the fastest ‘mainstream’ part, while the Core i9-9980XE is the HEDT part that has 18 Cores. The Core i5-9600K, i7-9700K and i9-9900K are 6, processors priced at roughly $300, $400 and $500 respectively.  These three offerings are designed to update Intel’s mainstream desktop lineup with more cores and higher clock speeds.

Intel also upgraded all of its high-end desktop processors (HEDT) from the 7th Gen to the new 9th Gen. The HEDT chips (also known as the Core X-Series) didn’t quite see core counts go up, but they did see some small performance improvements with clock speeds and some cache improvements but do not see a change in core architecture. These chips span from the Core i7-9800X 8-core chip up to the Core i9-9980XE with 18 cores, and range from about $600 up to $2,000. The great thing with many of these chips is that if you want to upgrade from the previous generation 7-Series, the motherboards remain the same, minimizing upgrade costs. Last but certainly not least was the new Xeon W-1375X, Intel’s 28-core chip designed to cater to creative professionals that need lots of cores for crunching. Many see this chip as a response to AMD’s Ryzen Threadripper series, particularly the higher core count models like the 32-core 2990WX.

For the first time in a very long time (that I can remember), Intel mentioned an AMD CPU in its presentation, comparing the Xeon W-1375X’s performance against the Ryzen Threadripper 2990WX. To me, the fact that Intel felt compelled to develop a competitive product and directly compare it to Threadripper is a clear indicator of AMD’s impact on the market. While Intel has yet to say how much a Xeon W-1375X will cost, I suspect that it will be considerably more than the 2990WX (considering the fact that the i9-9980XE is already more expensive). However, in the $1,000+ CPU market, price sensitivity is rarely a factor anymore—many users in that market just want whatever is the fastest for their workloads.

Ultimately, I believe the Core i9-9900K will prove to be the most popular product announced at the fall desktop event. Not only is it the fastest desktop processor for gamers, but it will also work well for people who want a very high clock speed processor with eight cores. Having all eight cores running at 4.7 GHz is quite a feat, and should considerably boost processing speeds. This should help Intel hold its grip on this part of the market. I believe that many gamers will target this chip for their ‘ultimate gaming rig’ configurations. Obviously, we won’t quite know what the performance will be for the i9-9900X until we test one or see early reviews, but it’s expected that this chip will be about 10% faster in most applications than the i7-8700K (which was already faster than AMD’s Ryzen 7 2700X). Granted, this segment is more price sensitive—some users will be turned off by the $500 price, while others will see it as confirmation of it being the fastest processor for gaming. Intel even went as far to say that it is the best processor for gaming, period. I’ve got a feeling the company’s lawyers let that claim stand because they know Intel could back it up.

Nobody will deny that Intel has had a rough year. That being said, with these new processors it seems that the company is starting to slowly wake up and address some of the new competitive landscape. At the end of the day, a more competitive CPU market means faster and better CPUs for everyone. With AMD presenting some serious competition, it seems like the market has come alive again. The net effect is that we’re getting more cores and clock speeds than we’ve ever seen before, and at a faster pace. I believe that this will ultimately benefit gamers and creators, as it drives more software developers to build applications to make use of the newly available performance.