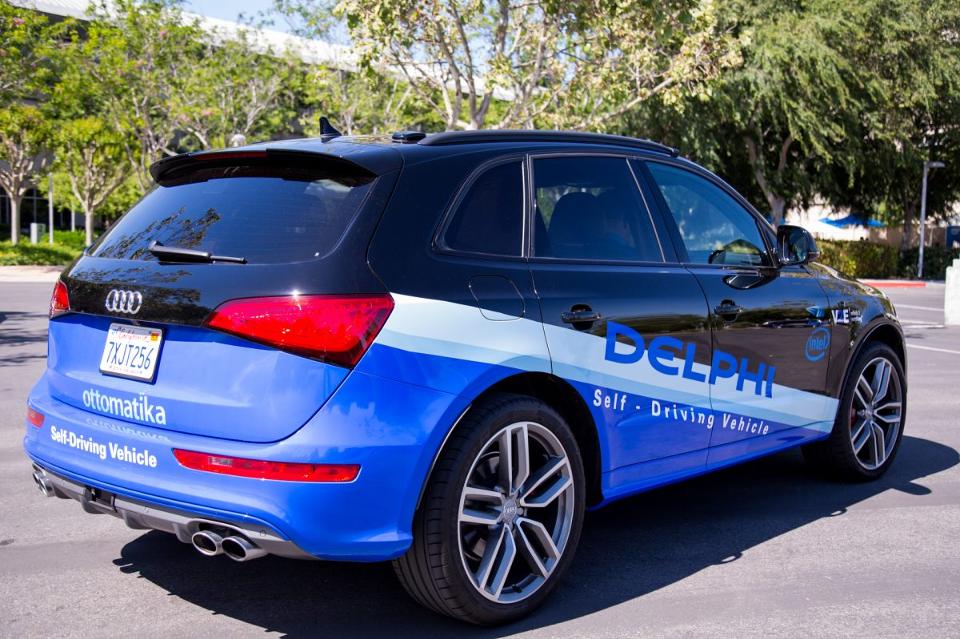 This Audi self-driving car I rode in looked surprisingly normal- with no computer in the trunk!

Earlier this month, I attended Intel’s first Autonomous Driving Workshop in San Jose, where press and analysts enjoyed demonstrations and talks from both Intel, and a handful of their partners—BMW, Delphi, Ericsson, and HERE. The tangible news, perhaps, was the unveiling of Intel’s new Silicon Valley Advanced Vehicle Lab. This is the fourth automotive lab of its kind in Intel’s roster (including ones on Arizona, Oregon, and Germany), and was built with the express purpose of exploring the multitude of requirements pertaining to the future of self-driving vehicles—AI, connectivity, sensing, in-vehicle computing, just to name a few. I had seen many of the singular demos Intel had at their lab, but this was the first time Intel had everything they were doing in automotive in one single place for a day of deep dives.

At Moor Insights & Strategy, we’ve been watching Intel’s flirtation with autonomous driving for years— last year our senior machine learning  analyst Karl Freund wrote on Intel’s partnership with BMW and Mobileye, which you can read about here. I didn’t consider Intel a player in future automotive until that announcement and honestly, I was very surprised. The announcement was a big win for Intel, and that, in conjunction with the news coming out of the Autonomous Driving Workshop, all seem to point towards a bigger picture that’s starting to come together: Intel is no longer just on the sidelines when it comes to autonomous driving, it has an end-to-end comprehensive strategy and it will be a serious player in autonomous technology.

It makes sense to start at the strategy layer. Intel’s automotive strategy is quite simple to understand, a challenge to execute, but the kind of strategy where Intel has historically had a lot of success. I’ve worked in and around Intel going on 30 years and Intel works best where compute is at the core, added value and quality above price matters, and the playing field can be raised above point solutions and singular chips. Conversely, Intel doesn’t do as well in places where it’s one person’s point widget versus another, price wars, or non-compute centered situations.

So, it should come to no one’s surprise that Intel’s strategy is compute-centric, solutions-based and an end-to-end one spanning the car to the datacenter. Intel has made a rapid transformation from an X86-driven compute-centric model to a very heterogeneous one. This, too, has been a surprise given how many years Intel adopted an “X86 or nothing” stance.  Intel acquired Altera ($16.7B) with FPGAs for LiDAR and machine learning inference, are in the process of acquiring Mobileye ($15.3B) with ASICs for vision, acquired Nervana Systems (estimated $400M) with machine learning ASICs for training, and acquired Movidius (estimated $350M) with image DSPs for vision.  Yes folks, that’s $36.35B. Ford Motor Company and Nissan are both worth around $40B and General Motors and Honda are both worth $50B. Let that sink in.

All these kinds of compute units plus Xeon and Atom can be used to effectively go after the end-to-end autonomous driving market and more importantly, are the right way to do it. People thought they would go all-X86 but they didn’t. 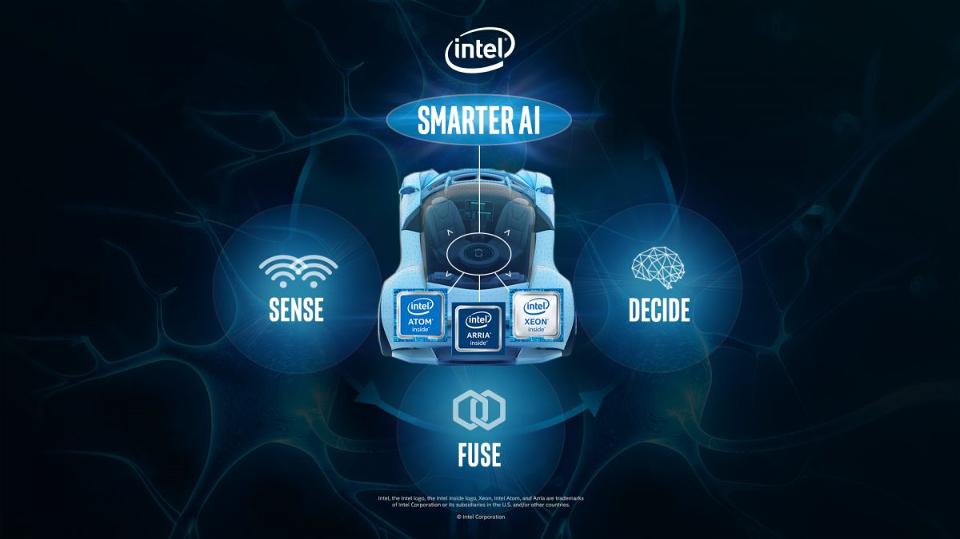 Intel’s strategy comprehends the datacenter, carrier, wireless transmission and the car itself. In Intel’s model, most of the machine learning training is done in the Intel datacenter with Intel compute, storage and networking then sent to the car wirelessly through an Intel-based back-haul to a carrier with an Intel-based software-defined network across to the RAN (radio area network) wirelessly connected to an Intel modem to an Intel ADAS which is running inference to drive, navigate and even serve up entertainment. Intel wireless technology is also talking to other cars and even municipal traffic systems. Please don’t take me literally when I say “all-Intel”. No one will be Intel-only and conversely, no one will be NVIDIA or Qualcomm-only. What I began to understand better was the 250 or so autonomous projects going on a very much multi-vendor. 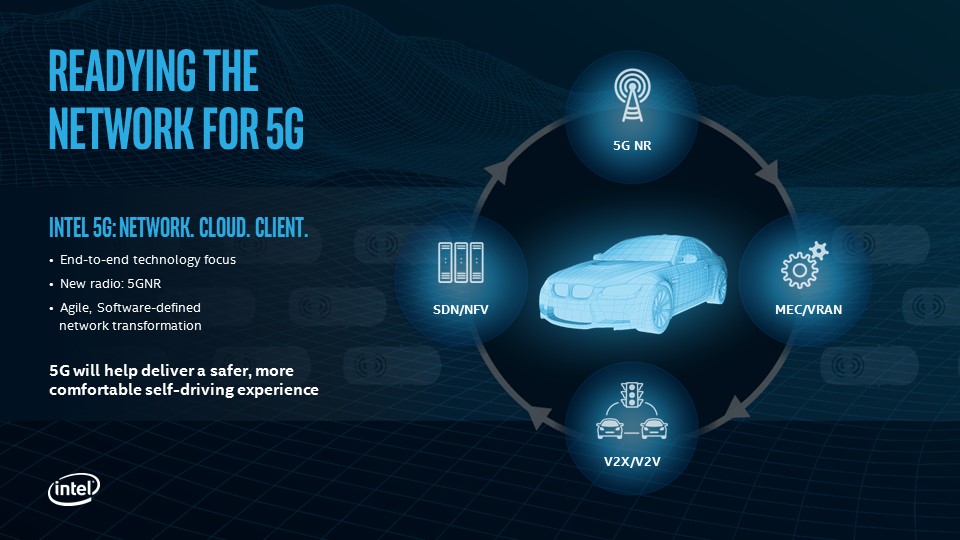 Now let me talk about what I saw at the Driving Workshop.

Dispatches from the workshop 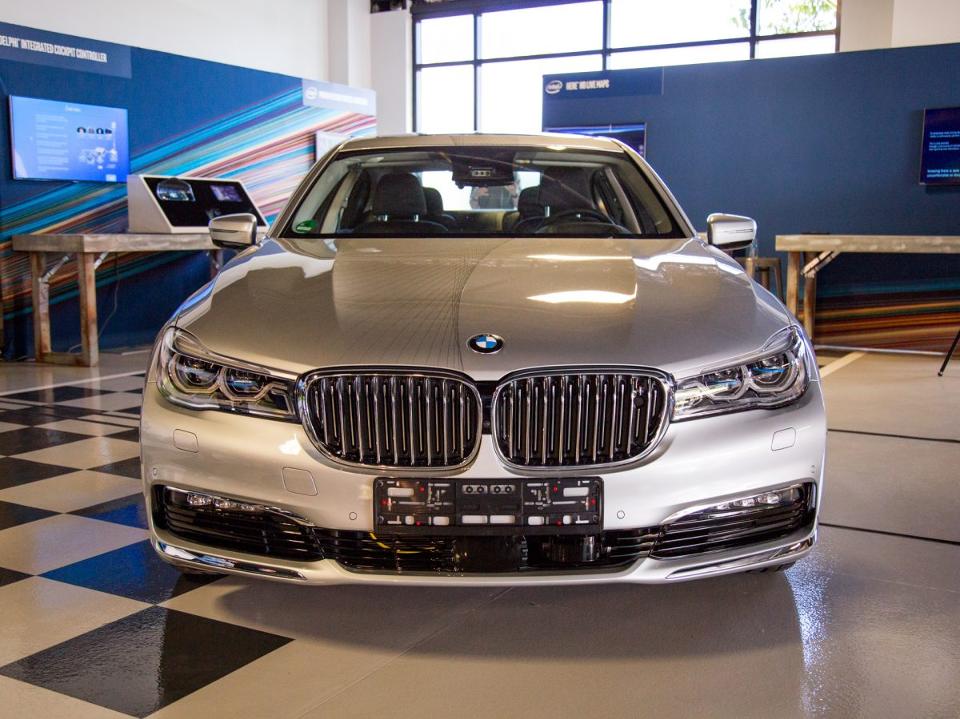 BMW had many self-driving cars on-hand, including a first look at the autonomous BWM 7 series.

It’s no surprise that big data is the name of the game when talking about the future of autonomous driving. It’s estimated that a fully functioning autonomous car will generate up to 4 terabytes of data every 90 minutes of operation, so it makes sense that the theme of the workshop was “the data-driven journey.” The data challenge is twofold—the industry is scrambling to figure out how exactly to process, filter, and analyze a lot of this data in-car, as well as trying to address the challenges of car-to-cloud data movement. At the workshop, Intel strongly emphasized the need for 5G wireless data pipes to process these massive amounts of data, and announced that it was close to launching their own 5G vehicle-to-vehicle, and vehicle-to-infrastructure communications. In addition, while they haven’t quite cracked it yet, they announced that they had been making progress on the “big data” problem of processing the wealth of cross-platform sensor data generated by autonomous cars. All of this, together with Intel’s recent announcement of the creation of its AI division, show that Intel is really trying to stake their claim not only as a player, but a visionary leader in autonomous driving.

The world also finally got a first glimpse of one of highly-automated BMW 7 Series vehicles—a result of the partnership with BMW and Mobileye I mentioned earlier. These state-of-the-art cars combine Intel’s compute power, Mobileye’s computer vision technology, and BMW’s advanced automated driving capabilities. This series is a prototype of the first highly automated vehicle for production, the BMW iNext, which they plan on launching in 2021. The BMW Series 7 features a scalable, car-to-cloud platform, and makes critical decisions based on a 360-degree model of its surroundings. 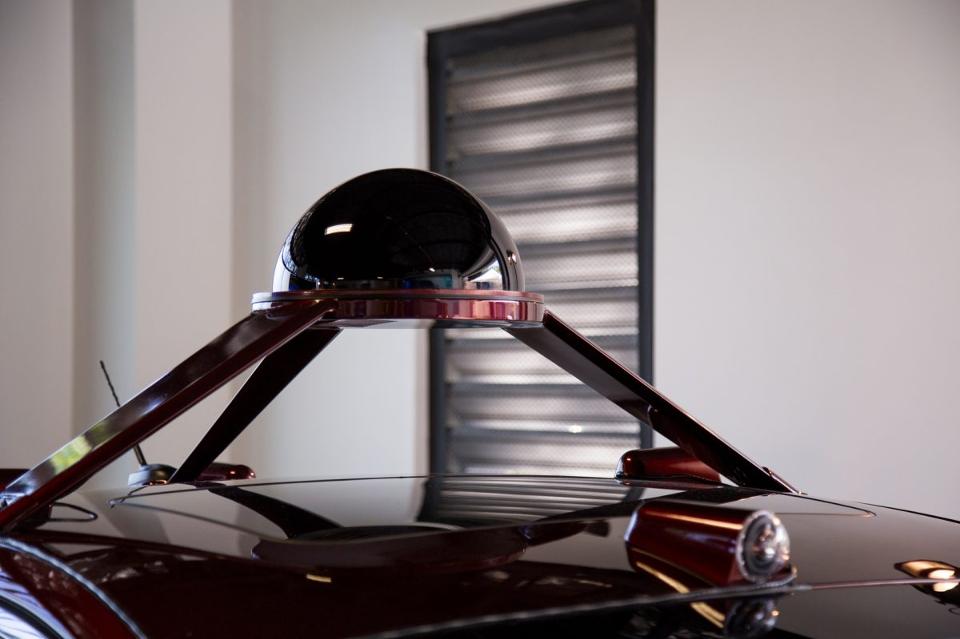 In addition, as part of its Silicon Valley Advanced Vehicle Lab, Intel unveiled its new Autonomous Driving Garage. The very location of the Lab and Garage is a great strategic move in my opinion—it’s located right in the heart of Silicon Valley, inside the Altera facilities, with easy access to Intel’s various partners. I could get an inside look at a lot of the projects Intel is working with its partners on, in the realms of HD mapping, human-machine interaction models better wireless connection standards, and more. I even got a ride in a self-driving vehicle—an Audi SUV that the automotive supplier Delphi said they fitted with Intel electronics and other technology. The incredible part was that the vehicle looked like a normal car without those bulbous sensors and AC-sized systems on top of the vehicle.