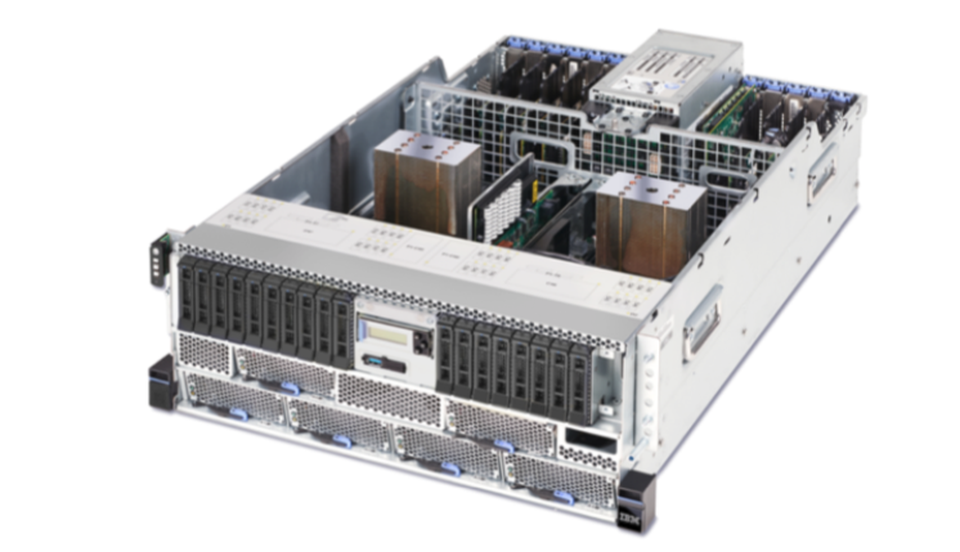 Back in December, IBM announced the first phase of its POWER9 products—its first POWER9 chip and its first POWER9-based server (read my full write-up of the announcement here). Now IBM has officially launched the second phase of its POWER9 server products. While the first phase centered around newer customers focusing on AI and ML workloads, the new phase targets current IBM customers running IBM AIX, IBM i, Linux, and SAP HANA. I am going to delve further into the new announcements, but first, some background.

IBM Power Systems play where reliability, longevity, and performance are key. I heard a great story from an “IBMer” last week about a customer being upset that they had to reboot their older POWER system after nine years. With an NPS of 65, it is clear that customers are very happy with these products (Google has an NPS of 50, for reference). This is a big part of why IBM is very well represented in the financial, healthcare, telco, and government markets. You can get a sense of how focused IBM is on verticals by looking at this.

Another key to IBM’s success is that its solutions are end-to-end. IBM, like Apple, creates all the hardware and software and even some of the applications. In addition to the POWER hardware, IBM also offers as part of all POWER systems IBM AIX OS, IBM iOS (no, not the one from Apple), Linux OS, PowerVM (virtualization), PowerVC and PowerVC for SDI (cloud stack), and IBM Private Cloud (containers). IBM Power Systems are essentially designed to be one-stop shops—very appealing for customers.

Building on the first phase, focused on AI and ML

IBM has adopted a sort of “rolling thunder” approach for its POWER9 product releases. As I said earlier, the first phase was geared towards newer customers, focusing on AI and ML workloads. The initial release of POWER9 received prominent endorsements from both Google and the Department of Energy CORAL; while Google has yet actually to publicly deploy POWER9, CORAL is already running it and claims to be seeing significant performance improvements. AI/ML is an area where POWER9 undoubtedly excels, and it made sense for IBM to lead off here. The company wanted to make sure it got its due credit for designing the new architecture from the ground up for AI/ML specific workloads. Having accomplished this, IBM is now entering the next chapter of rollout—focusing on its installed base.

The second phase of IBM’s POWER9 offerings is geared towards mission-critical data and workloads, targeting current customers already running AIX, IBM i, Linux, and SAP HANA. These new offerings are designed to run on legacy, on-prem Linux, AIX, and IBM apps, or to create new cloud and AI apps. According to IBM Market Intelligence, 61% of the Power Systems installed base claims that “cloud” is impacting their migration plans, and not just because their CIOs are breathing down their necks to “get some cloud.” That number even seems a bit low to me, but it makes sense.

Power Systems in private cloud, too

Speaking of cloud—every Power System comes with its virtualization software built-in, called PowerVM and a base cloud stack called PowerVC, a crafted OpenStack base software stack. These run on Linux, IBM AIX and IBM i. Customers can upgrade, for a fee, to PowerVC for SDI to get a complete SDI stack, adding SDS (software defined storage) and SDN (software defined networking) to the base PowerVC. If customers prefer containers, they can use IBM Cloud Private software. 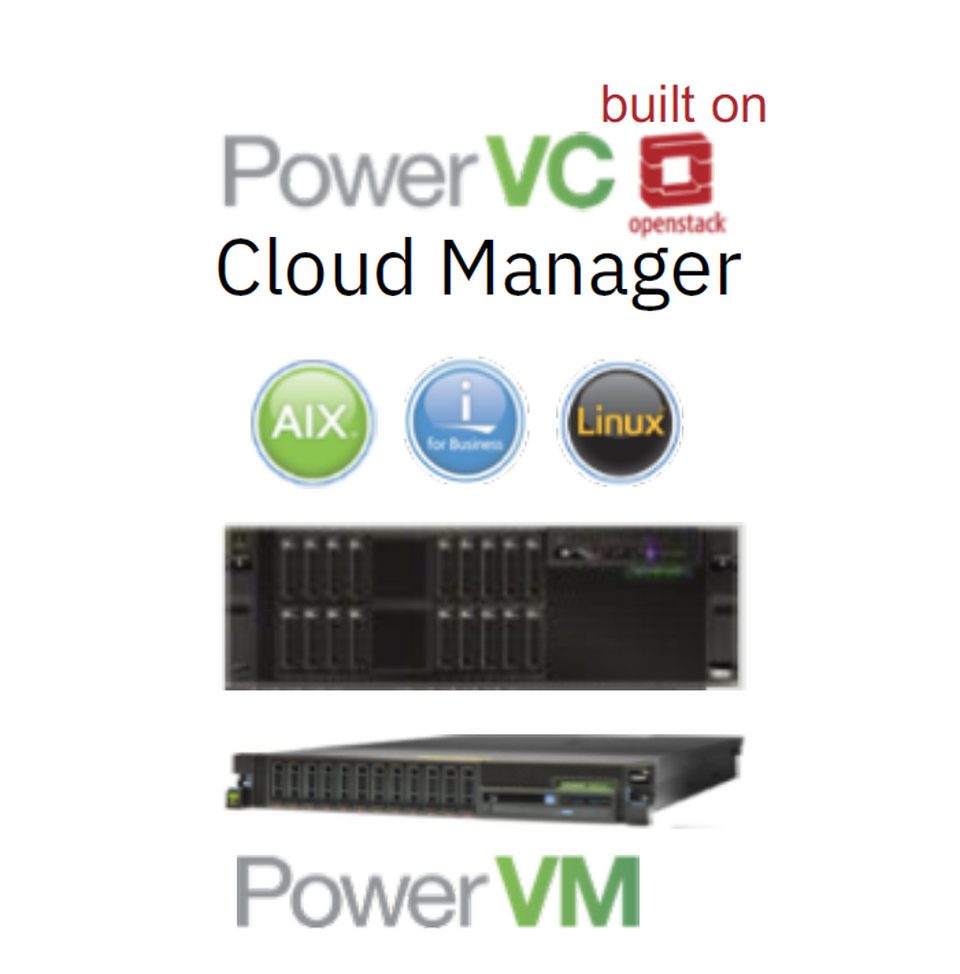 Every POWER9 system comes with virtualization and a cloud base of software.

This all sounds great on paper, but it is important to see these capabilities in action. While IBM could not disclose the company’s name, it has mentioned a major European retailer customer who is using Power Systems in three different environments. First, it has an AIX private cloud, running PowerVC and PowerVM on top of one POWER8, 128 core, 4TB E850C 4U system. Secondly, the company is using a big data, Mongo DB private cloud, running PowerVC Cloud for SDI and KVM cloud on six 22 core POWER8-based S822LC systems. Lastly, it is running an AI system for ML research, on one 20 core POWER8-based S822LC (the S822LC can handle two to four NVIDIA Tesla P100s with NVLInk and optional water cooling—I like to call it the “Swiss-army knife of acceleration”). These case studies are all good demonstrations of IBM Power Systems’ private cloud versatility—I hope to see more examples soon of companies putting the new POWER9-based servers to work.

The last thing I will say in this area is that IBM is putting much emphasis on the fact that it has a ten-year roadmap for both AIX and IBM i. The company wants to demonstrate that not only is it making a long-term customer commitment, but also that its OSs will remain “fresh” like Linux (even though the company is a big Linux player). It’s important to note that if IBM customers stick with AIX or IBM i, there is a 100% chance they will buy IBM hardware.

With all of the bigger picture stuff out of the way, let’s move on to the nitty-gritty of the new POWER9 platforms. These new products do feature some impressive differentiated technology—such as the built-in virtualization software mentioned earlier. Additionally, these new platforms sport 25Gb/sports, which can add some of the fastest AI, ML, encryption and network accelerators out there. As I have written before, IO is becoming everything when it comes to server platforms and subsequently server chips. These links support NVLink 2.0, OpenCAPI 3.0, and PCIe Gen 4. No other platform supports this kind of options. Additionally, POWER9 platforms feature 4TB with two sockets, with two standard RDIMMS, allowing customers to quickly put entire HANA instances on one server, addressing real memory, without crossing server links or spooling to slower storage. While most SAP HANA installs are below 2GB, I believe this is because this capability was not readily available, and IT restricted the amount of data to memory size.

The new POWER9-based platforms are divided into three families. First, small enterprise servers for AIX, IBM i, and Linux. This group includes the S922, the S914, and the S924, which span from a four core, 1-socket, 1TB platform in a 2U chassis, up to a 24 core, 2-socket, 4TB platform in a 4U chassis. All of these come with PowerVM and support for AIX, IBM i, and Linux. The biggest reason, in my mind, for legacy POWER customers to move to POWER9 systems are the huge improvements in performance, pre-built cloud capabilities, and the fact that the technology is robust and “future-proof” with its 25G links and PCIe Gen4. IBM is touting a 50% performance improvement over POWER8, so I can only imagine somewhere in the ballpark of a 500% improvement over POWER5. That is significant.

The second group of the new POWER9 servers is those optimized for SAP HANA—the H922 and the H924. These span from a four core, 1-socket, 4TB platform in a 2U chassis to a 24 core, 2-socket, 4TB platform in a 4U chassis. All of these come with PowerVM and support AIX and Linux. It is important to note that IBM i supports only 25% of the cores per system. The big reasons for legacy customers to upgrade here are the massive 4TB memory access on 2-socket systems, increased performance, and potentially better reliability. IBM says that failures of x86 servers are often cited as reasons for delays in HANA ’go-live’ projects. Furthermore, IBM says clients are migrating from HANA on x86 to POWER are reporting at least 2X better performance. I have not had the chance to vet any of these performance claims, but I intend to. Things could get interesting here!

The last segment is straight-up Linux, add your own “everything”, even though the platform still comes with PowerVM. This segment includes one platform, the L922, and spans from 12 core, 1-socket configuration in a 2U chassis to a 24 core, 2-socket configuration in the same 2U chassis. Some potential good reasons to upgrade from the older Power Systems could be increased performance and PowerVC’s pre-built cloud capabilities.

IBM Power Systems play big in the mission-critical markets where reliability, performance, and longevity matter—hence the 65 NPS score and strong presence in the financial, retail, and telco verticals. With the first phase of the rollout, IBM POWER9 proved itself as a great Linux platform for new customers with AI and ML workloads with dominating IO and great PowerAI tools. The second phase looks to be a promising attempt to appeal to Big Blue’s preexisting installed base, adding optimizations for AIX, IBM i, Linux, and HANA environments. Current AIX, IBM i and Linux customers should consider upgrading for the performance, longevity, and built-in cloud features. SAP HANA customers should keep in mind IBM’s spicy performance and resiliency claims versus x86 and consider upgrading to access the monster 4TB footprint. Legacy POWER customers on Linux need to consider moving to POWER9 platforms for the increased performance and built-in cloud capabilities. All in all, I think IBM has done a great job of positioning the new POWER9 servers towards its installed base of customers running traditional AIX and IBM i environments. I will continue to watch with interest.