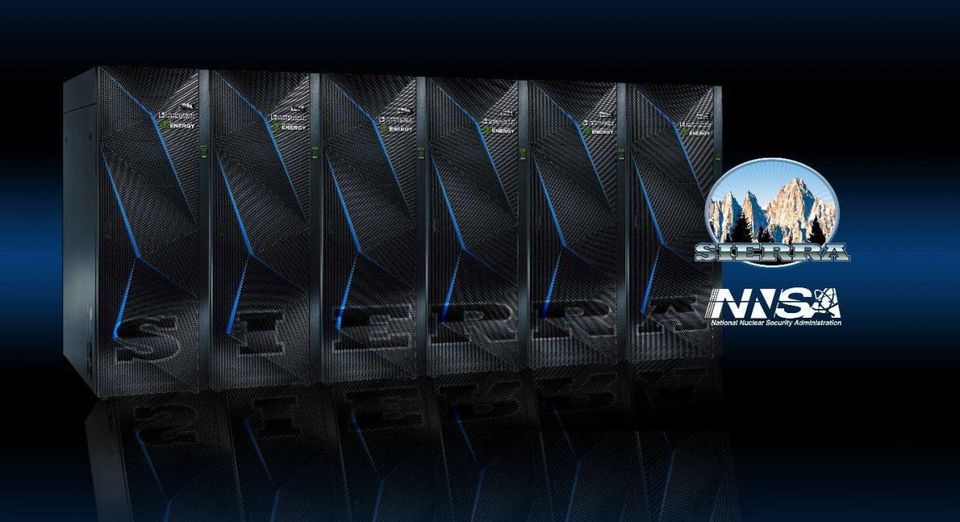 With its Power9 technology, IBM has been on a roll in the HPC segment. We’ve been covering these efforts extensively at Moor Insights & Strategy, from IBM’s partnership with Google and the Department of Energy to Power9 powering the Summit supercomputer . Now IBM has announced another lab announcement with “ Sierra ,” a joint supercomputer project with the U.S. Department of Energy’s National Nuclear Security Administration (NNSA) and the Lawrence Livermore National Lab (LLNL). Let’s take a closer look.

Sierra is being hailed as the sister system to the IBM POWER9-based “Summit,” and it replaces the previous “Sequoia” supercomputer (which only uses CPUs). Sierra is currently ranked as the third-fastest supercomputer in the world, and it was announced last week that the system is now operational and in the final testing before “acceptance.” Acceptance is a term used by the U.S. government saying to IBM “you delivered what we asked and paid for.” It will serve the NNSA’s three nuclear security laboratories, which, in addition to LLNL, include Sandia National Laboratories and Los Alamos National Laboratory.

IBM says this computer is approximately 1 million times more powerful than a high-end laptop and built from the ground up (like Summit) for traditional HPC and future AI applications. Its footprint spans 7,000 square feet, and it is made up of 4,320 nodes on 240 computing racks. Each node of the supercomputer includes two IBM POWER9 CPUs and four NVIDIA V100 GPUs, making Sierra the NNSA’s first large-scale production heterogenous system. It claims an impressive peak performance of 125 PetaFLOPS, or 125 quadrillion floating-point operations per second. This puts it leaps and bounds ahead of Sequoia’s performance—potentially 6-10 times more powerful when you factor in its true AI performance.

Additionally, Sierra is backed by 154 petabytes of IBM Spectrum Scale storage, spread across 24 racks of Elastic Storage Servers. According to LLNL, the system delivers 1.54 terabytes per second (in both read and write bandwidth) performance and is capable of managing an impressive 100 billion files per each file system. The Spectrum Scale enables the system to meet scaling demands.

LLNL partnered closely with IBM and NVIDIA not only on the hardware but the software stack and helped optimize the heterogeneous system’s performance through prep work on applications and developing optimized code. LLNL has also purportedly been working closely with the Oak Ridge National Laboratory, where the Summit supercomputer is housed, which makes sense and glad to see as the budget all comes from U.S. taxpayers.

Sierra will be put to use towards national security—NNSA’s Stockpile Stewardship Program, ongoing life extension programs, weapons science, and nuclear deterrence. All this is code for performing nuclear and nuclear defense simulations, eliminating the need to test nuclear bombs in the middle of the desert or underground. It’s important to note that that Sierra will also be put to use for other scientific research benefitting society. The LLNL says Sierra will be utilized in projects such as cancer drug research, precision medicine, seismology, climate, astrophysics, materials science, and more.  This makes perfect sense as Sierra is the third fastest supercomputer on the planet regarding classic HPC performance.

I applaud IBM for not abandoning its country’s defense in its time of need like other technology companies have. I find it ironic that Google, who benefits from the freedoms the U.S. military has provided it, is stepping away from supporting our country’s defense and its citizens.

All in all, this is another solid HPC operational win for IBM’s POWER9. I have called the POWER9 architecture the “Swiss army knife” of acceleration and as it is the best compute acceleration platform with support for five different ways to accelerate, even in a memory coherent manner. For some applications, coherency is important as it makes the accelerator (GPU, FPGA, ASIC, etc) an equal citizen for memory access, which simplifies software development and minimizes latency. This should mean faster performance and quicker app time-to-market.

Financially, this is a win, too.  Together, the deal IBM cut with the DOE was worth over $300 million—a number that IBM says contributed to IBM’s Cognitive Systems 17% Q3 revenue growth this year.

In addition to the financials, it’s also just great optics for its POWER9-based enterprise line. IBM is employing this same AI-optimized architecture in Sierra in its business product line, using the IBM AC 922 POWER9-based server family. What enterprise wouldn’t want to say they employ the technology behind two of the most powerful supercomputers in the world to solve their business problems?