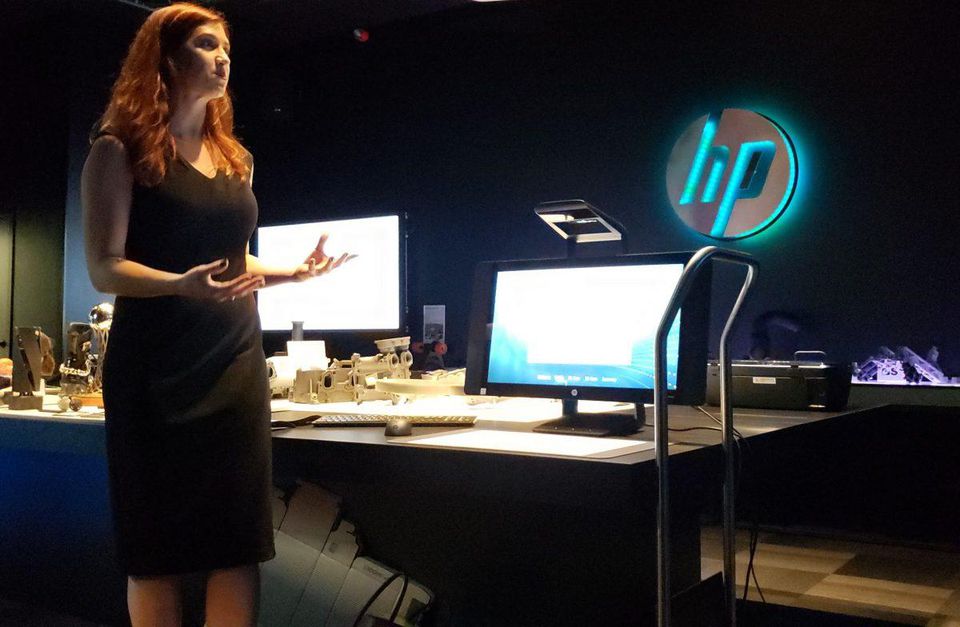 HP’s Sarah Clevinger shows off the breadth and capability of combining the HP FitStation with HP’s Sprout for helping scan people and help them find the perfect footwear.  ANSHEL SAG, MOOR INSIGHTS & STRATEGY

In fact, HP is the company that really opened my eyes to how broad the world of immersive computing can be and reinforced the idea of a spectrum. HP is a computing company first and foremost, that’s evident through their PC business and what used to be their server business, which is now known as a separate company HPe. However, their consumer PC business and printing businesses are still part of HP Inc. which is aggressively pursuing immersive computing through a multitude of angles.

One of HP’s first real forays into immersive computing was through the creation of their HP Sprout computer. This computer combines touch, 3D sensing and projection technology together to augment the user’s physical computing environment to make it more engaging and immersive. It also gives the user the ability to easily digitize objects into 3D models with relative ease, giving them the power to edit and modify those objects digitally. HP has created multiple versions of the Sprout PC and it has, in my opinion, effectively served as HP’s augmented reality device. I recently saw an interesting demonstration from HP at an event in Barcelona where an HP Sprout was effectively used in a banking scenario to help streamline the banking process. This process combined paper and digital documentation into one single easy to manage stream of digital documents and authorizations while also utilizing video chatting and more personal service and clearer communication.

Another thing that HP has been working on for a considerable amount of time and is no surprise to anyone is their 3D printing business. While many people overlook this portion of the business, I actually remember attending a SIGGRAPH conference years ago where virtual reality and 3D printing were the two primary trends of the show. I believe that HP understands that 3D printing and the immersive computing spectrum are inextricably connected and that without voxels in immersive computing there likely won’t be much creativity or demand in 3D printing. 3D printing’s growth is a good thing for HP because ultimately we are moving towards an increasingly digital world where paper printing is becoming less important. When I heard that HP had announced a line of 3D printers it sounded rational because it seemed like the next step of printing technology for a printer company as big as HP. However, HP’s 3D printing business is actually much bigger than just transitioning from planar to three dimensional printing. First and foremost, HP’s 3D printing technology works a lot like a regular printer would, utilizing a lot of the same technologies and uses a heat/light activated bonding agent to create layers of printed material based on the company’s unique powder that acts like ‘3d paper’. I never really considered printers as a part of immersive computing until I started to see things that didn’t exist outside of the digital world being brought into the physical world with 3D printing and the scans of real people being brought back to life with 3D printed models. As more and more people get scanned into immersive computing, the resources will be there to print people’s creations in virtual and augmented reality and make them physically real.

Another way that HP has a unique approach to immersive computing is through a continued use of their 3D camera technology that they originally developed with the Sprout. This is the HP FitStation, which sounds like a product that helps consumers find the right fit for their clothes, and you would be right except that it is specifically for feet. The FitStation helps to scan a customer’s feet and their gait to properly recommend a shoe or insole that will fit them best. What makes the FitStation interesting for immersive computing is that it starts to incorporate a digital version of your foot as the template for your shoe. At an event that I recently attended in Barcelona, HP announced a partnership with Brooks running to release a custom-built shoe based on FitStation data printed using HP’s technology to make a unique shoe for every customer. I believe that in the future technologies like the FitStation will become the norm as the personalization of everything for consumers increases to improve product quality and user experience. I could see such a technology being designed to make better and safer helmets for football players and motorcyclist, ensuring a more perfect fit.

The aforementioned applications of immersive computing are the most commonly overlooked things that HP is doing today to enable immersive computing. However, HP is also working quite aggressively in the immersive area of virtual reality to enable all kinds of solutions that meet consumer and commercial demands. The first thing that HP announced among their VR devices was the HP Omen X, which the company showed off at SIGGRAPH and was the first time I saw a VR ‘backpack’ PC that felt like it was high quality and built from the ground up for VR. HP got so much attention from the Omen X’s success that they quickly turned around and shipped the commercial Z VR Backpack workstation PC. Having a fully integrated PC inside of a backpack that’s designed specifically for room-scale VR translates to enabling unique VR experiences like the Jack Ryan VR experience which would be otherwise impossible. HP’s VR backpacks are also helping to enable this current phase of VR with location-based VR being the real short term growth and profit opportunity while many people have still not tried high quality or any VR. In addition to their backpacks, HP also offers the Windows Mixed Reality headset that is designed to help bring down the cost of entry to own a VR headset and make immersive computing more accessible.