The consumer PC market has been rough the last few years, but business notebooks, 2in1s and micro-desktops keep chugging along. It’s hard to do a spreadsheet or PowerPoint on your phone, no matter how big smartphone screens have gotten. Microsoft Windows 10, Skylake/Kaby Lake and the desire for better security and user demands for thinner and lighter are driving the next generation of corporate upgrades. HP Inc.’s new EliteBook Folio G1 breaks the mold of enterprise-class mobile computers and brings many things to the table that were simply unaddressed in the past by HP or others. 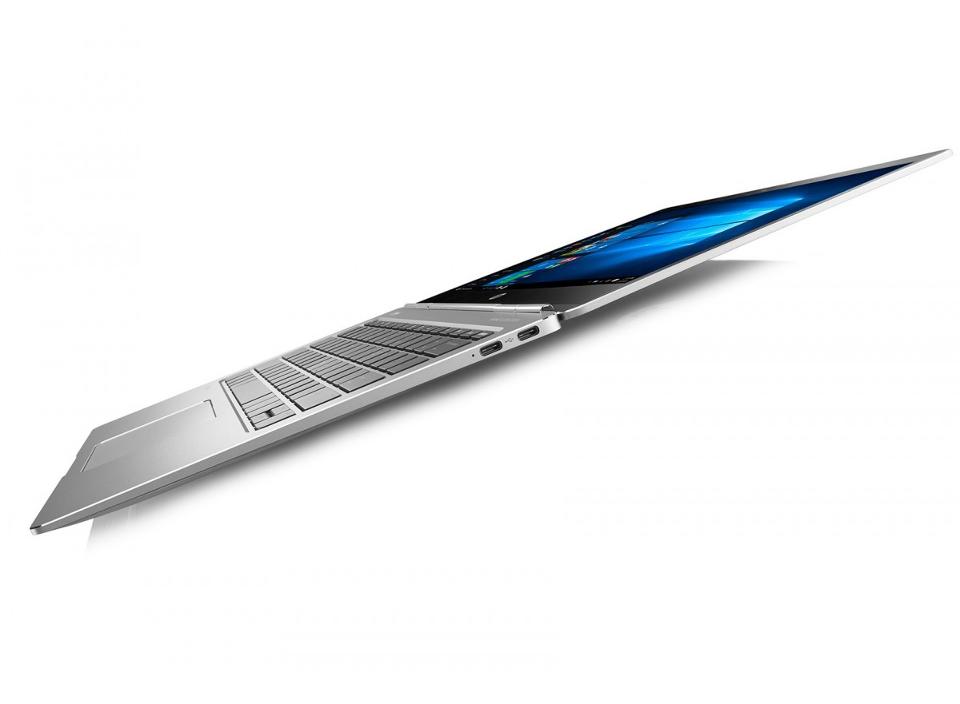 In the past, consumer and commercial PCs were extremely different from how they are today. Enterprise tanks with old innards versus sexy consumer PCs is the best way to describe it and this drove the desire for BYOD PCs that were unmanaged and insecure. The percentage of sexy consumer PCs continued to increase while the amount of attractive enterprise and business notebooks mostly stayed flat until the last 12 months. HP’s Elite family of products is designed around the principal of giving professionals what they want and need while ensuring that what HP delivers to them is dependable and does not falter. The EliteBook family is an extension of this concept in that HP builds their EliteBook notebooks to meet the needs of business professionals and at the same time delivering the latest technologies possible without incorporating unreliable or untested technologies.

The HP EliteBook Folio G1 was announced at CES and won a ton of awards, shipping in March and with reviews starting to pop up in May and were available for purchase around that time. I spent 60 days with the EliteBook Folio G1 as my primary business PC and want to share my experiences with you.

The EliteBook Folio G1 is manufactured from CNC aluminum with beveled and polished edges and lays completely flat with a 180-degree hinge. It weighs a paltry 2.2 lbs inside of a 12.5” screen size with dimensions of 11.5 x 8.23 x 0.47 inches. This is as thin/thinner and as light as a high-quality tablet with a keyboard cover or case.

HP worked with Bang and Olufsen to design the audio for the Folio G1 including the integrated dual-mic array and the four integrated speakers, a notable achievement in such a small chassis. For the keyboard, HP included a backlit keyboard which is accompanied by a Glass Synaptics ClickPad which means that taps and gestures are enabled by default. The 12.5” screen comes in both 1080P and 4K, which is a nice option but 4K is hard to recommend to business users due to the sizeable battery life hit. If you are working with 4K content or need the resolution, then this upgrade is a must, but otherwise I would shy away.

HP beefed up the enterprise-credibility on the HP EliteBook Folio G1 consistent with all EliteBooks with a multitude of hardware and software features that make this surprisingly thin and light notebook equally as surprisingly durable and secure. HP has included dual IR camera biometric authentication supporting Windows Hello, the biometric authentication system within Windows 10. Dual IR camera means a better image and should translate to improved accuracy.

HP also includes their Sure Start with Dynamic Protection which is designed to protect the system’s BIOS from incursions from hackers. Sure Start is independent of the host CPU and main memory dedicated to the user Operating System and periodically checks the integrity of the HP firmware and HP BIOS boot images stored in the non-volatile (flash) memory even while the OS is running. Dynamic Protection provides an early warning of an attack to the boot image. This is in addition to the standard support for TPM 1.2/2.0 standard and an Intel vPro option. The Folio G1 also runs Windows 10 Pro 64 which includes security features like virtualized security, Windows Hello, secure boot, Passport, Credential Guard and EDP. But the security is not limited to software and components only, because HP has also built the EliteBook Folio G1 to the MIL-STD 810G standard which means it is movement, dust, drop and environmental tested. All of this means that the EliteBook Folio G1 is robust inside and out.

First to get Thunderbolt 3 docking right

Thunderbolt 3 is one of the fastest and most flexible connectivity standards in the world. It uses a USB Type-C connector to connect compatible devices together and transfer data at speeds more than 40 Gbps, or about four times the USB 3.1 using the same Type-C connector. The whole ecosystem has been problematic in the past with nearly no compatibility and it seems to have taken some time to get sorted out. But with the Folio G1, HP has figured out how to make peripherals and docks work with Thunderbolt 3. 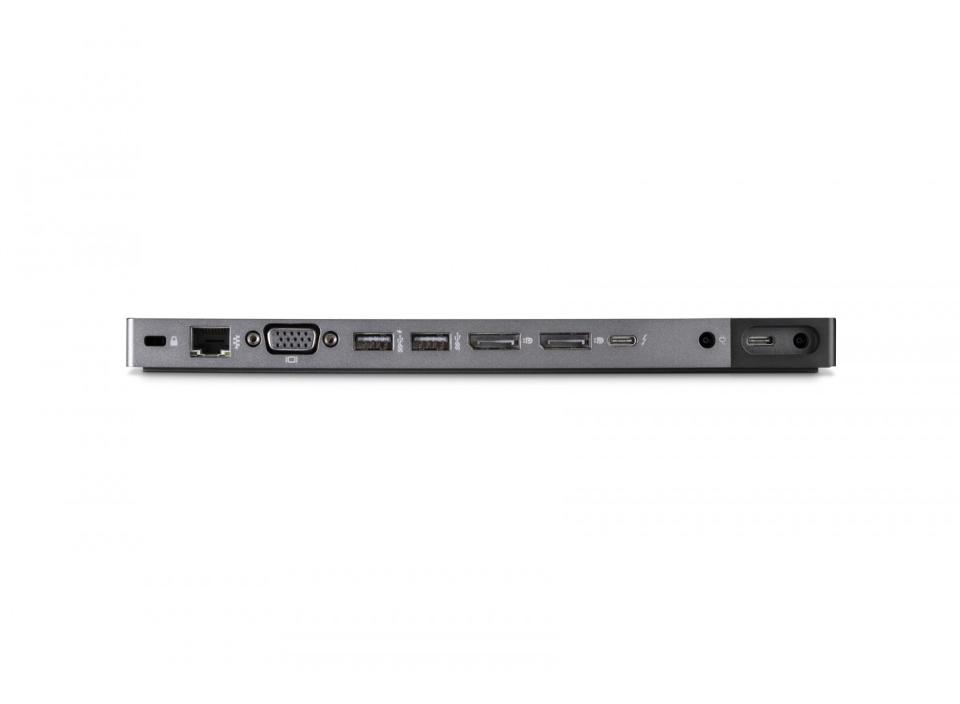 The EliteBook Folio G1 features two Thunderbolt 3 connectors which translates to support for things like the HP Elite Thunderbolt 3 65W dock. This dock includes up to 15 watts of charging power, two DisplayPort 1.2 connectors, a VGA and a Thunderbolt/power cable for video connectivity. There are also four USB ports with one being powered as well as Ethernet and support for cable locks. With that kind of connectivity, the HP EliteBook Folio G1 can display up to two 4K external displays using the dock. I used the Elite Thunderbolt 3 dock and it worked flawlessly. Good job, HP, really.

Responsiveness and performance from a Core M

During my time with the HP EliteBook Folio G1, I used it mostly in an general office productivity setup which means primarily Office 365 usage along with OneNote, Edge and Chrome. I also used Windows Universal apps like Photos, Twitter and Facebook, but did not attempt to run any games or workstation applications. People have given Core M a weak reputation, but they need to realize that not all Core M systems are alike, and most criticisms of Core M systems were only for the first generation. OEMs simply didn’t get that first-generation Core M right as it takes a lot of software tuning and mechanical/thermal design work akin to a smartphone than a PC.

Running a three-display setup, the 1080P Folio display, and a 2560×1440 as well as a 3440 x 1440 display was all setup and running smoothly through the Thunderbolt 3 dock. This is possible thanks to the Intel Core m7-6Y75 processor with Intel HD 515 graphics. The notebook is shockingly-responsive for what’s inside of it on paper, but that’s part of the magic. Infrequently did CPU, memory or disk usage reach 100%, but when they did it was when I had multiple browser tabs running at the same time with an ad or video running.

The battery life on the HP EliteBook Folio G1 was nothing short of incredible. It was one of the few notebooks I have ever used that lets me work continuously for eight hours. This was not done using canned benchmarks or automated tests, this was consistently tested by me using non-stop office work and I consistently got 8 hours of solid usage out of it. HP makes this possible with their extremely power efficient use of the Intel Core m7 series processors and their large battery. The Folio G1 packs a 4-cell 38 WHr battery, which is enormous for such a small notebook with such a power efficient processor. Naturally, this explains why the battery life is so long even though the EliteBook Folio G1 is so thin.

What I would love to see in the next gen

There are a few things that I could see HP implement with the EliteBook Folio “G2” or whatever they name the successor to the Folio G1. One of those things would be a full no-wires solution that uses wireless charging and wireless display with 802.11ad, this would bring us into the next age of portability. Speaking of portability, I think it would be great for the next generation to also have some sort of ubiquitous connectivity, preferably 5G so that for users it’s impossible to tell when they’re on network or off. The next generation will hopefully have something like Kaby Lake processors, which should be a given regardless of all other developments. I also would’ve like to see an upgrade to a 1080P webcam, why are there still 720P cameras on laptops? My smartphone has a selfie camera that captures 1080P, why doesn’t my notebook?

I would also like to see HP look at possibly integrating an edge to edge display with the EliteBook Folio G1’s successor. It would allow for an even more compact design and make it more portable than it already is while also improving aesthetics. I would also like to see some improved security through an integrated fingerprint sensor built into the trackpad and possibly a retina scanner as well. Finally, I would hope that the next generation Folio notebook from HP would feature some sort of intelligent assistant like Alexa or Google Assistant to help users to more naturally interact with their computers.

HP got many things right with the EliteBook Folio G1 and business workers and IT should love it as a mobile notebook but also as a general office productivity computer. It’s the first system I’ve ever personally used that gets both Thunderbolt 3 and USB Type-C docking right and they did Intel Core M right, too, which very few have. It’s super thin and light, gets great battery life, and is crafted to be durable. Surprisingly, it’s not a consumer notebook but an enterprise-class notebook with all the security and durability features that you’d expect from an HP EliteBook. You can have your cake and eat it too.