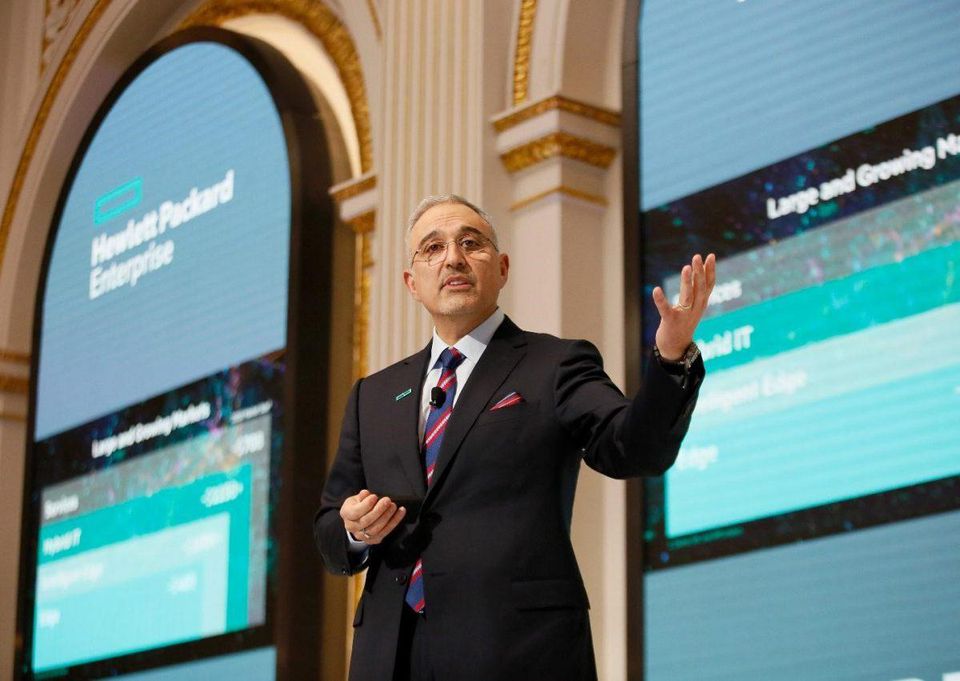 Last week, Hewlett Packard Enterprise held its annual Securities Analyst Meeting (SAM) at the New York Stock Exchange. The annual event represents the company’s opportunity to talk to investors about its past progress and financials but more importantly, talk about its future opportunities. It’s also a great chance to check in on the company’s overall strategy and execution which is why I, a technology industry analyst, tunes in. Today I wanted to share my takeaway of the meeting.  Overall, I was pleased with the disclosures, strategy consistency and the absence of drama.

Hewlett Packard Enterprise led off by sharing some historical performance highlights from the past year. It announced that it is expecting to finish the year off with 6% year-over-year growth. This significantly beats the guidance of 0-1% growth HPE projected at last year’s SAM. The second number HPE shared was its projected non-GAAP EPS—expected to show 60% year-over-year improvement (going off the mid-point outlook from the current fiscal year).

HPE’s Edge business continues to impress, with projected 13% growth, and the company says its Edge Compute segment is expected to grow “triple-digits.” HPE says its Edge security revenue has improved by 16%, thanks to its Clearpass and Introspect solutions. HPE also reports that Cloud with Aruba Central is gaining traction. HPC numbers are up by 14%, and storage (including Hyperconverged) is up by 24%. I like the edge market given the growth in IoT and 5G. The reality is that most all data is created on the edge, will be created on the edge in the future, and in many circumstances, it’s more efficient and performant to process and store that data on the edge. The public and private cloud in the datacenter is still a fine place to do any data processing that requires comingling of many data sources, AI, NL and DL training, transaction processing and longer-term storage.

In hyperconverged, Hewlett Packard Enterprise says it alone has grown over 140%, to an annual run rate of over a $1 billion. Given the current hypercompetitive field with Nutanix and vSAN, this is pretty good. Even more interesting was that the company says HPE Greenlake orders are projected to be up in excess of 50% and already has over $2B in total contract volume. Lastly, HPE says its “as-a-service” financial volume has increased by 14%, and its high-margin asset management business has improved by 11%.   I’m excited about the Greenlake growth as this is the future of consumption, but I’d love to see increased growth percentage from its “as-a-service” lines.

Executing on a consistent, edge-to-cloud strategy

I’ve followed HPE for a long time, and it seems to me now more than ever, the company has a very focused and consistent strategy—edge-to-cloud, which it officially unveiled at CEO Antonio Neri’s coming out party, Discover 2018. (read more here and here). I am glad to see the consistency of this strategy as for a few years; I sometimes felt the company was changing strategies every 18 months. Remember Helion? The company believes (and I do, too), that the enterprise of the future will be “edge-centric, cloud-enabled, and data-driven.” As such, it is committed to developing a portfolio that allows its customers to transform and fully leverage the data generated by this “hyper-connected world.” I believe there is customer value there.

It’s one thing to have a consistent strategy, but it’s another thing to have a product and services offering that support it. To build the offering, Hewlett Packard Enterprise has invested considerably in a number of areas— an edge-to-cloud platform, multi-cloud management (OneSphere), consumption-based service models (HPE Greenlake—read more here), and composable infrastructure, to name a few areas. I believe HPE has invested more in the edge as a percentage than any other large enterprise player I know, in particular when looking at Aruba and the EdgeLine portfolio. HPE believes that these areas present huge opportunities—a $100 billion opportunity in edge-to-cloud, a $115 billion market (and growing) in hybrid IT, and a $70 billion market (and growing) in services, and these forecasts pass my smell test.

A big part of these investments came in the form of strategic acquisitions and organic innovations Hewlett Packard Enterprise has made in the last several years. In the realm of composable infrastructure, it acquired software-defined networking company Plexxi earlier this year (read our storage analyst Steve McDowell’s take on the deal here) and IT service management company SimpliVity back in 2017. Its Cloud Volumes service came directly from its acquisition of Nimble Storage in 2017 (read more here).  Its wireless networking portfolio was bolstered by the acquisition of Aruba Networks back in 2015 (read more about HPE Aruba here).

A few things need to come in place for the HPE strategy to be most successful. First, customers need to view the company as a strategic advisor for everything cloud and part of that is expertise, but the other is by getting credit as the “Switzerland” of the public and private cloud by the effective use of OneSphere. This will take a lot of sales and marketing. HPE doesn’t have a dog in the cloud hunt, and theoretically, can bounce between any public cloud (AWS, Azure, Google GCP, IBM Cloud, etc) and private cloud stack (Azure Stack, Vmware Cloud, Red Hat, etc.).  Additionally, I’d like to see HPE transition its Synergy line to Gen-Z like architecture as soon as those are available as this is one key attribute to future-proofing. I am certain that is in the cards given all the work HPE has done in “memory computing.” Finally, HPE will need to ramp up its HCI growth a bit to start taking dollar market share.

Lack of drama and more consistency

I have to point out the marked difference between HP of the past and Hewlett Packard Enterprise right now. A lot of the difference is consistency, but I also must point out a lack of drama. For a company that (not so very long ago) was struggling to gain its footing, it looks black and white to me. One of the key themes I see here lies in the company’s current stability. It makes all the difference. Years back, it seemed like a major bombshell hit the company on a monthly basis—what seemed like perpetual layoffs and divestitures. Now, it’s basically crickets—which isn’t to say the company hasn’t been busy, they have, just that it has finally stabilized.  And this is good for the company’s customers, partners and employees.

In short, Hewlett Packard Enterprise had a good showing at its SAM financial analyst event- no surprises, no bombshells, no drama with a good plan that will require solid execution. I believe HPE has a focused strategy that targets major growth markets—namely edge-to-cloud, and offers some differentiation, especially on the edge, OneSphere and right now with Greenlake. A lot of this is thanks to its flurry of acquisitions and organic innovations in the last several years as well as what I see as a speedup in execution. We’re seeing the results of this in the company’s new-found stability and leadership. Nice work, HPE.