Two weeks ago, Hewlett Packard Enterprise became the first large server OEM to launch a two-socket server designed around the Advanced Micro Devices EPYC datacenter SoC, with the release of the HPE ProLiant DL385 Gen10 server. This makes sense, especially given the collaborative relationship between HPE and Advanced Micro Devices— in recent years, and stretching back decades with the old HP. Considering the historic success of the older generation HP ProLiant DL385 with Opteron, it seems fitting for HPE to serve as the lead OEMwith EPYC. So, the big question is, “is the server any good”? If I could boil this article to just a few words, I would simply say this server should perform very well in virtualization, big data, analytics, VDI and certain HPC workloads. To be clear, we haven’t tested it ourselves—we’re making these assertions based on feature sets.

First off, HPE can boast many “industry-leading” statements with the ProLiant DL385 Gen10 server: core count, memory capacity and memory bandwidth, PCIe support, and security. When coupling these features together, you have a server with a balanced architecture to drive many of the virtualized infrastructure needs of modern IT organizations. 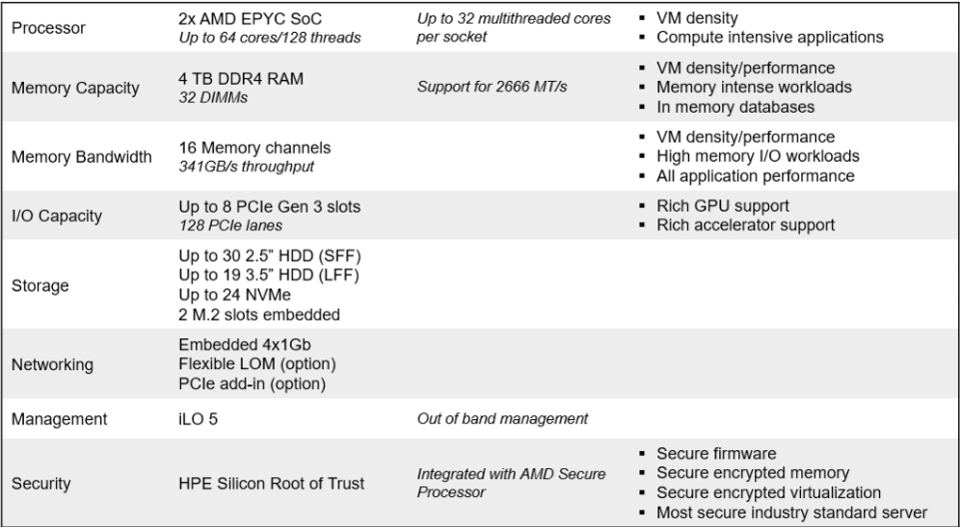 When HPE talks about its Gen10 portfolio in general and the ProLiant DL385, it likes to highlight three pillars of value: agility, security, and economic control. Let me go through these, attribute by attribute:

The promise of virtualization delivered

One of the main drivers of virtualization was the need to consolidate and reduce the number of physical servers in a datacenter. This consolidation was supposed to lead to both direct and indirect cost savings by maximizing hardware utilization, lowering energy bills, staffing, and maintenance, etc.

However, over a decade later the average utilization of a server still sits at about 30%. Part of the reason for this lack of utility is tied to server architectures. The imbalance between compute, I/O and memory have made it nearly impossible for IT organizations to achieve high server utilization and still deliver well-performing VMs.

The HPE ProLiant DL385 Gen10 has the potential to change this equation. The AMD EPYC SoC, which sits at the heart of this server, connects very high core counts to very high memory capacity, across a lot of memory channels. This increase in memory channels allows for more data to move from memory to compute cores, and by alleviating this bottleneck, more virtual machines can run with better performance. What does this mean to an IT organization? Real server consolidation can be realized without sacrificing performance or violating service level agreements (SLAs).

What to do with all this memory?

So, what do we do with all this memory? In two words, “Big Data”. The Hewlett Packard Enterprise ProLiant DL385 Gen10 Server appears to be architected for in-memory databases as well as Hadoop distributions. The 4TB memory footprint and 16 memory channels in a two-socket configuration mean bigger datasets can be analyzed and transformed into business intelligence, faster than the servers that house them today.

The HPE ProLiant DL385 Gen10 server should also play well in the traditional relational database management systems (RDBMS) space. Again, I would point to the large memory footprint married to many well-performing cores in the EPYC SoC. Some may read “many cores” and RDBMS and spit their coffee out at the thought of licensing. One of the compelling features of the EPYC SoC is feature fidelity across core scaling. The HPE ProLiant DL385 server will ship with core counts scaling from 8 to 32 cores per socket. In addition, regardless of the core count in your server, the memory capacity and bandwidth remain consistent, seeing as there is no scaling of features based on cores.

The performance of the HPE ProLiant DL385 Gen10 server is impressive, but I believe the most important capability of this server is rooted in its security. Hewlett Packard Enterprise has designed perhaps the most comprehensive security into its Gen10 server platforms (Moor Insights & Strategy has written extensively on HPE’s Silicon Root of Trust). Built into the iLO5 chip, this security establishes a hardware root of trust. Once a clean, authenticated process is completed, iLO hands things off to Advanced Micro Devices, where its security processor performs several functions. Two of the more interesting are:

This level of security is what separates the HPE ProLiant DL385 Gen10 the most from other servers, and it is one of the reasons I believe it should be given serious consideration.

Hewlett Packard Enterprise has designed a server that should increase IT operational efficiency and lower total cost of ownership. The HPE ProLiant DL385 Gen10 platform appears to be tailor-made for virtualized environments.

While virtualization and memory intensive applications (such as in-memory databases) are the sweet spot for the HPE ProLiant DL385, I believe this server will also be a strong choice for general purpose compute. The balanced architecture of the EPYC SoC at the heart of HPE’s design allows for provisioning and re-provisioning for any number of workloads (MI&S has written more extensively on these capabilities).

Hewlett Packard Enterprise would be well-served by developing evidence-based marketing that will help customers along the ProLiant DL385 buying journey. I’m talking about benchmarks that demonstrate virtualization superiority, and customer testimonials that speak to “ease of deployment” and projected TCO savings. My experience has taught me there’s no greater sales tool than customer case studies.

It is exciting to see the server market competitive once again. I expect many IT organizations will be giving the HPE ProLiant DL385 Gen10 server serious consideration for their virtualized infrastructure.