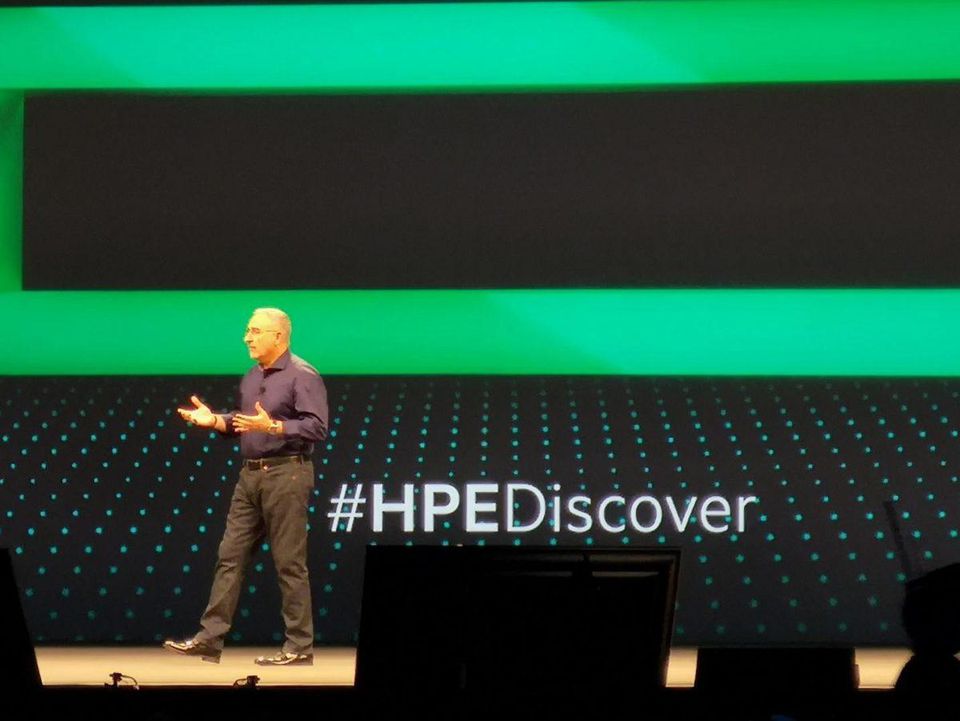 Last week, analysts Will Townsend (networking), Matt Kimball (compute), Steve McDowell (storage), Rhett Dillingham (cloud), and I spent most of the week in Las Vegas attending HPE Discover 2018, taking in all the latest announcements from the tech giant. This year’s event is notable, amongst other things, for it is the first held in the U.S. under newly appointed President and CEO Antonio Neri, who took over for Meg Whitman late last year. Here are my broad takeaways from the big announcements and overall vibe of the week. The rest of the team will be doing deep dives. You can already find Will’s update here and Matt’s here.

President and CEO Antonio Neri kicked off the general session talking about his personal past and HPE’s future. I’ll try to stay focused on the actual announcements, but as a former mid-Westerner, I do have to say that I really appreciate “roll your sleeves up” tech CEOs. Neri’s “get to work” mentality shone through, and the fact he was on stage most of the keynote sent the message that “he’s in charge.” Former CEO Meg Whitman typically rolled on-stage for some high-level context setting and then rolled off to give the stage to someone else for more details. Neri stayed on the entirety of the keynote, sleeves literally rolled up without a jacket, setting strategy, context andproviding details, exemplifying his depth of the big picture but also his grasp of the technology and customer needs.

Neri first outlined what HPE sees as the characteristics of the enterprise of the future: edge-centric, cloud-enabled, and data-driven. I heard about a hundred times at the show, “edge to cloud” and it’s hard to argue with these as a way to simply segment the enterprise.

One of the first bits of razzle-dazzle Neri announced was that HPE had officially reached the 1 million mark in OneView licenses. This is impressive, to say the least, as we don’t normally hear software numbers like this associated with HPE. OneView, for those unfamiliar, is HPE’s IT infrastructure management software stack, that allows users to manage their systems from a single, unified, global dashboard. OneView is a keystone of the go-forward HPE strategy as it underlines the future of its autonomous centers of data strategy from edge to cloud.

Neri went on to announce a $4 billion investment in the intelligent edge over the next four years, officially making HPE part of the billion-dollar IoT club which is very popular as of late. HPE doesn’t often make these types of announcements, and I believe the edge is one of the company’s strongest suits, so I don’t view it just as press release fodder.  HPE sees where the industry is going and is intelligently investing in it.

The biggest announcement from the event for me was the unveiling of HPE GreenLake Hybrid Cloud, the company’s first foray into what I consider an underserved Cloud Managed Services market. The GreenLake Hybrid Cloud is a new consumption service designed to help enterprises manage their on- and off-premises clouds.

GreenLake Hybrid Cloud is essentially an automated cloud operating model, setting up processes to manage cloud resources (in popular solutions like AWS, Microsoft Azure, and Azure Stack), establishing various controls (cost, security, compliance, etc.), and managing these resources. Over time, I believe that more and more enterprises will need this kind of service as public and private mature. If public cloud services become more homogeneous, then enterprises will want to arbitrage across less differentiated public clouds and across their own. If public cloud services become more heterogeneous and specialized than cross-cloud tools and services become even more vital. GreenLake Hybrid cloud makes sense in any scenario.

HPE says that what sets GreenLake Hybrid Cloud apart from other managed services is that it is all automated and cloud-native so that organizations theoretically won’t need to hire and train new staff to manage and oversee it. I believe the HPE GreenLake Hybrid Cloud value proposition is strong—it’s hard to debate that. However, the company still has a lot of execution to go, and it won’t be easy, and I believe the market wants to see how HPE executes before diving in as prior cloud attempts like Helion fell flat. I’ll be watching with interest. Moor Insights & Strategy cloud analyst Rhett Dillingham will be drilling into this later.

I believe Aruba was one of the best acquisitions HPE, and for that matter, that HP did in a long time. Its edge network solutions, with its simplicity and business-first approach, has turned many heads in the industry and for that matter, delivered double-digit revenue gains.

HPE Discover 2018 also gave us a new offering from Aruba, its new Software-Defined Branch (SD-Branch) solution. This new solution combines cloud-managed SD-WAN and wired/wireless networking solutions to help modernize branch networks to deal with the explosion of IoT and mobile devices and the ever-evolving cloud. I believe SD-Branch can provide the simplicity at the enterprise scale, by providing a single point for SD-WAN, wired and wireless networking, and policy enforcement—all of this while integrating best-in-class security.

HPE on the intelligent edge

HPE was the first, large enterprise vendor I remember who jumped on the “full” edge compute bandwagon. By “full” I mean compute and storage that an enterprise would normally have in the data center, can now reside at the edge.  The reason why edge computing is becoming so popular is the reality that without the right compute and storage at the edge; it will be very hard to provide the performance and low latency required to serve a new set of apps. Those edge compute apps could be for IoT, 5G, or self-driving car applications in the energy, healthcare, retail, manufacturing, and healthcare verticals. How much latency is required for a manufacturing robot of the future, who is learning on the fly? Likely it will need latency lower than the private or public cloud can handle. This is the whole point of “edge computing”, to increase the performance and the lower latency of the apps that matter.

In addition to the $4 billion-dollar investment in the intelligent edge, HPE announced a new family of software solutions designed for edge-to-cloud applications, enabled by HPE’s Edgeline Converged Edge Systems. These solutions are designed to allow organizations to run enterprise-class applications, in real time, unaltered, out at the edge closer to where the data is being created. The new family of solutions is capable of operating “unaltered on the edge” include solutions from who you would expect- Microsoft, Citrix, SAP, and GE Digital, to name a few. While the word “certification” wasn’t used, this is how I view these announcements. Slowly, but surely, these massive ISVs are seeing the benefits of investing on the edge.

I couldn’t help to notice that Tesla joined HPE’s Dr. Tom Bradicich on-stage to espouse the benefits HPE EdgeLine delivered to Tesla’s manufacturing capabilities. I rarely, if ever, have heard Tesla give credence to a supplier and all I can assume is that HPE is helping Tesla to improve their line throughput.

While the industry term “big data” has become passé as of late and replaced with “AI,” “ML” or “DL,” the fact remains that massive amounts of data are required to perform all things AI. To get very basic, I will start by saying that all things equal, memory is higher performance but more expensive than storage, and we are continuously copying data between the two. Think of HPE’s memory-driven computing initiative as creating massive data planes that don’t distinguish between memory and storage where compute will have immediate access to petabytes of data. Also, part of this is compute that has direct access to the data without the latency of busses like PCIe. To best take advantage of memory-driven computing, applications and operating systems are changing. It’s of note that Memory-Driven Computing is a key part of HPE’s mysterious “The Machine” project, which it has been teasing for the last several years.

HPE announced at Discover 2018 what it is calling “an incubation practice with specialized skills” that leverages HPE Pointnext and Hewlett Packard Labs to solve big data problems with memory-driven computing. Pointnext’s advisory and professional services can help advance the field of Memory-Driven Computing, by looking at potential applications and delivering proofs-of-concept for customers.  HPE also announced that Pointnext was already putting these new skills to work with its first customer in this initiative, Travelport, a global travel commerce platform.

I noticed that HPE appeared more solutions-first, technology-second, in how it told their stories. HPE has some really good technology, and over the years I have been accustomed to experiencing the company primarily through the technology lens. I view that not only as a positive but more what customer lines of businesses are looking for.  It also felt like the event was more fun and vibrant.

An embodiment of both of these was the “Hybrid IT Monster,” an example of getting a message across that speaks directly to what enterprises are facing today but in a fun and light way.  Prior HPEs and for that matter, HP, have seemed super-serious and some might call a bit stiff. I like this direction and hope to see HPE taking some more risks like this. I like where new CMO Jim Jackson is taking this.

All in all, it was a good showing for HPE—plenty of new announcements with more energy than I have seen in a while. HPE is going big on the intelligent edge, which I believe is a huge opportunity, and it just works with the relevant backdrop messaging of “edge to cloud” that I think any large company can relate to.  Under the new leadership of Antonio Neri, the company looks to be heading in a good direction and hitting many of the right notes. In the end, I think it will be all up to the company’s execution, which needs to be decisive and fast, but this is a good start with Neri at the helm.