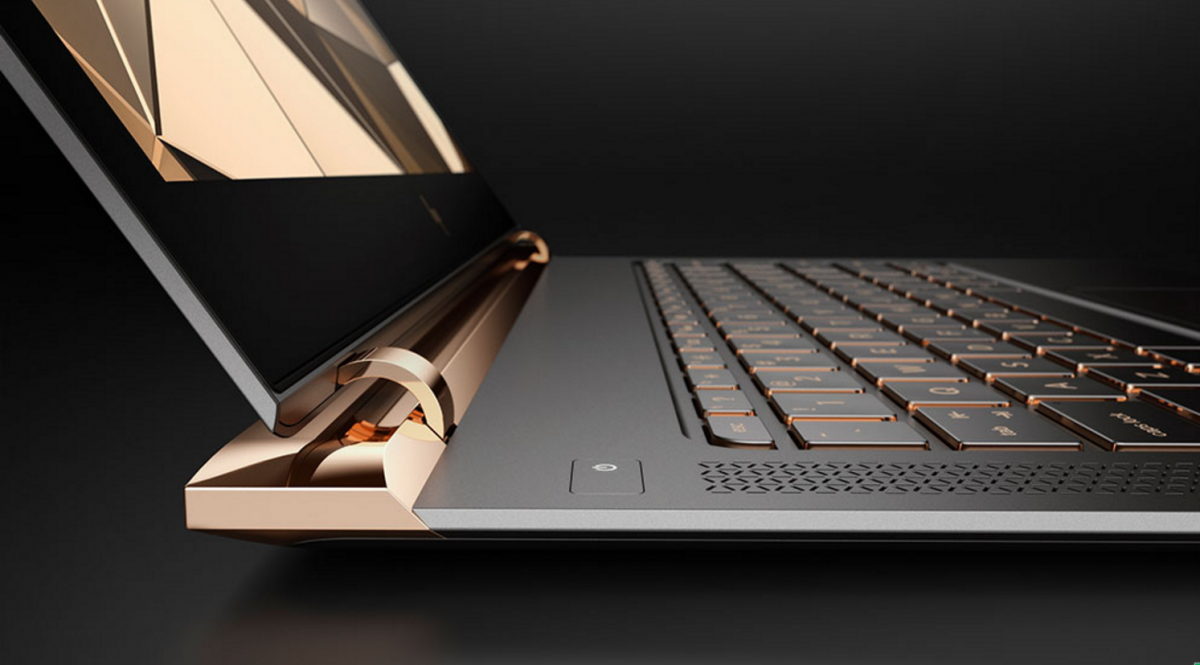 In any very competitive market, it is extremely important to have a premium line so that you can have a successful “better” in a “good”- “better”-“best” product lineup. HP Inc. has amped up their premium notebook game over the last few years and they did this both in terms of both great product design, breadth of their product portfolio, and paying attention to the fine points. What’s even more important isn’t just to release one premium product but to continue to release them with improvements that keep the line fresh and attractive.

Earlier this year, in my opinion, HP Inc. proved that they have sustained their consistency with a premium PC lineup. Now, according to NPD and communicated at HP Inc.’s industry analyst conference I attended last month, they’ve managed to gain U.S. retail market share in the premium $800 and above laptop space.

Related to their premium line, I have spent a month with HP Inc’s latest premium laptop the HP Spectre 13, using it as my primary device, and want to share my thoughts with you.

Spectre 13 design…. the thinnest laptop you can buy today

The HP Spectre is a culmination of HP’s long term goal to make their computers the best looking in the industry in addition to taking the overall experience very seriously… and personally.

This started by making the Spectre 13 a crazy, 10.4mm thin which allows it to be extremely sleek and extremely portable so that you can take it everywhere and anywhere. This is further supplemented by its extremely light weight of 2.45 lbs which includes a 4-cell 38 WHr Lithium-Ion battery that HP states provides 9:45 hours of battery life on the MobileMark 14 test. The weight and thinness enable what is possibly the sexiest design of any laptop I have seen.

One notable design point is the copper-colored, CNC’d aluminum, recessed piston hinge which enables much of the “thinness”. While I don’t usually prefer brass, copper, bronze or gold phones or tablets, this somehow works really well. I’m sure some very astute designer could explain why that is.

The CNC-machined and anodized, not stamped aluminum, and forged carbon fiber the Spectre 13 integrates into its design are something that I have always liked in combination. The aluminum cools everything off and the carbon fiber on the bottom makes it cooler to the touch. It just makes so much sense.

The notebook charger also looks like it was designed with the consumer in mind with an attractive look, not a warmed-over commercial design forced on the consumer. All of these design decisions lead the Spectre 13 to have a very rigid design, not flimsy at all, while also looking beautiful.

While the HP Spectre 13 is a very good looking laptop, it isn’t all just looks. The HP Spectre internals pack a high performance set of specs including an Intel Core i5 or Core i7 processor and PCIe storage up to 512GB. This is important when you consider that other competitively thin and light laptops likely pack something like an Intel Core M which is roughly 50-90% as fast, all things equal.

The Spectre uses Intel’s improved and integrated HD 520 GPU for graphics, which results in a very compact design that is cooled by HP and Intel’s “hyperbaric” cooling solution that uses dual fans to create positive pressure to push hot air out the back of the chassis.

These performance specifications allow for a “near-desktop” replacement class of performance, but doesn’t quite get there due to a lack of a dedicated GPU and lower wattage 15W CPU versus a higher wattage 45W Core i7 found in desktops and thicker laptops and workstations.

The new HP Spectre 13 laptop has three USB Type-C connectors, two of which have Thunderbolt 3 connectivity and enable up to two, 4K displays output. 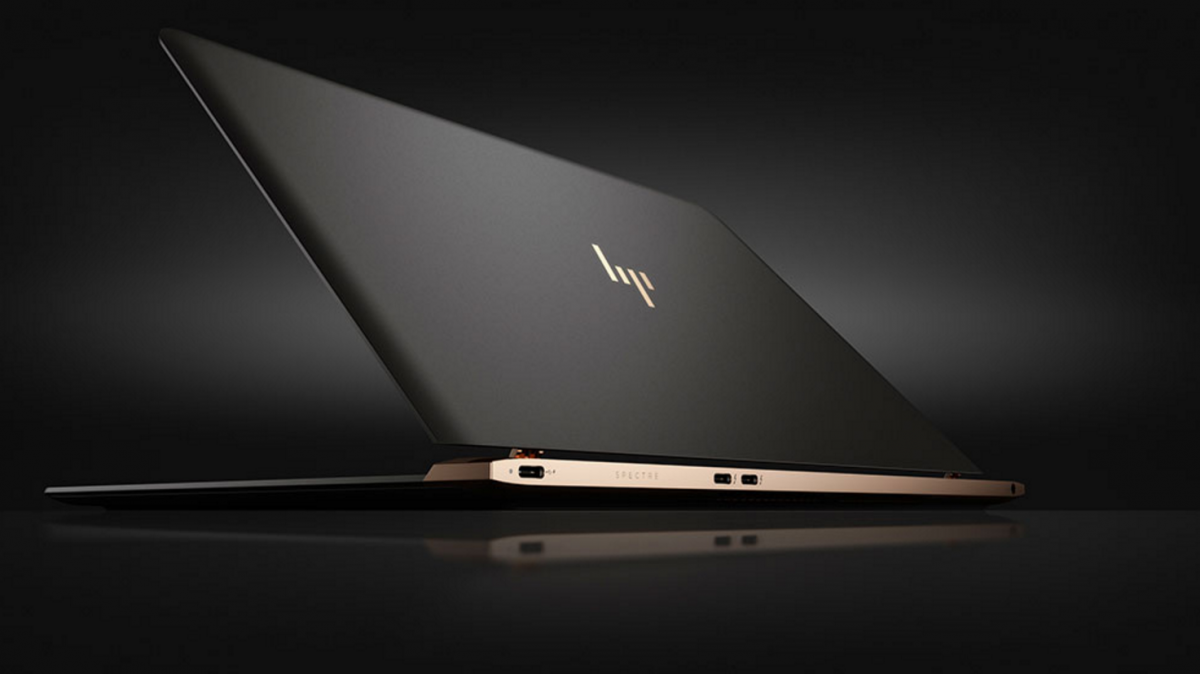 This kind of expandability is absolutely necessary for a thin laptop. The only limitations to this design are that HP’s laptop charger is the only USB Type-C charger that will charge the laptop, but according to HP, this was done for safety reasons given the precarious, industry state of USB-C charging.

The other physical attributes of the HP Spectre 13 were equally as impressive as the internal components and the connectivity. Namely, HP spent a lot of time and effort on the keyboard and touchpad on the Spectre, installing a full-sized, backlit keyboard on a 13” laptop with 1.3mm of travel on the keys and still didn’t feel like any compromise had been made for the sake of thinness. The only thing that HP could possibly have improved is the leakage of light from the backlit keyboard. Three stages of backlight would be nice, too.

HP also spent quite a bit of time and effort on the touchpad and opted for a glass Synaptics touchpad which from my experience has been the best touchpad solution for high-end laptops. The touchpad on the HP Spectre was great and some reviewers had some heartache with it but I believe it’s because they use Macs all day and it’s a personal preference.

The Spectre touchpad has an actual hinge, unlike the new MacBook which gives it physical travel as opposed to the creative illusion of travel the new MacBook provides. Both solutions work great in my opinion and come down to manufacturer decisions and design choices. I wish the top of the Spectre trackpad were clickable, but that’s the tradeoff you have if you use a hinged trackpad in a super-thin laptop.

The display is a 13.3” full HD 1080P solution with really good color quality at 72% color gamut and at an extremely bright, 300 nit maximum brightness. Even with all of the aforementioned hardware, HP is pricing the Spectre at a very reasonable $1,249.

As in life, there are tradeoffs with the thinnest laptop

The Spectre is great, but as with everything in life, it isn’t without its trade-offs. These aren’t criticisms, just things you should keep in mind if you are considering buying the Spectre 13.

The display is a non-touch display. HP’s consumer research suggests thinness and battery trumps touch but some have grown accustomed to touch in Windows 8/8.1/10. You should understand that adding touch will reduce battery life and increase thickness, so certain sacrifices had to be made in order to accomplish this level of thinness. If touch is what you want from HP, consider the HP Spectre x360.

As for 1080P resolution, I didn’t “see” pixels, and 1080P undoubtedly gets you a certain price point. I normally see pixels on other 1080P displays and I believe the bonding HP used reduced the ability to see the pixels. Very clever. HP has been one of the companies not to chase after resolution for the sake of meeting the spec wars and I actually admire that because it goes so across the grain. They have been more focused on accurate color reproduction and battery longevity rather than just providing the best possible specs on paper.

As for battery life, I achieved battery life of roughly 3-4 hours of continuous use under normal productivity usage using apps like Microsoft Office 365, Edge, OneNote, Twitter app, Facebook app and while connected on WiFi. This is about two-thirds of what I would get with a fuller-sized Windows notebook like the Microsoft SurfaceBook. Also note the difference between my 3-4 hours and MobileMark 14 benchmark is that the benchmark adds “pauses” to simulate you going to the bathroom or to a meeting or to lunch. My figures are continuous use without pauses. Finally, battery life is very dependent on the specific applications you have so your mileage may vary.  If a few more hours battery life is what you want with a premium HP device, consider the HP Spectre x360. 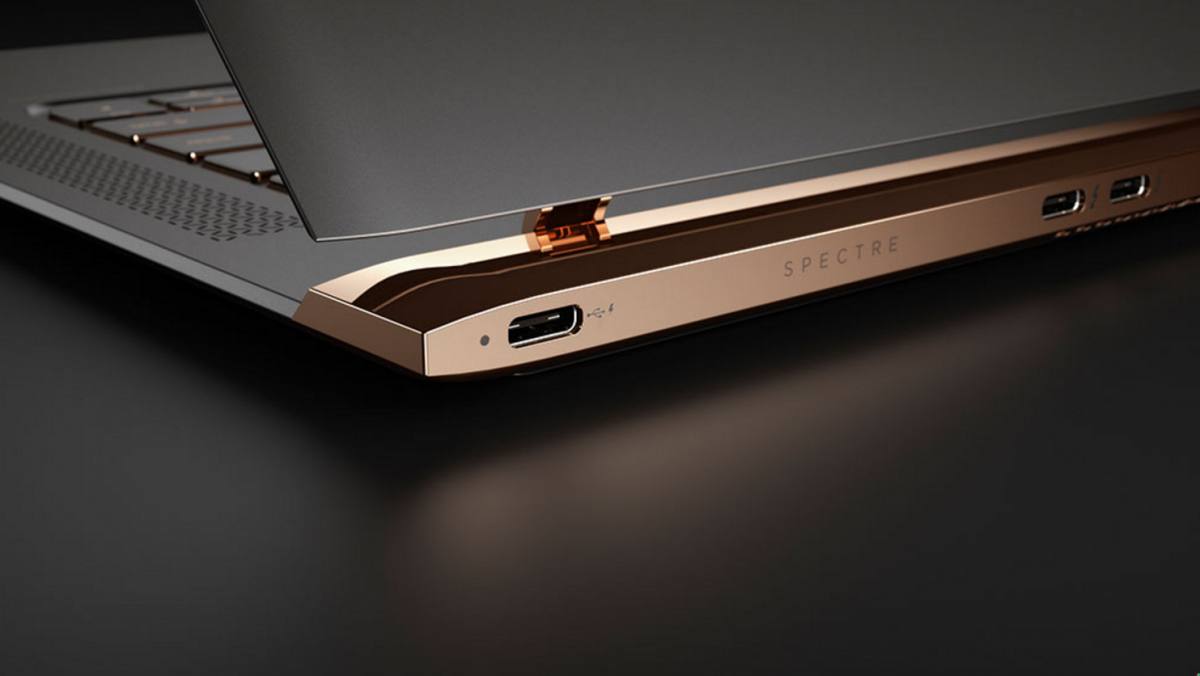 Contrary to other Spectre 13 reviews, I didn’t hear fan noise nearly as much as other reviewers. The fan was only noticeable to me when the Spectre was plugged in when I was doing heavy multi-tasking. On battery or doing normal office productivity, the fan was rarely if ever audible.

The HP Spectre 13 fulfills an important need for HP Inc. to own the “st” of something relevant to the consumer and very merchandisable at retail. If you have ever run product management or product marketing, you know how important that is particularly when it comes to a premium product.

With the Spectre 13, HP may even own two “st’s”. The HP Spectre 13 may be both the sexie(st) and thinne(st) notebook with performance features like an Intel Core i7, PCIe storage and multiple USB Type-C connectors with Thunderbolt 3. The HP Spectre enables ‘near’ desktop-like performance without weighing like a brick or looking like one either. Literally, you could come in from the coffee shop, connect to a Thunderbolt 3 dock via two cables and use two 4K displays, full-size keyboard, full-size mouse and external storage.

After a month of non-stop use, I can say the HP Spectre 13 is a marvel of engineering and a refreshingly unique notebook in a sea of homogeneity. If features like touch and higher battery life are more important to you than having the thinnest and lightest HP notebook, then check out the Spectre x360 or the EliteBook Folio, they are both great HP premium notebooks as well.