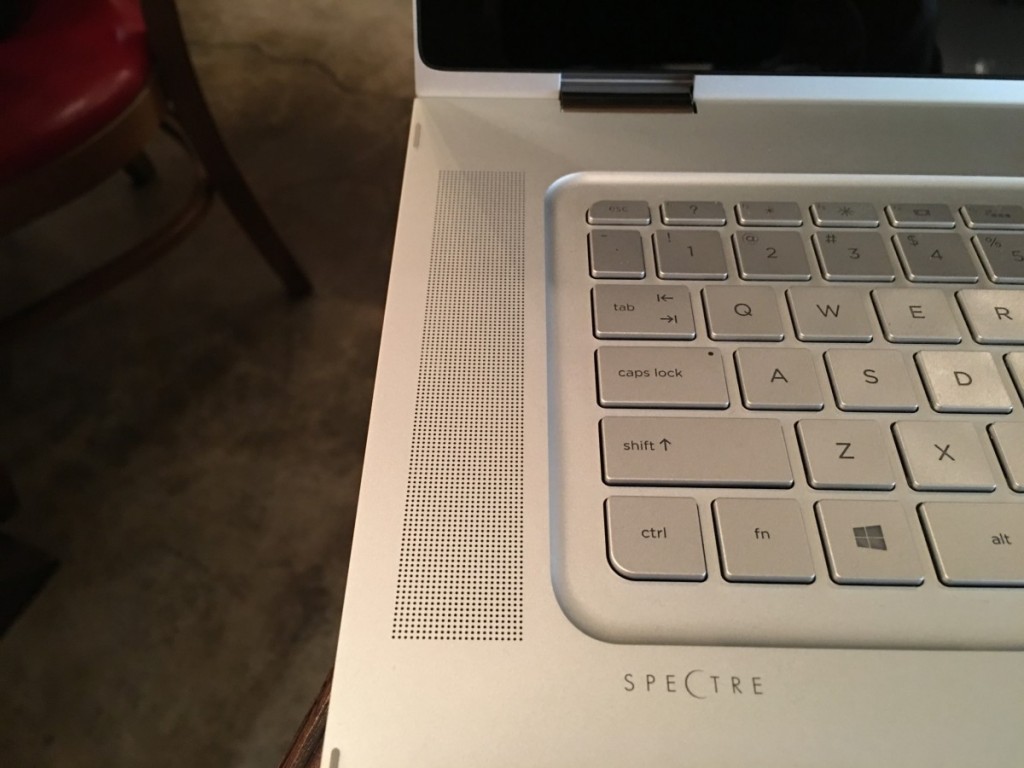 Four years ago as Hewlett-Packard, the company appeared to deprioritize the premium PC space. The company seemed a lot more focused on the much higher volume, mid-range and entry-level space than the lower volume, yet higher profit margin space dominated at the time by Apple. It’s a tough space, particularly if you forecast incorrectly and sit on expensive, cutting edge supplies. Tooling, engineering, distribution and marketing are the most expensive in the space, too. The premium space requires a high level of commitment to details, design and premium features. Marketing, experience and branding then needs to follow suit. If all those aren’t in place, it’s very hard for any company to command a premium price. I believe this has changed in the last two years at HP Inc.

I believe HP Inc. is now committed to the premium PC space and is investing the resources, including people, to make a serious run there. Premium product lines require attitude changes in how the space is looked at and approached, too, and no one embodies this more than HP Inc.’s Mike Nash. Nash is VP of Customer Experience and Portfolio Strategy, joining HP three years ago from Amazon.com and Microsoft Mike is the guy who is on the hook for customer metrics like the Net Promoter Score (NPS) and initiates programs, products, and features that most impact the experience. Coincidentally and randomly, I sat next to Mike on a 12 hour plane ride to Mobile World Congress 2015, the longest briefing of my life, where he went through every single design detail, including all the physical pieces and parts, of one of their yet-to-be-announced PCs at MWC15. Mike also gets to say “no” to decisions that are moves that him and his team believe could be detrimental to the experience. Every company who designs and develops products needs someone like Mike. Sometimes it’s the CEO like Steve Jobs, other times its the GM, other companies it’s Mike. I’ve seen them all.

Mobile World Congress 2015 marked the point of HP’s premium “rebirth” with the Spectre x360. Judging by HP’s CES 2016 announcements, it’s quite clear that the Spectre x360 was not just a fluke and that the company has been working feverishly to produce more high quality premium notebooks and experiences for both consumers and business.

One of the most talked about new devices at CES this year was HP’s 12.5” EliteBook Folio, which is only 12.4mm thin, HP’s thinnest business-class notebook ever. But this notebook isn’t just thin and good looking like in the consumer space, HP also spent extensive time making the notebook durable enough to pass MIL-STD 810G testing. That’s not easy, by the way. This EliteBook Folio exemplifies consumer sexy with commercial durability.

HP’s EliteBook Folio is also designed with the highest levels of security that HP offers with HP Sure Start with Dynamic Protection as well as Windows 10 with multi-factor authentication (MFA). One of the best features of the EliteBook Folio is in its dual Thunderbolt 3 connectors which are also USB Type-C, meaning that users can use those ports for anything from a USB drive to running a 4K display. Using USB Type-C connectors only also means that the EliteBook Folio can be as thin as it is. All of this, plus an optional UHD 4K display are fit into a sleek sub-1KG or 2.25 lb aluminum body which makes this notebook all the more portable and impressive. The EliteBook Folio won WSJ’s ‘Best of CES’ award, PC Mag’s ‘Best Business Laptop’ as well as Techradar’s ‘Editor’s Choice’ for best laptop.  I’ll be interested to try one out on my own and see how the experience compares to my Apple MacBook.

In addition to the EliteBook Folio, HP has announced more new notebooks and UltraBooks to create a full family of premium, business-class devices. HP announced the HP EliteBook 1040 G3, which HP says is the world’s thinnest business class notebook as well as the EliteBook 800 G3 series, a generational refresh of their previous EliteBook 800 series notebooks. Both of these notebooks feature Intel’s latest 6th generation core processors as well as PCIe Gen 3 SSDs and DDR4 memory. All of the devices also come with Bang & Olufsen sound as well as HP noise reduction software and HP’s Clear Sound amplifier to deliver quality audio in critical applications like video conferencing. I really like that HP is putting so much focus business audio as it is so often forgotten about. Bang & Olufsen may seem like an overkill for commercial, but it isn’t, as millennials want great sound on their work PCs. I write about minimalism and  the impact on commercial PCs in a paper here. 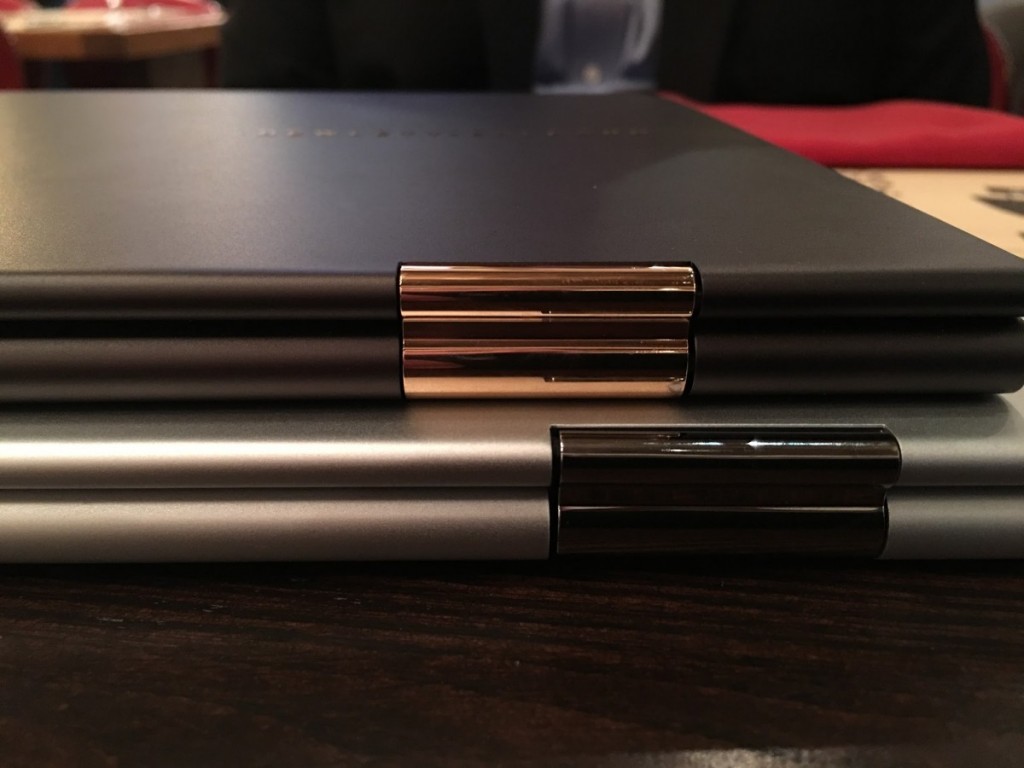 The EliteBook 800 is available in 12.5”, 14.0” and 15.6”  display sizes ranging from HD up to UHD 4K. The EliteBook 1040, however, is only available in FHD (1080P) or UHD (4K). These devices also have security and manageability in mind with built-in support for a multitude of software and hardware-based security solutions including an optional hardened fingerprint reader. For portability, HP is also offering a Notebook Power Bank which is designed to work with the HP Pro and Elite series notebooks to give them more unplugged battery life as well as charge up to two mobile devices at the same time.

Transitioning from HP’s premium business-class devices, the company also announced new consumer hybrid PCs. These new consumer PCs include the 15.6” version of the Spectre x360, an OLED display option to the already well known 13.3” Spectre x360 as well as the Pavilion X2. The 15.6” version of the Spectre x360 comes with a 4K UHD touch display with optional Intel Iris graphics and up to 16GB of DDR4 memory. This notebook, like virtually all of the notebooks in HP’s premium line of notebooks features front-firing speakers tuned by Bang & Olufsen. It also has a sleek aluminum body like the rest of HP’s premium notebook line and measures in at only 15.9mm thin and 4 pounds.

Last but not least is the 12.1” HP Pavilion x2, a detachable PC in a fairly large 12.1” size with a latch-less magnetic connector. I really like this product. With the keyboard attached, the Pavilion X2 can tilt up to 130 degrees and allows for the user to make use of a full size keyboard with 1.5 mm of travel and a 54 x 97 mm touchpad. The tablet portion of the Pavilion x2 weighs only 3.23 lbs and is 14.3 mm thick making it one of the thinnest 2-in-1s in the Pavilion lineup. It also features a 1080P display and is powered by either an Intel Atom with 64GB of eMMC or an Intel Core M with 128GB or 256GB of storage. It also, like many others, features a USB Type-C connector that allows for both charging and data transfer over the same cable as well as a full size USB 2.0 port for legacy devices. It, like the rest of the HP line announced at CES also features front-facing speakers tuned by Bang & Olufsen which rounds out the premium features of this 2-in-1 PC.

Overall, HP Inc. made a pretty significant showing at CES 2016 this year in terms of products and they made it quite clear doubling down on the premium space. They want to continue to deliver more and better premium products and experiences that satisfy the demands of the market while also still paying attention to the latest technologies and making those technologies work for them in their designs. The competition among the major PC vendors is finally starting to heat up again in the premium space and that heat is producing some real diamonds.