As a technology analyst, I spend a lot time analyzing and keeping the pulse on the latest in inflection points, the ones that matter. Modularity is one of those factors and will be an 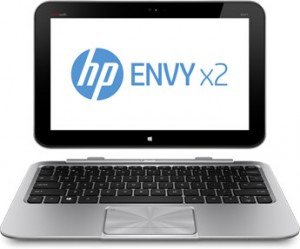 important thing to keep an eye on for the next 5-10 years. In present day, modularity is important with the smartphone to the TV and the tablet to the keyboard, the latter the subject of this analysis.

The entire PC market is in a bit of a funk driven by the macro-economic environment, but primarily driven by consumer’s fascination with smartphones and tablets. Many consumers voted in 2012 to buy a new tablet, upgrade their phone rather than upgrade their PC.  Hybrids and convertibles over time will change this and I believe 2014 is the year where consumers will view PCs as perceptually cool again. The process will start this year, but end in 2013.

Tablet hybrids first came officially on the scene with the Asus Transformer, an Android-based tablet that fit into a keyboard. I have spent a lot of time with hybrids from the Transformer to the Samsung ATIV to the Surface RT and now after having spent a month with a new device, I will share my experiences with HP’s ENVY X2 latest consumer hybrid.  The X2 is very different from the predecessors I tested before it.

Design
The first thing that’s different about the X2 is its striking, all-brushed aluminum design. During my month with the X2, I visited three different countries and spent a lot of time in airports and trade shows floors where I took the X2. Many people would ask me what is was and comment on the design. In tablet mode, it is extremely thin and feels like an iPad but an 11.6″ one. In laptop mode, some people thought it was a MacBook Air until I popped off the tablet. When I pulled off the tablet, every single person said “wow”. The power and volume buttons are flush with the system and designed to be used without the user re-orienting the device which is a nice attention to detail.

Weight and Dimensions
The X2 weighs in at 3.11 lbs, which is a bit heavy for an 11.6″ notebook, but aluminum isn’t plastic, which is lighter. This is a design trade-off that consumers will usually always accept as long as it is near that 3 lb. mark.  As a tablet, I didn’t feel like I was straining, either.  My guess is that it is heavier than the MacBook Air because it needed counter-weight in the keyboard to keep the unit from tipping over, as all the major components are in the keyboard.

Keyboard and Trackpad
The hybrid comes with a full-sized keyboard with full-sized trackpad that is responsive to the full Windows 8 gesture set. Most hybrids cheap-out on the trackpad and I think the use of Synaptics is to be commended. I wrote everything including research papers on the keyboard which has function keys, delete keys and arrow keys and never felt cramped.

Multimedia
Thankfully, the product managers didn’t cheap out on the multimedia features. The X2′s rear camera is 8MP which is much appreciated at volleyball and basketball games. Yes, I am one of those annoying parents taking video with a tablet. My rationale is that it is better than on my phone which will suck the batteries dry. If you don’t understand this then you probably haven’t spent three, 10 hour days of club-level volleyball with your  kids.  The camera also has a very bright flash, unique in its class. The front facing camera supports 1080P video, much appreciated on Skype. In the follow on products, I would like to see some work done on the camera subsystem to take pictures as fast and as high quality as a phone.  This is primarily of the Intel Hive-acquired ISP.

At 11.6″, the display was large for a tablet and perfect for a highly mobile laptop. The 1366×768 resolution is perfectly fine for notebook mode and even watching movies. I love higher-res displays like Retina, but there are certain use cases a user must have them so they don’t see pixels or need the fidelity for photos. This isn’t one of them as an 11.6″ display tablet isn’t the one you will use in bed and read a book on. That’s better territory for the Nexus 7 or ipad mini. The closer the display is to the eyes, the higher the res should be so you don’t see pixels unless you must see original view of pictures.

Expandability
Compared to just a tablet, the X2 offers the full sized keyboard and trackpad that converts it into a small notebook. The tablet holds one microSD card slot for photo or data transfer. The keyboard dock has a much-appreciated full HDMI connector and a full-sized SD card slot for inexpensive mass storage. I really appreciate the full HDMI slot as I cannot tell you how many of the iPad HDMI adapters I have lost.  The dock also has two USB 2.0 slots and mini-connector for speaker and mic. After my long business trips, I appreciated coming home and connecting the X2 to my 32″ display extending my experience even further.

Durability
I dropped the X2 (unintentionally) twice on concrete floors and I can say the unit fared a lot better than I expected. Using many devices, I have broken many devices and I have broken three iPads. After my unexpected drop-test, the unit suffered only scrapes but no cracked display.

Software and Hardware
The HP hybrid runs all Metro-based apps as well as Windows desktop style apps. This is great and I really appreciated using Outlook with Google Sync plug-ins, fully-synced Google Drive, Google Chrome and Evernote. While I consider myself a sophisticated user and know the limits of the system, I can see how a general consumer could easily overload the system. While the dual core, four thread Intel Z2760 (aka Clover Trail) is good in its class, it’s not the processor you can do everything a Core i Processor is designed to do. On occasion, I had too many Google Chrome windows open and the system came to a crawl. I also found myself running out of storage space due to my own fault of putting my Google drive and Outlook .OST on the C drive. I didn’t feel comfortable putting it on the SD cards because I have sensitive and confidential information there. I am very much looking forward to Intel’s next generation Bay Trail in this form factor.

As with full Windows 8 and X86 processor, I can connect just about every hardware peripheral I have and it just works. I connected all my mice, cameras, printers and they just worked.

Battery Life
The X2′s battery life was the biggest shocker. In tablet mode, I got around nine hours with the tablet and with the keyboard, I got around 14 hours. I didn’t do official benchmarking, but I did test while on many transcontinental trips where I was writing research papers.

Price
Price is a challenge to place a verdict on because the X2 is just so versatile. Launch pricing was set at $849 for the 64GB-WiFi edition but right now, the unit is selling for $599 on sale, which is an absolute steal. At $849 one must compare it to the MacBook Air which starts at $999 and apply value to touch, convertible design, and battery life and deduct for Core i5 performance. At $599, the X2 with keyboard is a no-brainer as compared to the 64GB iPad 4 at $599.

Conclusion
The HP ENVY X2 shows that hybrid designs are evolving to a point where in late 2013, early 2014, consumers will need to find some other justification to pay $499 for a tablet-only design that doesn’t elegantly dock in a very integrated fashion. By elegant and integrated, I’m not talking just about adding a Bluetooth keyboard, but deeper integration like that of the X2 and beyond. By 2014, no premium-priced (499+) tablets will sell well that cannot do this and OEMs and ODMs will need to address this and invest in better modular capabilities.  And as Apple scorned video on the iPod and 7″ tablets, I am sure they have a few prototypes of a few “fridge-toasters” in test which would make for a very interesting 2014.