I recently attended Dell‘s Annual Industry Conference (#DAAC) in beautiful Austin, Texas. I have staged and attended many 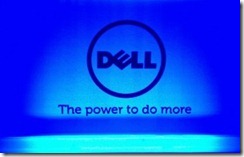 conferences like this before and this was similar to those, but also different in many ways. I’ll get into later. One thing that kept repeating through my head was that Dell has all the characteristics to drive some serious enterprise and services revenue. Hewlett-Packard and IBMbetter be taking them seriously in these spaces or face the consequences.

Dell’s leadership team was aligned, consistent and confident with their content, responses to Q&A, in 1:1′s , and yes even consistent at cocktails. I met with most of the business leaders and I even grabbed (literally) time with Michael Dell and Jeff Clarke. This wasn’t the type of fake and staged consistency we have all encountered before in our business careers. I have sat in their chairs in my 20+ year PC, server, and chip career, and this was real. What was clear was that Dell is all about business markets and in big business, it’s all about software and services. Hardware is important, but where hardware is subservient to the solution, it takes a back seat. Sure, Dell is using hardware as a weapon to get service contracts, which shouldn’t be underestimated. Hardware is still vital in the mid-market business, too, but again, is a lane to future services. Oh, I also heard one “fun-fact” on services that meant a lot to me. Dell announced as enterprises moved to Dell from Perot services, they re-upped 100% of the contracts. That says a lot.

I had many very deep conversations, but one of the more intriguing conversations I had was with the lead experience designers. 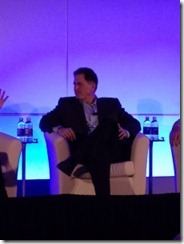 Yes, Dell has experienced designers, and from my vantage, good ones. They lead the experience for hardware and packaging, traditional in most companies but also software design and OOBE (out of box experience). More recently, they are coming off a huge success with the Dell XPS 13 Ultrabook, which is currently viewed as the best on the market. I challenged them on how they would keep the success moving forward and they pushed right back. Great design comes from the top down, else teams are arguing over saving the $.05 it took to add rubber bumpers. It is clear that the entire leadership team sees the value in design, specifically as they consider the consumerization of IT. This then leads to the consumer business.

A few months back, the consumer division was wrapped inside the SMB business. It was initial concern of mine given the huge global growth in consumer. That says a lot and certainly says that consumer is not a focus. Even though consumer contributes to 20% of Dell’s today revenue, they view it as opportunistic and will take the business where they can but won’t sacrifice the business market doing it. We won’t be seeing the “Dell dude” anytime soon. The word “consumer” was only used in the context of the “consumerization of IT”. It will be a future challenge to address the consumerization of IT with a business focus, but I give Dell a better chance than anyone. If Michael and Jeff think consumer design is important, it will be important. It’s as simple as that. Now onto phones.

One of the biggest questions I had walking into the event was where Dell stood on phones. I’ve been very clearthat I think any manufacturer who still thinks client computing is important must design and sell phones, no matter how scary that looks right now. No one wants to model their future business on what they see from Nokia or RIM. That’s when I was so surprised when they very casually announced that they would be launching phones toward the later part of the year. Dell views the phone as another corporate client at the same level as the PC, tablet, or Wyse terminal. To give it access to the entire enterprise, it needs the deployment, security, and manageability features as the other network clients. Before you snicker and feel good that your iPhone is connected to the corporate email, can you get access to your ERP, RDB or SharePoint consistently? I didn’t think so. Dell already has wins inside the U.S. Federal government based on this approach for tablets and will take this approach more broadly with smartphones. On the nuts and bolt level, Dell is taking standard Android and “hardening” it with their own proprietary software and will also be looking with Windows Phone 8 (Apollo) for those customers who want end-to-end Windows.

My final thoughts on Dell’s event revolve around Dell’s approach to penetrate the enterprise. My first litmus test I make is on strategy, and I can smell a good and bad strategyvery quickly. Dell’s strategy foots with me and it makes sense to me. Dell is the services newcomer and will use HP and IBM’s size and entrenched status against them. This is a classic judo move to turn your competitor’s strength into a weakness. Dell can approach the enterprise and make credible claims about getting in and out very quickly and using more industry standard technologies. For the IT shops that are sick of seeing other manufacturers come in and stay for a decade or believe the entrenched manufacturers are slow, this is a refreshing change. Dell has nothing to lose and everything to gain here as they move up the enterprise food chain.

HP and IBM better be closely analyzing Dell’s precise moves or they could find themselves positioned as the “old guard” as the new guard Dell walk in and gobbles up the business.