For the last few years, Apple has derailed the largest PC manufacturers in phones, tablets and high-end consumer PCs. Apple has done this with a relentless focus on the experience all the way from pre-purchase to support, and everything in-between.  As a PC manufacturer and chip supplier for 20 years, it’s disappointing to see what appears as a slow 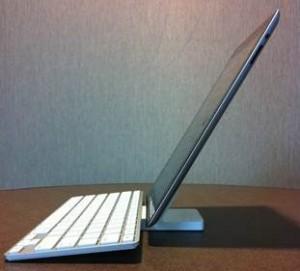 retreat from markets Apple occupies.  History has shown that a retreat to higher ground must be very carefully architected because many times, the water just keeps rising.  Look at the history of mainframes, minis, and sub $1K PCs. That once safe place turns into dangerous one as the water keeps rising.  Over time, there’s no time to go and you drown.  This is what I see the PC industry doing right now; ducking for cover and finding “safe” ground.  The problem is, there’s no place to go in devices that’s safe.  Large PC manufacturers must fight Apple or exit the business.

I remember a time that Apple barely made it into a PC competitive analysis.  Apple was looked at as an esoteric and friendly brand that was over-priced with a small niche of loyal followers.  I don’t have to spend too much time on where Apple is today. Apple is a close #2 in smartphones, #1 in tablets, #1 in personal media players, and #1 in premium priced consumer computers.  Their stock price values them at over half a trillion dollars and they have $100B of cash in the bank.

That once “high-priced PC manufacturer” turned into a consumer juggernaut.  They did this with a focus on the experience, but what many fail to realize is that through now CEO Tim Cook’s operational leadership, Apple is very innovative in the supply chain as well.  That gave Apple not only primary access to hard to acquire, leading edge components, but also blocked rivals from gaining access to many technologies.  Just look at the new Retina Display in the “new” iPad.  There is nothing like it in the supply chain at that price at that volume.  The first capacitive display in iPhone 1 is another example.  Nothing else like it.

The final piece of the equation was accessibility to a broader audience.  That’s analyst speak for low price.  While Apple priced itself out of the broader PC market, it didn’t make that mistake with phones.  iPhones, albeit earlier designs, are available for free with a subsidized carrier commitment.

Apple’s competitors have reacted in different ways and run the gamut based on the company and market segment.  I’ll focus on Apple’s larger PC-centric competitors HP and Dell.

HP, in particular, was the most aggressive, buying Palm in 2010 for $1.2B. The Palm acquisition brought webOS, smartphones like the Pre and Pixi and tablet hardware that became the Touchpad.  WebOS was very innovative in its design, particularly in the way it handled multitasking, notifications, and multi-account “Synergy”.  Devices even offered a cable-free inductive charging option.  HP’s CEO even discussed integrating webOS onto all HP’s personal computers.  I thought this was the right vision for HP, as owning an entire ecosystem was one of the only ways to deliver an integrated and quality experience from phone to tablet to PC to cloud.  Dell was one of the first movers as they launched aggressively into Android-based smartphones and tablets.  The Dell Streak 5 was ahead of its time in 2010, given “superphones” are all the rage today in the highest segment of Android. TheStreak 7 was differentiated in that it was one of the first 7” tablets in a sea of 10” tablets.

HP launched the Touchpad in July 2011 and was discontinued in August 2011.  While it had a very slick features mentioned above, it lacked important tablet basics like popular applications and services.  The Touchpad was plastic and 60% thicker than the aluminum chassis iPad 2. Plus, the HP Touchpad was initially priced on top of the iPad until in its final days was priced at $99 from its initial $499 price point.  HP exited the Palm hardware business a little more than a year after the acquisition closed, and subsequently took a $3.3B of write-off.  In Dell’s case, none of the devices caught on particularly well in consumer, even though they had some very distinct advantages over the competition. Dell still sells some of the phones and tablets today in certain geographies and enterprise and government segments, but it is clear that it’s not core to their business.

Windows 8, Another Chance for HP and Dell Against the iPad

While Dell and HP aren’t currently particularly interested going big into phones of any kind or Android tablets any time soon, as it relates to the iPad, their strategies are to leverage Microsoft with Windows 8 tablets and convertibles.  I have been a believer in convertibles for a while now, and do believe that if Microsoft can deliver an affordable, fast and fluid experience with many popular applications on Metro, this plan will work for HP and Dell.  I believe that a slick, Windows 8 tablet can be priced the same as an iPad given it could provide a tablet and desktop experience.  In premium notebooks, I believe HP and Dell will have a bigger challenge than tablets.  I know this sound counter-intuitive, but hear me out. Unlike Windows 8 Ultrabooks, Microsoft will govern Windows 8 tablets with an iron fist on experience, pricing, and positioning. If managed appropriately, this will result in a more premium positioning less apt to decrease in price. Ultrabooks, on the other hand, is a more open environment where OEMs are freer to choose different pricing levels and experiences.

At this point, neither HP nor Dell can concede any ground on client devices.  PCs are still huge for both HP and Dell.  It’s roughly a $40B year business at HP and at Dell approximately a $32B business.  So far, both have pulled back from phones and tablets.  Dell folded the consumer business into small business which I can only view as retargeting commercial, even as they launch exceptional products like the Dell XPS 13 Ultrabook.  According to Brian Caulfield at Forbes, Michael Dell himself proclaimed “Dell isn’t really a PC company”. This week, HP folded their PC division (PSG) with the printer division (IPG).  Marketing and communications, including PSG/IPG, were rolled into a central organization and all major account salespeople were rolled into the Enterprise group.  This absolutely reflects an enterprise-focused approach. When you are marketing and selling to the enterprise, centralized command and control is more important than a distributed approach used more by consumer companies. What few are discussing is how in some ways, this neither makes it easier for PSG to compete nor are their details on HP’s “client” differentiation strategy.  I am sure HP will bring that to the table, but it isn’t apparent right now.

Do these moves reflect a graceful retreat from the PC market?  Not necessarily, but it certainly appears as a retarget to commercial solutions, of which PCs are an element.  In some ways this makes sense. Financially, enterprise solution company margins are light years ahead of Windows-based PC manufacturers and Wall Street valuations reflect that.  IBM has a P/E of 15.72, Oracle 15.16, HP 8.27, and Dell 8.82.   While Apple can make 40+% on consumer products, no one in the Windows PC world has. This then begs the question…. where is higher ground?

There is no Higher Ground in Client Devices

On face-value, after spending a tremendous amount of resources in consumer over decades only to see Apple come in and do so well, it makes sense for HP and Dell to retarget to commercial market PCs.  Right?  Not necessarily.

While Apple hasn’t gone after the commercial PC market, employees are bringing in iPads and iPhones and using them in the workplace.  When iPads and other tablets increase in penetration, more are brought into businesses, and over time, iPads will have deep penetration into the enterprise.  Call it the “consumerization of IT” or “bring your own device”, it means Apple is in the enterprise.

Modularity will also have a very profound effect on this. Tablets or phones today cannot replace PCs, but that’s the current state.  I write more on how the phone could take down the PC here.  What happens as wireless displays, wireless keyboards are connected with modular operating systems and modular development environments?  Microsoft, Apple and Google are all moving to operating systems and development environments where devs will develop once and deploy to phone, tablet, PC and living room form factor.  As this plays out, enterprise employees will be able to walk into work with their phones or tablets and sit in front of their 32″ display with a full keyboard and mouse and get their work done.  The commercial “PC” won’t disappear but the delivery mechanism will change. The design point becomes a consumer phone and tablet, not a PC.

Neither HP nor Dell can move to a commercial PC “higher ground” because it won’t exist in the future.