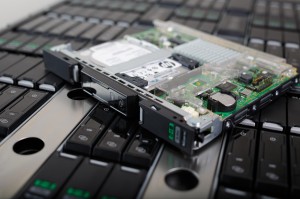 datacenters that drive today’s and tomorrow’s mobile applications, internet, big data and IoT. In its its first instantiation, Moonshot increases density, or the numbers of servers in a given space, by up to 8X. So for every rack of HP Proliant servers today, you could put up to 8X the number of servers in its place at the same power and space.  This equates to a huge cost savings in power and building space.  One of the more interesting parallels is that HP is taking a play out of the smartphone playbook to accomplish this.  Let me start with a brief review of smartphone technology ecosystems.

Today’s smartphones are powered by an SOC (System on a Chip) designed and sold by a collection of companies like Qualcomm, Apple, Samsung, Nvidia, Intel, Huawei, MediaTek and TI.  SOCs, unlike processors, have all the capabilities to run an entire phone, making capable the wide myriad of functions from texting to updating social media status, playing games, watching videos, listening to music, making and editing videos, taking and editing photos, and of course, talking.  The SOC that makes this happens is actually made up of multiple different accelerators that just happen to be packaged in one chip.

In fact, each smartphone has the following “accelerators” to accomplish a specific task, which I will GROSSLY simplify here:

As you can see, all of the smartphone functionality comes from many different accelerators.  The alternative would be to use a general purpose ARM Intel or MIPS-based processor and do everything on it.  The problem is, that this could use 20-100X the power and heat.

So what on earth does this have to do with HP Moonshot servers?

The new HP Moonshot servers take a very similar approach to smartphones as they are designing specific servers for specific workloads or applications, just like a smartphone uses an SOC. Instead of playing games or watching a video, these servers will execute specific workloads like web serving, web applications, streaming content, analytics, cloud, database and caching.  Like an SOC’s accelerators, HP will be offering different server cartridges with on-board accelerators:

Like smartphones, HP Moonshot’s design addresses specific workloads and applications with a specific accelerator.  HP packages these different accelerators in a server cartridge that can be slid in and out of the Moonshot chassis very easily.  I have actually done this and it is very easy.  It’s not like installing a PCI Express card but is more like opening and closing the door of a sport car- very fluid with a “click” at the end.

One other analogy between smartphones and HP Moonshot servers I’d like to share is in regards to ecosystem.  I think we can all agree that much of the success of Apple and Google is around their app store ecosystems.  Well-oiled ecosystems that enable growing economic opportunity for both sides of the equation work very, very well.  Without the iOS ecosystem, Apple would have a handful of apps they wrote and then pointers to web sites for other content.  We all know how horrible that would be.  Also, the iOS ecosystem enabled applications I am sure were never thought of in the beginning.  These are apps like Instagram, Snapchat, Foursquare, and Pulse.  This is a testament to the combined innovation, creativity, and ingenuity a broad and thriving ecosystem can provide.

HP is setting up an ecosystem called the HP Innovation Ecosystem (a mouthful).  Its goal is to create a hardware and software ecosystem where, like in the case of iOS, all parties win and the combined innovation creates deliverables much larger than it could on its own.  HP has a really strong start with the hardware, as yesterday, I saw no less than 7 unannounced server cartridges and am promised there are many more on the way.  HP will essentially give you the specifications for what the card needs to plug into and a company can design their own cartridge.  In fact, for some government applications, HP may never see the actual server cartridge. This type of hardware ecosystem will be very interesting to watch.

On the software side, HP has enabled multiple OS, tool and app vendors, too, with an early focus on open source Linux.  To make coding and testing easier, HP has what they call the Discovery Lab, where ISVs and developing customers can install their code on HP’s servers in Houston, eliminating the need to buy a server for development.

This is the most comprehensive ecosystem I have ever seen and I look forward to seeing some applications we would have never thought of in a closed environment.

Ironically, the smartphone and tablet phenomenon has driven the need for a radical new approach to server and datacenter designs.  It’s even more ironic that to accomplish this, HP Moonshot servers have taken a page from the smartphone playbook of executing tasks on specific accelerators and creating broad ecosystems.

Who says servers aren’t cool?  If you would like a very deep dive, I have published a white paper here.