They say time flies when you are having fun and 2017 has certainly been a lot more enjoyable for Advanced Micro Devices since 2015. Unlike financial analysts who cover Wall Street, I’m less concerned with the day to day and week to week stock price fluctuations and balance sheet as I am with extended trajectories on products, share and revenue. So with AMD, I look at the promises they have made on product, markets, and revenue and then stand back and measure them on those. I will be attending AMD’s 2017 Financial Analyst Day and I thought it would be worthwhile to look back at 2015 and see if they did what they said they would did.

In May of 2015, just after 7 months after becoming CEO, Lisa Su outlined the corporate strategy for the next few years. It was a tough 2014 for AMD with only a few stars, game consoles, thin clients and casino gaming. 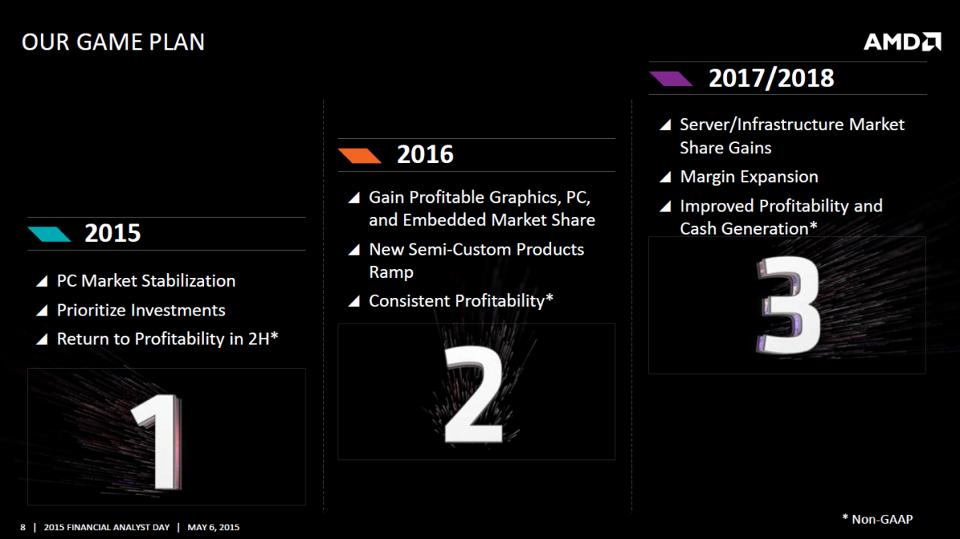 If you recall, PC’s went out of vogue at Advanced Micro Devices under Rory Read’s CEO tenure with a focus on embedded and semi-custom. So it was with some surprise to many that Lisa discussed stabilizing the PC business. It’s easy to say want to compete in places where Intel isn’t, but when that market delivers 65% gross margin, huge and only two players, it may actually be a good place. 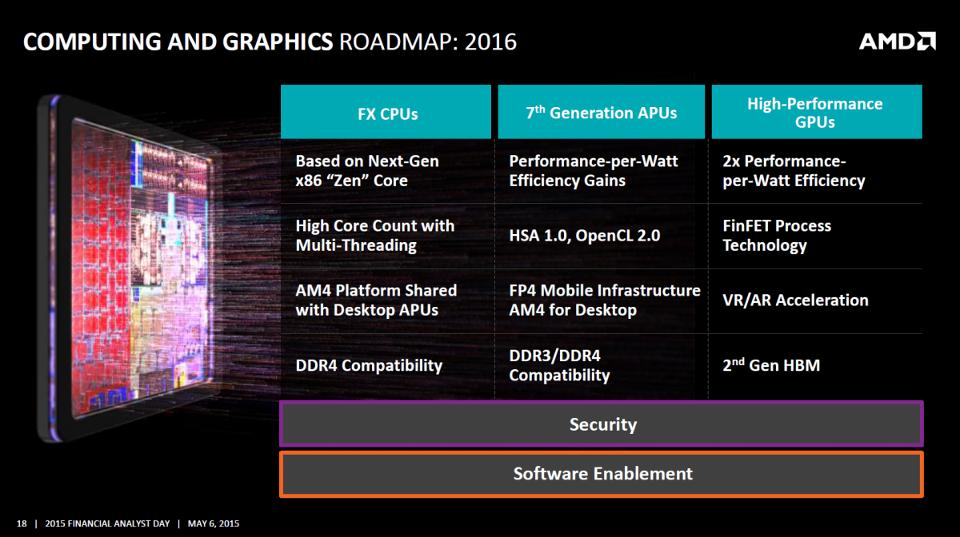 Since 2015 AMD has significantly improved the state of their PC business, including four straight quarters of double-digit year-over-year growth. That’s really good, right? AMD also landed some big commercial wins 2015 and 2016 with HP Inc., Lenovo and even Dell. Also then, while it was hard to imagine AMD with a chart-topping CPU, the company prepared for the launch of Ryzen. Two years ago no one, and I mean no one, thought AMD get back to even a glimmer of the glory days. Well they have.  Financially, C&G revenue grew from $532 million in Q1 2015 to $593 million in Q1 2017, which only includes one month of sales of Ryzen. I had expected more higher-end share out of RTG, but they did gain unit share share with Polaris. RTG is close rolling the newer high-end GPU products targeting the PC gaming and professional design based on a brand-new architecture called “Vega.” Architecture shifts are the time for disruption in GPUs and CPUs and the market is hopeful RTG has a winner.

In 2015, AMD said they were prioritizing investment in the enterprise, embedded and semi-custom business. 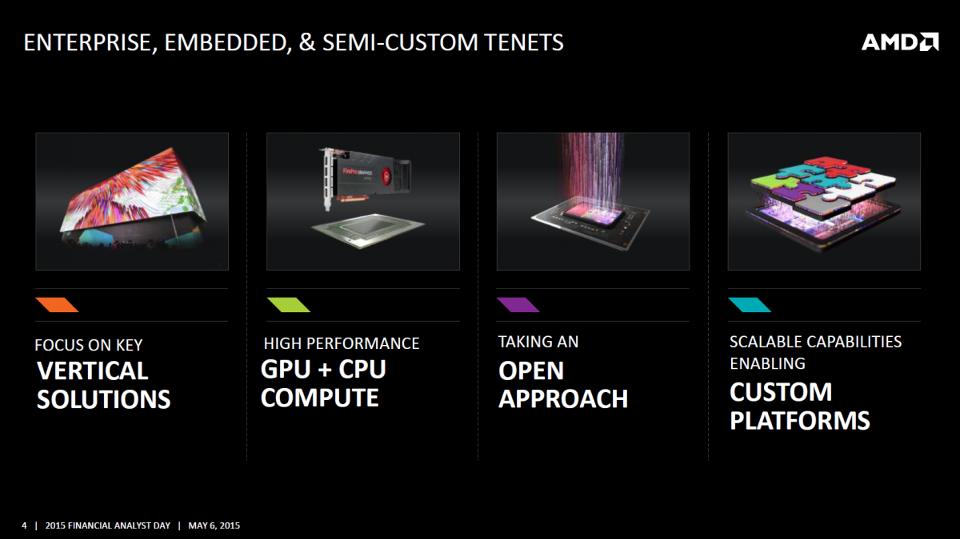 So what did they do? At near-0% server market share, AMD invested heavily in returning to the datacenter with the upcoming Zen-based “Naples” high-performance CPU for server. The company is still saying they are on track for our first Naples products to launch this quarter. I hope to hear some more details at the event tomorrow as AMD shared a ton of details. To be blunt, the semi-custom business kept the company in business, a good move by Rory Read, and since 2015, AMD has added two additional wins for our semi-custom business – the PlayStation Pro and Xbox “Project Scorpio”. Game consoles is a shining star for AMD and they are the #1 provider of graphics technology in the space.  I had wanted to see some major semi-custom wins in non-console markets but they didn’t realize. 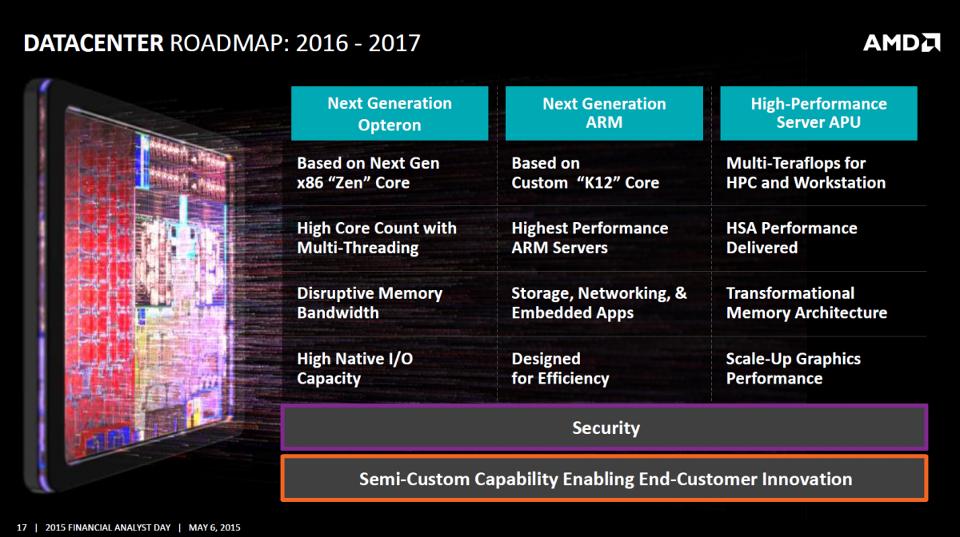 In 2015, AMD was selling real estate, leasing it back, laying off employees and sub-leasing space they couldn’t take up. I was concerned for AMD. In addition to the wins outlined above, AMD in 2015 developed a plan to improve its cash and liquidity position.

Today, AMD is in a vastly better healthier financial position.

Comparing the most recent quarter to that of two years ago, AMD has increased  their cash position, while significantly cutting debt from $2.27 billion to $1.4 billion today. If you want to get technical, 2016 was the first time I can remember AMD had positive free cash flow.

At AMD’s 2015 Financial Analyst Day, AMD said they would “lay the foundation for growth and profitability.” They talked about Zen, Vega, getting back into the highest performance spaces, and the datacenter. any way you slice it, AMD potential growth potential and they are in a much better position – from all aspects – compared to two years ago. With the “Zen” processor core they have already demonstrated  a return to the higher performance markets they had escaped years prior. If AMD can do it with “Vega” graphics architecture, it’ll be a one-two punch playing above the $199 price point. AMD’s RTG is already seeing interest datacenter GPU capabilities with Google Cloud and Alibaba but I’d like to see more details around the actual compute workloads and scale being attained before I get too excited.

For the rest of the year, AMD’s communicated focus consistently remains on launching the Naples server CPU with broad customer, partner, and ecosystem support. The server market moves much more slowly than the PC or GPU markets, so I don’t think we’ll see material financial impact until 2018. AMD’s RTG gained lower-end and mid-range unit share with Polaris which is good and now it’s time to move up the stack with Vega. RTG if you remember, announced their GPU cards for machine learning earlier this year and the company is saying they are on-track for a mid-year Instinct launch.

Ryzen desktop has been a smashing success, even though the investors somehow thought AMD recognized revenue on sale-in (3 months) versus sales-out (1 month) which prompted a stock sell-off after last earnings. Moving forward the Zen core will be going into the mainstream desktop and premium notebook markets with Ryzen 3 CPUs and Ryzen mobile APUs in the second half of the year.

If I look back on what AMD said they were going to do at the 2015 Financial Analyst Day and compare it with what they’ve done since then, the company has hit nearlyeverything. AMD doesn’t appear to be delivering a “high-performance server APU” (read: integrated graphics) and ARM servers appear on the far, back burner.  AMD followed through on the most important stuff they needed to do, and are in a much better position as a result of that commitment. AMD has done a good job in identifying and then tackling the most important, and arguably fundamental, needs of the business. Wow what a difference a few years makes. Never under-estimate the value of good leadership, execution and an understanding of how to grow the business.