As I have cited previously, human computer interface (HCI) changes have defined the winners of the last decade in the phone, tablet, and premium PC and game console markets. I believe this will continue into the future. As important as the singular technologies are the way that different kinds of controls come together as a system to deliver multi-modal input methods. This is why I am so excited about Synaptics three new technologies, ThinTouch, ForcePad and ClearPad. They have the chance to revolutionize the way notebooks, convertibles and tablets will be used in the future. Over the last few months, I got an insider’s view of the technologies, talked with the designers and HCI experts, and of course, got my hands on the technologies. I’d like to share some insights I’ve gained on the technologies.

Multi-Modal is the Future of HCI

The future of all device interaction will not be governed by a single way of interaction, but via multi-modalinteractions. Essentially, devices will take inputs in a myriad of ways, whether they are via keyboard, direct touch, voice, and even through machine vision. To not confuse the user, they will all need to work as a cohesive “system” and therefore need extensive systems integration and software work. In the next few years, this will be especially true on notebooks, convertibles and tablets. Synaptics has some incredible smartphone technologies with its InCell and TDDI (touch display integration), but I want to focus on HCI for notebooks and tablets. Let’s dive into the technologies.

Over the last ten years, Synaptics and Apple have driven the biggest advancements in touchpads. Just look at how the 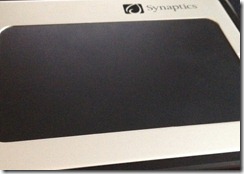 ForcePad technology removes all moving parts, is pressure sensitive, and at less than 2.8mm, is thinner than a slice of cheese. ForcePad has the ability to perform all the functions users can perform with a ClickPad, even without knowing there is pressure sensitivity, thus reducing any adjustment period or learning curve. Synaptics usability research scientists (with whom I met) have tested this and observed that on average a user with a ForcePad easily adapts to this hingeless touchpad and quickly prefers this experience over the majority of hinged PC designs on the market today. The “gesture continuation” capabilities that the ForcePad pressure sensitivity offers, provides a smoother and easier method to perform the core functions from pointing to scrolling and zooming.

By adding pressure sensing, this enables consistent interactions on any part of the touchpad and it never wears out, making it much more reliable. There’s even an auto-calibration feature that has several benefits. For the OEM it enables a consistent OEM branded feel & behavior across models, that is something that is not in PC notebooks today as the hinge mechanism in today’s ClickPad is developed by the OEM’s choice of ODM, using several ODMs, and OEM may have different feels for the ClickPad even if using the same supplier because the ODM designs the hinge. Next the auto-calibration feature has the ability to compensate for chassis-flex, with thin and light notebooks, some can flex and activate a click just by picking the notebook up with one hand, ForcePad can detect this behavior and reduce accidental clicks. Lastly, while the OEM can pre-select the desired feel, this auto-calibration feature can enable a user to personalize their response, adjusting if for how firm or light they may want.

Its ability to “feel the force” also opens up new usage models where by adding a third, relative dimension, a user could conceivably replace a joystick to play a game, eliminate the need to choose new brush sizes in a paint program, or even eliminate annoying, slow scrolling on long web pages or documents.

The ForcePad, codenamed “Jedeye” in the a User Interface Software and Technology conference (UIST) competition was selected for the student software development and is expected to look at innovative methods to provide innovative methods to HCI through the addition of pressure sensitivity.

Users will need to get used to the lack of a clicking sound and feel, but as the entire industry learned, clicking is optional. As we learned from Apple and BlackBerry phones, what many thought would be an issue wasn’t at all, and those who sat in the past learned to regret it. Now on to the keyboard.

There hasn’t been a whole lot of innovation on keyboards over the last 20 years. Even while some of the best OEM 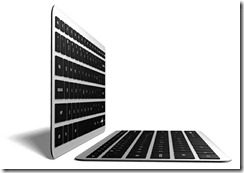 companies like Lenovo and their customers pride themselves with the ThinkPad keyboard performance, it is open to the same issues as all scissor-based mechanisms. That is to say, they are more open to break and become full of gunk. Have you ever had a key pop off and have to replace the entire keyboard due to a scissor mechanism?

ThinTouch removes the entire mechanism and replaces it with a capacitive touch enabled mechanism that is 40% thinner and brings several benefits. First, by removing the scissor mechanism, they keyboard should be lighter, thinner, and backlit keyboards should be more effective, brighter and require less battery draw due to the design without a scissor mechanism and also more reliable and manufacturable according to Synaptics. Secondly, keys are capacitive, there is the potential to enable personalization and turn on pressure based controls and even near-field “air gestures” into the mix. Imagine if you had a gesture to “fling” an image from your laptop to the TV by gesturing a certain way without even touching the keys. Reading a book, air swipe to turn the page. Once you make the keyboard, capacitive, the sky is the limit. Now onto the touchscreen.

Synaptics got a bit of a late start in the touch display controller market but they are making up for it by expanding their controller line that supports windows 8 touch specifications from 12” now up to include the13.3, 14.1, 15 and 17” displays. And, in the future, but evidenced today in the smartphones up to 5”, tablets and convertibles could move to InCell, which removes and entire discrete sensor, thinning the product, improving the optical qualities and increasing performance. The ClearPad Series 4, TDDI smartphone technology, shrinks the number of controller from two to one; integrating Touch with the actual Display Driver IC this will significantly improve responsiveness while lowering cost.

For now, Synaptics biggest advantage in tablet and convertible touch display controllers as it marries up perfectly with ForcePad and ThinTouch. And that happens to be one of Synaptics’ biggest advantage, which is they don’t stop at the hardware. Their offering is the system and total HCI experience that is the blend of hardware, firmware, software, and the test tools to deliver this multi-modal interface solution.

Unfortunately for PC makers over the last few years, Apple has run away with the premium-priced notebook and premium-priced all in one market. Ultrabooks could change this, but we won’t know until after the holiday selling season. Ironically, some Ultrabooks still come with cheap touchpads and uninteresting keyboards.

I believe that many PC makers will quickly adopt these Synaptics technologies to differentiate themselves from Apple and from each other, and some will even drive them across mid-range product lines, too. Unfortunately, some OEMs will continue to count pennies as they lose dollars, as the price between high quality touchpads and mediocre quality is around one dollar. When Apple comes out with their next generation of HCI, they will wish they had invested that dollar.