As our world becomes more and more wirelessly connected, there is a never-ending demand for more spectrum to accommodate the bandwidth needs of all our devices. This challenge was coined by Qualcomm in 2013 as the “1000x challenge”, saying that wireless networks in the future will require 1000x the capacity of today. As a result, many companies in the wireless industry are looking for ways to meet these increased capacity demands, and one of those ways is utilizing unlicensed spectrum. This effort has been primarily led by Qualcomm, but has gained adoption across the wireless industry as a way to alleviate the stresses on the existing networks utilizing licensed spectrum.

The spectrum challenge forces carriers to be creative

The need for more spectrum is a never ending one and currently the mobile carriers are generally starved for the spectrum that they need to deliver the faster and faster speeds that today’s modems are increasingly capable of. This need is driven by consumer’s insatiable demand to do more with their mobile devices like phones and tablets, plus the addition of new devices like wearables, connected cars, and IoT (Internet of Things) categories like smart cities.

Carriers currently operate on licensed spectrum in small blocks of up to 20 MHz and as small as 5 MHz, however this is generally not enough to deliver a good amount of bandwidth to most customers in most countries. The reason for this is because a lot of the frequencies that mobile carriers operate at are also the same frequencies that TV stations used to operate at or currently operate at. As a result, there is a constant wait for the government to free up these spectrum blocks for use by mobile carriers.

Government procedures vary wildly from country to country and so do the frequency blocks that they make available to carriers. Additionally, not all frequencies are used the same in every city, which further complicates the spectrum problem. When government spectrum does become available, it can cost billions to tap into.

Unlicensed spectrum, one of many solutions

The proposed solution around this problem is the use of LTE in the unlicensed spectrum also known as “LTE-U”. LTE-U is not the end solution to the spectrum problem, but merely an alternative source of spectrum in regions or markets where there may not be much to work with. The unlicensed spectrum operates within the same frequencies where Wi-Fi and many ‘open’ wireless standards exist. So, naturally, one could also accomplish similar results with LTE/Wi-Fi link aggregation, however this solution has less range than LTE-U and may not be as popular among carriers. LTE-U is designed to make the most of the available unlicensed spectrum and to not interfere with existing Wi-Fi installations and access points.

There are specific features within LTE-U that are designed to ensure that it does not cause problems for the existing Wi-Fi ecosystem, including things like Adaptive Duty Cycles, Listen Before Talk and conformance testing that Qualcomm expects to be more rigorous than Wi-Fi. LTE-U is already a part of the 3GPP Release 13 standard, which is expected to be released in 2016, which aligns with Qualcomm’s expected chipsets deployments in both their small cell and mobile SoCs with LTE-U. However, Qualcomm is not waiting until then and is trying to enable early deployments through technologies like adaptive duty cycle. Early markets like the US, Korea and China already have the right spectrum allocations to enable this before Release 13 in 2016 with such technologies, while others will have to wait later until 3GPP Release 13 where they will still have to use Listen Before Talk in order to be compliant with regulations in places like Japan and Europe.

LTE-U is also referred to by the 3GPP as LAA (the 3GPP standard name for unlicensed spectrum) and many carriers refer to it as their implementation of LTE-U in conjunction with licensed spectrum. 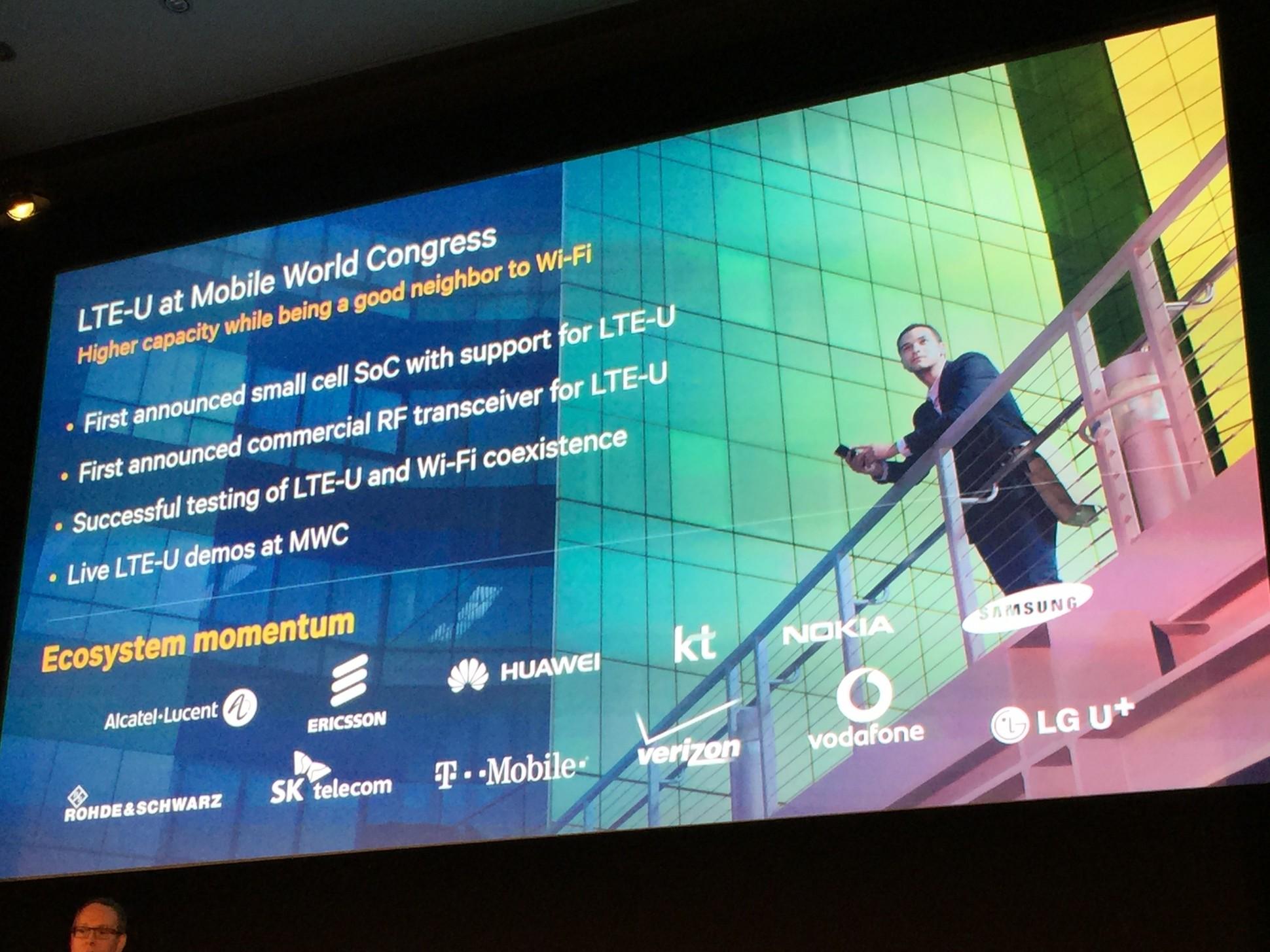 Qualcomm made a big LTE-U splash at this year’s MWC (Credit: Patrick Moorhead)

From the demonstrations that I was shown at Mobile World Congress (MWC), there have been clear advantages to Wi-Fi as a result of the use of LTE-U. Qualcomm showed how adding LTE-U access points to crowded Wi-Fi environments can actually steadily increase the overall performance of the aggregate networks. Qualcomm showed maximum configurations of 8 APs (access points) starting with all Wi-Fi and eventually reaching 4 Wi-Fi APs and 4 LTE-U APs which yielded the greatest overall bandwidth. They also showed how an individual LTE-U AP has overall better performance than a single Wi-Fi AP due to Wi-Fi crowding. This means that simply switching a single Wi-Fi AP to LTE-U not only helps the users connecting to that small cell, but it also decongests the Wi-Fi network overall and results in faster speeds for all those around using Wi-Fi for data or for link aggregation with LTE.

Qualcomm’s small cell and mobile SoC solutions for LTE-U are specifically designed to both complement and coexist with Wi-Fi in ways that benefit everyone. The carriers get more spectrum to work with which ultimately results in faster speeds for consumers and it also can help reduce Wi-Fi interference, which admittedly isn’t much of a problem right now in the 5 GHz band, but will be in the future as more than more APs transition to 802.11ac. This will result in better speeds for the Wi-Fi users as well as those that are connected to an LTE network and are using LTE-U for supplemental bandwidth.

There have already been quite a few major announcements from major players committing to LTE-U such as Verizon Communications which recently announced it had completed tests for 2016 in the 3.5 and 5 GHz unlicensed spectrum. T-Mobile US has an even more aggressive commitment, with their CTO Neville Ray committing back in 2014 that they would be using LAA (License Assisted Access) in the 5GHz spectrum band as early as the end of 2015. NTT DoCoMo and Huawei have already started joint testing of LAA and are pleased to announce that they have already seen successful field results.

However, LTE-U and LAA are not without opposition as the Wi-Fi Alliance has voiced some concerns about the risks of LTE-U and LAA coexisting with Wi-Fi in the 5GHz band. However, Qualcomm appears to have already addressed many of these concerns and the 3GPP Release 13 standard appears to further address them for the longer term. Additionally, Qualcomm is also a huge player in the Wi-Fi market and it would be foolish to assume that they would jeopardize their Wi-Fi business for the sake of LTE-U. They have clearly shown coexistence is not only possible, but also beneficial to Wi-Fi and LTE users alike.