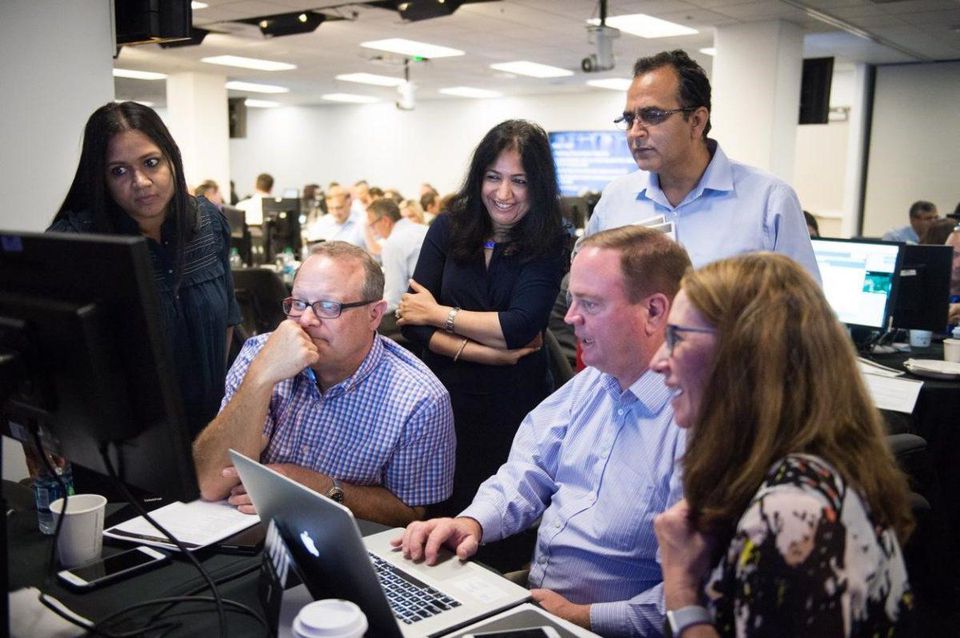 Cisco leaders use a simulator to see effects of various business decisions they make.   CISCO

Before I created my company Moor Insights & Strategy, I worked at some large tech companies like AT&T, NCR, and Compaq in the 90’s and AMD in the 00’s. I am always fascinated by how some of the larger tech companies stay innovative (or not) as they grow from startups into behemoths.  Related to innovation, one of the biggest challenges large technology companies have is attracting, recruiting and retaining top talent, particularly in Silicon Valley.

I have seen a few large Silicon Valley technology companies use unique strategies and programs to attract and retain that top talent. Last month, I wrote about Cisco Systems’ “People Deal”, its mutual agreement between its employees and the company. It was shorthand for “what” the company asked of its employees and “what” the employees could expect from the company. I thought that it was cutting edge in the bottoms up manner in which it was created, its maturity, but also by some of the improvements that had been made based upon it. You can check out my take on the People Deal here.

My article created a lot of conversation from around 10,000 Forbes reads, and even a few Cisco employees reached out to thank me or to provide me with constructive criticism on the article. Within a few weeks and a few conversations with Cisco senior leadership, the company invited me to personally attend what it called “Leader Day,” Cisco’s global event to bring together 9,000 leaders across 49 locations, simultaneously, from around the world. Cisco conducted Leader Day last week, and I attended a few parts of it.

Cisco has 74,000 employees, and 10,000 are considered people managers. Cisco believes this community is critical and that it’s important for them to come together, to learn, and to align as one team, at the same time. Cisco also has a strong belief that as they become stronger as leaders, they create stronger teams, and that creates a stronger Cisco. This should, in turn, help retain and attract top talent.  This makes common sense, right? It also makes a lot of sense to me to get leaders on the same page on things like mission, vision, objectives, strategies in the context of the People Deal. From experience, I can tell you that this is easier said than done, particularly in this age.

While the People Deal was aspirational and explained the “what,” Cisco told me that its employees were asking for some of the “how,” so the company created a set of core “Principles” that explained the “how” and could be used to help define its corporate culture. Like the People Deal, the core Principals were derived from a bottoms-up process.

If these seem basic to you, good. I think principles should be simple to understand and act upon. They also need to be specific and bracketed enough that everyone’s behavior cannot be appropriate based on them. I believe they should offend some; else they likely have no meaning or intensity.

Cisco let me interview a few employees, too. Some things I really wanted to know first-hand was “why” some people came to Cisco and “why” some of them stayed.  I know two people don’t fully represent the full employee base, but that’s missing the point. I wanted to hear some of the people stories.

I got a chance to sit down with Chief Communications Officer, Oliver Roll, who came over from VMware to Cisco Systems a couple of years ago.  I asked him about what attracted him to Cisco. He liked the company’s big bold ambitions and the plan to change a company of significant size into a more agile company, and that he felt a sense of urgency to make all this change. However, it was one thing Oliver shared with me that stuck with me, and that was that everyone he met with at Cisco seemed very congenial and collaborative.

I pressed Oliver on the “during the interview niceties” outlined above, and he told me a very personal and touching story how a leader he had never met heard about his daughter’s severe genetic condition and rallied to raise money with her team, which Cisco matched. He also appreciated that Cisco, even though he had just started in his job, gave him the time he needed to get things squared away. He reinforced that this caring behavior permeates the company and cited TacOps, the Cisco disaster strike force which is currently helping hurricane-ravaged areas and which I wrote about here. Many times, employees rank companies based on stock options and pay, but how can you place a value on this kind of support? It’s immeasurable.

I also got a chance to speak with Bryan McCarthy, a people manager of business development. McCarthy has been at Cisco for 13 years after the company he worked for, Webex, was acquired.  Bryan is also one of Cisco’s “People Ambassadors” meaning he gets to meet with senior leadership to share the general employees pulse directly to the top. Bryan struck me as the classic “serial entrepreneur” type having sold a few companies.  Bryan’s story was interesting as he spent a lot of time building up Webex, and like other entrepreneurs, saw many of his counterparts depart and wondered if he should be doing the same. I see this all the time with serial entrepreneurs. He referenced one person who pulled him aside and showed him the Cisco positives and ways to innovate and get things done. What struck me was what many know but forget and that was that one experience with that one person made such a huge difference to Bryan. I was also wondering, what if that interaction had just been an email?

The conversation with Bryan got me thinking more about the Leader Day scenario planning where leaders have to make business decisions based on different scenarios and can see the resulting business metrics.  In a scenario focused on employee communications, leaders have the choice to do face to face, a Webex call, a phone call, email or stand-up presentation based on different challenges thrown at them. After the scenario, the methods are critiqued, and tools are suggested to help in the future.  I wish I had training like that in my big company past as I am sure I would have been a better leader. My personality favored emails where in certain situations, face to face would have been better. 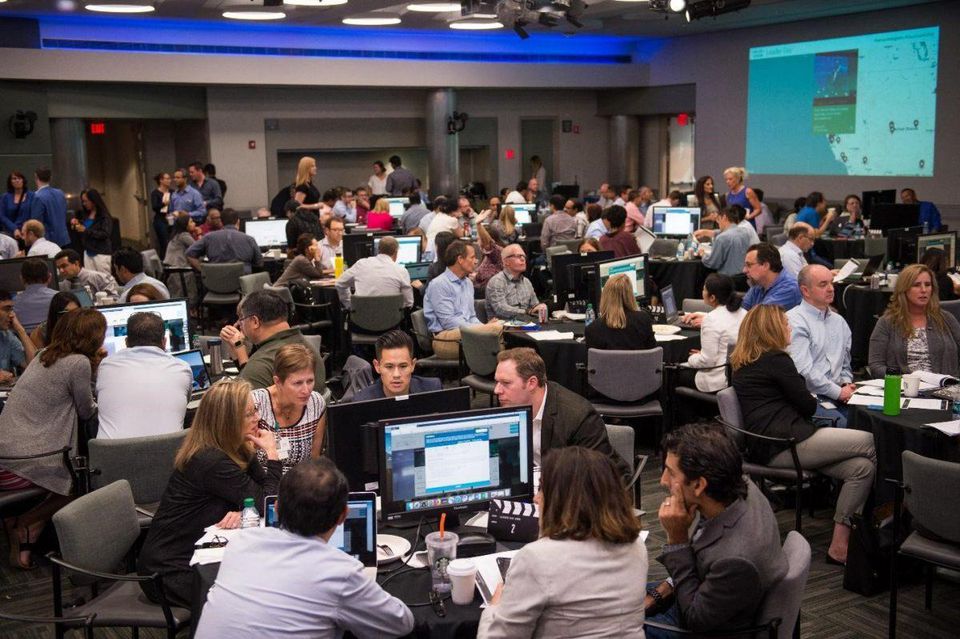 Business simulations were a big part of Leader Day.   CISCO

As I have run a small business for nearly a decade, it had been years since I had attended any kind of large group event like this. While Leader Day was simultaneously happening at 49 other locations, I attended portions of San Jose’s which was co-hosted by EVP/CFO Kelly Kramer, David Goeckeler, EVP/GM, Networking and Security Business, and Charlie Johnston, SVP of Human Resources. CEO Chuck Robbins was in Singapore, Amy Chang, SVP/GM, Collaboration was hosting from another San Jose campus location, and Fran Katsoudas, EVP and Chief People Officer, hosted from Dubai for a “follow-the-sun” approach to Leader Day.

In San Jose, where I attended, the first thing I noticed was the high energy level and that the environment was dynamic.  This was not your grandfather’s HR meeting. On each wall, there were real-time Twitter feeds from all parts of the world, showing tweets from everywhere that was still awake. As I sat there, I could see live tweets from those locations in the U.S. and Western Europe and even in the Middle East who must have been up early. 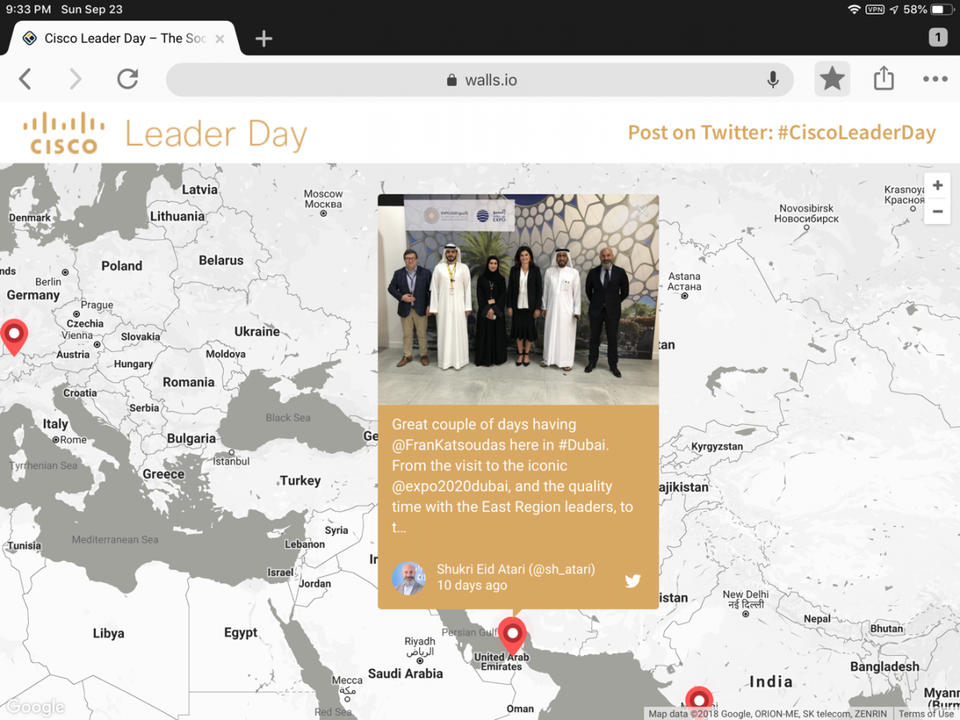 While Cisco acknowledges the ultimate measure of something like Leader Day is if it moved the needle from the leader to the employee, the initial metrics looked positive. I got the chance two days after Leader Day to talk with Chief People Officer Fran Katsoudas right after her return from Dubai, and she shared some of the preliminary Leader Day metrics with me:

These numbers look good; some were a lot higher than I would have expected and do give some room for growth. I’ll admit, I was surprised Cisco let me share these preliminary numbers given they weren’t all in the 90s, but that shows me the importance of the company’s transparency. Cisco literally said “yes” to every request I made.

While I am now a small company guy, it was a great experience to go in and see one way a large tech company, Cisco, helps to attract and retain top talent by investing in forums like Leader Day to get its leaders aligned on what they should be doing and how they’d like to see it done. Unlike some of the younger corporate tech cultures I have experienced in Silicon Valley, Cisco’s is mature in that it communicates to employees what it wants, what employees should expect back from the company, and how they’d like to see it done. This is… well… like adults operate. I thank Cisco for letting me inside the leader crucible and allowing me to share everything I wanted to share and look forward to diving into some of the tools Cisco uses to manage the day-to-day.

Note: Moor Insights & Strategy writers and editors may have contributed to this article