In my career as an analyst, I run across a lot of new technologies and have a lot of people trying to get my attention on their “next big thing”. One of the biggest mistakes entrepreneurs make is that they forget that they need to be solving known or unknown problems with their new inventions, instead thinking that flashy marketing or technology for technology’s sake is the way to go. I met up with a company called HearNotes, who are developing wireless earbuds that address many of the problems with today’s wired and wireless headphones and earbuds. On a product to product basis, the HearNotes promise has the potential to give folks like Apple’s Beats, Bose, Sennheiser, JayBird, SOL Republic or Sony a run for their money in headphones. Let me provide some background first.

If you’re anything like me, the first thing you’re doing as you get in the car is untangling your headphones. I make calls, listen to podcasts, or listen to some music, but I first have to detangle “the mess”. The same goes for exercising. It’s funny, when we get done using headphones we attempt to carefully wind it up as if this will help keep it from tangling again. It never works.

Then when I do get my headphones untangled, they get in the way. Daily, I rip my headphones out of my ear with my car’s seatbelt, reaching into the back seat, etc.  When I go running, I have to stick the cables down my shirt so they don’t bounce up and down, but the cables are still gnawing on my ears and I’m constantly readjusting. The solution is a Bluetooth headset, right? Not so fast. 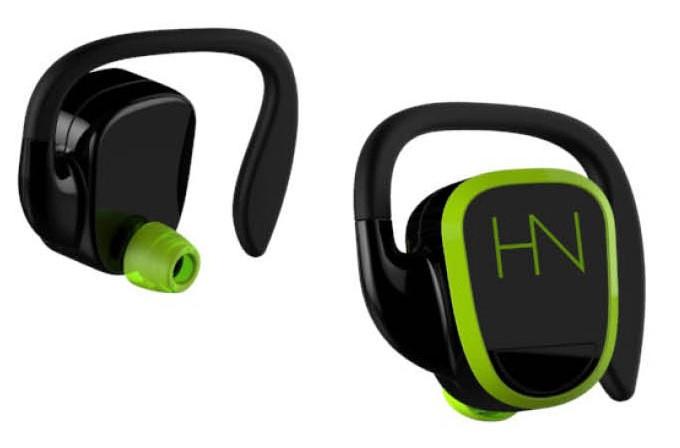 If there’s one thing that I can get universal agreement around in focus groups is that consumers think Bluetooth audio stinks. While consumers appreciate the pervasiveness of Bluetooth, they also offer unaided that pairing is a complete nightmare, when pairing is complete it’s an unreliable connection, and for audiophiles, they think the audio quality is too low.

Yes, Bluetooth has improved over the years, but its fundamental problem is that it’s trying to satisfy way too many use cases. Bluetooth is used to move large files between PCs and phones, is used by game controllers, to transmit data between health devices, used in cars to do hands-free calling and move address books over from the phone to the car, in GPS receivers and of course, wireless headphones, headsets and earbuds. As you can see by the wide use cases, Bluetooth has to satisfy very different data densities, security profiles, latencies, and power sources.

This makes it sub-optimal for audio, which is why Kleer as developed by Microchip Technology.

Kleer helps solve many of the Bluetooth audio issues

Kleer was developed by Microchip Technology as an alternative to Bluetooth to first improve the audio quality which then subsequently helped on power, distance, and battery life. According to Microchip Technology, Kleer enables lossless, 16-bit, 44.1 KHz, 480 Kbps stereo audio, while Bluetooth only carries 201-329 Kbps sub-MP3 quality audio, driven primarily by its Sub-Band Codec (SBC) lossy compression techniques. Sure, adding the aptX CODEC to Bluetooth helps, but you have to have it on both ends of the pipeline, and not many have it on the music player or phone side of the equation. Kleer’s high reliability comes from the fact that it only needs to find one out of 16 narrowband (<3 MHz) channels while Bluetooth needs to find at least one middleband (20MHz) channel, which makes Bluetooth less reliable, harder to coexist with 2.4Ghz WiFi networks, baby monitors, and even ZigBee-based home automation networks.

Kleer can also work well in video applications and video-game use cases as audio latency is between 45-20 ms, meaning audio and video are synchronized. Bluetooth can’t do this as it has 3-6X the latency at around 120ms. Finally, there is battery life. According to Microchip Technology, Kleer consumes 30mW of power, 5X less than Bluetooth headphones, and when you compensate for quality, 10X. You can find Microchip Technology ’s white paper here.

HearNotes- too good to be true?

When HearNotes first described to me their “Wirefree Earbuds” promise, I have to admit, I was a bit skeptical. They were a small startup getting money off of Fundable like thousands of other crowd-funders. But what was impressive is that they were a finalist in Staples-backed crowdfunding contest and I liked that their CEO, Patrick Donohue, was a concert-class pianist and in the financial services industry. This guy had to “get” audio and know how to make money, right?

What HearNotes wants to do with their Wirefree Earbuds is to combine the benefits of wireless with the quality of a wired audio experience and make it very, very easy to charge. I think this is a very good goal to go after as it solves all the challenges I listed above with current headsets.

One of HearNotes’ secret weapons is that it uses Kleer technology, as I described above in glorious detail, which gives it, right off the bat, a higher quality and more dependable audio stream, long range, without pairing nightmares. HearNotes can be used with a phone, a media player, a tablet, a video game console, a stereo system, pretty much anything you could attach a standard headphone audio cable to. This is dramatically different from a Bluetooth solution, which are none of these.

As for battery life, when I asked how long HearNotes would operate, Patrick told me he is expecting four hours. Sure, 10 hours would be great, but it’s just a reality when you have such a small package, just 13mm tall and 16mm deep. What’s great is that HearNotes comes with a portable, inductive charger, which means that all you have to do is set them in the charging tray and walk away, with no need to plug in a kludgy and gangly micro-USB cable. I’ll be interested to know how long it takes to charge them but know for sure inductive charging is the future in IoT.

Patrick told me that HearNotes can be ordered now off of their website for $279 with delivery in Q1 of 2015, but the price will increase to $350 as shipments commence with availability at “major retailers”.

I haven’t used HearNotes yet, but as I receive a set in the next few months, I will let you know how they perform for me and will of course update this article if anything changes. If you are out there looking at headphones from Apple’s Beats, Bose, Sennheiser, Jaybird, SOL Republic or Sony, and don’t need them by the holidays, you may want to check HearNotes out. The HearNotes gang is onto something very valuable here.