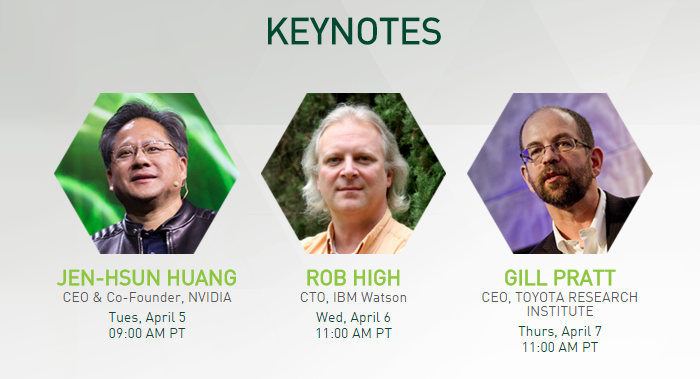 NVIDIA’s GPU Technology Conference (GTC) originally started in 2009 and competitors perceived it as a self-serving show to push the company’s own GPU programming language, CUDA. Well, years later CUDA has caught on and GTC has become one of the premiere events in the world where the highest performance GPU technologies and research are discussed. It’s still underwritten by NVIDIA and funded mostly by ecosystem partners, but not necessarily exclusionary. Over the years of GTC’s existence the conference has served as a pretty good signaling of what is to come in the current year and years beyond when it comes to high performance graphics. In previous years, NVIDIA talked about the flexibility of the GPU in HPC (high performance computing) and the relevance of GPUs in automotive and we are starting to see all of that come to fruition. More recently, we have started to see GPUs start to play more in neural networks, deep learning and artificial intelligence (AI). This year’s show promises to bring many of these trends together and introduce new ones as well.

GTC 2016 is at the epicenter of what many people, including me, think are the most exciting and sexy trends out there today that are literally dominating many of the headlines and industry discussions. This year sees those trends being turned into different categories of sessions at GTC:

The conference, like every year, will also have major keynote speakers and will be held in San Jose. Last year’s show had people like Elon Musk come on stage and talk about autonomous driving with NVIDIA’s CEO Jen-Hsun Huang. Jen-Hsun Huang also showed off new products and technologies from NVIDIA like the Digits Devbox based on the also announced Titan X. They also had some of Baidu ’s Deep Learning researchers demonstrate the power of Deep Learning on NVIDIA GPUs. This year’s show, like every show before it, will once again have NVIDIA’s CEO Jen-Hsun Huang presenting the company’s latest innovations. While it isn’t quite known exactly what NVIDIA will be showing off in terms of products, I believe there is a very strong likelihood that NVIDIA will talk more about Pascal this year, following up on last year’s announcement. Since Pascal is a 14nm FinFET-based product, there is a strong likelihood that if we see any product this year, we will hear about it at GTC 2016. These GPUs will very likely power NVIDIA’s next phase of computing which may be paired with their partners in the OpenPOWER Foundation.

NVIDIA is having IBM’s Rob High, an IBM Fellow and Vice President and CTO of IBM’s Watson Solutions IBM Software Group. He has the responsibility of driving Watson Solutions’ technical strategy and thought leadership. While it isn’t quite clear what announcements he’ll be making during his keynote, it seems quite clear that it will very likely include a lot of the cooperation between NVIDIA and IBM inside of Watson to show how Watson is improving people’s lives and the knowledge economy. It will be really interesting to see more use cases for NVIDIA’s Deep Learning capabilities and how IBM’s AI is able to harness the power of NVIDIA’s GPUs to accelerate the performance and accuracy of the answers and solutions that Watson provides to IBM’s Watson customers. IBM’s strong suits with Watson are AI and speech, so I expect Rob’s keynote to be pretty heavy on those two topics. His keynote should provide more proof points for NVIDIA’s push into Deep Learning and AI and could provide more insight into where those fields are going in the future.

Following Rob High will be Gill Pratt, CEO of Toyota Research Institute. Dr. Gill Pratt worked for DARPA prior to joining Toyota Motor Corp. (Toyota) Research Institute in 2015. His primary field of interest is robotics and intelligence systems with a focus on interfaces that significantly enhance mobility and manipulation as well as the application of neuroscience techniques to robot perception and control. The expectation is that he will also talk extensively about AI and how NVIDIA’s advancements in GPU technology allow for advancements in AI that enable improved self-driving vehicles and other forms of AI. His recent move from DARPA to Toyota Motor Corp. also signals the maturing of the Deep Learning technology sector from a research field into a practical one that is likely to be implemented in places like cars. The expectation is that we will also hear more about Toyota Motor Corp’s efforts in robotics and how the company is using advancements in AI and computer vision to improve people’s lives and interactions with machines.

The GPU Technology Conference is also home to a few sister events that supplement the main show. These include the OpenPOWER Summit, Emerging Companies Summit, Early Stage Challenge and China in Focus. Each of these events supplements GTC in different ways, helping to bring new and interesting companies into the GPU technology arena and exposing them to the already diverse and well informed audience that already attends GTC every year. NVIDIA has done a fantastic job of organizing these GPU Technology Conferences every year since its inception and I expect this year’s to be no different and to once again predict the future of where NVIDIA sees GPU technology moving.

If you are in the very least interested in the future of the highest performance GPUs or GPU computing, this is not a show to miss. NVIDIA’s GTC 2016 will be held from April 4th-7th 2016 at the San Jose McEnery Convention Center in San Jose, CA. Hope I will see you there.