On July 23, Motorola and Verizon announced their new line of Droid phones, the Droid Ultra, Mini, and MAXX.  Three of the features they stressed  the most in their new phones were “up to 32-48 hours battery life”, case configurability, and what they called the “Motorola X8 Computing System” which is said to enhance always-on functionality.  The Motorola X8 Computing System was by far the most confusing and mis-reported elements of Motorola’s and Verizon’s announcement, with multiple outlets reporting conflicting facts about the X8.  So what exactly is Motorola hiding with the X8 Computing System and why weren’t they more clear with the facts?  Let’s start with what Motorola communicated at their launch event. 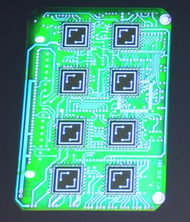 During the Motorola launch event on July 23, the company characterized the technology as the “Motorola X8 Computing System”.  It wasn’t described as a chip or as an SOC, but a “system”.  This is the first time I’ve ever heard something described like this and is very confusing.  The picture of the X8 was confusing, too, which I believe shows a fake PCB or SOC package with 8 pads, 4 on each side.  The picture communicated well that there were 8 processors, but I believe there is no way it was authentic. This makes the X8 look like one piece of silicon, or an SOC.  Most phone makers like Apple AAPL +2.6% are very clear with their descriptions and describe exactly what is inside their phones as “chips” or “SOCs”.  Additionally, the word “Qualcomm QCOM +0.05%” was never used during the event, either, nor was it on the Motorola website at first, which has significance as I will point out later.

The press then described the X8 Computing System exactly as Motorola presented it at the launch event, which was that Motorola created their custom SOC or chip with 8 cores, which would be great… if it were true.

If you don’t think people were confused and everything was crystal clear, here are just a few examples of how the X8 was described:

Only after ArsTechnica ran an article entitled, “Motorola’s 8-core chip gives us a lesson in marketing-speak” did the details start to emerge.  Ars ran a benchmark which listed the Droid’s configuration, clearly showing clearly that the phone was based on the Qualcomm Snapdragon S4, which is commonly found in 10s of millions of smartphones around the world.  Then the press jumped on that, now referring to the X8 as based on the S4 but with two custom Motorola cores for contextual computing (sensor hub) and natural language.  Motorola then added the following to their own website:

Why didn’t Motorola just say that it used the Qualcomm S4 at the launch event?  Why did they show what looks like a fake PCB/package, making it look like it was one chip with all that functionality?

Sascha Sagan’s PC Magazine interview with Motorola engineering SVP Iqbal Arshad added some extra detail but added some more confusion. Sagan reported that, “The X8′s CPU is, basically, a 28nm Qualcomm S4 Pro running at 1.7GHz. Motorola has customized the chip’s firmware, though.” That custom firmware statement is just bizarre based on my 20 years dealing with chips. Every phone manufacturer customizes firmware of a phone to a certain point, but no one modifies the base level of the Qualcomm IP.  To add a little more mystery on the two specialized chips, in the article,

Arshad “declined to say where Motorola got them from, or who manufactured them.”

Again, odd.  So what is it with all this secrecy, seemingly fake PCB/package shots, and confusion?  I believe its all about who gets the credit and maybe a bit of a marketing challenge.  Having planned over 100 product launches in product and corporate marketing, I understand the pressure of “the launch”.  With Google GOOG -0.65% HQ breathing down your neck, you’d take some chances, too.  You see, Motorola wants to get most of the credit for themselves and not share any of it with Qualcomm, the “secret” vendor that developed the two specialized chips, or the “secret” vendor who manufactured them.  The marketing challenge is to communicate something that seemingly isn’t a chip or SOC.  I have empathy- I’ve been there in Motorola’s shoes.

The problem with the approach and execution is trust.  When phones or chips get launched, the tech press and analysts will bare with getting marketed to, but want to know the facts, too.  In fact, doing good marketing is appreciated by the press and analysts, but the facts need to come out alongside of the spin.  If not, a lack of trust starts to build.  The way the X8 was communicated projects a lack of trust, not excitement.

You may be thinking, “so if you’re so smart, Pat, how would you do it?”  Well, I would have positioned the “system” as the holistic combination of the Motorola value-adds, not the Qualcomm + Motorola additions.  I like to think of value-adds as “the special sauce” or the “magic blue crystals that make your clothes whiter”.  The Motorola “system” would have been the two special cores and the software that made it all happen, and not trying and take credit from Qualcomm.

We still don’t know exactly what the X8 is.  As soon as the Droid ships, it will be torn apart by iFixIt undoubtedly and we will most likely know what is really inside, with real, not what appear to be fake die shots.  Going forward, my wish is that Motorola would take credit they deserve, give credit to those who deserve it, but most of all provide the facts alongside the spin.